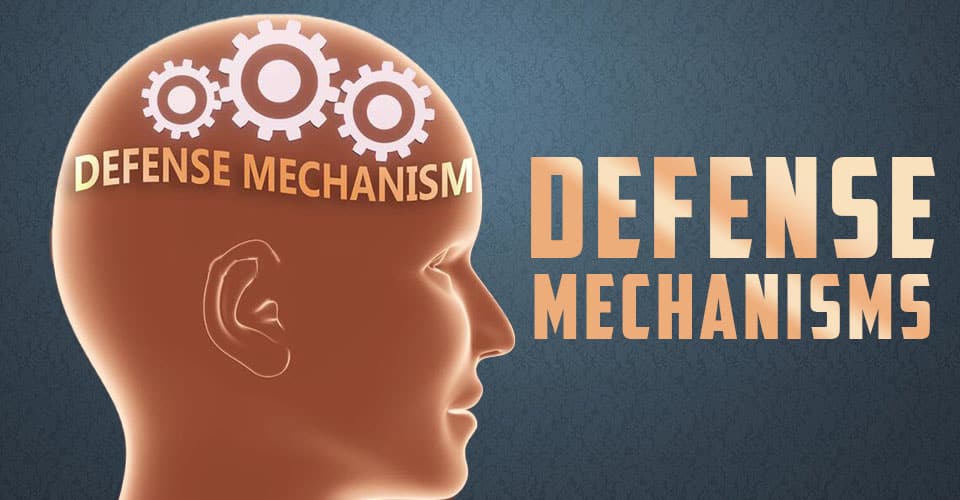 Defense mechanisms are psychological strategies or unconscious actions that humans use to shield themselves from rising anxiety or troubling feelings. These are a part of everyday life and individuals engage in some form of self-deception at least some point in their lives.

What Are Defense Mechanisms?

It refers to unconscious tactics used by individuals to protect themselves from troubling thoughts or feelings. “Defence mechanisms are mental operations that are involuntary and unconscious and contribute to reduce internal and external stresses,” explains a 2005 study 1 . In other words, defense mechanisms are practices that people use to separate themselves from unpleasant events, actions, or thoughts. Such psychological strategies enable individuals to create a distance between themselves and threats or unwanted feelings, such as guilt or shame. While these mechanisms are not genetically harmful as they enable individuals to navigate their painful experiences or channel their energy more productively, they may become an issue when applied too frequently or for longer periods.

Such mechanisms are a common, natural part of psychological development. Thus, it is essential for individuals to understand which type of defense mechanism they are using or people close to them or even their co-worker as it will help them in future conversations and encounters.

According to a 2016 study 2 , “Defense mechanisms are mental operations that disguise or otherwise modify the content of the mind and/or the perception of reality.” Such psychological techniques aim to protect us from negative and difficult emotions, ideas and motives. The study explains that the working of these mechanisms is generally unconscious or unknown to the individual as it functions effectively only if the individual is ‘unaware of the deception’. However, given the distortions involved, the development of defense mechanisms may conflict with the existence of the individual’s view of internal or external reality.

Research 3 reveals that Sigmund Freud, the father of psychoanalysis, began the discussion of such mental mechanisms in the nineteenth century. This discussion was conducted in regards to the subconscious defenses of the id, ego, and superego. These initial mechanisms were further analyzed and better defined by British psychoanalyst Anna Freud, who was also the daughter of Sigmund Freud, in the twentieth century. She generated 10 major defense mechanisms, which, however, has increased in the later years by other psychoanalysts. Anna Freud describes the phenomenon 4 as “unconscious resources used by the ego” to ultimately decrease internal stress.” A person may tend to utilize these mechanisms to cope with and manage internal conflicts, particularly among “the superego and id 5 .”

If such mechanisms are identified at an early age, it may help predict the development of personality disorders in the future. Therefore, the early observation of defense mechanisms may have an exceptional clinical significance. Depending on the circumstances and the severity, these mechanisms can be either maladaptive or adaptive.

Researchers categorize defense mechanisms into fundamental and higher-level types, as mentioned below.

Some of the most common fundamental mechanisms may include the following:

It is the development of harmful behaviors that divert attention and energy away from other stressors. This defense mechanism may be commenced by conduct disorder, antisocial personality disorder, or oppositional defiant disorder.

It is the act where an individual dismisses the thoughts or feelings that are uncomfortable or maintains a distance from people, places, or situations that make them uncomfortable. It may be associated with post-traumatic stress disorder (PTSD), where an individual may avoid the location of a frightful vehicle accident or may withdraw from driving completely.

This form of defense mechanisms indicates the growth of physical symptoms that cannot be defined by pathophysiology or physical injury. In this case, the mechanism is associated with conversion disorder, also known as functional neurological symptom disorder.

It is a situation whereby an individual refuses to accept the external reality, thus focusing on internal explanations or flaws to avoid the uncomfortable reality of the situation. This defense mechanism may exist in a person who continues to shop expensive products, even though he/she is in serious financial debt.

It is the condition where a person develops a behavioral pattern by observing others. For example, a child unknowingly develops the behavior of his/her parents. Identification is also known as introjection.

Attributing one’s own maladaptive inner impulses to someone else. For example, someone who commits an episode of infidelity in their marriage may then accuse their partner of infidelity or may become more suspicious of their partner.

It is a situation where an individual adapts to earlier levels of psychosocial development. For example, a frightful event may compel an individual to regress to bed-wetting, even after he/she has outgrown the behavior a long time back.

Repression is a type of defense mechanism whereby undesirable ideas or impulses are blocked subconsciously. ‘”This defense mechanism may be present in someone who has no recollection of a traumatic event, even though they were conscious and aware during the event,” explain researchers.

This type of mechanism refers to the act of building internal security into one’s imagination to avoid troublesome conditions. It is commonly present in children or may be present in individuals with a schizoid personality disorder.

It is a type of defense mechanism where a person fails to adjust both positive and negative qualities into a whole understanding, in regards to a person or situation, resulting in all-or-none thinking. Splitting is usually linked with a borderline personality disorder.

Defined as ‘the devotion’ of a person’s effort to solve problems before they occur. This defense mechanism is generally found in individuals preparing for an examination or a job interview, thus practicing to answer the toughest questions.

In this type of mechanism, individuals concentrate on one area of life by removing the focus from other areas, to distract away from the inadequacy or fear of inadequacy. It is generally present in students who receive poor marks in their subjects as they devote more time and effort to extracurricular clubs and activities.

This type of defense mechanism is characterized by the feature whereby an individual’s ’emotional burden or emotional reaction’ is transferred from one entity to another. For example, a person who had a stressful day at work tends to lash out against his/her family at home.

It is used to reduce or fight any negative emotion associated with a situation with the help of humor.

It is the growth of excessive thinking patterns or over-analyzing which results in an increase of distance from one’s emotions.

It is the act of bypassing the experience of a negative emotion associated with an idea, circumstance, or a person. It is generally observed in a person who describes an event of their life in a factual way, devoid of any emotion.

The response of one’s behavior through attempts at a rational explanation. This defense mechanism may be present in someone who steals money but feels justified in doing so because they needed the money more than the person from whom they stole.

It is the act of substituting one’s initial impulse in regards to a situation or idea with the counter impulse. This defense mechanism is found in an individual who teases or insults a romantic interest whom he/she likes. Conversely, it is also present in someone who is extremely kind to someone whom they dislike.

It is the act of linking sexual aspects to one’s experience in regards to people, places, objects, or ideas. Sexualization can also refer to the evolution of one’s sexual identity in general. Additionally, sexualization can refer to the development of special obsessions or sexual references to conventionally non-sexual entities.

“Transforming one’s anxiety or emotions into pursuits that are considered by societal or cultural norms to be more useful” says the study. This defense mechanism is generally observed in someone who directs their aggression and energy into playing sports.

It is an act where an individual consciously blocks ideas or impulses that are undesirable. It is the opposite of repression where the same is done but subconsciously. This form of defense mechanisms may be present in someone who has impertinent thoughts about a shocking event but compels such thoughts out of his/her mind.

While these mechanisms are observed as a type of self-deception used by one to hide emotional responses, it’s usually done unconsciously. In other words, one lacks the ability to understand how his/her mind ego will respond. With that being said, one can still modify his/her changed behaviors. In fact, one can modify unhealthy defense mechanisms into ones that are more sustainable. The techniques to control unhealthy mechanisms are listed below.

With the help of friends and family, one can identify the unhealthy mechanisms. By bringing attention to the mistaken beliefs, the close ones can help the patient to recognize the moment when he/she unconsciously makes an unhealthy choice. It is then that the patient can decide in his/her conscious state what he/she really wants to do.

Attending therapy sessions with mental health experts, such as a psychotherapist, psychologist, or psychoanalyst, may help one to identify the defense mechanisms he/she often utilizes. Such experts can help the person learn about active responses, to make choices on a more mindful level.

A study 6 states that ‘recognition and interpersonal communication’ in regards to any such mechanisms used by the patient is used amongst the psychiatrist, psychologist, social worker, and family. This can further help to determine the patient’s way of using these mechanisms, thus enhancing patient-centered care.

Psychodynamic therapy can include the patient in their own care, by gaining a better knowledge of their own patterns of psychological defense mechanisms. ”Some meta-analysis studies have shown psychodynamic therapy to have equal efficacy compared to cognitive behavioral therapy and pharmacotherapy in the treatment of mild to moderate mood disorders” says the study. It is important to understand that therapeutic treatments based on self-awareness and communication will dodge the potential difficulties of pharmacotherapy, such as side effects and drug-to-drug interactions. Additionally, some patients are more likely to try these therapies compared to pharmacotherapy.

Defense Mechanisms Can Be Helpful In Moderation

Defense mechanisms are healthy and natural and most of the time, they are used without any long-term complications or issues. However, some people may face emotional challenges if they proceed to use these mechanisms without managing the underlying threat or anxiety. However, proper treatment can help one to take care of these issues from a mindful rather than an unconscious one.

It must be noted some of these mechanisms are viewed as more “mature.” In other words, they are sustainable, and in the long term, such mechanisms may not harm one’s emotional or mental health. Two such “mature” mechanisms are sublimation and intellectualization. However, not every defense mechanism is harmless and may give rise to lingering problems if used persistently. In fact, they may prevent one from dealing with emotional issues or anxieties, thereby contributing to some mental health issues.

Thus, if a person feels depressed or sad, unable to get out of bed, or avoiding the usual daily activities, he/she must consult a mental health professional. These are also signs of depression, and therapy can help.

Defense Mechanisms At A Glance