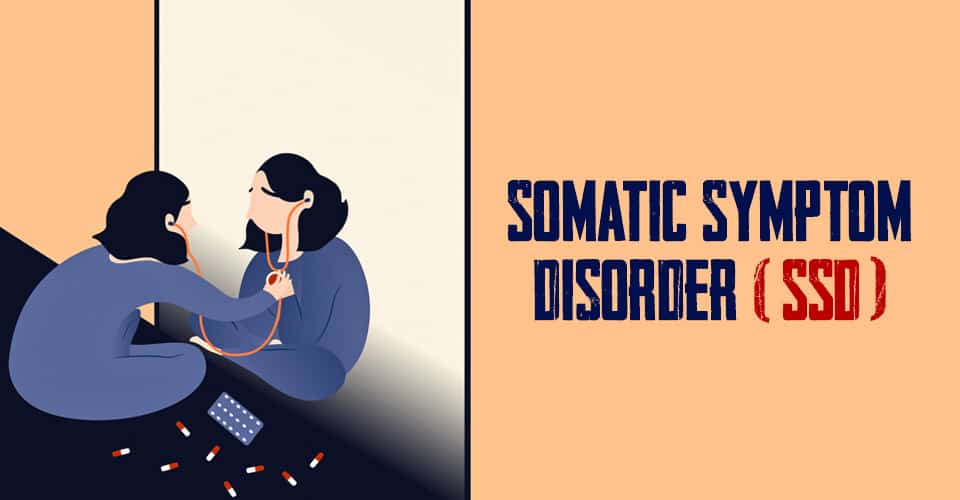 Somatic symptom disorder (SSD) is a psychiatric disorder and is characterized by a strong focus on physical health symptoms. It can lead to severe emotional distress and affect the daily functioning of a person.

What Is Somatic Symptom Disorder?

Somatic symptom disorder can refer to any mental disorder which are manifested through physical symptoms. Although these symptoms may indicate an injury or illness, these are usually not caused by any diagnosed medical condition, or any effect of medication or substance or by any other mental disorder. However, the person affected by the disorder strongly believes that they are ill and need treatment. “Somatic symptom disorder” is defined by the American Psychiatric Association as “a person’s substantial attention on bodily symptoms, such as pain, weakness, or shortness of breath, that results in major distress and/or problems functioning.”

The sufferer is often preoccupied with the physical symptoms and their thoughts, emotions and behaviors revolve around it. Generally, the symptoms are not faked or deliberately produced. Sufferers are not diagnosed with the condition simply because there is a lack of a medical cause for their physical symptoms. Diagnosis primarily focuses on whether the patient’s feelings, thoughts and behaviors concerning the illness are disproportionate or not. Diagnosis may also involve the patient’s medical and family history. Treatment, based on a supportive doctor-patient relationship, can prove effective.

Somatic symptom disorder is also known as somatoform disorder or somatization disorder. According to The Merck Manuals 1 , “Somatic symptom disorder is characterized by multiple persistent physical complaints that are associated with excessive and maladaptive thoughts, feelings, and behaviors related to those symptoms.” The reaction of the sufferer to the symptoms is mostly excessive and abnormal. They may even believe that their medical issues are life-threatening, leading to intense anxiety despite reassurance from their doctor and normal lab test results.

The symptoms can affect one or more organs or body systems and lead to pain, gastrointestinal complaints, neurologic problems and sexual symptoms. Additionally, people suffering from this condition also suffer from an anxiety disorder. Harvard Medical School 2 explains that the sufferer “may be reacting to normal bodily sensations or a minor illness.” They may be prone to worry and anxiety regarding illness in general and tend to feel more threatened by health problems than normal people. “But the person is not faking. The symptoms cause authentic distress,” adds Harvard. The sufferer may exhibit the following behavior:

However, a person affected by somatoform disorder may actually suffer from serious medical conditions. Hence, the symptoms should be evaluated carefully by the physician. Before starting with the treatment, doctors perform many tests to eliminate any other possible causes before diagnosing the somatoform disorder. A 2017 research paper 3 states that according to the Diagnostic and Statistical Manual of Mental Disorders (DSM5), Somatic Symptom and Related Disorders (SSRD) are defined as “long standing somatic symptoms connected with out-of-control thoughts, feelings, and behaviours, regardless of whether or not a medical explanation for these symptoms can be identified.”

Somatic Symptom Disorder At A Glance

A 2017 study 4 states that somatoform disorders have been seldom discussed in epidemiological and health care services examinations of the elderly. According to the data 5 , a total of 3142 community‐dwelling respondents within the age bracket of 65–84 years from six different countries were evaluated by the Composite International Diagnostic Interview. According to the findings, the 12-month prevalence rate for any somatoform disorders was 3.8 percent, with a 0% prevalence rate for somatization disorder according to DSMIV. The prevalence for abridged somatization was found to be 1.7% and the percentage for 12‐months somatoform pain disorder was 2.6%.

Somatic symptom disorder is widespread and is defined as a highly weakening condition in older adults. The condition is often linked with other mental diseases and deserves more research and clinical attention.

The different types of somatoform disorders lie at the extreme end of the scale of somatisation. This leads to prolonged persistence long-term of physical symptoms which are severe, however, no physical disease can fully explain the symptoms. Somatoform disorders include:

Patients with somatization disorder suffer from unexplainable physical symptoms which strikes before 30 years of age while lasting several years. The condition is defined by at least two gastrointestinal complaints, one pseudoneurologic problem, four pain symptoms, and one sexual symptom. Somatization disorder patients must engage in frequent clinical visits, go through multiple imaging and laboratory tests along with numerous referrals made to work up their various symptoms. As per the AFP Journal, somatization disorder is more common in women than in men with a lifetime prevalence of 0.2 to 2 per cent in women and 0.2 per cent in men.

The analysis of the undifferentiated somatoform disorder is defined by a less-specific version of somatization disorder. This form of disorder calls for a six month or longer report of the patient’s history with one or more unexplained physical complaints along with other requisite clinical criteria. Chronic fatigue is a typical symptom with no complete explanation. The highest number of complaints come from young women with low socioeconomic status, however, symptoms are not limited to any group.

Conversion disorder includes a particular symptom related to sensory functioning, thereby suggesting a neurologic condition which is regarded as pseudoneurologic. Conversion symptoms do not correspond to recognized anatomic pathways or physiologic mechanisms, however, they commonly apply to a lay view of physiology which is a clue to somatic symptom disorder. Patients may portray a dramatic fashion or show no concern for their symptoms. The symptoms generally start showing before the age of 10 or after 35. This type of disorder is more common in rural populations, people with lower socioeconomic status, and those with minimum medical or psychological knowledge.

Pain disorder is reasonably common and is associated with psychological factors at its onset. Pain is the main factor of the disorder, however, psychological factors also play the primary role in understanding the pain. Patients with this disorder make use of the healthcare system frequently, take frequent medication, and have problems in marriage, work, or family. It may also drive inactivity and social isolation, and it is usually linked with comorbid distress, anxiety, or a substance-related disorder.

Hypochondriac patients misinterpret physical symptoms and develop a fear of developing life-threatening medical illnesses. As a criterion for the diagnosis, such patients must have a nondelusional distraction with their symptom or symptoms for at least six months. Prevalence of this disorder ranges between is 2 to 7 per cent in the primary care outpatient setting, and there are no consistent differences with respect to age, sex, or cultural factors. The principal trait is the fear exhibited by the patients when discussing their symptoms which is pathognomonic for hypochondriasis.

Body dysmorphic disorder is defined by a debilitating distraction backed by a physical defect, real or imagined. If there is a real physical condition, the defect is usually trivial but the patient’s concern is superfluous. The disorder is equally distributed among men and women.

Somatoform disorder not otherwise specified is a psychiatric analysis where the full criteria for the other somatoform disorders do not meet, however, possess physical symptoms that are misunderstood or fabricated with resultant impairment. A diversity of ailments come under this diagnosis, including pseudocyesis or the mistaken belief of being pregnant based on actual signs of pregnancy such as the expansion of abdomen, feeling nausea, breast changes, labor pains, etc.

No one exactly knows the symptoms of the disorder and the related disorders. There might be issues with the nerve impulses sending signals of pain, pressure, and other unpleasant sensations to the brain, without knowing whether the sensation is real or imagined. However, some of the common symptoms of somatoform disorder are:

Additionally, pain is the most prevalent symptom. However, irrespective of the symptoms, the excessive thoughts, feelings or behaviors related to those symptoms causes notable problems, thereby making it difficult to work and sometimes can be disabling.

Such thoughts, emotions and behaviors can include:

Somatoform disorders can affect anyone across any age group. However, the exact number is quite difficult to determine as in many cases the condition is probably left undiagnosed. Furthermore, it is not exactly known as to why people develop somatoform disorders. However, the disease is more common in an individual who abuses alcohol and drugs. But drugs and alcohol may be determinants in both cause and effect. With that being said, causes of somatoform disorders are many and different. The most common causes are:

The diagnosis of somatic symptom disorder can generate a lot of stress and frustration for patients. They may feel unhappy if there’s no better physical evidence catering to the symptoms or if the patient is told that his/her level of worry about the physical illness is excessive. However, somatic symptoms and related disorders can be difficult to diagnose. The doctor will do a physical exam and possibly other tests. If the tests show that the patient is not sick, the doctor may refer them to a mental health provider.

Patients who suffer from unexplained physical symptoms often strongly feel that their symptoms have a physical cause while the reality is the opposite. These beliefs are based on a wrong understanding of symptoms. However, there are ways to treat somatoform disorders that are mentioned below.

Explaining the diagnosis requires planning and practice. The physician must first develop a therapeutic connection with the patient. This can be partly accomplished by recognising the patient’s discomfort catering to his or her unexplained physical symptoms. The doctor must also maintain a high degree of compassion toward the patient during all encounters.

Cognitive behavioral therapy (CBT) 8 can significantly help with the treatment of somatic symptom disorder. It concentrates on cognitive distortions, nonsensical beliefs, worry, and behaviors that proclaim health anxiety and somatic symptoms. Benefits of cognitive behavior therapy include controlled frequency and severity of symptoms along with the cost of care, and improved patient functioning.

The patient must regularly visit the doctor for brief follow-ups as it is an important aspect of the treatment. This preserves the therapeutic alliance with the doctor, and provides an environment of openness and willingness to help. It enables the patient to share his/her worries catering to the illness and the opportunity to be encouraged repeatedly that the symptoms are not signs of a physical disorder. Scheduled visits may also limit repeated and redundant between-visit while reducing excessive health care use.

How To Help Someone With Somatic Symptom Disorder

When physical symptoms considered for somatoform disorders are ruled out, it can be challenging to accept that a life-threatening illness has been dismissed as the cause. Such symptoms cause real distress for the patient and reassurance isn’t always effective. Thus, encourage your loved one to accept the possibility of a mental health and to learn the methods of coping with the symptoms. Physical disability may make the person feel helpless along with the need for extra physical care and emotional support. This can exhaust the caregiver and cause stress on the family and other relationships.

There is very little information about self-care catering somatic symptom disorder. However, these recommendations may help.

Somatoform disorders are associated with a set of risks and complications. These are as follows.

Treatment of people with somatic symptom disorder is challenging, time-consuming, and necessitates patience and compassion. Organic medical conditions must be eliminated followed by psychiatric conditions before any positive examination of a somatoform disorder is confirmed. A strategy for further care should be well-planned to encourage the patient to acknowledge the disorder with the ability to help him/her share the concerns catering to the same freely. Furthermore, steady support from the family and the loved ones can help a patient fight this condition to a large extent.