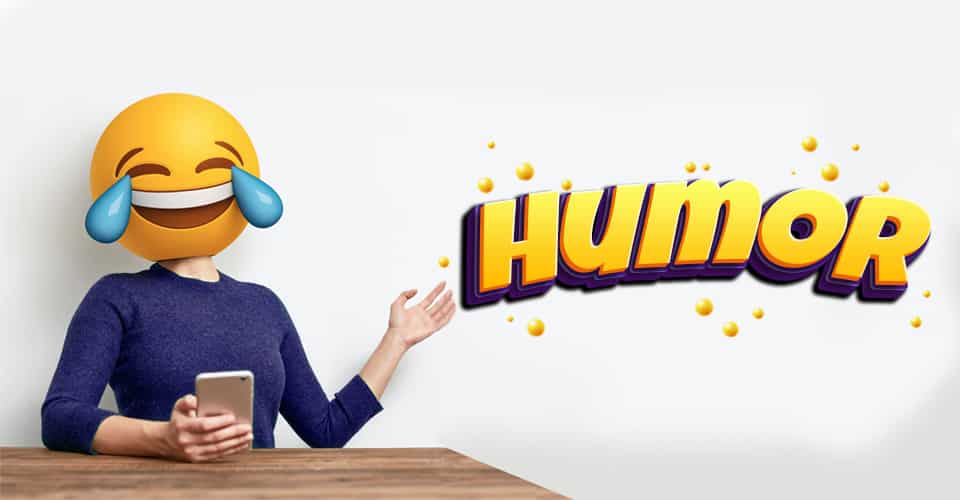 Humor is a broad term that describes any comic, absurd, or incongruous capacity to express or perceive what is ludicrous or amusing. It plays the role of both a source of entertainment and a means of dealing with difficult situations.

Humor or hilarity refers to the quality or capacity of action, speech, or writing which entertains and excites amusement. This capacity mostly provokes laughter but can play significant roles in different social situations. Many people assume that humor must include laughter but such a perception is not necessarily true. Any action or behavior that relaxes the body, helps to breathe, causes a smile, and triggers happiness can be addressed as humor. Hilarity can also be defined as communication in which the stimulus produces amusement. A 2019 research 1 suggests that the universal phenomenon includes two primary elements:

“Humor refers to the tendency to experience or express what is amusing and funny, however, people from different cultural backgrounds may see the humor in different ways”, the study added. Human emotions like joy, laughter, anxiety, fear, anger, depression affect the physiological and psychological processes of people. Studies 2 have shown that the humorous capacity helps people to deal with different situations and events, such as:

Though hilarity often involves the violation of expectations, certain factors such as culture, age, political orientation may have an impact on what people find humorous or funny. A 2017 research paper 3 says that humor can improve one’s performance in various domains by sustaining attention, reducing stress and anxiety, enhancing participation, and increasing motivation.

Renowned philosophers like Plato and Aristotle have been trying to examine the humorous capacity of people since ancient times. Several recent studies have described various significant theories of the underlying mechanisms of hilarity. A 2009 research paper 4 explains three top theories of humor, such as:

These theories claim that hilarity consists of numerous psychological benefits of laughter. According to a 2010 study 5 , humor plays an important role as a character strength which is extremely crucial to human thriving. This study shows that hilarity is positively correlated with life satisfaction as well as pleasurable and engaged life.

Humor comes in a variety of forms, including some lighthearted forms and some absurd ones. Every culture, family, classroom, city, or even nation has its own distinctive sense of humor. Here are the nine most common types of hilarity:

Slapstick refers to the physical humor that involves some kind of physicality. In this type, people exaggerate their wild body movements to make others laugh. A 2016 research 6 suggests that slapstick comedy gains its effect by its very spontaneity. It may include pranks, gags, or practical jokes always accompanied by some humorous body language. Clowns, mimes, and funny facial expressions are some of the examples.

It can also be termed as absurd hilarity. This type includes numerous weird, strange, or illogical happenings and situations that ultimately end up being funny. Research 7 says that absurd comedy contains an unresolvable incongruity but can still induce a feeling of amusement.

It often consists of certain phonetic combinations such as absurd and meaningless words, clever rhetorical excursions, and oddly formed sentences. Wordplay refers to playing with words including language twisting to create a funny outcome. According to a 2010 study 8 , wordplay humor can improve both recall and recognition memory following incidental encoding.

This type is the most common one among stand-up comedians in which they make fun of themselves and are rewarded with laughter and smiles. This type of hilarity makes everyone laugh rather than feel bad for the comedian. Studies 9 have found that self-deprecating comedy is more likely to establish an equal relationship between the speaker and the audience. It makes the audience comfortable as the comedian seems real and humble to them.

This type of hilarity is the most intelligent one and extremely difficult to detect. It is the complete opposite of slapstick hilarity that requires a person’s mind to be active and engaged. It may not be extremely funny or full of laughter but it portrays the intelligence of a person extremely well. A 2017 research paper 10 claims that witty comedy can apparently be used in negative as well as positive ways. It is often termed as deadpan or dry humor as the person who uses this type never shows any emotion.

Improv refers to a live platform where every performance is made up on the spot. With this type of hilarity, an individual makes up jokes on the spot itself that makes the comedy style funnier. It is the most difficult to perform, but most of the time the awkwardness makes the comedy more entertaining. According to a 2018 study 11 , improv humor helps older adults combat several geriatric syndromes such as depression, stress, and isolation.

A person pokes fun at everything he/she notices in everyday life by using observational hilarity. Most stand-up comedians use this type of humor while performing. Research 12 says the observational sense of humor improves one’s observational skills.

This type is also known as toilet jokes. It involves numerous jokes and funny memes about certain human body functions. It is considered to be a divisive kind of hilarity and quite popular among men and teenagers.

This type of hilarity often consists of some dark, unpleasant, or depressing underlying themes and concepts but displays some comical and unusual situations. Such humor tends to offend most people. Studies 13 have shown that dark comedy often involves inflicting damage to the self and have also been found to be linked with darker aspects of personality. Dark humor, often known as twisted humor, includes an acquired taste that many people may not appreciate as they can consider it as a disturbing subject matter.

Humor and laughter act as the best medicine in relieving stress, elevating mood, and making a person more resilient. Recent studies 14 have found that hilarity and laughter can be effective tools to maintain healthy relationships. It does not just help in attracting others but also in overcoming the discomfort or awkwardness that often develops during the process of getting to know each other. The humorous capacity of a partner keeps an established relationship exciting, vibrant, and fresh. Here are some of the important benefits of using hilarity in your relationship:

Though it requires more research, a 2016 research paper 15 explains that hilarity or laughter as physical activity can additionally produce small but quantifiable positive physiological benefits. According to a 2018 study 16 , humor also enhances our coping abilities to deal with certain mental health issues. It reduces anger, anxiety, depression, and overthinking issues that we deal with during various difficult and challenging situations. The following are some of the physiological and psychological benefits of hilarity:

Humor creates laughter, which as physical activity, relaxes a person’s muscles. A recent 2020 study 17 suggests that it is extremely beneficial for vascular functioning. It helps you to take in more oxygen and stimulates your lungs. Cardiac health is closely associated with laughter as it increases one’s heart rate and lowers blood pressure.

A 2011 research 18 explains that hilarity is associated with improved sleep quality in older adults. Another research 19 says that extensive laughter boosts one’s immunity and makes one more resistant to disease.

Humor can distract you from any physical pain or discomfort you’re experiencing. Laughter releases endorphins 20 that work as a natural painkiller. Endorphin is known as the feel-good chemical of our body.

As hilarity induces laughter, it is strongly interlinked with burning calories. A 2007 study 21 claims that laughing for 10-15 minutes a day can burn around 40 calories.

Humor is proved to be extremely beneficial in reducing anxiety, depression, and stress. Some studies 22 have found a variety of positive effects of laughter therapy on anxiety or stress-related psychological health issues. This study shows that laughter stimulates multiple physiological systems that decrease levels of stress hormones, such as cortisol and epinephrine. A 2011 research 23 claims that humor reduces verbal hostility and aggression.

Another important benefit of using humorous capacity is that it improves our memory retention. A 2014 research paper 24 suggests that humor can improve learning and delayed recall abilities in elderly people.

Hilarity can instantly lighten our mood. It decreases levels of stress hormones and increases the activation of the mesolimbic dopaminergic reward system. Studies 25 have shown that people’s mood is regulated due to the pleasure-reward pathway being activated by the brain.

How To Use Humor To Manage Conflicts

Use Humor To Build Stronger Relationships

Humor is a great capacity or ability of people that evokes amusement and happiness. It also provides numerous psychological and physical benefits. Except for these benefits, it brings people together and creates a platform for healthy communication. It adds positivity to the new and established relationships. One should learn to use humor effectively during difficult times as it can ease out the situational tension instantly.

Humor At A Glance