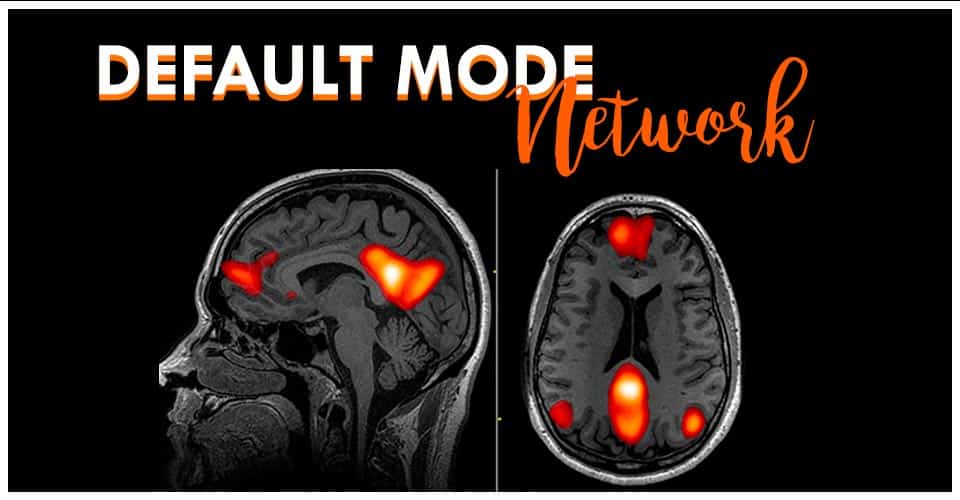 The default mode network or DMN refers to the neurological pattern that occurs when the brain is at rest. Brain imaging techniques have allowed researchers to begin to recognize how our brain works in a physiological sense in regards to activity, inactivity, connections, and relationships between different parts of the brain.

What Is The Default Mode Network?

The default mode network (DMN) refers to a system of connected brain areas’ that exhibit an increased activity when a person is sitting idle or not focused on the outside world. Also known as default state network or default network, it is a collection of brain areas that seem to display lower levels of actions when one is engaged in a particular task. On the contrary, the same collection of brain sections display higher levels of activity when one is awake and not involved in any specific mental exercise. This brain network involves the angular gyrus, the posterior cingulate cortex/precuneus and the medial prefrontal cortex. These regions together display joint activation (or deactivation) in conjunction with distinct mental functions.
DMN is typically active during periods when we are in a state of wakeful rest 1 (i.e. a period of no or minimal stimulation) and not specifically focused on a task or distraction. It means, he/she is not engaged in any externally situated mental task, thus giving rise to the term “default.”

This network can also be activated when we are engaged in detailed and deep thoughts about active task states 2 or about others or ourselves, daydreaming, planning or remembering about past events. One 2017 study 3 explains that “DMN is responsible for a self-referential introspective state.” According to another 2016 study, the DMN is a ‘set of brain regions’ that presents strong low-frequency vibrations. These are identified during resting state and are considered to be activated when individuals are focused on their internal mental-state processes. DMN is deactivated during cognitive task performance. The posterior cingulate cortex, precuneus, medial prefrontal, and inferior parietal cortices are thought to be parts of DMN.

According to a 2016 study, the default network was defined after researchers observed that selected brain regions experienced increased metabolic activity during rest and vice-versa when engaged. Post this observation, other subsequent investigations were conducted to support the idea that the DMN is normally occupied during internally focused tasks yet is reduced during cognitive requirements. The network provides a mental exploration of our emotional & social content. “DMN activity increases during perspective-taking of the desires, beliefs, and intentions of others in remembering the past and in planning the future,” adds the study.

Such functions essentially include the self as a reference point. The self-referential features of these activities imply that the DMN may play a role in adaptive behavior. This is done by enabling the scenarios to be formed, replayed, and explored in the mind, both from the past and future events. Decreasing the activity in the DMN during effortful cognitive function may indicate the need to reduce the brain’s self-referential actions in order to focus on the task at hand. Overactivity of the DMN may also explain the general symptoms of major depression. Major depression is identified by “prolonged rumination or the recurrent, reflective, and uncontrollable focus” on the depressed mood and its causes and consequences. Major depression in middle-aged adults has been frequently connected to enhanced activity within the DMN, which in turn is related to negative rumination.

As per a 2011 study 4 , the brain’s “default mode network” is one of the fastest-growing neuroscientific topics in the new millennium. Since the selection of its name a decade ago, the default network has earned considerable interest for its high level of resting metabolic activity, which decreases in the face of externally-directed attention. However, the concept of a default mode network has earned a considerable amount of controversy as well. There are some who claim that it is a challenge to define resting alertness as comprising a unique state of activity 5 , as energy loss during this state is equal to energy loss during other waking states. Others have stated that it is difficult to explain these patterns of activity during such resting states along with the functional significance of the connections between the brain regions in the default mode network.

Parts Of Brain Involved In The Default Mode Network

Regions of the brain 6 that are included in the DMN are:

All of these regions are related to some aspect of internal thought. For example, the medial temporal lobe is linked with memory. The medial prefrontal cortex is associated with the theory of mind, the capacity to understand others having thoughts and feelings similar to one’s own. The posterior cingulate is believed to involve combining different kinds of internal thoughts.

Functions Of The Default Mode Network

SAccording to research 8 , DMN is a novel brain system that is actively involved in “internal modes of cognition.” Since, the default mode network is most active when at wakeful rest and because of the structures involved, it is believed that DMN is associated with introspective thought, such as daydreaming or retrieving memories. The network involves certain regions which are “spontaneously active during passive moments. The network is also active during directed tasks that require participants to remember past events or imagine upcoming events,” explains a 2013 study 9 . Variations in the default network are associated with an array of different diseases, including Alzheimer’s disease 10 , autism, schizophrenia, bipolar disorder, post-traumatic stress disorder, depression, and more. Diseases may result-in either too little or excessive activity and sometimes the data vary depending on which is actually occurring.

Several studies have evaluated the effects of normal aging on DMN activity, and they have consistently recorded a significant effect of age. According to a study, the default mode network has exhibited a significant reduction in activity with age when measured at rest. It has also displayed weaker deactivation, within superior and middle frontal, precuneus/PCC, middle temporal, superior parietal, and medial areas such as medial prefrontal, anterior cingulate, and hippocampal regions. “These disturbances may reflect a reduction in the ability to suspend DMN activity when high order cognitive processes are required,” states the study. Based on this, the Posterior Anterior Shift in Aging (PASA 11 ) model was proposed.

It was designed to estimate the fact that when deactivations in occipitotemporal areas of the DMN are diminished, bilateral frontal region deactivations progress in healthy elderly compared to a young person. However, this rule does not apply to all findings, particularly those reporting weak deactivations or activations in older subjects’ anterior DMN areas. In these studies, older individuals have failed to produce reinforced frontal deactivations to compensate for the posterior DMN disturbances, thus not matching the PASA model. However, further studies are required to better explain healthy aging effects on DMN activity and to explore potential functional compensation processes in frontal areas.

Researchers are exploring default mode network disturbances in different pathological states 12 including schizophrenia, autism, hyperactivity disorder, epilepsy, multiple sclerosis, and Alzheimer’s disease 13 (AD). Research on AD is the most common as the DMN includes two key areas in AD, that is, the posterior cingulate cortex and hippocampal formation.

According to a 2015 study, in healthy individuals, DMN activity has been anti-correlated with goal-oriented, task-positive networks. On the other hand, abnormal DMN activity is linked to a number of psychological disorders such as schizophrenia, epilepsy, anxiety, depression, autism, attention deficit hyperactivity disorder, and Alzheimer’s disease. These relationships have generalized the use of DMN analysis as a method by which mental disorders can be studied. This has resulted in a growing body of research concerning disorder-specific variations within the default mode network.

Some examples of network variation include failure to deactivate the default network during tasks in both autism and depression, decreased DMN activity and connectivity in AD. Additionally, antagonistic activity during attention-demanding tasks in schizophrenia, differences in functional connectivity in both anorexia and autism, and network inhomogeneity in ADHD and bipolar disorders. In some disorders such as Alzheimer’s Disease, depression, and schizophrenia, these peculiarities of the default mode network are compatible enough to be evaluated for use as diagnostic biomarkers.

During the many quiet moments that comprise daily life, the human brain heightens its activity across the default mode network. Despite the strength with which the brain defaults to this pattern of activity, very little is known about the network’s specific anatomical structure and adaptive functions. At rest, brain activity is one of the most significant research fields of the past decade in neuroimaging. Major improvements have been made in the characterization of the physiological and anatomical properties of resting-state networks, particularly those of the default mode network. According to a study, healthy aging and AD were determined to have meaningful and distinct effects on deactivations and DMN activity or connectivity.

However, to satisfy a fully consistent functional account of the default network, a study states that it is important to identify how the ‘subsystems interact with each other’ when individuals engage in real-world decisions that involve combining information from distinct subsystems.

Default Mode Network At A Glance