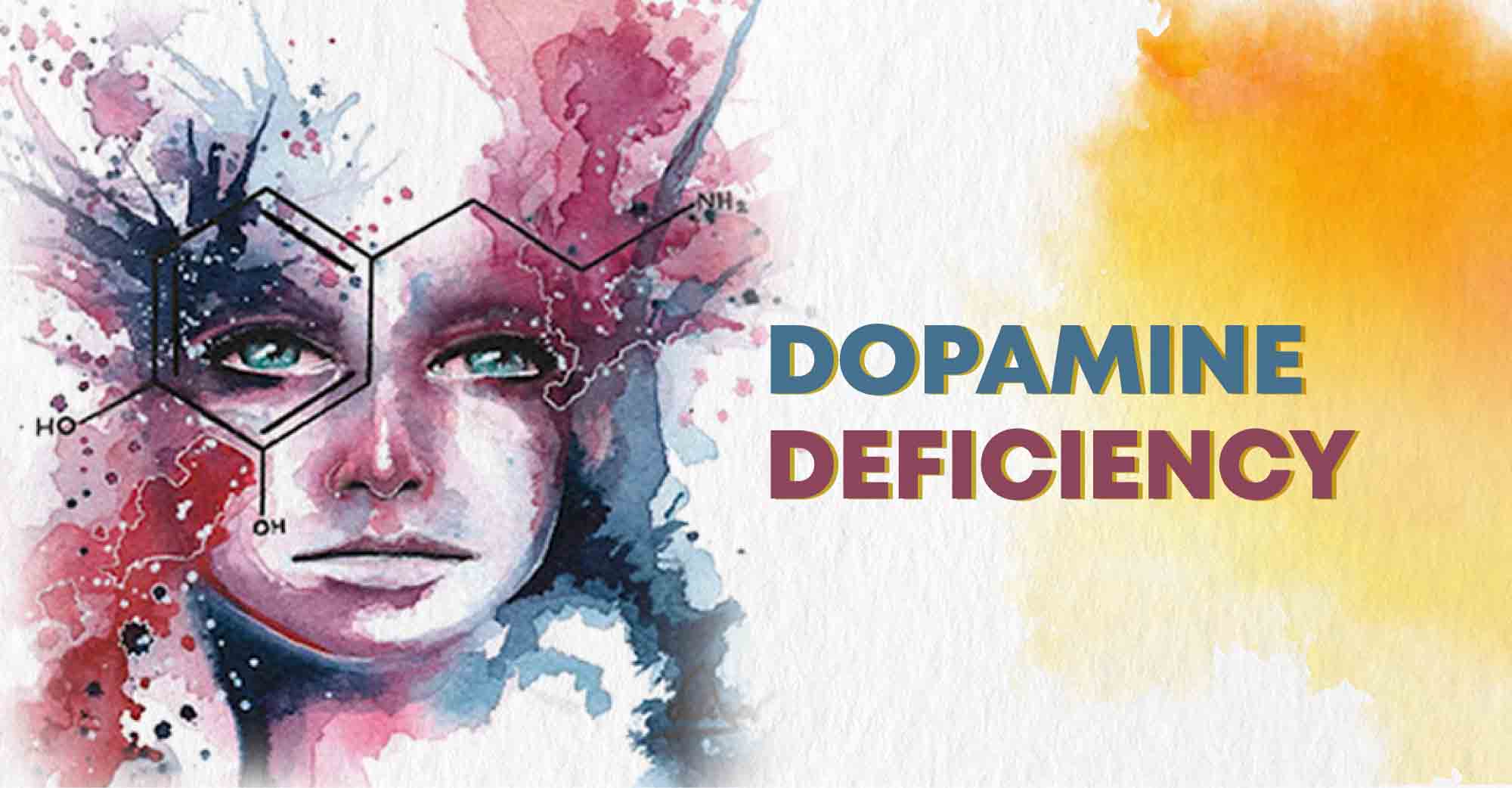 Dopamine deficiency refers to low levels of dopamine in the brain which can adversely affect our emotional responses and movements. This can cause dopamine deficiency syndrome, which is a hereditary movement disorder. It is an extremely rare condition.

What Is Dopamine Deficiency?

Dopamine is a neurotransmitter that regulates our motivation, pleasure and reward system. It is also associated with memory, learning and motor system function. According to a 2016 study 1, “Dopamine (DA) plays a vital role in reward and movement regulation in the brain.” Researchers from another study 2 explain “DA plays multiple functions in the brain.” However, unbalanced or low levels of dopamine can result in various severe mental and physical health conditions. Although we may not be able to accurately measure the dopamine levels in our brain, low levels of DA and irregular DA activity can lead to certain symptoms and ailments, such as Parkinson’s disease, attention deficit hyperactivity (ADHD), schizophrenia, depression and addiction.

“DTDS is a recently described neurotransmitter disease that is classically characterized by an infantile onset, complex progressive motor disorder that is pharmacoresistant and life-limiting,” explains a 2014 study 4 on DTDS. The condition is known to be progressively worsening, early infantile-onset parkinsonism and dystonia. It is regarded as extremely rare as there have been only 20 confirmed patients of DTDS mentioned in medical literature, according to the U.S. National Library of Medicine. It is believed that this syndrome may be underdiagnosed or misdiagnosed as the symptoms tend to be common with movement disorders, like cerebral palsy. Hence, it is believed that the condition may not be as rare as believed earlier.

DTDS severely affects an individual’s ability to control or move their muscles and body. Generally, symptoms tend to appear in infancy but in some cases they may appear later in life. As of now, there is no specific cure for DTDS. However, treatment focused on managing the symptoms can prove to be helpful.

Dopamine deficiency syndrome usually develops during infancy and worsens progressively over time. However, sometimes the symptoms may become noticeable only in childhood or later. Dopamine transporter deficiency syndrome can cause dystonia, which involves a pattern of sustained, involuntary muscle contractions. The contractions tend to affect a range of different muscles and lead to constant muscle spasms and cramps. This can significantly impair a person’s ability to conduct daily activities, such as walking, eating, drinking and even speaking.

The affected person may eventually develop parkinsonism as the condition becomes worse. Parkinsonism is characterized by different movement abnormalities, such as bradykinesia (abnormally slow movement), rigidity, tremors and postural instability or being unable to balance or hold the body upright. DTDS can adversely affect a person’s lifespan. However, researchers are yet to identify the long-term effects of this syndrome on the patients. The development of dopamine deficiency syndrome is regarded as a continuum as it involves early-onset DTDS, where the symptoms arise in the first 6 months; and atypical later-onset DTDS, where onset occurs in childhood, adolescence or even adulthood. If the symptoms arise later in life, then it may continue into adulthood.

Some of the most common signs and symptoms associated with DA deficiency, irrespective of the age of onset, include the following:

Here are some general signs of low DA levels in the brain:

Low levels of DA may also cause the following psychological symptoms as well:

Apart from the common symptoms of dopamine deficiency, here are some specific symptoms 5 of Dopamine transporter deficiency syndrome (DTDS):

Low DA levels can be caused by a variety of factors such as serious health conditions or poor lifestyle. Some of the common causes of dopamine deficiency may include –

However, the dopamine transporter deficiency syndrome (DTDS) is believed to be caused by various factors, some of which are mentioned below:

1. Mutations in the SLC6A3 gene

It is yet to be known how dopamine signaling changes cause certain movement abnormalities seen in individuals with DTDS even though dopamine helps to regulate movement. However, the age of onset is believed to be associated with the intensity of impairment in the function of the dopamine transporter.

Other Conditions Associated With Dopamine Deficiency

Apart from DTDS, low levels of dopamine can also cause a range of other mental and physical health issues. Studies 12 show that dopamine deficiency is associated with a number of different psychiatric and neurological disorders, such as Parkinson’s Disease 13, Alzheimer’s disease 14, schizophrenia and drug addiction, such as cocaine and amphetamine. Low DA function is also related to Huntington’s disease and attention deficit hyperactivity (ADHD) 15. A 2019 study 16 explains that dopamine signaling pathways are potentially involved “in evoking the onset and progression of some diseases in the nervous system, such as Parkinson’s, Schizophrenia, Huntington’s, Attention Deficit and Hyperactivity Disorder, and Addiction.” Studies 17 reveal that dopamine deficiency is also linked with obesity and pathological eating. Researchers 18 believe that “low brain DA activity in obese subjects predisposes them to excessive use of food.”

Low DA levels also increase the risk of a number of mental health disorders schizophrenia, depression and addiction. According to a 2014 study 19 found that dopamine abnormalities have been found to be involved in schizophrenia. Research 20 also shows that DA levels also play a significant role in depression. A 2017 study 21 in major depressive disorder and anhedonia revealed that “Anhedonia is considered a core feature of major depressive disorder, and the dopamine system plays a pivotal role in the hedonic deficits described in this disorder.” Scientists have also found that dopamine deficiency strongly influences addiction as well. “As a result of habitual intake of addictive drugs, dopamine receptors expressed in the brain are decreased,” explains a recent study.

As there is no accurate way to effectively measure DA levels in our brain, diagnosing dopamine deficiency may be challenging. Moreover, the diagnosis of rare, genetic conditions are often difficult. However, a healthcare professional can utilize certain certain techniques to determine imbalance of DA levels in a person’s brain. A doctor may check the patient’s family and medical history, lifestyle factors, analyze their symptoms and conduct certain lab tests and physical exams to make a diagnosis. Although dopamine levels can be measured by a blood test, the brain’s response to DA cannot be evaluated. Apart from testing blood samples for the genetic markers of DTDS, doctors may also test cerebrospinal fluid for assessing acids linked to DA. This is called a neurotransmitter profile. Apart from these, the Genetic Testing Registry (GTR) can also offer necessary information about genetic tests for Dopamine transporter deficiency syndrome.

As DA levels can also be influenced by certain underlying medical conditions, doctors often focus on diagnosing a patient based on their symptoms instead of testing DA levels. If you believe that you have dopamine deficiency, then make sure to consult a doctor immediately as the symptoms are manageable, even though there is no specific cure.

There is no standardized or established treatment plan for DTDS. The doctor needs to work closely with the patient to determine what treatment approach and medications may work through trial and error. According to studies 22, other movement disorders, such as Parkinson’s disease, which are also related to dopamine production, can be effectively treated with levodopa (L-Dopa) 23, the precursor to dopamine, to relieve symptoms. Researchers have used the dopamine antagonists pramipexole 24 and ropinirole 25 to treat dopamine deficiency syndrome as these medications help to relieve symptoms of Parkinson’s disease in adults. Although there has been some success, further research is necessary to understand the long-term and short-term side effects.

Apart from medications, counseling and physical therapy to improve movement difficulties and muscle stiffness can be effective as well. Moreover, certain lifestyle and diet changes can also help to improve dopamine in the body and relieve the symptoms. Some helpful strategies may include:

However, it should be noted that there is no conclusive evidence that altering diet or using home remedies can help to treat dopamine deficiency syndrome.

Dopamine deficiency can cause a wide range of physical and psychiatric health problems, including Dopamine transporter deficiency syndrome (DTDS). As evidence is limited regarding the effectiveness of diet changes and home remedies, one of the best ways to overcome dopamine deficiency is to seek medical attention immediately. If you think you or a loved one is suffering from low DA levels, then make sure to consult a doctor and follow the treatment plan strictly. With the help of medications and physiotherapy, one can relieve DTDS symptoms in the long run.