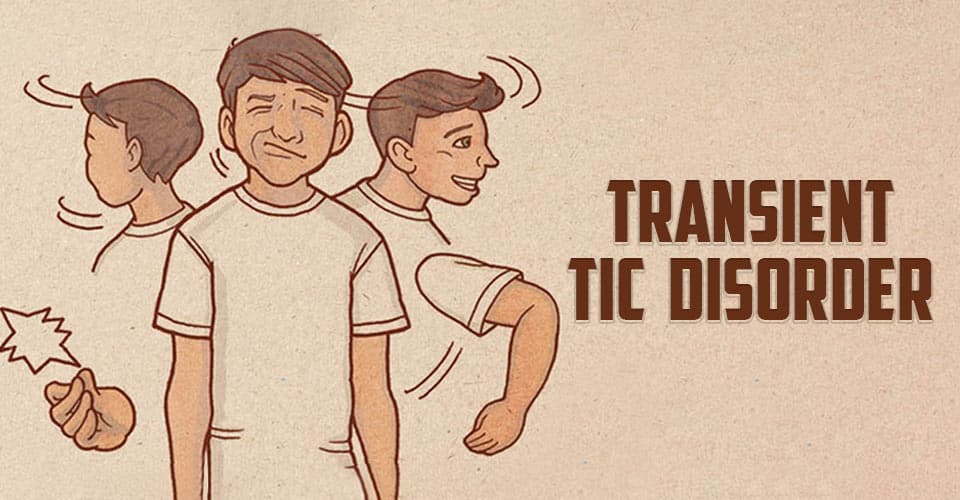 Transient tic disorder or provisional tic disorder is a motor disorder in which a person undergoes involuntary motor and/or verbal tics for under one year. Tics are often portrayed as being led by a strong, uncontrollable urge to tic, followed by a release of tension. In this article, we will learn the various aspects associated with this disorder along with ways to treat the same.

What Is Transient Tic Disorder?

Tics refers to a condition whereby the patient suffers from irregular, uncontrollable, repetitive, and unwanted movements of muscles that can occur in any part of the body. The Mind Help explains, ”transient tic disorder (TTD), also known as provisional tic disorder (PTD), is the most common type of tic disorder, involving physical and verbal tics. It is a condition in which a person makes one or many brief, repeated, movements, or noises (tics)”. It must be noted that these movements or noises are involuntary or not on purpose. Transient tic disorder involves both motor and vocal tics. Movements of the limbs and other body parts are known as motor tics while involuntary repetitive sounds, such as grunting, throat clearing, and sniffing are called vocal tics. While this particular type of tic involves both types of tic, they often occur individually. Also, motor tics are more common in the cases of transient tic disorder than vocal tics. Children with transient tic disorder will exhibit one or more tics for at least 1 month, but less than 12 consecutive months. The condition was renamed by DSM-5 (Diagnostic and Statistical Manual of Mental Disorders) 1 in 2013.

There are various cases of tics that are temporary and resolve within a year. However, individuals who experience tics may also develop a persistent disorder. According to a 2017 study 2, the onset of tic disorders occurs in childhood, around the age of 4 to 5 years but often don’t present until later, i.e., at the age 9 or 10 yrs. The condition is known to be present in as many as 10% of children. The study also mentions that the condition begins as simple motor tics while some progress to complex motor tics and phonic tics for 1-2 years. Nearly ‘1% of children develop intrusive daily motor and phonic tics’ for over one year and therefore fulfill diagnostic criteria for the condition. The most challenging period with maximum tic severity commonly prevails at the age of 8-12 years. By age 18, adults outgrow the impairments due to tics and a very small percentage of young people step into their adulthood with furthermore complex symptoms of this condition. Also, tics are more common in males than in females, as mentioned in the study 3.

According to a 2003 study 4, a survey was carried out in a Swedish school among children aged 7 to 15 years. A total population of 4479 children and their parents were asked to fill in a questionnaire covering both motor and vocal tics. In this survey, screening, interviewing, and clinical investigation was conducted. In that study, 190 males and 107 females were found to have tics. Going by the DSM‐IV criteria, it was found that 0.6% of the total population has tics and another 0.8% had chronic motor tics backed by 0.5% who had chronic vocal tics. Further, 4.8% of the children had transient tics.

There is no known cause of transient tic disorder. Just like Tourette syndrome and other tic disorders, it is assumed that a combination of factors influences this condition in children. While some studies suggest that genetic mutation can cause this condition, others relate this disorder with abnormalities in the brain, such as depression and attention deficit hyperactivity disorder (ADHD). Some research also suggests that transient tic disorder could be linked to neurotransmitters as well, which are chemicals in the brain that transmit nerve signals to our cells.

A study of 2016 6 states that tics are even more common in children with attention deficit hyperactivity disorder (ADHD), obsessive-compulsive disorder (OCD), or intellectual disability. A survey was conducted on a group of boys with ADHD where nearly 17% of buys had tics at baseline vs. 4% in boys without ADHD. Boys with ADHD were more likely than those without ADHD to develop new tic disorders over a 4-year follow-up period within the age group of 6- to 8-years.

The same study also mentions a survey where first-degree relatives of individuals with Tourette’s syndrome (TS) were followed for 2 to 4 years. Nine of 21 children were diagnosed free of tics initially but in the final assessment, the 4-year-old children had developed tics. Out of this, five were diagnosed with TS, two with chronic motor or vocal tic disorder, and two with DSM-III-R transient tic disorder (TTD). In other words, at least one-third of children in this sample had developed a chronic tic disorder over an average of only 3 years. In a similar study, nine of 29 children of a parent with TS had a tic disorder at baseline, and 10 more had developed a new tic disorder over the next 2–5 years. Various case-control and family studies 7 of OCD have also found an excess of tic disorders in OCD relatives, and suggest that tics are more common and more severe in relatives of boys with OCD beginning earlier in childhood. Thus, high rates of tic disorders including PTD in probands and family members of patients with ADHD and OCD suggest that the condition shares a genetic predisposition. The study also suggests that maternal smoking or other drug use during pregnancy may also increase the risk of developing TS and PTD or TTD.

Tic disorders include Tourette syndrome, chronic motor or vocal tic disorder, and transient tic disorder. The doctor may diagnose tic disorder as nonspecific if the symptoms do not fall exactly into one of these categories.

The common motor symptoms for transient tics disorder are:

The vocal symptoms of transient tics disorder include:

It must be noted that tics are often confused with nervous behavior. The symptoms intensify when the patient is under extreme stress while the symptoms are absent when the person is sleeping.

There is no concrete test to diagnose transient tic disorder and any other tic disorders. They are difficult to diagnose as tics are sometimes linked to other conditions. For example, allergies from cold or any other element may cause repeated sniffing or twitching of the nose.

If a person has tics, the doctor will conduct a medical evaluation by performing a physical examination (especially a neurological exam) along with gathering complete medical history. This will help the doctor to rule out any underlying medical condition as the cause of the symptoms.

The doctor may need to conduct other tests or may suggest other tests such as brain CT scans and blood tests to determine if the condition is a symptom of something more serious, such as Huntington’s disease 8 .

However, to get diagnosed with transient tic disorder, an individual must meet the following DSM-5 criteria as mentioned below.

As we have mentioned previously, transient tic disorder in children outgrows with time. It is important to educate the associates (parents and teachers) in the child’s life rather than allowing them to call attention to the condition as it will only make the child feel more conscious and aggravate the symptoms. A combination of therapy and medication may help in situations where the tics may interfere with work or school.

Since stress can make tics worse or more frequent, techniques to control and manage stress are important. Cognitive-behavioral therapy is an effective way to treat tic disorders. During the therapy sessions, a person learns to avoid self-destructive actions by controlling his/her emotions, behaviors, and thoughts. According to a 2009 study, while behavioral therapies have not been particularly beneficial in disabling tics, effective therapy approach consists of operant conditioning models (rewarding tic suppression and discouraging disruptive tics) and massed practice (repeated, voluntarily performance of a tic until fatigue occurs). Habit reversal therapy (HRT) can be practiced if a single tic is extremely disruptive or causing self-injury or pain. HRT guides patients to recognize their tics, and to make a free movement different from the tic each time a problem tic occurs. Open-label assessments have identified sustained benefit from HRT for up to 10 months.

While medication cannot entirely cure tic disorders, it can reduce symptoms for some people. The doctor may prescribe a drug that may reduce the dopamine in the brain, such as haloperidol (Haldol) or pimozide (Orap). Dopamine is a neurotransmitter that may influence tics.

The doctor may also prescribe antidepressants to treat symptoms of anxiety, sadness, or obsessive-compulsive disorder, and may help with the complications of transient tic disorder. According to a 2009 study 9, dopamine receptor blocker medications such as classic neuroleptic antipsychotics, including haloperidol, pimozide, and fluphenazine, have documented efficacy in controlled clinical trials. However, due to various side effects, these medicines have fallen out of favor. Although the usual drug treatment for tics centers on alpha agonists and antipsychotics, other types of drugs may be of benefit as well with fewer side-effects. Clonazepam, for example, has shown modest tic-suppressing effects in various case series. This drug is particularly useful for patients with an associated anxiety disorder. Additionally, the dopamine-depleting drug tetrabenazine has possible efficacy. Additionally, local injections of botulinum toxin can also be considered when one or a few tics within the patient causes notable social distress, discomfort, or self-injury.

There are some simple tricks to cope with the condition while improving the symptoms in a child. These are as follows.

If a child is facing issues at school, parents must talk to the teacher about ways of dealing with the condition. Similarly, if an adult is facing difficulties at work, he/she must speak to the employer to find out ways that may help him/her adjust better at work.

It is frustrating to live with transient tic disorder. However, the condition is controllable with proper treatment. Patients are advised to keep their stress at moderate levels to help reduce the symptoms. Therapy and medication together can help alleviate symptoms in some cases. Parents of children with transient tic disorder also play an important role in implementing emotional support and helping ensure that their child’s education doesn’t suffer. Parents should keep a keen eye on developing symptoms as transient tic disorder can also develop into a more serious condition, such as Tourette syndrome.

Transient Tic Disorder At A Glance