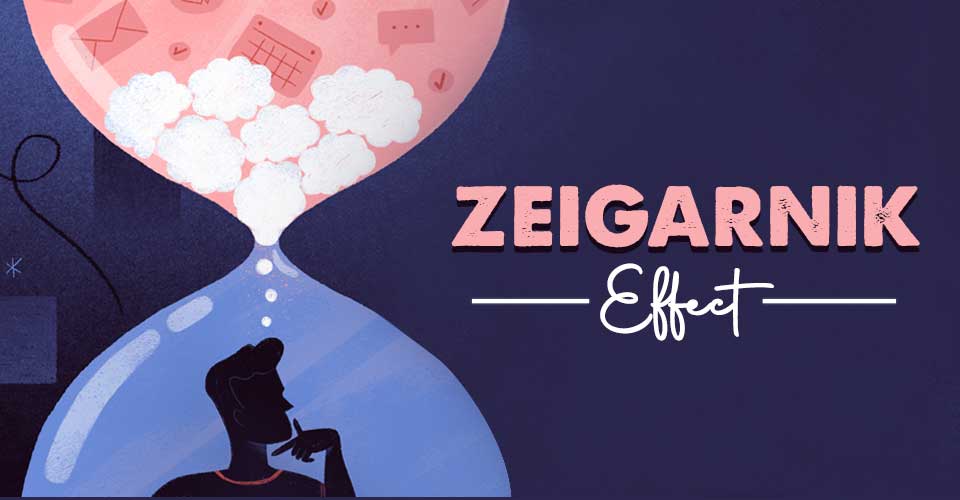 The Zeigarnik Effect refers to the tendency to better remember unfinished tasks than the ones that are completed.

What Is The Zeigarnik Effect?

The Zeigarnik Effect occurs when an activity which has been interrupted is more readily recalled. It is named after the Lithuanian psychologist Bluma Zeigarnik 1 , who first studied the phenomenon after her professor and Gestalt psychologist Kurt Lewin observed the effect of interruption on memory processing. Bluma, while studying at the University of Berlin, observed along with her professor Kurt Lewin that waiters in a cafe seemed to remember unpaid orders better than the ones that had been paid for. This seemed to suggest that completion of a task can lead to the same being forgotten more easily whereas unfinished tasks could be recalled more conveniently.

The effect has been used to support the general presence of the Gestalt phenomenon – the effect of a perceptual pattern or structure so unified as a whole that it cannot be derived merely by the summation of its components or parts. Gestalt psychologists summarize this view as “the whole is more than the sum of its parts”.

Discovery Of The Zeigarnik Effect

Bluma, while studying at the University of Berlin, observed along with her professor Kurt Lewin that waiters in a cafe seemed to remember unpaid orders better than the ones that had been paid for. This seemed to suggest that completion of a task can lead to the same being forgotten more easily whereas unfinished tasks could be recalled more conveniently.

Bluma tested this hypothesis in an experimental setting and published her findings in Finished and Unfinished Tasks 2 in 1927. In her experiment, she asked each participant to complete a series of separate and simple, yet concentration demanding, tasks. During their tasks, the participants were slightly interrupted by the experiment supervisor and then they were allowed to complete the remaining tasks without any interruption. At the end of the experiment, she interviewed each participant and asked them to recall the details of each task that they had attempted. The findings showed that the participants were able to recall details of uninterrupted tasks around 90% better than those that they were allowed to complete without any interruption.

Further research 3 was conducted by A. D. Baddeley, the results of which were published in 1963. In that, the subjects were asked to solve a series of 12 anagram problems for each of which only 1 minute was allowed. If they were not able to solve it in that time, the answers were revealed to them. At the end of the test, when they were asked to recall the solution words, they were better able to remember items that they had failed to complete almost twice as much as those that they had solved.”It is suggested that this phenomenon is analogous to the Zeigarnik effect, but that it has the advantage of occurring in conditions which are easy to specify and control.”, states the study. This supports the fact that people have better memory for interrupted and unfinished tasks.

The Zeigarnik Effect should not be confused with the Ovsiankina Effect which was discovered by and named after a colleague of Bluma Zeigarnik, Maria Ovsiankina. Ovsiankina Effect refers to the tendency to resume interrupted tasks at the next available opportunity. Maria, upon investigating the effects of task interruption found that there lies an inbuilt propensity to pick up such tasks where they were left with an intent to complete them. The willingness to resume such tasks in itself forces the mind to recall such tasks more effectively than the ones that are already completed and do not require any thoughts on.

How The Zeigarnik Effect works?

There are limitations to short-term memory 4 in terms of capacity and duration, and so it’s difficult to retain many things in memory. Trying to hold onto memories requires a bit of mental effort consisting of rehearsals. The longevity of the memory is directly proportional to the amount of effort that is put in.

Considering the example of the waiters, their profession entails them to remember a lot of details related to the tables they are serving, which consists of the food and drinks that each customer orders. They have to keep the details in their memory until the meals are finished and the bills are paid. In order to deal with the overload of information, they apply a number of mental tricks that allows them to better remember the details. The Zeigarnik effect is one such example of this. The information is held on to in the short term memory by constantly pulling it back into awareness. So by thinking of uncompleted tasks, which in this case are unbilled tables, the waiters are able to better remember them until the bills are paid and the customers leave.

However, this phenomenon is not limited to short-term memory itself. The more and the longer an information is pulled back into awareness, the stronger the memory for such information becomes, eventually pushing it to long-term memory. Failing to complete tasks basically creates a subtle cognitive tension in the mind, which requires more mental effort and rehearsals to keep the task at the forefront of awareness. The mind is able to let go of the obligation to complete the tasks once they are completed.

In spite of general acceptance, the Zeigarnik effect has been a matter of controversy. Studies were conducted in a few countries in an attempt to replicate the effect but failed to find any significant difference in memory recollection between subjects that were allowed to perform tasks without interruption and those that were interrupted in the process. Research papers published in 2003 in the Journal of Experimental Psychology: Applied by the American Psychological Association stated, “Our results showing no significant benefits of cognitive strategies suggest that the particular cognitive interventions tested may be ineffective in highly demanding work settings.”

Patients with different psychological disorders were examined to show Zeigarnik effect. Some of the findings are as follows :

A conceptual replication 5 of the effect was attempted on people with organic brain dysfunction and the data sample of 56 such retarted persons showed difference in recall of finished and unfinished tasks, establishing the Zeigarnik effect in that population.

2. In schizophrenic patients with obsession

Upon examination 6 of 76 schizophrenic patients with obsessive symptoms for the Zeigarnik effect, the phenomenon was found to be present in such patients that possessed symptoms of phobic disturbances with relevant defense measures evidencing adequate hierarchic structure of motivation. The effect was absent in patients with obsession transforming into conditions close to catatonic stereotypes.

It’s a general understanding that work related stress causes sleep impairment. The Zeigarnik effect has a direct impact on sleep disorder in employees especially on the weekends. Interrupted and left over tasks tend to bother them during the off days and they intend to resume the tasks with an intent to finish them at the earliest opportunity. The stress induced by this phenomenon causes them to lose sleep during that time.

As per a study 7 based on the role of rumination as the underlying mechanism for sleep impairment in employees, it was found that unfinished tasks work as a stressor which results in sleep disorder in working employees, especially on the weekend. Rumination refers to the process of thinking about the same thoughts for a prolonged period of time, and it is in itself not a very healthy habit to possess. It often leads to harboring sad and dark thoughts which is immensely harmful to one’s mental health as it can prolong and intensify depression and anxiety and also impair one’s ability to think and process emotions, as studies 8 suggest.

Zeigarnik effect in employees, therefore, causes them to lose sleep to the thoughts of their pending work, the catch being that they are eager to get to work at the earliest but the weekends are time off from work.

A 2011 research 9 shows that making plans can eliminate the cognitive effects of unfulfilled goals. Making plans for unfinished tasks contributes to the goal of completing the tasks and satisfies the cognitive processes that promote goal pursuit. The study shows that commuting to a specific plan for a target or goal not only facilitates attainment of the goal but also frees the cognitive resources for other tasks. “Once a plan is made, the drive to attain a goal is suspended–allowing goal-related cognitive activity to cease–and is resumed at the specified later time.”, explains the study.

Application Of The Zeigarnik Effect

Common sense might dictate that the best way to be productive is to approach a goal, but the Zeigarnik Effect suggests that being interrupted boosts in memory retention related to specific tasks at hand. Based on this notion, the following methods can be applied to utilize the effect to one’s advantage :

Procrastination is the act of postponing or delaying a task, which often leads to gradual accumulation of stress. The way to cope with it using the Zeigarnik effect is to start with the first step. Once the task begins and is interrupted, the mind will ponder over it and that will act as a motivation to take further steps to eventually complete the task. This approach, apart from generating motivation, also gives a sense of accomplishment upon finishing the work and once done, the mind is free to apply its energy elsewhere.

2. Breaking up of study sessions

Students with attention deficit hyperactivity disorder (ADHD) are advised to break up their study sessions. Interruption in their sessions will help them return to the information they were trying to memorize, which will eventually help them with the intended process.

The Zeigarnik effect helps boost sales for advertisers and marketers. The same happens in case of film promotions. The relevant contents or ads are to be shown to the audience by leaving our critical details, which would grab their attention.

Incomplete tasks can cause stress and anxiety, which can lead to sleep disturbances. However, the drive to complete such tasks can be perceived as motivation and that in turn would help boost the productivity and render a sense of accomplishment and satisfaction after successful completion of the tasks.

What Can Be Done?

Based on the information mentioned above, it’s evident that the Zeigarnik effect plays a significant role in human lives. It is a phenomenon that has negative effects on mental health, however with some effort it can be added to one’s advantage. It’s not a psychological disorder, and therefore cannot be cured. However, for any adverse effect on one’s mental health as a direct or indirect impact of the Zeigarnik Effect, it is advised to seek psychiatric help from a professional.

Zeigarnik Effect At A Glance