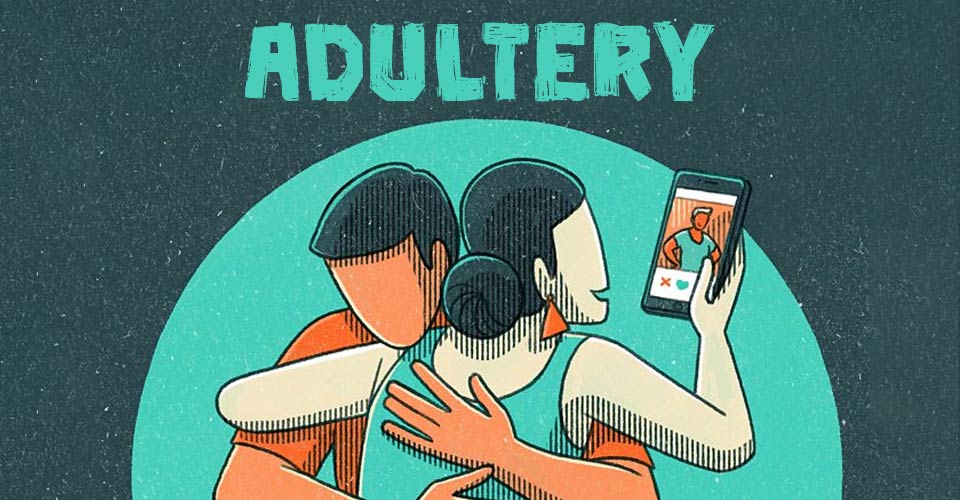 Adultery refers to an intended, consensual, extramarital sexual relationship or encounter between a married person and someone other than that person’s current partner or spouse. It is considered objectionable on moral, social, legal as well as religious grounds.

Adultery refers to being unfaithful towards a romantic partner or spouse. It is about violating the beliefs among partners that their relationship is exclusive and being emotionally or sexually disloyal with one’s romantic partner by having romantic and/or sexual involvement with another person outside the relationship. It signifies a destruction of promise or commitment made to the significant other in the original relationship or marriage. Such acts or behavior can often lead to various negative emotions such as anger, jealousy, vengeance and lead to relationship dissolution. “Relationship infidelity is usually damaging, frequently leading to psychological distress both for those who engage in infidelity and for their partners, as well as to relationship distress or dissolution,” explains a 2017 study 1.

Also known as cheating, infidelity, having an affair or being unfaithful, adultery primarily represents a breakage of trust and promise that one partner makes to the other about being faithful and loyal. Although it is an unspoken rule, it serves as one of the core principles of any romantic relationship. However, it can often be difficult to define adultery clearly as it depends on various factors. A person may think about cheating on their partner and may feel disconnected with them without acting on it. They may engage in certain non-sexual behaviors or avoid sexual contact with another person, such as developing emotions for another person, chatting or sexting with someone they like, flirting with others or spending more time with someone other than their partner. For some individuals, such behaviors may be considered as cheating, while for some others only direct sexual interactions or contact with someone outside the relationship may be seen as cheating. Moreover, infidelity may also depend on the terms of the relationships, expectations and boundaries among partners. Regardless, as exclusivity 2 is typically a widely expected and assumed aspect of any romantic relationship, engaging with another person, whether emotionally or sexually, can be considered as adultery in the general sense.

Although innocent flirtation or emotional involvement with someone else can be seen as adultery, it is typically characterized by the act of voluntary sexual relations between a married person and someone they are not married to. The concept of this act exists in several cultures and quite similar in Christianity, Judaism, and Islam. The legal definition of it varies in different jurisdictions and statutes. However, many jurisdictions view it as offensive to public morals or as a mistreatment of the relationship of marriage. While it is not an illegal act in a few developed nations, it is still an acceptable reason for someone to submit a petition for a divorce. Infidelity in marriage is usually damaging as it frequently leads to psychological distress for those who engage in the act and their partners, as well as to relationship distress or dissolution. Research 3 says that the most commonly reported major contributors to divorce are lack of commitment, acts of infidelity, and repetitive conflicts or arguments.

A 2017 research paper 4 suggests that it is quite difficult to specifically address or identify the predictors of relationship infidelity. This study explains that infidelity in a previous relationship is not considered a risk factor in a subsequent relationship. “Although the vast majority of romantic relationships in the United States include expectations of monogamy, infidelity is widespread, with estimates of lifetime engagement in extra-relational affairs around 20% for married couples and up to 70% for unmarried couples,” the researchers added. It estimated the prevalence of infidelity, as the open-ended reason for divorce, is endorsed by 59.6% of individuals and by at least one partner in 88.8% of couples. According to a 2019 study 5, certain demographic factors, personality traits, and other sexual details such as the partner’s characteristics have a huge impact on infidelity.

Research has found that 22% of people worldwide admitted to having extramarital sexual relationships. Another report 6 found that 50% of males and 26% of females were engaged in extramarital sexual intercourse at least once during their lifetime. One 2007 study 7 estimates the annual prevalence of infidelity is 2.3%. This study adds, “Controlling for marital dissatisfaction and demographic variables, infidelity was predicted by greater neuroticism and lower religiosity; wives’ pregnancy also increased the risk of infidelity for husbands.”

Mutual trust is the key feature of committed romantic relationships that infidelity can wreak havoc in. Several studies 8 have reported that it is the leading reason behind marital divorce and pre-marital break-ups. A 2015 research paper 9 says that infidelity can trigger domestic violence, can cause poor mental health such as depression, anxiety. Here are five commonly observed causes of infidelity.

Sometimes, it is not the outcome of a problem with an existing relationship, rather it is the response to boredom. Boredom is considered one of the leading causes of adultery. People follow a routine life that takes all the excitement out of them. This situation often leads to the unsatisfied partner cheating who tries to seek something new, exciting and thrilling. A 2013 study 10 reported that people younger than 50 years were motivated by boredom to cheat on their partners.

Studies 11 considered substance use as one of the most common reasons behind infidelity in committed relationships. Addiction allows a person to get into detrimental habits such as lying, stealing, and cheating. Overconsumption of alcohol makes people lose their inhibition and they may fall for temporary infatuation or sexual attraction.

It may seem counterintuitive, but certain people have extramarital sexual affairs only to boost their ego and self-esteem. A 2014 study has shown that more than half of participants indicated enhancing their self-esteem by cheating their partners.

It is one of the glaring causes of infidelity that allows people to have an extramarital relationship because of their sexual desires. Studies imply that people who don’t have a fulfilling sex life are more likely to cheat on their partners.

A 2019 research paper 12 explains that some people try to seek love out of their existing relationships because they feel extremely unwanted or neglected. Such situations occur when one partner is having a busy and successful life and does not make time for their partner. People engage in infidelity as a response to their partner’s lack of attention.

Apart from these, there may be some other common causes for adultery in romantic relationships, such as –

Adultery has been a reality across cultures over the course of human history. The act of infidelity was very common among ancient Greeks, Romans, Japanese, Chinese, Hindus, and pre-industrial Europeans. The following are some of the cultural and religious associations of infidelity and cheating in relationships.

A 2001 research paper explains that classical Greeks and Romans strengthened strict laws against infidelity, but those laws were applied only to sexual intercourse with a married woman. In early Roman law, it was not a matter of offense against the wife for a husband to have a sexual relationship with a slave or an unmarried woman.

Though the Judaism law prescribed the death penalty as the punishment of infidelity, the legal procedure required the testimony of two eyewitnesses of good character for conviction. Before performing the act, the defendant must have been warned immediately. However, no death penalty applies in recent times.

The act of infidelity was considered an immoral sin in many countries where Christianity is the dominant religion, especially in Roman Catholic countries. But research suggests that it was decriminalized in Argentina in 1995 and Brazil in 2005.

An illegal, premarital, or extramarital intercourse is termed Zina in Arabic. A 2018 study suggests that under Islamic Law, it is considered a violation of the marital contract and one of the major sins condemned by God in the Quran. The legal authorities have reserved the punishments and similarly any false accusation is subjected to be punished severely. Research suggests that several Muslim countries that follow Islamic law for criminal justice, allow stoning as the punishment of adultery. A 2014 study 16 has shown that around 15 countries authorized stoning as lawful punishment, but it is legally carried out only in Iran and Somalia.

Historically, Hindu law was strictly against infidelity for both moral and social reasons. Incidents regarding the husband having illicit relations with other women or wives cheating their husbands were quite familiar in ancient India. It was never favored in Hinduism and established as a mortal sin. Research shows that Hindu mythology illustrates several legends where deities engaged in adulterous actions. According to studies, in Hinduism infringing the sacred commitment of marriage leads to bad karma and ruthless punishment.

Buddist texts describe adultery as a form of sexual wrongdoing that is one link in a chain of immorality and misery. There are some significant differences between the Buddist texts and the Hindu texts on the consequences and the identification of infidelity.

Adultery And The Law

History suggests that many cultures considered adultery an extremely serious crime, some of which are subjected to severe punishment, with penalties including torture, mutilation, and capital punishment. From the 19th century, such punishments have gradually fallen into disfavor in Western countries. Criminal laws against infidelity have become controversial since the 20th century, with most Western countries decriminalizing it. Those jurisdictions that decriminalized this act of adultery, subjected certain legal consequences. Infidelity constitutes a ground for divorce under almost all jurisdictions and it may be an important factor in the custody of children, property settlement, and the denial of alimony. The legal definition of it categorizes the act as a consensual physical correlation between two individuals who are either not married to each other or both are married to someone else.

However, it is not a criminal offense in several countries including European Union, Austria, Belgium, Finland, Sweden, and Britain. The United States is one of the few industrialized countries that prescribes criminal laws against infidelity, but the laws vary from state to state. However, the basic understanding of infidelity in the ancient period and modern times is a little different and the punishments also differ.

One of the significant issues about the concept of adultery is the issue of the paternity of a child 17. The legal definition of infidelity describes the acts as a criminal offense. Thus, the purity of the children in a marriage may be corrupted. However, modern advances such as paternity testing, contraception have changed the situation. Many jurisdictions prescribe legal presumptions that the woman’s husband is the father of her children born during that marriage. Meanwhile, some jurisdictions have restricted the possibility of legal rebuttal. As the children born out of extramarital relationships used to suffer, most jurisdictions of developed nations support the adverse legal and social consequences 18.

The basic idea of infidelity is not a single defined situation. It varies among different couples and even between partners in a relationship. While several issues such as lack of affection, feeling rejected, boredom, sexual dissatisfaction, alcohol addiction, lack of communication lead to a partner cheating on another, it may cause certain major mental illnesses including depression, anxiety. Recovering from an extramarital affair can be the most challenging chapter in someone’s life. One needs to take some time to rethink their decision before choosing to continue or end their existing commitment. Getting help from a professional therapist or other reliable sources such as consulting with a marriage counselor is considered extremely helpful in this regard.

Adultery At A Glance