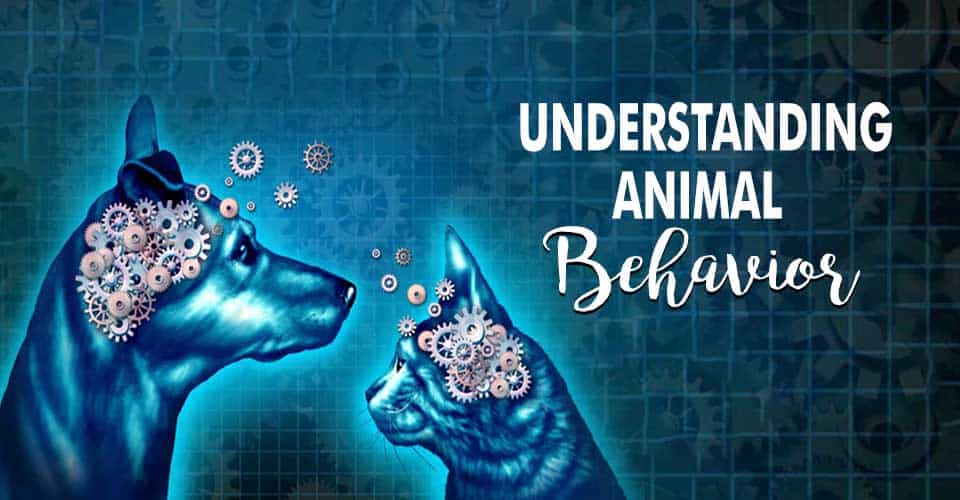 The concept of animal behavior refers to everything that includes how animals respond to their environment and other organisms.

What Is Animal Behavior?

The study of animal behavior refers to observing and understanding how animals live, behave, survive and reproduce in their natural habitat. Developed from Ethology, the focus of this field is primarily on evolutionary adaptivity. It may also involve studying the responses and behaviors of animals to specific stimuli or analyzing trained reactions in controlled settings. According to researchers, “Animal behavior is the study of how animals move in their environment, how they interact socially, how they learn about their environment, and how an animal might achieve cognitive understanding of its environment.” The concept typically involves all actions, movements and behaviors that animals display and evaluating their psychological underpinnings.

Behavior of all organisms is an outcome of motor & computational activity of certain circuits which is associated with various cognitive activities like decision-making, memory, learning etc. Hence, studying the behavior of animals is a crucial aspect of psychology which enables us to understand how they have evolved, how they communicate with one another, interact with other species and the environment. Understanding their behavior enables researchers to better understand human behavior, a field of study identified as comparative psychology. “An important element of behavioral research with nonhuman animals is that insights are drawn from it about human behavior, what is called here the human side of animal behavior,” explains a 2001 study 1 .

The study of behavior in animals also plays an important role in the conservation of species. It facilitates conservation efforts and successful breeding of endangered species in captivity by gaining a better understanding about their mating rituals and habits, parent-child interactions and unique habitat requirements. It also enables researchers to understand the positive and negative impact created by humans on wild populations.

Animals are very different from each other regarding their behavior. There are two types of behaviors observed in animals- the ones they are born with, and the others they learn during their lifetime. Animal behaviors can be characterized by how animals communicate with other species members, with the physical environment, and with other organisms. It is about how animals interact socially, how they learn about their environment, how they move in their environment. It is also about how the animals achieve a cognitive understanding 2 of their environment. It can be defined as the change of activity of an organism of the animals. The organism’s activity changes in response to a stimulus 3 . A stimulus is considered a cue or combination of cues in the environment that can produce behavioral reactions. The activities, underlying mental processes, their movements – everything that animals do are referred to by the behavior. The objective and scientific study of animal behavior is known as Ethology 4. It is closely related to cognitive functions of the brain, such as memory, learning, and decision-making. Cognitive psychology proposes another way to study behavior. It is considered one of the most exciting and dynamic areas of science.

The origin of scientific study came from the European thinkers of the 17th-19th centuries, such as Charles Darwin 5 , John Ray, and Charles LeRoy. The complexity and purposefulness of the actions of animals are appreciated by these naturalists. These three suggested that the understanding of animal behavior requires long-term observations 6 . Charles Darwin’s On the origin of species (1859) 7 played a pivotal role in this study. He devoted a whole chapter named Instinct in his book. In this chapter, he raised the concern that anatomical behavioral traits can develop as a result of natural selection. According to Darwin 8 , animal behaviors are considered adaptations. It helps animals to reproduce and survive. Darwin’s achievement explained that adaptation is the result of the basic characteristics of living organisms, such as inheritance, differential reproduction, and variation.

The study of behavior is about understanding the physiology and anatomy of animals. It unfolds how physiology and anatomy are integrated with behavior. Animal behavior is caused by both external and internal stimuli. The external stimuli such as threats from other animals, weather conditions, sounds, smells, and internal information such as hunger, fear, anger are responsible for prompting behavior. Studies 9 have shown that genes and the environment hugely contribute to shaping behavior. The animals’ flexibility with the environment provides them the opportunity to adjust to the changes. Genes detain the evolutionary processes to select the behavior.

It contains developmental, structural, psychological, physiological, hereditary, and cognitive aspects of behavior. The mechanisms that are directly underlying the behavior are known as proximate causes 10 . For example, when an animal gets separated from its herd, the situation may trigger the behavior associated with fear reactions. It makes the animal behave in a way that can help it to reunite with the herd. The separation triggers the underlying hormonal response, and is considered the proximate cause of the behavior.

Animal behavior largely depends on animal genes. But genes are not the only driver of behavior. However, the development involves many factors. The life of animals undergoes a series of constant and permanent changes. These changes are the result of the communication between genotype, phenotype 11 , and environment. The genetic characteristics of a living organism, the genes in a DNA responsible for creating a specific trait, are known as the genotype. The physical characteristics of a living organism are called the phenotype. These factors are responsible for modifying and shaping individual behavior.

The study of animal behavior is considered to be a broad field. The scientific study is also known as Ethology. It includes both innate and learned behavior along with abnormal behavior. Most of the behaviors can be observed in all animal groups, while certain behaviors may be present in only specific individuals depending on the different situation or locations. The behavior of animals provides insight into their mental states.

Innate behavior refers to a behavior that is genetically hardwired in a living organism. An organism born with this inherited behavior. It doesn’t have to be learned. This kind of behavior is very predictable. Innate behavior patterns can be observed for the first time when an animal reacts to a particular internal or external stimulus. The animals with a short life span mostly have innate behavior. In the case of insects, they don’t learn from their parents as they are either dead or have moved away from the larva. That’s why insects behave innately with their environment. Animals learn to react instantly because of innate behavior. For example, when a female bird lays eggs, the male one builds an elaborate nest. Moths fly toward the light, but a cockroach runs away from it.

Three types of innate behavior can be observed in animals that include:

Instinctual behavior 12 is characterized by its complex pattern. This behavior forms within an animal when it starts to recognize a stimulus. Animals are compelled to engage in instinctual behavior. This process continues until the animal performs all parts of the behavior. This behavior may take a long period to form completely. For example, spiders spin a web precisely and correctly every time on the first try though spinning a web is a complex job.

Reflexes 13 are the simplest form of innate behavior. It can be characterized by a rapid, automatic, and involuntary response to the stimulus. Mostly it doesn’t contain a message from the brain. A reflex message transmits between a sense organ to the spinal cord and the back of a muscle through a nerve. This process doesn’t involve the brain. One can be aware of this only after it has happened. The body responds automatically to this. The behavior doesn’t form because of any conscious thinking. For example, sneezing, jerking the hand immediately after touching anything too hot or cold, yawning, kicking after getting a tap on the kneecap with a rubber hammer, or a baby sucking at anything that touches the roof of its mouth.

This kind of behavior is considered to be the result of experience and practice. It develops during an animal’s lifetime. The learned behavior 15 may contain some innate components, but it allows the animal to adapt to the environmental changes. This behavior generally contrasts with the innate one as it is modified by previous experiences. Wild animals adapt learned behaviors to learn specific ways to survive and domestic animals adapt learned behaviors for training. It helps the animals to get comfortable with new situations and problems. Learned behavior can be observed mostly in fish, reptiles, amphibians, birds, and mammals. Learned behavior is essential for animals with a long life span. For example, a dog learns to sit when instructed, or a dog moves after hearing the sound of a metal bowl as it signals to the food being served.

Animals may learn behavior in different types of ways. The most common learned behavior of animals include:

Imprinting 16 is a kind of learned behavior. It occurs when an animal recognizes a social attachment. Adult animals have more experience in escaping, finding food, getting along with the environment, but the young ones don’t. The concept of imprinting is developed by Australian Naturalist Konrad Lorenz 17 . He experimented with geese and discovered that geese follow the first moving object they notice after hatching just like their mothers. Imprinting occurs during a specific stage of life, during the development of the animal. For example, when a baby animal accepts a person or an environment.

B. Trial and Error

It is considered to be the result of associate learning. Conditioning refers to a process through which animals learn new behaviors. The behavior is modified in conditioning. In this process, a particular response to a stimulus is associated with another response to a stimulus. For example, when someone puts his/her hands on the top of an aquarium, all fish swim to the top of the tank expecting food. This happens because a hand shape above them means food according to their learning. Conditioning can be divided into two forms – Classical conditioning and Operant conditioning.

Ivan Pavlov 19 experimented with classical conditioning with dogs. In this experiment, he tried to condition the dogs to drool which is a response associated with food. Classical conditioning is characterized by a stimulus that is associated with the second one with which it had no connection previously. For example, a dog drools or salivates after seeing some food or smelling some food.

Operant conditioning 20 is a little different as it is not associated with an existing stimulus-response pair. It refers to the learning method that is connected with a reward or punishment for the behavior. Operant conditioning contributes hugely to everyday learning. In this process, an association between the behavior and the behavioral consequence is being created. The consequences can be both positive or negative. For example, when rats press a lever after observing the green light in a lab experiment, they are rewarded with a plate of food.

“Abnormal behaviour is defined as an untypical reaction to a particular combination of motivational factors and stimuli,” explains a study 21 . Most of such behavior is considered as a coping mechanism and response to stress. It is essential to observe the behavioral patterns of animals to identify their abnormality. Sometimes, the instances of animal behavior can be life-threatening to the animals and even to the owners. It can be dangerous for the animal’s long-term survival. Abnormal behaviors are mostly the results of sudden change of the environment’s nature, welfare needs that are not being met, and any other physical or mental trauma. Some specific abnormal behavior of animals include tail biting in pigs, sudden inappropriate aggression in dogs due to any disease or trauma it is suffering from, feather pecking in poultry, fin nipping in fish.

The study of animal behavior is considered to be one of the main pillars of psychology. It sheds light on the ways animals react to their surrounding environment and to other organisms along with the reason behind their behaviors.

Animal Behavior At A Glance