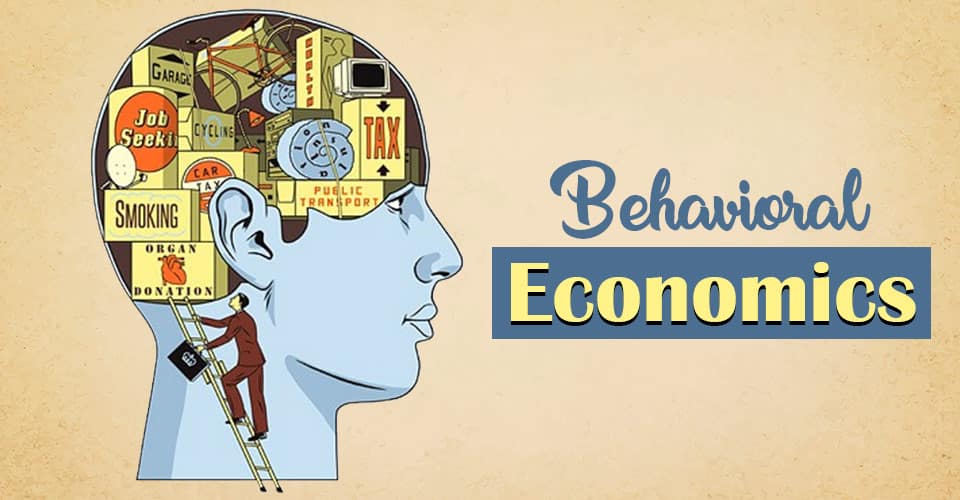 Behavioral Economics is the study of psychology as it relates to the economic decision-making process by individuals and institutions. It uses the intelligence of human psychology to consider why people differ from rational action when they’re making decisions.

What Is Behavioral Economics?

”Behavioral economics refers to the field of research that merges the techniques, methods, and theories of psychology and economics to study, discover, and demonstrate the economic behavior of real people”, explains Mind Help. In other words, this field combines ideas from psychology and economics to provide relevant insight that individuals are not behaving in their own best interests. The field uses the perception of human psychology to judge why humans diverge from rational action when they’re making decisions. Systematic errors or decisions recur predictably in particular circumstances. Learnings from behavioral economics can be used to create an environment that pushes individuals toward wiser decisions and healthier lives.

A 1999 study 1 states that ”behavioral economics enhances the realism of the psychological assumptions underlying economic theory”, thus, promising to reunify psychology and economics in the process. Reunification should result in better assumptions about this branch of economy along with better policy prescriptions. Since economics refers to the science of how resources are allotted by individuals along with collective institutions like firms and markets, the psychology of individual behavior should carry and inform economics. The study also states that a recent approach of behavioral economics attempts to ”use psychology to inform economics” while sustaining the importance of mathematical structure and explanation of field data that separates economics from other social sciences. In fact, this concept embodies a reunification of psychology and economics rather than creating a brand new concept as early thinking about economics was shot through with psychological insight.

It must be noted that the concept of behavioral economics has developed against the backdrop of the traditional economic approach, also known as the rational choice model. According to the concept of traditional economics, individuals are supposed to act rationally. People are expected to weigh the benefits and drawbacks of action and then choose the option in their own self-interest. Such individuals are assumed to have self-control while repressing the impulses that may prevent them from achieving their long-term goals. The theory of behavioral economics is used to describe everyday decisions, such as what people buy, how they manage their finances, and whether or not they make healthy lifestyle choices.

This field involves economics and psychology to understand why we tend to make irrational decisions at times, as well as why and how our thoughts, behavior and actions are not similar to the assumptions of economic models. According to a study 2 , behavioral economics has received increased attention in recent years as the conventional consumer decision-making model was unable to comprehensively explain human behavior. It must be noted that this concept in economics is not a new concept and that it was first highlighted in the 1980s by Richard Thaler. He popularized his views of human rationality and indicated the importance of the endowment effect along with mental accounting, concern for justice, and various other irregularities in economics. The study also states that as a department of economics, this concept is highly relevant as primarily, economics is the study of human behavior while dealing with consumer decisions to allocate resources. In this regard, the concept exhibits theoretical and methodological means of understanding human behavior. It is done by combining the principles of behavioral science and micro-economics.

In an ideal world, people would always make rational decisions that would provide them with the greatest benefit and satisfaction. In economics, the rational choice theory states that when humans are offered various options under the conditions of scarcity, they would choose the option that maximizes their individual satisfaction. This theory believes that people, given their choices and limitations, are capable of making rational decisions by effectively balancing the costs and benefits of each option available to them. The final decision made will be the best choice for the individual. However, behavioral economics explains that humans are not rational and are incapable of making good decisions. Since humans are emotional and easily distracted beings, they make decisions that are not in their self-interest.

Behavioral economics can notify a variety of real-world phenomena, including –

All of these are crucial economic issues with tremendous monetary and lifestyle implications for all of us. The idea has captivated supporters in academia, industry, and public policy along with criticism from sceptics, who question its contribution and methods.

1. Bounded Rationality- It is a concept whereby an individual makes a decision based on limited information and from a narrow range of heuristics 3 (simple rules).

2. Choice Architecture– According to this concept, a consumer’s choice is determined by the way goods are presented. For example, complementary goods placed together can help sales.

3. Cognitive Bias- It is a concept that determines the way humans look at certain issues with prejudice. For example, individuals agree to see data that confirms their point of view, and how they filter out data that is inconvenient.

4. Discrimination- A concept whereby individuals discriminate on grounds of age/sex.

5. Dual-System Theory- It is the idea that suggests humans have two decision making elements. While one is impulsive, the other one is comparatively rational, cognitive, and analytical.

6. Endowment Effect- As per this concept, humans give greater importance to what they already have.

7. Fairness and Reciprocity- This concept highlights the significance of fairness and returning favors in economic decisions.

8. Gift-Giving- Giving gifts is an important aspect of social life as transactions like these do not fit into standard supply and demand analysis.

9. Herding Behavior- It is defined as the tendency of individuals to support the collective perceptions and beliefs of the majority, particularly in regards to finance.

10. Irrational Exuberance- A condition when individuals get carried away by rising asset prices.

11. Mental Accounting- It determines how individuals distribute their budget into different accounts, limiting spending on particular aspects of expenditure.

12. Optimism Bias- Optimism bias is a type of cognitive bias in behavioral economics. It enables people to think they are more likely to succeed or are at less risk of falling or experiencing a negative event than they assume in reality.

13. Present Bias- A tendency to value payoffs in the present moment more than equivalent costs/benefits in the future. Also, we can discount future payoffs in a time-inconsistent way.

14. Prospect Theory- It is the idea that determines how individuals suffer comparatively more from losses than gains. It also places importance on a relative starting point. Thus, individuals judge their utility from their loss/gain, rather than their finishing point.

15. Rational Economic Man- This is the standard view of individual behavior. It assumes that individuals are rational & well informed and seek to maximize their utility. This department of economics is based on questioning this conventional wisdom.

16. Reciprocity- It is a concept that says how humans try to reciprocate to strong social pressure. For example, if an individual is treated badly, he/she will seek to punish the person, even if it leads to the loss of his/her own utility. In the same, an individual will try to reward good behavior.

17. Salience- A condition where individuals give greater importance to a recent bad event. For example, if someone has faced a bad experience with a particular product, he/she will never want to use it again.

18. Social Norms- A concept that determines how decisions are influenced by social norms rather than personal decisions of utility.

19. Status Quo Bias- Choosing to stick to an existing situation rather than risking change.

20. Sunk-Cost Fallacy- Placing too much importance on sunk costs that is irretrievable.

Humans, instead of making optimal choices, often behave in ways that seem unreasonable and even against their own interests. Behavioral economics demonstrates why individuals make irrational choices by explaining how their decision-making is influenced by:

Additionally, decisions must be made under conditions of great uncertainty. This precisely means that individuals are not much aware of all the risks and benefits of a choice or where those features are constantly shifting. Behavioral economics strives to learn the consequences of uncertainty on decision-making in the realms of consumer purchasing, financial savings, and lifestyle changes.

New research directions influenced by ideas and theories from behavioral economics have started to use techniques developed in cognitive neuroscience. Progress in brain imaging technology along with clinical studies using patients with brain injuries, compared to normal subjects have been used to examine which neural substrates determine economic decision making. This new area, coined as neuroeconomics, has carved out the path to inquire questions revolving this concept. Neuroeconomics not only caters to exhibiting brain regions connected to specific behavior but also in recognizing neural circuits or systems of specialized regions that control decision, choice, and judgment.

According to a study 4 , David Laibson of Harvard University, Sendhil Mullainathan of the Massachusetts Institute of Technology, George Loewenstein of Carnegie Mellon University, Colin Camerer of the California Institute of Technology, and Matthew Rabin of the University of California at Berkeley have now become the representatives of of this idea, especially for those interested in behavioral economics. Inspired from empirical and experimental counter-evidence to the strong rationality theories, applied in mainstream economics along with the rise of the metaphor of the brain as an information-processing device in cognitive psychology, these researchers formalize and test psychological predictions.

After recognizing ways in which behavior differs from the mainstream model, they show how other theories can explain apparent irregularities. Along the way, they also argue that market forces such as competition and arbitrage, learning on the part of decision-makers, and some sort of evolutionary device cannot eliminate the importance of their insights. The study also states that the new idea relies heavily on experiments as experimental control is particularly helpful for identifying behavioral explanations from standard ones. In addition, the newer concept uses ﬁeld data, ﬁeld experiments, computer simulation, brain scans, and so on

Behavioral economics attempts to enrich the classical theories of economics to build better theories, concepts, and models about economic decision making. By integrating psychological factors into economic theory, behavioral economists strive to enhance and augment economic theory instead of replacing the contributions of traditional economics. This way, they can develop a complete and realistic view of economic behavior. It also strives to develop an understanding of the financial choices that are an important part of everyday life.

Through experiments and field data, behavioral economics was able to examine new ideas about how people make economic choices in a variety of settings. Such evaluations were made with the effort to create better predictive models of economic and financial decision making, in order to help everyone make better financial choices.

Behavioral Economics At A Glance

Treatment And Coping For Cluster B Personality Disorder