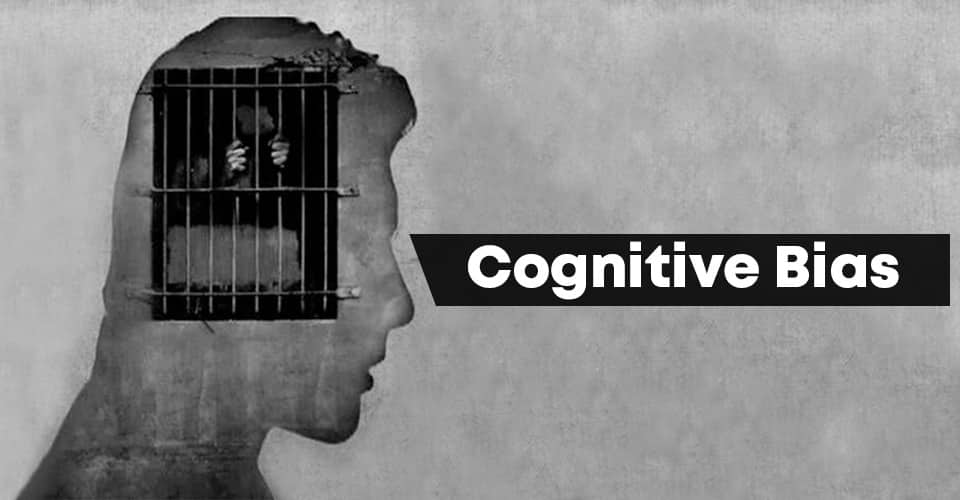 Cognitive bias is a shortcoming of an individual’s reasoning abilities about the world around them that leads to misinterpretation of information and an absence of resolution.

What Is Cognitive Bias?

Cognitive Bias is the error in reasoning that occurs when an individual misinterprets information about the world around them which influences their decision-making abilities. It usually occurs as a result of our brain’s attempt to simplify information to arrive at an effective conclusion. Researchers Amos Tversky and Daniel Kahneman first introduced this concept in 1972. Biases are often used as a rule of thumb that allows someone to make sense of the world and reach decisions effectively.

Cognitive bias can influence our decision-making skills, problem-solving skills, damage the reliability of our memories or our ability to respond in a crisis situation. This can also contribute to developing anxiety and depression or impair relationships due to the negative outcomes experienced by the influences of our cognitive biases. For instance, conspiracy theories 1 are often influenced by a variety of biases. But cognitive bias doesn’t always negatively influence all our decision-making abilities. Psychologists believe that our biases allow us to make decisions quickly.

It is probably not possible to avoid cognitive bias. The human mind is wired to chase efficiency which means that most of our reasoning skills required for daily decision making arise from automatic processing. However, studies 2 have shown that humans are capable of recognizing situations that are influenced by their biases and hence are more likely to operate better while attempting to rectify them. It is possible to mitigate our biases through learning and questioning the decisions we take and what has influenced our thoughts to arrive at that particular conclusion. A 2016 study 3 showed that at least one cognitive bias or personality trait affects our decision-making. A scientific study 4 found that cognitive biases may also increase as people get older, due to decreased cognitive flexibility.

There are almost 175 categories associated with cognitive bias. However, some of the most common and well-known cognitive biases are mentioned below:

The actor-observer bias usually involves understanding the difference between how we explain others’ actions and how we explain our own. For instance, some people explain someone else’s actions as “it’s their character” or some internal factor. However, when explaining similar situations we often attribute our actions to external factors such as attributing your high cholesterol levels to genetics as opposed to poor diet or lack of exercise.

This is the dire tendency to make decisions based on the very first piece of information an individual learns. What a person first learns in an investigation will largely influence their judgment rather than the information received later on.

This cognitive bias involves a tendency to pay attention to certain things while ignoring others that don’t interest them. It is evolved as a survival mechanism in humans. In order to survive, animals have to avoid threats. Hence, out of the million pieces of information that influence the senses daily, people must choose which ones are the most essential in terms of health, happiness, or safety.

People tend to seek and interpret information in ways that confirm what they already believe in. Confirmation bias 5 makes some people ignore information that is conflicting with their beliefs. This tendency is found to be more prevalent than any other biases since people receive news from social media outlets that feed information based on the person’s preferences. A scientific study 6 suggested that confirmation bias operates by the conscious or unconscious assimilation of evidence that is consistent with one’s assumptions and rejecting any contrary evidence associated with it.

Dunning Kruger Effect is characterized by the inability to recognize one’s own lack of competence in any particular area. Researchers found that some people express a high degree of confidence about something they are not really good at or skilled at. This cognitive bias is present in all areas such as recreational card playing 7 or medical examinations 8 .

Optimism bias can cause a person to believe that they are less susceptible to hardships than other people are and more likely to achieve success. A 2012 study 10 found that whether people are making predictions about their future wealth, relationships or health, they usually overestimate success and underestimate the negative outcomes. This happens because people tend to selectively update their beliefs as and when things turn out in their favor.

In negative circumstances, people have a tendency to blame external factors for causing it. However, if something goes wrong in someone else’s life they might wonder whether the individual was somehow responsible or an internal characteristic that led them to this unfavorable outcome. Self serving bias 11 also leads an individual to credit themselves to their internal qualities or habits when a positive outcome arises.

All individuals exhibit different forms of cognitive bias whether they realize it or not. It is easier to spot it in others than in ourselves. Our thinking is always influenced by some type of biases. A report 12 found that biased decisions occur when an individual’s cognition is affected by “contextual factors, information structures, previously held attitudes, preferences, and moods”. Some signs that you might be influenced by any form of cognitive bias are:

Sometimes individuals tend to analyze every possible option when making decisions. Some people take a lot of time to even make the simplest decision. This can be due to the complexity present around the world and the information perceived from it. It becomes necessary for some people to resort to mental shortcuts in order to act quickly and make effective decisions.

A 2018 study pointed out that cognitive bias can be caused by various things but it is usually the mental shortcuts that we usually take, known as heuristics that plays a significant role. Although it can be useful in some circumstances, it may also lead to errors in judgment as well.

Other causes that may contribute to cognitive biases are as follows:

In a 2020 study of understanding the relationship between cognitive bias and entrepreneurship intention, it was found that optimism and overconfidence are closely related to cognitive bias. Even though bias is seen as a negative effect, it is often used to make quick decisions. In this case, optimists tend to ignore uncertainty and are slightly aware of the levels of risks. On the other hand, overconfident entrepreneurs tend to overestimate the probability of a positive outcome by treating assumptions as facts and using these facts to make decisions. Thus, it is seen that emotions and individual motivations can cause cognitive biases.

Sometimes we use mental shortcuts (heuristics) to make quick decisions. This enables our minds to limit the ability to process the additional information that was required to be reviewed in order to make a decision.

A 2014 study 13 found that there were consistent self-reports of lower resistance to peer influence among adolescents. Peer pressure is a contributing factor to make risky decisions. Crime statistics suggest that adolescents typically commit delinquent acts in peer groups. Thus, peer or social pressure may contribute to biases in the decision-making process.

Introspection illusion occurs when an individual wrongly thinks and claims that they have direct insights into their mental states while others’ introspections are deemed to be unreliable. They believe that they understand the underlying reasons associated with their choices. These beliefs can cause biases in the decision-making process.

Impression management, also known as self-perception theory, is a process through which an individual attempts to influence the existing perception about a person, event or object by adjusting the information through social interaction. People with these behaviors are able to control other people’s perceptions through consistent face-to-face communication and in time, expand it through computer-mediated communication. These behaviors can interfere with the decision-making process.

Mental accounting is the tendency to add subjective value to money in a way that violates basic economic principles. The way we spend our money depends on how we earn money and is often subjected to different rules. These influences can greatly affect our decision-making.

How To Overcome Cognitive Bias

A 2019 study 14 suggests that cognitive training can help minimize cognitive bias in our thinking process. There are several ways on how to overcome biases while making decisions. They are:

It is essential to be aware of all the types of biases in order to recognize which pattern you resort to. This will help you to better understand which thoughts are influencing your decision-making process. Our judgments often become inaccurate because our brain relies on cognitive biases over pre-existing evidence.

2. Surround yourself with different people

The best way to overcome cognitive biases is to surround yourself with people who are different from you. It is also important that they have different opinions than you do. This is an excellent way to challenge your thoughts and arrive at a decision based on insights, facts, data, and information.

If you are worried about biases influencing your decisions, set aside some time to reflect before making big decisions. You may also discuss them with people you trust to get new ideas.

Cognitive bias often leads to inaccurate conclusions because there are flaws in the way a person thinks. The incorrect conclusions are because they cause an individual to focus on one particular information while ignoring other important ones. It is quite unrealistic to think that it is possible to avoid biases since most cognitive biases govern a person’s daily decisions. However, it is possible to improve them by being conscious and spot the situations we are most vulnerable to. Learning more about how biases work can help to actively participate in making effective decisions without any interference.

Cognitive Bias At A Glance