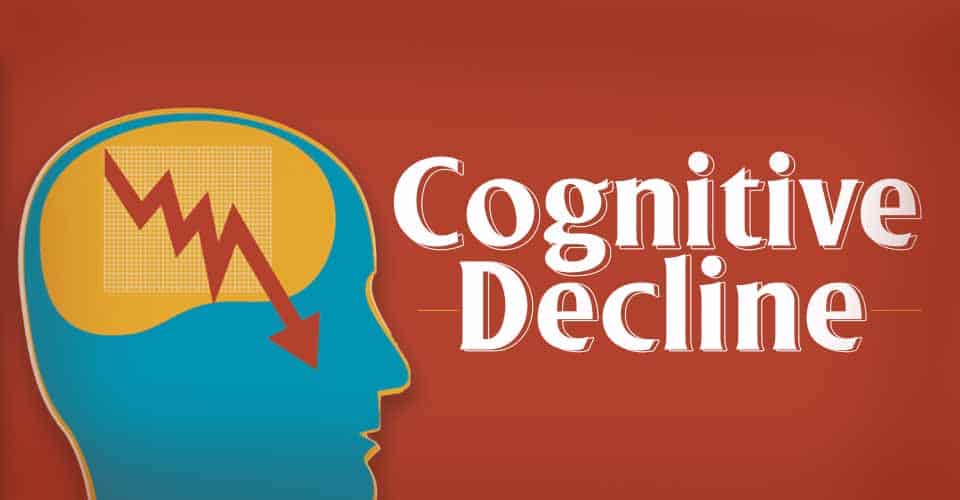 Cognitive decline is characterized by issues with memory, language, thinking, or judgment. It is a gradual process and can become more permanent with time.

What Is Cognitive Decline?

Cognitive decline is a condition characterized by a decline in cognitive functions related to thinking, memory, language and judgment. Cognitive skills play a major role in the daily functioning of an individual’s life. However, mild cognitive changes are a normal part of the aging process. With age, it is common to find issues with memory. One 2013 study 1 suggested that almost 15-20% of people aged 65 or older have mild cognitive impairment. Some cognitive abilities such as vocabulary are more resilient than others. Cognitive abilities such as conceptual reasoning, memory, and processing speed may decline gradually with time.

The primary symptom of this condition is the loss of cognitive abilities that interferes with the daily functioning of the individual. The individual may also experience emotional imbalance and confusion. In some circumstances, cognitive decline may even develop into dementia or Alzheimer’s disease. Hence, the patient needs to get treatment as soon as possible to avoid further cognitive decline. Engaging in healthy lifestyle habits can go a long way in improving cognitive abilities. Healthy older people who engage in physical activities three times a week can enhance their cognitive functions. Studies have also emphasized the role of music therapy 2 , especially listening to Buddhist hymns 3 , in the improvement of cognitive competencies. This is because music may recall past memories and activate the patient’s brain more, thus improving cognitive function.

Cognitive Decline At A Glance

Some of the signs of this condition are as follows:

Cognitive Domains And Its Decline With Age

There are several cognitive abilities that tend to decline as an individual grows older. The different cognitive domains that are impacted by age are as follows:

Processing speed is the speed at which a person can perform cognitive activities as well as the speed of motor responses. A 2010 study 4 pointed out that this cognitive ability begins to decline in the third decade of life and continues to advance throughout the lifespan. Older adults were found to report this cognitive change. This gradual decline can negatively impact the individual’s performance on many neuropsychological tests designed to measure cognition.

Attention is a person’s ability to focus and concentrate on a particular task. This can be divided into two categories:

The ability to focus on a specific task while ignoring irrelevant information such as engaging in a conversation in a noisy environment.

The ability to focus on multiple tasks at the same time such as talking on the phone while preparing a meal.

Cognitive decline interferes with the attention levels of the individual. A study 5 also found that older adults perform worse than younger adults on tasks involving working memory, which is the ability to momentarily hold information while simultaneously manipulating it.

Memory changes are one of the most common complaints in older adults. Age-related memory changes may be related to slowed processing speed 6 , reduced ability to ignore irrelevant information 7 , and decreased use of strategies to improve learning and memory 8 . Semantic memory involves a fund of information, language usage, and practical knowledge. Episodic memory involves memory for personally experienced events that occur at a specific place and time. The decline of semantic and episodic memory occurs with normal aging. A 2005 study 9 pointed out that episodic memory shows lifelong decline while semantic memory shows a late-life decline. Another 2003 study also suggested that decline occurs in memory retrieval, which refers to the ability to access newly learned information.

Language ability remains intact with aging. A 2009 study 10 found that vocabulary remains stable and even improves over time. A 2012 study 11 also pointed out that verbal fluency shows a decline with aging.

The exact causes of this condition cannot be determined. However, it is often found to arise from more than one cause. Some of the causes include:

Sometimes certain medications may interfere with the inner workings of the brain. Some of them may include sedatives, tranquilizers, or anticholinergic medications. A 2016 study 12 that elderly people are more likely to develop cognitive impairments associated with medication use than young people.

Metabolic imbalances may also be a contributing factor to cognitive decline. This refers to the abnormalities present in one’s blood chemistry. This can include:

Low levels of vitamin B12, vitamin D, folate, other vitamins, or other nutrients can also interfere with brain function. An interventional study 13 that included 80-year-old subjects from the memory clinic, found that those who received oral vitamin D3 supplementation experienced improved cognition and executive functioning abilities over a 16-month follow-up period.

Several psychiatric conditions can cause problems with memory, concentration, and thinking. These conditions may also cause paranoia and other forms of psychosis. Some of these conditions that may cause cognitive decline can include:

A 2010 study 14 showed that psychiatric morbidity, in particular depression, is significantly associated with cognitive decline.

Hormonal imbalances such as thyroid hormones, estrogen, or other sex hormones may lead to developing this condition. A 2015 research study 15 pointed out that hormonal fluctuations are one of the leading factors for cognitive decline. This study also found that chronically elevated levels of the stress hormone, cortisol have neurotoxic effects on the aging brain with negative impacts on cognition and socioemotional functioning. In addition to this, the sex hormones, estrogen, and testosterone appear to have neuroprotective effects in cognitive aging.

Delirium is a condition characterized by mental confusion and emotional disruption due to abrupt changes in the brain. This condition is common among older adults who are hospitalized and can be a contributing factor for cognitive decline. A 2018 study 16 pointed out that delirium is greatly associated with accelerated cognitive decline.

Acute substance abuse, withdrawal, or overuse of substances such as alcohol, drugs can significantly impact the function of the brain. A 2010 study 17 pointed out that cognitive deficits associated with withdrawal are temporary and can be found during the early periods of abstinence. However, long-term substance use can lead to lasting cognitive decline.

Aging is accompanied by stereotypical structural and neurophysiological changes in the brain and variable degrees of cognitive decline. Vascular damage in the brain due to head injury can cause temporary or permanent cognitive impairment. Vascular damage refers to the damage caused in the blood vessels of the brain. Certain infections can also interfere with the intricate working of the brain and impact the brain cells directly. However, it is not a common cause for developing this condition.

Damage to the neurons can also occur due to neurodegenerative conditions. These conditions gradually damage and kill the neurons in the brain. It causes mild cognitive impairment and ultimately dementia. A 2017 study pointed out that molecular changes associated with neuronal aging lead to a decrease in cognitive capacity.

A 2013 study pointed out that the size of the brain decreases with age. The loss of neurons during normal aging is restricted to specific regions of the brain. Due to this, there may be a decline in the cognitive reserve of the brain that causes memory loss or a lack of language and comprehension abilities. A 2015 study pointed out that age-related changes in the structure and function of synapses in the brain and the changes in neuronal networks correlate with cognitive changes and aging.

There may be several risk factors that can be a contributing factor to the development of this condition. They are:

Most people with memory issues are reluctant to mention such concerns due to their fear of getting diagnosed with dementia or Alzheimer’s. However, it is crucial to address such concerns to be prepared for what may come.

Physical examination includes several neurological tests that indicate the accurate performance capacity of the brain and the nervous system. The doctor may also order an MRI or CT scan to check for any underlying conditions. These tests can also help to detect other conditions that may be triggering this condition, such as Parkinson’s disease, strokes, or tumors. The neurological exam is used to check the patient’s reflexes, balance, and movements. Certain blood tests may also be conducted to rule out any physical issues that cause memory or cognitive decline such as deficiency of Vitamin B 12 or hormonal imbalances. After understanding the cognitive health of the patient, the doctor will devise a treatment plan.

The treatment depends on the degree of cognitive impairment and the patient’s specific needs. There is a range of therapies that can help replenish an individual’s cognitive reserve and retrain their cognitive abilities in order to slow down the impairment. Some of these options include:

Neurofeedback is a technique used to harness the brain’s capacity to change in order to attend to the weaknesses in brain function. It trains the brain to function in a better way and to reach its optimal performance state. It is recommended to:

This will promote neurological health and make the neurofeedback training to be more effective. Research suggests that the cognitive changes you experience during neurofeedback last for 3 to 6 months.

Cogmed is a computerized training program that helps to improve your working memory. People with mental health problems often experience poor working memory. There are several reasons why this training method is used such as a concussion, or age-related cognitive decline. This training method will help you to improve your memory capacity, learn things easily, pay more attention, and resist distractions. Improving your working memory can help to enhance your overall cognitive function.

There are no FDA-approved medications specifically designed to cure this condition. Some medications such as cholinesterase inhibitors, an approved drug for Alzheimer’s disease can be prescribed. However, it is not recommended as a routine treatment for this cognitive decline.

There are several methods that the individual can adopt to promote neurological health. A 2016 study suggests that a combination of a healthy diet, physical activity, and mental and social activity can promote brain health. This will slow down the process of cognitive decline. Some of these methods include:

A 2014 study that some environmental factors may influence the development of this condition. Hence, certain preventive measures must be taken to ensure cognitive health. They are as follows:

The recovery process can be challenging. Treating associated conditions, such as depression or high blood pressure can go a long way in improving memory and overall mental function. Maintaining a healthy diet and sleep pattern can also enhance your brain health. It is essential to stick to the treatment plan to avoid further cognitive decline.