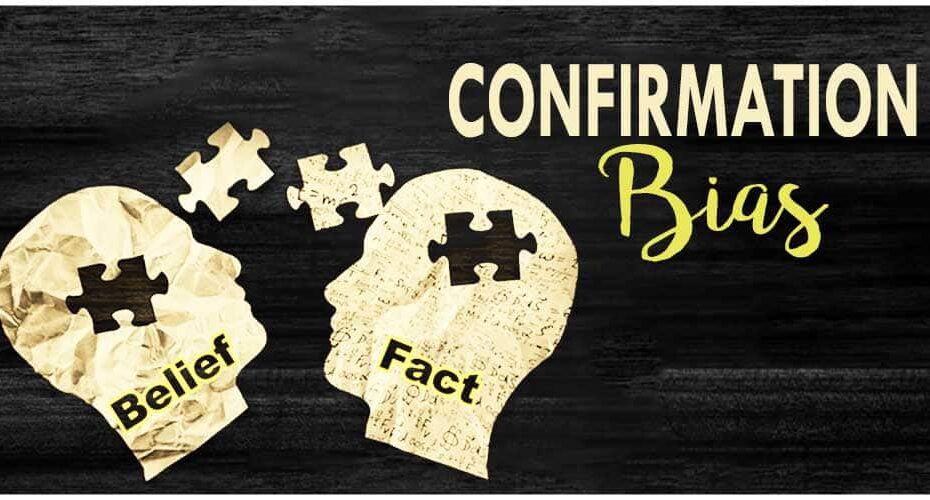 Confirmation Bias is a type of cognitive bias characterized by a tendency to advocate, search, interpret, or recall information that confirms their existing beliefs.

What Is Confirmation Bias?

Confirmation Bias is the tendency to advocate or believe information that favors their pre-existing beliefs and ideas. Confirmation bias leads people to unconsciously select the information that validates their beliefs while ignoring information that contradicts them. People also tend to look for evidence that supports their claim. This biasing effect is mostly witnessed in the case of desired outcomes, emotionally charged issues, and deeply rooted beliefs. A 2014 study 1 explains this bias as “the tendency to acquire or process new information in a way that confirms one’s preconceptions and avoids contradiction with prior beliefs.” Different variations of the bias have been observed in a number of fields such as social psychology, cognitive psychology, economics, and politics. The researchers have observed that this type of bias is also present in scientific practices although scientific methods are based on the importance of avoiding such biases.

According to a recent research 2 , it has been observed that bias is associated with an inability to “use the strength of others’ disconfirming opinions to alter confidence in judgments, but adequate use when opinions are confirmatory.” It is also linked with decreased neural sensitivity “in the posterior medial prefrontal cortex” towards the opinions of others particularly when such beliefs are disconfirming. The researchers found that the neural manifestation 3 of the strength of information can be changed by existing opinions which can make it increasingly difficult for someone to change their judgment or opinions during disagreements or confrontations. Studies 4 have also found that this type of cognitive bias also influences the “prevalence and maintenance” of different false beliefs and misconceptions.

Experts found numerous explanations associated with confirmation bias. A series of psychological experiments 5 in the 1960s confirmed that people largely favor information that confirms their beliefs. Explanations for this bias include wishful thinking and the limited human capacity to process information. Another explanation of people resorting to confirmation bias is because they are more prone to confirming they are right, rather than investigating in a neutral and scientific way. This bias cannot be eradicated entirely, but it is possible to manage it with education and training in critical thinking skills.

People are often found to be overconfident with their beliefs and tend to go to extreme measures in an attempt to confirm them. In the case of social media, this bias is found to be amplified by the use of filter bubbles or algorithmic editing where individuals only display the information they are likely to agree with while ignoring opposing viewpoints. Confirmation bias is often found to interfere with scientific research based on inductive reasoning. It is also found in cases of a police investigation where the investigator found the suspect early by seeking evidence that confirms it while ignoring contradicting information. A medical practitioner may entirely focus on a particular disorder early in a diagnostic session and then only seek confirming evidence to support their diagnosis. A report 6 concluded that confirmation bias has been found to operate in diverse fields such as fingerprint analysis, forensic anthropology, and assessment of DNA mixtures. Experts 7 , however, believe that the prevalence of biases varies according to age and context.

Confirmation bias can be subdivided into three types based on information, interpretation, and memory.

In the case of a biased search for information, people tend to rely on information available to them in order to arrive at a conclusion. Experiments 8 found that people tend to test hypotheses in a one-sided way and search for evidence consistent with their current beliefs. Studies suggest that rather than searching through all the relevant evidence, people tend to phrase questions in order to receive an answer that supports their beliefs. People look for consequences that would confirm their hypothesis, rather than taking other factors into consideration that don’t confirm their beliefs.

Even a small change in a question’s wording can affect how people search through available information. A child’s custody case 9 demonstrated the effects of biased search for information. Participants read that Parent A was moderately suitable to be the guardian of the child in multiple ways. Parent B had a combination of positive and negative qualities: a close relationship with the child but a job that would take them away for a long duration. When asked “which parents should have the custody of the child?”, the majority were in favor of Parent B due to their tendency to look for positive attributes. However, when asked “which parent should be denied custody?”, the majority replied that parent B should be denied custody since they looked for negative attributes in this case.

Confirmation bias is not necessarily limited to the collection of evidence. It can occur even when individuals have the same information, but the interpretation of the information can be biased. A team at Stanford University conducted an experiment that involved participants who felt strongly about capital punishments where half of them were in favor, while the other half were against it. Every participant read descriptions of two studies: a comparison of US states with and without death penalty, and a comparison of murder rates in a state before and after the introduction of death penalty. The participants were asked whether their opinions changed after reading a quick description of the studies. They also read a more detailed account of each study procedure and had to rate whether each study was well conducted and convincing. In reality, the studies were fictional. One group concluded that one kind of study supported the deterrent effect while the others undermined it.

The participants reported a shift in their attitudes in the direction of the first study. Once they read the more detailed description of the two studies, they all resorted to their original beliefs regardless of the evidence they were provided. They pointed to details that supported their viewpoints and disregarded anything contradicting. Participants were found to vouch for more for the studies that supported their pre-existing views than the ones that contradicted them.

People tend to remember evidence that supports their expectations even if they gather and interpret evidence in a neutral manner. This effect is also known as “selective recall 10 ”, “confirmatory memory”, or “access biased memory”. Prevalent psychological theories differ in their predictions of biased memory. Schema theory predicts that information matching prior expectation is more easily restored and recalled than information that doesn’t match. It is also seen that emotional memories are reconstructed by current emotional states. A 2010 study 11 found that individuals appear to utilize their current emotional states to analyze how they must have felt when experiencing past events.

In one experimental study 12 , participants read a profile that described a woman to possess a mix of introverted and extroverted behaviors. One group was told that this was to assess for a job as a librarian while the other group was told that it was a job for real estate sales. It was found that there was a significant difference between what the two groups recalled from their memory. In this case, the “librarian” group recalled more examples of introversion while the “sales” group recalled more examples of extroversion. The study demonstrated the effects of selective memory manipulating the desirability of the personality types.

C. James Godwin, in his book Research in Psychology: Methods and Design gave a classic example of confirmation bias as it applies to extrasensory perception. In his book, he mentioned that “persons believing in extrasensory perception will keep close track of instances when they were thinking about mom, and then the phone rang and it was her! Yet they ignore the far more numerous times when a)they were thinking about mom and she didn’t call and b) they weren’t thinking about mom and she did call.” In case of this bias, people also often fail to realize that if they talk to their mother every two weeks, their frequency of “thinking about mom” will increase near the end of the two-week interval.

In the book, Social Psychology, Catherine A Sanderson 13 pointed out that confirmation bias also contributes to form and reconfirm the stereotypes we have about certain people. We tend to ignore information that disregards our expectations. It is seen that we are more likely to remember and repeat stereotypical consistent information and to ignore stereotype inconsistent information. This explains how stereotypes are maintained even when evidence suggests otherwise.

This bias is not only found in personal or stereotypical beliefs it can also affect professional endeavors as well as pointed out by Peter O. Gray in his book, Psychology 14 . He explained how confirmation bias can affect a doctor’s diagnosis. Confirmation bias, coupled with availability bias can result in misdiagnosis in a doctor’s office. A doctor may jump to a particular hypothesis regarding a patient which enables them to ask questions and seek evidence that supports their diagnosis. They may even overlook evidence that disconfirms their hypothesis. He suggested that medical training should include a course in inductive reasoning that would make new doctors become aware of such biases.

Cognitive psychologist Peter Cathcart Wason conducted numerous experiments known as Wason’s rule discovery task in the 1960s. It was demonstrated that people resorted to information that confirms their pre-existing beliefs. Due to this, it can prevent people from seeing things differently. It can also influence people to make poor decisions. For instance, during an election season, people tend to seek positive information that demonstrates their favored candidates in a good light. They also look for information that displays the opposing candidate in a negative light. People tend to miss out on important information when they don’t seek objective facts and interpret information in a way that only supports their beliefs and recalling information that upholds their beliefs. These facts may otherwise influence their decision on which candidate to support.

The Cure To Confirmation Bias

In reality, it is impossible to eradicate confirmation bias. It is present in everyone even when we claim and believe that we are open-minded. In such cases, it is essential to pay more attention to the facts rather than the pre-existing beliefs that lead us to poor conclusions. It may be quite challenging to discard your natural tendency of making decisions based on biases. There are several ways to stop this bias from affecting your decisions. Some of them are:

It is possible to make better decisions without the influence of biases if one is being mindful of their thoughts. We can make better decisions by working towards recognizing the bias and taking actions accordingly by participating in opposing viewpoints and listening to what others are saying and why.

Confirmation Bias At A Glance