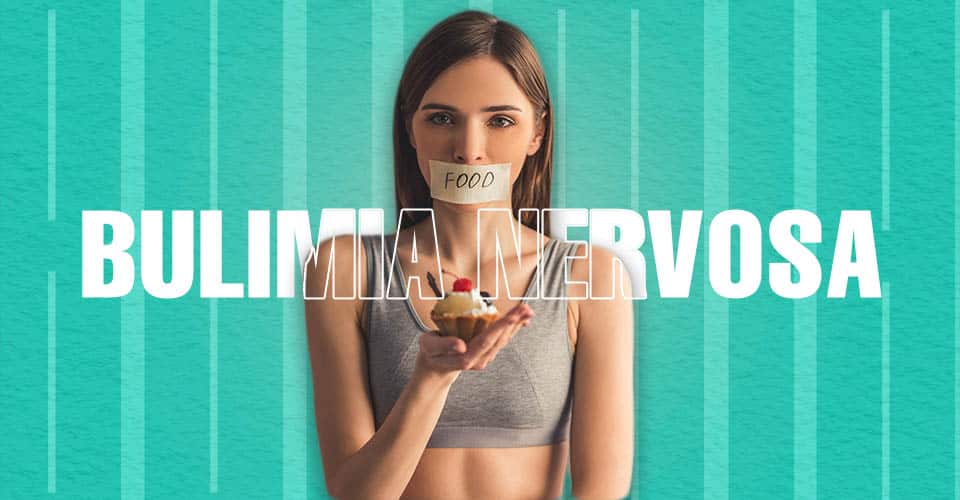 Bulimia nervosa, or simply bulimia, is an eating disorder that involves eating excessive food in one sitting, followed by purging or steps to lose weight in unhealthy ways. Purging typically involves vomiting, fasting or exercising.

What Is Bulimia Nervosa?

It is a psychological condition involving repeated episodes of abnormal binge eating and purging in a short period of time. Bulimia is a severe eating disorder where the sufferer is not aware of their unhealthy eating habits. They are often highly concerned about their body weight and shape. Hence, they may engage in purging behaviors to get rid of the excessive food consumed. This can involve –

A person with this condition has no sense of control while binge eating or purging. Sufferers are often afraid of the calories they consume and how it might affect their body leading to weight gain. Mind Help explains that “people with bulimia tend to be secretive. During the bingeing process, the sufferer may feel helpless or out of control but may feel relieved after purging. With their stomachs emptied, stress and other difficult emotions may reduce.” Some sufferers may calm down after a single binge-purge episode, while others may experience multiple episodes before they can stop.

Bulimia Nervosa was first described by British Psychiatrist Gerald Russell in 1979. It tends to surface in late childhood and early adulthood and onset is often found during adolescence between 13 years to 20 years of age. Bulimia is commonly found in people who have close relatives suffering from it. The disorder may also be triggered by abuse or trauma or other major life events and it may significantly affect the ability of the person to function effectively in daily life. It may also affect important physiological functions leading to fatigue and depression.

It should be noted that bulimia nervosa is different from other binge eating disorders, as sufferers of this mental illness immediately purge the food due to guilt and shame. Bulimic people usually have an average weight which can make it harder to recognise the condition in some people. However, some sufferers can be slightly below or above average weight for their respective height.

According to a Harvard Health report, 1-3 women out of 100 are affected by this condition at least once in their lives. For men, the diagnosis rate is only 10% of the rate in women. A 2012 study 1 suggests “about 1% of young women have bulimia at a given point in time and about 2 percent to 3 percent of women have the condition at some point in their lives”. According to a recent psychiatry report 2 on the incidence, prevalence, and mortality rates for eating disorders, there is also a higher risk of suicide and self-harm associated with this disorder.

Most bulimic people are usually preoccupied with their body shape and weight. They may have negative or distorted body image and tend to severely judge themselves for their appearance and intensely self-criticize for self-perceived flaws. As the eating disorder is associated with poor self-image and low self-esteem, and not limited to food, it can be challenging to overcome it. However, it is a treatable condition and “a combination of cognitive behavioural therapy and medication works best,” suggests the Harvard report. Effective treatment and healthier eating patterns can help the sufferer recover from it.

Bulimia usually involves uncontrollable eating which may stop if the individual is interrupted or if their stomach starts to hurt. This is followed by self-induced compensatory behavior. The cycle may be repeated several times a week or in severe cases, several times a day. People suffering from Bulimia Nervosa can experience the following:

Apart from these, there are several other physical and behavioural symptoms of this mental health condition:

Bulimia Nervosa can have a physical impact on an individual due to consistent binge eating or purging. These can be:

A person suffering from this disorder also tends to behave in a certain way that can become a symptom. They are:

What Are The Causes Of Bulimia Nervosa?

The cause for the development of this disorder is not yet known. However, it has been observed that a combination of genetic, biological and environmental factors, along with personality traits, thought and behaviour patterns and emotions may contribute to its development and onset.

Here are some of the most common contributing factors believed to influence the development of Bulimia:

Studies suggest that there is evidence of genetic predispositions contributing to the onset and it may run in families. People with close relatives having an eating disorder are more likely to inherit a risk for the condition. Being overweight when the individual was a child or a teen may also increase the risk. A 2010 study 3 suggested, “the percentage risk is estimated to be due to genetics is between 30% and 80%”.

People suffering from this disorder can have a negative impact on themselves. There are psychological factors associated with this disorder as well, such as Depression and Generalized Anxiety Disorder (GAD). People with depression are highly likely to engage in binge eating as a coping mechanism 4, which can lead to feelings of guilt and shame. This in turn can lead to purging of the food eaten.

People who follow a diet routine are more susceptible to develop an eating disorder. Many people restrict calories between binges and this acts as a triggering factor to binge eat and then purge.

A contributing factor of bulimia is media portrayals of ideal body shape. The British Journal of Psychiatry conducted a survey of 15 to 18-year-old high school girls, who had prolonged exposure to television. The survey reported an incidence of purging rose from 0% in 1995 to 11.3% in 1998. A considerable proportion of correlation is found between sexual abuse and the development of bulimia nervosa.

Increasing amounts of evidence suggest that most eating disorders often begin due to dissatisfaction with their own body. Excessive worry about body shape and size can often lead to the onset of Bulimia. One 2017 study 5 states “Disturbances of body image perception are considered to be one of the central aspects of anorexia nervosa and bulimia nervosa.” Sufferers usually have a poor sense of self, low self-esteem and an intense fear of being overweight 6.

A history of trauma in patients is also a prominent contributing factor in this disorder. Studies 7 show that childhood or early traumatic experiences or adverse events can be “associated with subsequent eating disturbance.” One 2018 study 8 found that “a relationship between trauma and eating disorders in adolescence is well established.” Traumatic experiences like childhood sexual abuse, bullying, serious injury or loss of a loved one can have a serious impact leading to certain eating disorders like Bulimia.

Apart from these, there are certain risk factors that can influence the development of this condition, such as boredom, stress, alcohol, substance abuse, frequent dieting and even being a girl/woman.

What Are The Complications?

There are several complications associated with Bulimia Nervosa that may require serious medical attention. They include:

How To Diagnose Bulimia Nervosa?

The doctor can ask the patient several questions about their eating habits, weight gain, and whether they have any physical symptoms. The doctor also does some physical tests to diagnose the disorder, such as:

The DSM-5 has laid down the following diagnostic criteria for Bulimia Nervosa:

The intensity of the condition can be decided by analyzing how much the patient engages in bingeing and purging behaviours on average. According to the DSM-5, it can be categories mild to extreme in the following way:

When an individual develops Bulimia, the doctor usually derives a treatment plan that combines both psychotherapy and medication. Antidepressants are found to be most effective in these cases. Treatment usually involves a team taking care of the patient that includes the doctor, the family, a mental health professional, and an experienced dietician. Here are some of the methods that are used to treat people suffering from this disorder.

According to the report from Harvard Health Publishing, “CBT is the most effective type of psychotherapy for adults with bulimia nervosa.” CBT helps the patient to identify the thought patterns and behaviours that contribute to binge eating. It helps them to normalize their eating habits and identify negative behaviours and beliefs and replace them with positive behaviours and thought patterns. One study 9 found that CBT shows a substantially more rapid treatment effect “with 62% of posttreatment improvement evident by Week 6,” than Interpersonal Psychotherapy (IPT).

The goal of Interpersonal Psychotherapy 10 is to improve the quality of a patient’s interpersonal relationship and social functioning in an attempt to reduce their distress. It was originally developed to treat major depressive disorders. However, some studies have proven this method effective in patients suffering from this disorder.

This enables parents to intervene with the teenager’s or child’s unhealthy eating habits and help them to regain control over their binge eating and purging behaviours. The involvement of the family can help with the development of a cordial relationship with the teen since teens may develop this disorder due to foul relationships in the family. According to a 2017 study 11, “preliminary evidence suggests that FBT may be efficacious in the treatment of adolescents with bulimia nervosa.”

Some researchers 12 also found that hypnotherapy has proven effective in treating patients suffering from this disorder. This is due to the interaction between the characteristics of people with eating disorders and the phenomena of hypnosis.

Studies 13 suggest that antidepressants of the selective serotonin reuptake inhibitors (SSRI) class are found to be effective for patients suffering from this disorder. This includes fluoxetine, an antidepressant that is FDA approved. Topiramate may also be useful but has side effects. In fact, there is research 14 that suggests “antidepressants have proven more effective, as compared to placebo”. According to the National Institute of Biotechnology Information 15 (NCBI), “combining medication with counselling can improve outcomes in some circumstances.”

There is no medically proven way to prevent this disorder. However, there are several measures that one can take in order to lead a healthy life.

With the right treatment and medication, people suffering from Bulimia Nervosa may improve. However, it has been found that some people even relapse after improving. Understanding the causes is essential to develop a proper treatment plan. This will enable the doctor to understand the underlying causes that need to be addressed.

It is of utmost importance, to be honest with the doctor when discussing symptoms so that a proper diagnosis can be ascertained in order to treat the patient successfully. So if you are experiencing any symptoms, make sure to consult a doctor immediately so that you can live a healthier and happier life.

Bulimia Nervosa At A Glance