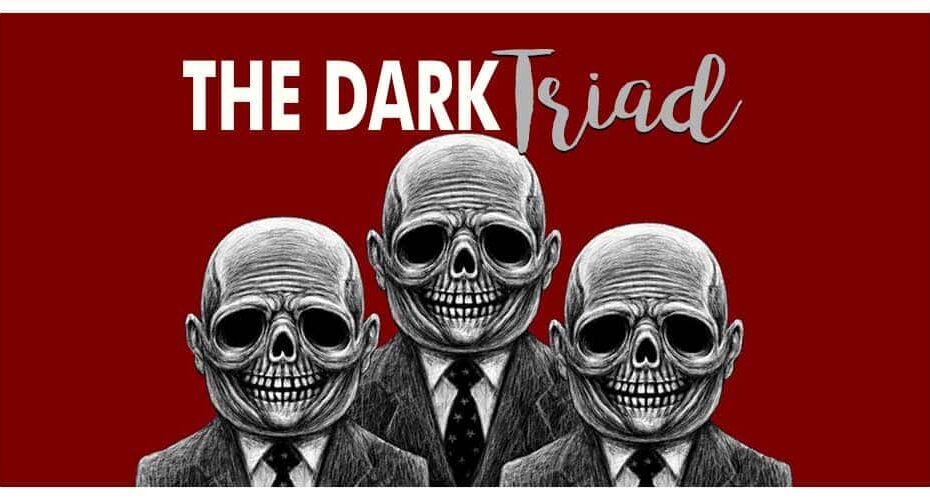 The dark triad consists of the personality traits of narcissism, Machiavellianism, and psychopathy.

What Is The Dark Triad?

It refers to a psychological concept that involves certain malicious and toxic personality traits associated with Machiavellianism, subclinical psychopathy and subclinical narcissism. In personality psychology, a person who possesses a combination of these personality traits may have some malevolent or “evil” qualities. According to a 2002 study 1 , these psychological constructs, although not equivalent, tend to be interrelated. The study found that “disagreeableness” was the only common Big Five Personality Trait among these three personality constructs. However, people with Machiavellianism and psychopathy tend to have low conscientiousness, while narcissists are low in neuroticism. The study concludes that the Dark Triad of personalities “are overlapping but distinct constructs.”

According to psychology, these are distinct but related psychology traits can be explained as follows:

It is usually characterized by grandiosity, pride, egotism, and lack of empathy. It comes from the Greek myth of Narcissus who was a hunter who fell in love with his own reflection in a pool of water and ultimately drowned. Narcissistic people can be arrogant, selfish, or hypersensitive to criticism. Narcissism “is a personality trait marked by beliefs of personal superiority and a sense of entitlement to special treatment,” explains a recent 2020 study 5 .

It is characterized by manipulation and exploitation of others, a lack of morality, callousness, and extremely self-centeredness. This term derives from the reference to the infamous Niccolo Machiavelli, a philosopher most well known for his work “The Prince”. This book espoused his views that strong rulers should be harsh with their subjects and glory and survival justified any means necessary. “Machiavellianism” became a popular term to describe the art of deception. A “Mach” is a person who deceives others with tricks and lies to achieve their goals. According to a 2017 study 6 , “Machiavellianism is characterized by a manipulative interpersonal style, willingness to exploit others, and a preference for emotionally detached relationships.”

Some individuals have certain personality traits that may be difficult to deal with. They may be dominating, arrogant, or extremely self-centered. With a little help, it may be possible to develop strengths and neutralize these behaviors. However, some people have certain traits that can be seriously damaging. If someone tends to display a combination of narcissism, Machiavellianism, and psychopathic traits, it may be a sign of the dark triad. People with these traits tend to be callous and manipulative. They are willing to do anything to get their way. They feel no shame when they are self-promoting.

These people are often found to get involved in impulsive acts and may engage in dangerous behavior including criminal activity. These are done without any regard to how they are affecting others. Even though researchers 8 found distinct traits of narcissism, Machiavellianism, and psychopathy, they also found overlapping characteristics that suggest an underlying personality construct. Psychopathy is believed to be the “darkest” of the dark triad since psychopaths are more harmful to individuals and society than narcissists or “High Machs”.

The Dark Triad And Comorbidity

The dark triad personalities may also have comorbid conditions which may also act as a triggering factor for their respective behaviors. A 2019 study 9 found that comorbidities and the respective personality disorders are also well documented in community samples and clinical groups 10 . A 2008 study 11 found that Narcissistic personality disorder is found to be comorbid with alcohol and drug dependence. A 2007 study 12 found that Machiavellianism had high cocaine users and problematic or addictive internet use. A 2018 study 13 on adult parolees with substance use disorder found evidence for positive modulation of brain activation to drug cues by psychopathic traits. Studies have found that people with such traits also tend to suffer from addiction 9 and depression 14 .

Machiavellianism may be closely related to psychopathic behavior. However, narcissists are often more defensive and fragile. This is because their arrogance arises from their facade of deeper emotions of inadequacy. Psychopaths are found to possess the lowest levels of neuroticism or negative emotions which makes them more dangerous. All three personalities appear to excel in deception. A study 15 on cheating revealed that all three personalities resort to lying when the risk of getting caught is low. When the risk of getting caught is high psychopaths and Machiavellians cheat. A 2016 study 16 found dark triad traits in relation to sleep disturbances, anxiety, and intolerance of uncertainty in young adults.

Recent comparative research attempted to analyze the common traits of the dark triad. Some of the traits include:

How Can You Recognize The Dark Triad?

The dark triad is an individual who possesses manipulative and exploitative traits. However, these traits are not represented by the Big 5 personality traits. The Big 5 is a five factor model used to measure the core personality traits of an individual. To identify the dark triad traits in a clinical setting, researchers usually use individual scales measuring narcissism, Machiavellianism, and psychopathy separately or in a 12 item scale, known as the “Dirty Dozen”. This scale is designed to measure all three traits at once.

Although there are distinct physical and behavioral characteristics that are associated with these individuals, they are also found to excel at hiding their true nature, especially in the beginning. For instance, some evidence suggests that narcissists often appear charming at the first meeting. This may be due to their desire to hold high self-esteem of oneself. Some traits are often found to be manifested in physical appearances. Some people with this trait are often found to dress attractive, be physically attractive, wear makeup, or dress provocatively. A 2018 study 17 found that grandiose narcissists also possessed distinctive and well-groomed eyebrows.

In order to understand the lack of empathy in dark triad personalities, research 18 was conducted to examine affective empathy. Affective empathy is the ability to have an appropriate emotional response to other’s emotions or cognitive empathy. It was found that all three personalities lacked affective empathy but had unimpaired cognitive empathy. The research also found that all three personality types displayed “positive looking” at sad faces and “negative looking” at happy faces. Narcissists and psychopaths also enjoyed seeing angry faces. Psychopaths particularly enjoyed seeing fearful faces. The mere fact that these individuals are insensitive to other people’s feelings while possessing the ability to assess emotions is the reason that allows them to manipulate people strategically while ignoring the harm they tend to inflict on others.

Causes Of the Dark Triad

The exact cause of developing this condition is unknown. It is important to keep in mind that it can be difficult to detect a person with this personality without a formal evaluation. But in case the individual demonstrates repeated lies, a lack of empathy, or tends to bully others in order to achieve their goals may be a classic sign of the Dark Triad. Experts believe that this condition may develop due to a combination of biological, environmental, and evolutionary factors.

All three traits are found to have a genetic component influencing their personality. A 2013 study 19 also found that the relationship between the dark triad and the five factor model, are strongly driven by individual differences in genes. Psychopathy and narcissism have relatively large heritable components. However, Machiavellianism is found to be moderately influenced by genetics according to studies 20 .

It is important to seek medical attention if you suspect having this condition. Medications may be prescribed for individuals with underlying conditions such as depression or anxiety. Psychotherapy can be helpful in some cases. Some of the other options for treating this condition are:

Dealing With The Dark Triad

Covering up for bad behavior from such individuals can be dangerous for loved ones, family members and friends. So, in case you have been threatened by someone with violence, it is important to not wait for it to happen or trust that it won’t be repeated. Seek help from professionals and inform a trusted loved one immediately.

Drak Triad At A Glance

How To Improve Brain Health