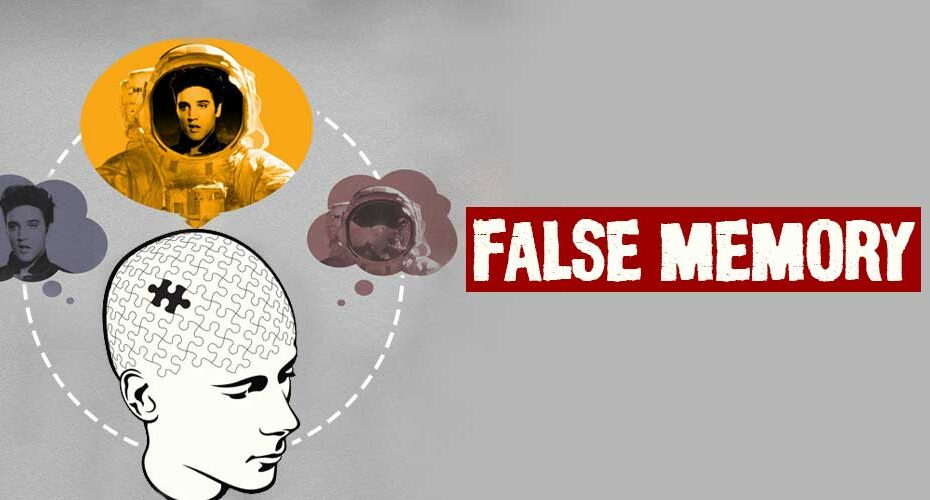 According to psychology, false memory refers to inaccurate, distorted and altered recollections of a past event. These are strongly held, detailed yet malformed recollections that the person may refuse to change despite contradictory evidence.

What Is False Memory?

Memories tend to change and get distorted with time. Sometimes the incorporation of new information can alter the original memory. False memories occur when an individual remembers certain details about a past experience or event that actually never happened in reality. They may even remember the events very differently than what actually occurred. At times, a person may even recall certain instances that may not have even occurred at all. Not only can these memories be false, these can be completely imaginary and fabricated, usually unintentionally. For some individuals, certain aspects of the reality may get altered due to cognitive and memory distortions and other information. “Decades of research shows that people can come to remember events that never happened. In fact, as scientists who conduct this kind of research, we know it is not all that difficult to ‘implant’ false memories,” reveals a 2017 study 1 .

A false memory is primarily an autobiographical or semantic recollection which never happened in reality. These are often obtained by mixing real memories with the substance of other people’s suggestions. Since memories are essentially an active reconstructive operation, false memories are believed to be common. According to a study published in 2016 2 , only 15% of individuals, or even fewer, are prone to false childhood memories. False memories emerge even after a few simple, limited interactions, and they become richer, more convincing, and more likely with each subsequent question.

According to a 2011 study 3 , false memory may be associated with the misinformation effect. It states that “The misinformation effect is a term used in the cognitive psychological literature to describe both experimental and real-world instances in which misleading information is incorporated into an account of an historical event.” It may be challenging to identify the specific source of misinformation most of the times and the person may be influenced by different sources of information to form a false memory. By gaining a clear understanding of this psychological phenomenon, we can gain a better insight into our mind and memory mechanisms.

A 2014 study 4 explains “Memory is susceptible to illusions in the form of false memories.” This psychological phenomenon provokes us to question our self-perceived ability to understand, decipher and store the facts and remember it accurately. It is also associated with our nonconscious motivations as well. The occurrence can be influenced by a number of factors such as source misattribution, interference or inclusion of misinformation, activation of related information and suggestibility. Research 5 also shows that false memories tend to increase in vulnerability with age due to various cognitive changes.

According to a 2006 study 7 , “False memories sometimes contain specific details, such as location or colour, about events that never occurred.” Usually, false memories tend to occur in every human mind. However, not all false memories are damaging or harmful as long as the sufferer can manage to differentiate between the real events and the imagined or fabricated events. Here some of the most common signs and symptoms of false memory:

Our minds are complicated. When we sleep, events are transferred from our brain’s immediate memory to permanent storage. However, as the shift isn’t absolute, over-endorsement can lead to the formation of false memories. Here are some of the factors that can lead to the development of a false memory:

Trauma can cause significant memory distortions 8 . People who have mostly experienced childhood traumas 9 are susceptible to false memories. Such events are converted differently during the experiences of everyday life. Our memories are priceless, but they contain gaps and errors. As a result, stressful events are remembered and narrated differently than routine events. According to a 2017 study 10 , “Memory aberrations are notable characteristics of posttraumatic stress disorder (PTSD 11 ) and depression.” Individuals with a history of trauma are prone to incorrect memories when exposed to the details related to their experience or knowledge. Research 12 also indicates that childhood trauma and abuse can also be associated with false and repressed memories.

“False memory occurs when a vulnerable patient with a history of over-compliant or highly suggestible behavior is unwittingly coached by a respected authority figure to create, as if in memory, an experience that never actually occurred,” explains a 1996 study 13 .

Studies 14 show that enough sleep is necessary for optimizing the memory processes. Although voluntary deprivation of sleep is increasing, sleep is important for memory functioning. Multiple nights of sleep deprivation result in an increase in the formation of false memories.

According to research 15 , this psychological phenomenon can be caused “from adaptive processes typically associated with positive effects on memory.” Higher imaginative creativity and detachment of separation have been associated with the creation of false memory. The interaction effects between personality factors and cognitive abilities were considered to be significant. People with certain personality traits and cognitive abilities (e.g., low fear of negative assessment, low harm avoidance, high cooperativeness, high reward dependency in combination with low cognitive abilities) were more vulnerable to the misinformation effect. According to one 2011 study 16 , memory distortions are associated with adaptive processes like creativity, simulation of future events, memory updating etc.

Apart from the causes mentioned above, there are certain factors that can influence the development of false memory, such as:

Although human perception tends to be accurate 17 , it is far from being perfect. However, when we receive false information, the perceptual processes can become distorted leading to illusions regarding a real event. As our mind makes up it’s own story, memory gaps about the event tend to get loaded with artificial recollections.

Suggestions 18 from others can strongly influence 19 our perception, beliefs and memories. Powerful prompts by someone can lead to the formation of false memories. Most of the time suggestions can implant new and inaccurate memories that are not real. According to a 2011 study 20 , conceptual elaboration or suggested events tend to affect the formation of false memories. “Much of the scientific literature on eyewitness suggestibility and false autobiographical memory has emphasized the role of perceptual elaboration in false memory development,” adds the study.

Often false memories can be created by unintentionally mixing up details 21 and information from different past events into a single memory of a particular event, making it inaccurate and false. Although the recollections may be correct and based on real events, the time of occurrence may be incorrect. This can confuse the individual to believe that their assorted recollections of different events belongs to an imagined specific event believing it to be real. One study 22 found that source misattribution can lead to imagined events and false recollections.

Consuming incorrect and improper information about a specific event can make someone believe that reality is based in that false information. They can either merge their imagination with real memories of the actual event or even create a completely new memory that never happened. Studies 23 have found that people exposed to misleading and inaccurate information were at higher risk of reconstructing their memory of that event. This is where the misinformation effect comes in.

Our emotions can drastically alter our memories regarding a specific period of time and event. According to a recent 2020 study 24 , emotional stimuli is closely associated with false recollections. The study found that emotions “can improve retrieval monitoring accuracy and reduce false memories based on conceptual fluency (i.e., an emotional distinctiveness heuristic).” It is often difficult to remember details of an event that was emotionally charged. Although positive emotions can make an event seem more pleasing when recollected later, difficult emotions can make certain past experiences appear more challenging than it was leading to a false memory.

Research 25 shows that falsified memories are highest when influenced by “negative materials”, while it’s the lowest for events influenced by positive emotions. “Remembering negative events can stimulate high levels of false memory,” explain the researchers. It was also found that arousal levels 26 may also play a role.

Also known as pseudomemory and recovered memory, FMS is a psychological disorder associated with false memories. One 2002 study 27 describes the condition as “a serious form of psychopathology characterized by strongly believed pseudomemories of childhood sexual abuse.” The study adds that the identity and relationships of the sufferer are regulated by “objectively false” memories of a traumatic experience which they strongly believe in. A person with FMS 28 tends to falsely recollect past events in a dramatically different way. They can have detailed memories about events that never occurred in reality. Not only can it affect their mental health, it can also adversely impact their identity, personal life, relationships and career. However, the person may strongly believe their false memories even when presented with the facts. Such memories can be emotionally charged, particularly the ones related to negative experiences like childhood abuse. It should be noted that false memory syndrome is not an officially recognized mental health condition.

As per a 2001 study 29 , FMS “is caused by memories of a traumatic experience–most frequently CSA (childhood sexual abuse), which are objectively false, but in which the person strongly believes. Personality factors often play a role in the development of FMS.”

One of the simplest ways to overcome a false memory is to seek and accept proven facts and information that either verifies or debunks doubtful memories. However, as having frequent false recollections can also hint at some other cognitive issues or underlying mental illness, consulting a mental health professional can be beneficial. It is essential to attend the therapy sessions and remain in touch with the health professionals. As this is a mental health issue, the process can get longer than expected but with time and patience, one will get better. With enough determination, one can recover fully.

Most of us have experienced a false memory at least once as it is a common experience. However, when you experience pseudomemories frequently and it starts to affect your ability to function and your relationships, then seeking professional help can be important. With counselling and determination, one can gain the ability to distinguish between real memories and fabricated ones.

False Memory At A Glance