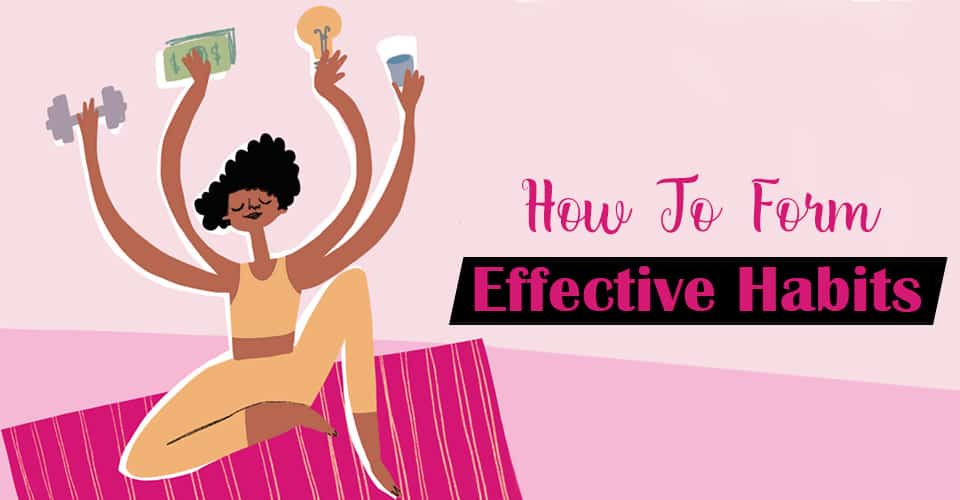 Habits refer to the learned behavior that becomes automatic and regular. The psychology behind the concept of habit formation lies in how one can create effective habits.

The term ‘habit’ describes a simple form of learned behavior or a significant change of behavior with experience. A certain context often triggers the behavior and develops a habit. When human behavior develops to an extent and becomes highly automatic, it is termed a habit. According to a 2017 research paper 1 , habit is a regular tendency hard to give up. A habit that forms through repetition or conditioning can be eliminated also when necessary. It is extremely essential in people’s lives as it affects their everyday routine, rate of success, hard work, and even the outcome of most parts of their lives. Most habits form intentionally as goal-directed behaviors. Habit formation is considered to be a specific process by which human behaviors become automatic and repetitive.

Research 2 has suggested that the process of forming a habit which is often termed as ‘The Habit Loop’ can be classified into three simple steps:

A cue triggers the brain to initiate behavior and acts as a bit of information to predict the reward. It indicates the brain about the location of a reward. It can be a location, a specific smell, a particular time of the day, and an emotional state of a person, or any preceding action.

A routine refers to the action part of a habit that one takes immediately following the cue. It is the actual behavior or action that one wants to change or enforce.

The routine delivers a reward but it doesn’t need to be a tangible compensation for completing the routine. The reward is considered to be the goal of every habit.

The impact of a habit in people’s lives can be healthy, unhealthy, even neutral. Good habits are those that develop positive values and create beneficial impacts in a person’s life. The habits that negatively affect an individual’s everyday life, performance, and even health are considered to be unhealthy habits. Habits do not always require conscious attention to form but certain unconscious behaviors such as breathing or blinking eyes do not count as habits because they are mostly instinctive rather than acquired through learning. A study has reported that some habits may create more problems than they solve because they get deeply ingrained in the human brain.

Habits are a part-and-parcel in people’s everyday life. They can be both health-promoting and extremely harmful. Effective habits are those that move an individual toward the goal or destination while bad habits hinder, block, or ultimately prevent people from reaching the goal and achieving success in life.

If someone wants to achieve success and get better results in life, he/she must learn how to control or stop the bad habits at a subconscious level and form effective ones. Developing good habits prevents people from using willpower to make healthy choices in life and increase the overall quality of one’s life by offering massive positive changes. Research 3 suggests that the process of forming good habits increases substantially over the period of three months, especially for the individuals who consistently perform the desired behavior during this time. One can reap lifelong benefits by adopting effective habits. The following are some of the important ways through which one can develop effective habits easily and make them stick.

People are not conscious about their habits, good or bad, most of the time. So, it is extremely important to become aware of the habit first. For example, if the finances of a family are in disarray, it displays the bad habit of each family member that they spend more than they earn. It also shows that they don’t practice the good habit of maintaining a budget and sticking to it. Before going forward with a habit, it is necessary to identify and examine it very carefully.

2. Cut a habit into smaller steps and focus on one step at a time

Splitting a hobby into smaller steps and focusing on one at a time makes it easier for a person and ensures consistency also. It is much easier to focus on something small as big life and behavioral changes can be extremely intimidating. According to a 2018 study 4 , “too much change, too fast” often leads to an end without any positive outcome. For example, if someone wants to stay fit and healthy, instead of exercising a lot for some days and have a strict diet, it is much more beneficial to proceed step by step like using stairs instead of elevators, avoiding transportation if the destination is not far away, commuting by bicycle, and walking for at least one hour per day.

3. Replace a bad habit with a good one

The habit loop consists of three distinct phases that include a cue, a routine, and a reward. While a cue is a constant one, the routine keeps changing. The psychology behind controlling a bad habit explains when people remove a habit out of their lives, they have to replace it with another one. If they simply just remove it, the stimulus that triggers the habit remains the same. This condition may lead to people adopting another bad habit. Research 5 has shown that patients who are receiving the treatments of obesity demonstrate improvements in both executive function and reductions by breaking the unhealthy habits and adopting certain healthy alternatives. For example, excessive drinkers often adopt smoking after quitting drinking as the cue such as stress or emotional pressure remains the same. They should start to practice some stress-relieving activity like meditation to substitute the bad habit.

4. Discover the triggers and barriers

Not knowing about the triggers and being unprepared for the upcoming obstacles may set an individual up for failure. It is very crucial to identify and understand the triggers and barriers for developing a good habit. After starting to practice a good habit, one may face several obstacles. But it doesn’t mean that he/she should lose hope and come back to the old bad habits to deal with them. Most people resort to certain unhealthy habits to alleviate the stress. For example, one cannot let boredom, anger, stress, frustration, anxiety be triggers for bad habits; rather one should find some healthy alternatives to his/her usual way of dealing with it.

5. Be positive about the result

Positive thoughts help an individual to build on the skills and result in moments of happiness. It not only enables one to overcome negative thoughts but also to deal with stress-related issues. Being positive about the outcome of practicing good habits enhances the capability of developing effective habits. It doesn’t mean that one should ignore everything that happens and continue with daily activities. Being positive refers to reacting positively to all the unpleasant happenings. However, people should minimize their worries and focus on practicing good habits.

6. Commit to a decision

Making a decision and committing to it may sound easy but it is not. Procrastination makes it extremely hard to change a bad habit. Committing to a decision is not only about a promise that one makes to achieve the goals but also the dedication to utilize the energy and time to a particular thing. The longer one puts off taking action, the more the bad habit will ingrain his/her mind. A conscious commitment is very essential because it helps to proceed forward rather than only making plans about proceeding.

One cannot build a new habit within a few days without any hassle. People may face failures many times before adopting a good habit successfully. But a well-organized plan focusing on the small success moments can help immensely in this regard. A good plan to deal with failures develops long-lasting perseverance and resourcefulness habits.

Relishing the small wins adds the motivation towards achieving something bigger. It helps people to maintain good habits for a long time. Small rewards stimulate the brain circuit that provides one the sense of achievement. Receiving rewards at each successful step boost strength and power also.

The process of forming a habit is a significant activity that develops a desire within an individual to repeat a specific behavior numerous times. Associated with the concept that habits are unconscious, forming new habits consciously won’t create much impact. Certain habits become hard to break as they are deeply wired in the human brain. Habits are considered to be certain patterns of behavior and one can break the habits by breaking the patterns. Identifying effective habits, being around positive people, following a routine, discovering the triggers and dealing with them, developing a substitute plan, and strengthening willpower may work great in this regard. The psychology of forming a habit helps one to lead a healthier, productive, positive, and successful life.