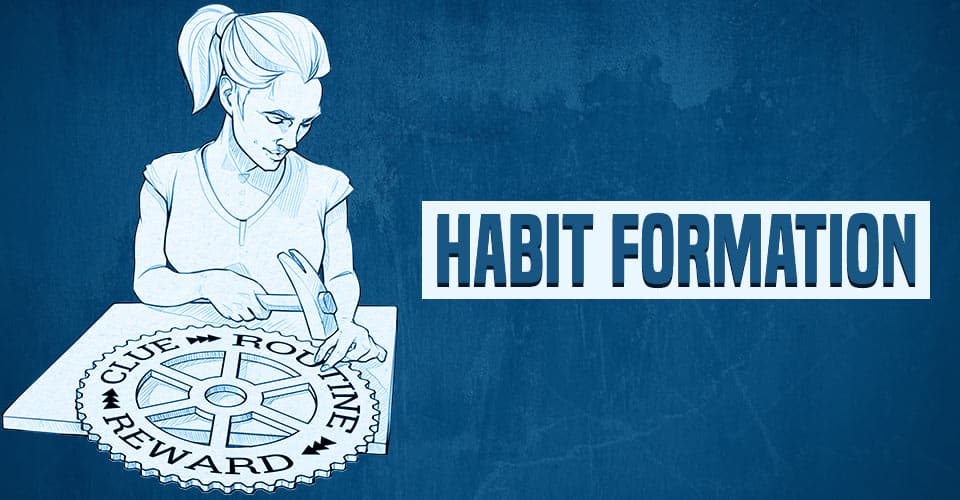 Habit formation refers to a process by which the behaviors of humans become automatic and regular. Habits can form within an individual through repetition or conditioning but can also be eliminated if necessary.

What Is Habit Formation?

Habit formation is the simple process of changing behaviors and making them programmed through constant learning, repetition and experience. Habitual behaviors are not performed with conscious awareness or attention and are often executed as an automatic response. “Habits make up a major part of our behavioral and cognitive lives,” and “many reward-seeking habits could involve multiple signaling mechanisms in the brain,” explain researchers 1 . In fact, some habits can be developed or removed without any deliberate effort or intention. Regardless, habits can be difficult to build or break. Developing new habits may require time and patience as it may take around 18 to 254 days to build a habit, according to a study 2 .

To put it simply, a habit refers to learning or behavior change. Human behavior develops to an extent and becomes highly automatic. Then it is defined as a habit. They are built to make things happen without allowing the people to think much about them. A 2017 research paper 3 describes habit as a settled or regular tendency, especially the one that is hard to give up. Mostly they are formed by the process of learning and repetition. Habits can be both health-promoting and extremely harmful.

Some of the most common examples of healthy habits include –

Some of the examples of widespread unhealthy habits include –

Research 4 has shown that “behavior is likely to become habitual when it is frequently and consistently performed in the same context.” Moreover, it was also found that self-control capacity does not affect the process of building a new habit.

The term habit is strictly associated with motor responses. The psychology behind the concept of habit formation lies in how one can create effective habits and break the bad ones. Habits play an extremely important role in people’s lives as they impact different areas of life such as rate of success, daily routine, hard work and outcomes. When a behavior becomes repetitive and automatic by a specific process sometimes even without any awareness, the process is termed habit formation. The process of forming a habit can be described by two perspectives that include psychological and physiological.

This perspective is entirely related to the nervous system. According to a 2012 research paper, a significant neural connection is formed when an individual starts to repeat a behavior automatically. This connection may be responsible for the smooth shifting of nervous energy from sensory to motor. The connection becomes stronger when the stimulus is repeated. The learned and automatic behavior that the connection brings about in the nervous system is called a habit.

Another 2012 study 5 has mentioned a psychological theory associated with the concept of habit formation. This study has considered habit as an acquired disposition and explained, “A mere repetition of a simple action in a consistent context leads, through associative learning, to the action being activated upon subsequent exposure to those contextual cues.” It suggests that any experience or knowledge gained by a person is retained and becomes firmer when repeated. This learning experience or knowledge is known as a habit.

Numerous habits can form within people when they start to navigate the world. Research has shown that certain habits get deeply ingrained in the human brain and due to this, they may lead to certain challenges. People tend to practice usual behaviors or actions several times. Though this particular likelihood towards quick and efficient reactions can be harmful sometimes.

The Science Of Habit Formation

Research 6 has shown that the process of forming a habit can be classified into three simple steps: Cue, Routine, and Reward. These three fundamental steps are the parts of a habit loop, which is a habit formation model and is applicable for any type of habit. The habit loop explains what is a habit, how it works, forms, and how one can improve it. The three significant parts include, Cues, Routine, and Reward and are the backbone of every habit. The human brain functions through these steps every time in the same order.

The three steps of the habit loop are:

The process of forming a habit always starts with a cue. A cue is something that triggers the brain to initiate behavior and acts as a bit of information to predict the reward. The human mind continuously analyzes different internal and external environments searching for any kind of reward location. A cue indicates the brain about the location of a reward. It can be a location, a specific time of the day, a particular smell, the emotional state of a person, or any preceding action.

Routine is the second step of a habit loop and the actual behavior one wants to change or enforce. It is considered to be the action part of a habit that one takes immediately following the cue. Routines are often subconscious as the person is mostly unaware of the realization that he/she is doing something in a certain way. It can be a completely conscious action in which one tries to create a habit loop from a cue to a reward. Routines can be of two types such as:

A good routine is something that one likes to reinforce, such as waking up early, drinking more water, exercising regularly.

A bad routine refers to behavior that one wants to change such as smoking or drinking excessively or biting nails.

Habit Vs. Addiction Vs. Routine

Habits and addictions are strongly interlinked with each other but a habit is not necessarily an addiction. A habit refers to any conscious behavior that people practice on a routine basis. Meanwhile, the certain behaviors that people do excessively and experience difficulty in controlling them is termed addiction. Moreover, lack of self-control may strongly influence addiction. A 2016 research paper 7 explained that habits are the results of certain mental activity but addiction affects mental stability. This study described that addictions are some chronic diseases of the brain that arise from habits in more extreme form. The most important distinction between habits and addictions is that choice is still possible to an extent with habit-forming behaviors.

Similarly, a routine is not considered a habit. The difference between habit and routine is pretty straightforward. According to a study, the most significant difference is associated with a part of the human brain called the basal ganglia. This part is more affectionately known as the habit center of the brain. It allows the behaviors or actions to occur automatically after being triggered by a cue. The term ‘routine’ is used for defining a repetitive action or behavior of people. But an integrated impulse is not necessarily involved in this process while habits are performed in response to certain integrated impulses. Routines are several conscious efforts that people practice to transform their lives for the better and create habits.

Habits are mostly learned rather than being innate and developed through reinforcement. The repetition of behavior is encouraged by reinforcement when the stimulus provokes the behavior. American psychologist and philosopher Willian James 8 considered habits as extremely useful for conserving higher mental processes and more demanding tasks, though they promote behavioral inflexibility. Habits can be categorized into four types regarding the nature of activities.

The following are the four types of habits:

People express their characters by performing certain habits that are a significant part of their daily routine. Habits can be unique to people’s characters or can be common with their characters’ community. Character habits are often termed emotional habits as they involve an essence of emotions and feelings. The behaviors and actions that an individual character does very frequently, become automatic and extremely hard to change or stop. Some examples of character habits include trusting people, being honest and friendly, working hard etc. Such habits develop human personality as they grow older.

Motor habits are associated with certain muscular activities of people. These kinds of habits always involve different movements of the body. These should be performed with care as practicing wrong movements can cause danger and be picked up by the cerebellum. This condition may lead to creating a bad habit such as bad posture. A 2018 research paper has shown that motor habits may change over time but remain stable a few weeks after forming. Some of the most common physical actions related to motor habits include running, walking, maintaining a specific posture etc. Motor habits form by practice and become automatic after a point in time.

Keystone habits refer to the small modifications in people’s daily routines. These habits trigger the formation of other habits. People often unintentionally carry over such habits into various aspects of their lives. One example of this habit can be someone who likes to take care of his/her body, and is habituated to exercise regularly.

These habits are considered to be associated with psychological processes that require intellectual habits. These can be formed by practicing positive thinking skills constantly which can become instinctive over time. A 2018 study 9 stated that consciousness plays the role of a precursor for the activation of intellectual habits. Some examples of these kinds of habits include logical thinking, observation, reasoning abilities, and accurate perception.

The process of forming a habit is an important activity that develops a desire within an individual to repeat a specific behavior persistently. As habits are mostly unconscious, forming new habits consciously won’t create much impact. But there are certain ways through which one can trick the brain and trigger the stimuli of better habits without a direct effort. Identifying effective habits, being around positive people, following a routine, and strengthening willpower may work great in this regard. The psychology of forming a habit helps one to lead a healthier, productive, positive, and successful life.

Habit Formation At A Glance