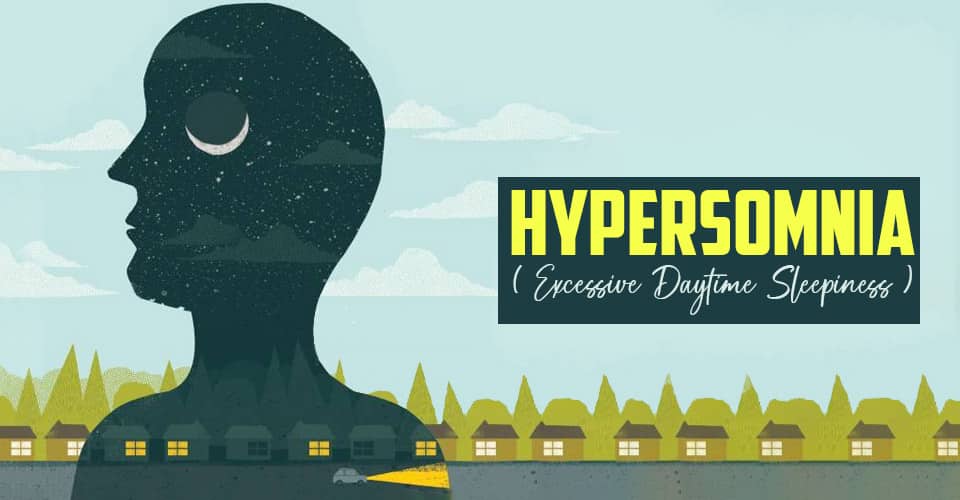 Feeling sleepy is a common experience, but excessive daytime sleepiness can affect the quality of your life. Hypersomnia or Hypersomnolence leads to excessive sleepiness despite having more than 7 hours of good quality sleep.

Hypersomnia is a neurological disorder. This condition is characterized by repeated episodes of excessive and chronic daytime sleepiness. Prolonged sleepiness during the night can also be considered as a part of this disorder. The American Academy of Sleep Medicine characterized Hypersomnia as a “pathological condition recognized by a lack of alertness during the waking episodes of the day”. Although originally known as hypersomnia, it is now mostly identified as hypersomnia or excessive daytime somnolence. This is primarily because the term hypersomnia did not cover all aspects of the condition’s definition.

The American Sleep Association reports that “the condition is more prevalent in men than in women, affecting approximately 5% of the population.” Instead of feeling tired or sleepy at night or enjoying interrupted nighttime sleep, people with this condition feel a compulsion to fall asleep during the daytime. As a result, they often nap during study, work, while having lunch or dinner, during social interactions, and at other inappropriate times. However, sleeping during the day does not help to alleviate the symptoms. Moreover, sufferers often find it challenging to wake up from a long sleep and may even experience dizziness and disorientation.

Hypersomnia can be a problematic disorder since it can greatly affect a person’s ability to perform regular tasks and function on a daily basis. Surveys 1 conducted by the National Sleep Foundation indicated ”30% of the respondents suffer from Hypersomnia that interferes with their quality of life”.

Hypersomnia At A Glance

Types And Stages Of Hypersomnia

According to experts, this condition can be categorized into 2 major types, primary and secondary. The primary form of this disorder is rarer than the secondary type.

It occurs when there are no other medical conditions present. The only symptom, in this case, is excess fatigue.

This occurs due to pre-existing medical conditions. Sleep apnea, Parkinson’s disease, kidney failure, and chronic fatigue syndrome are examples. These underlying conditions can cause poor quality sleep which ultimately makes an individual tired during the day.

Hypersomnia isn’t related to Narcolepsy. Narcolepsy 2 is a neurological condition that causes sudden uncontrollable sleep attacks during the day. People with Hypersomnia can stay awake and have total control over their sleep. But they usually feel restless and tired.

This condition can be further divided into three main stages:

What Are The Symptoms Of Hypersomnia?

The primary symptom of hypersomnia is excessive sleepiness despite getting quality sleep every day. The Diagnostic and Statistical Manual of Mental Disorders, fifth edition, has a new diagnosis of “hypersomnia disorder (HD),” which is described as “the main sleep disorder most similar to the diagnosis idiopathic hypersomnia (IH) in sleep literature and can be missed in psychiatric settings.”

Here are some of the most common physical and psychological symptoms of hypersomnia:

Common physical symptoms as laid down by the Diagnostic and Statistical Manual of Mental Disorders, fifth edition (DSM-5) 3 may include:

If symptoms last for more than 3 months, it is considered persistent and requires immediate medical attention. So if you are experiencing any of the symptoms mentioned above, make sure you consult a doctor to address your concerns.

There is a possibility that an increase in the brain chemicals in an individual can cause this condition. However, researchers are still looking for answers on what interactions in the brain cause hypersomnia. They believe that an unidentified specific substance or molecule that may be involved in Hypersomnia interacts with a substance called y-aminobutyric acid (GABA) 4. GABA is a brain chemical that is responsible for promoting sleep in human beings.

There are several other factors that can cause hypersomnia, such as:

There are no known risk factors that contribute to this condition. Some people experience it without any reason. When this disorder is experienced without a known cause, it is identified as Idiopathic hypersomnia (IH) 5 which affects only 0.01 to 0.02 percent 6 of the population.

How Is Hypersomnia Diagnosed?

In order to have a correct diagnosis, a thorough examination is necessary. The doctor usually reviews the patient’s medical history and his symptoms to diagnose Hypersomnia.

The doctors may use several tests to diagnose Hypersomnia, including:

The doctor recommends the patient maintain a diary where they record their sleep and wake times in order to track sleeping patterns.

Patients rate their sleepiness in order to determine the severity of the condition.

Patients take a nap which is monitored during the day. The test is designed to measure the types of sleep the patient experiences.

The patient is required to stay over at the sleep center. This machine monitors brain activity, eye movements, heart rate, levels of oxygen, and breathing of the patient in order to determine what is causing it.

Your doctor may ask you a set of questions to understand the severity of your disorder. They may include:

The doctor may also review your medications so that they can identify if your medications are causing your hypersomnia. They may also recommend that you get a sleep study. The sleep study involves an overnight sleep in a sleep lab where a person is hooked on to various monitors including a pulse oximeter, an electrocardiogram, and a brain wave monitor. This equipment helps the doctor to identify if a person’s daytime sleepiness could be due to a sleep disorder, such as obstructive sleep apnea.

If there are no signs or any underlying disorder, your doctor may diagnose you with Hypersomnia.

How Is Hypersomnia Treated?

The DSM-5 has categorized Hypersomnia as a “sleep-wake disorder”. Treatment for this disorder should be directed towards the cause of onset, if there is any. If it lasts for more than 3 months, then it is recommended that you seek professional help. Hypersomnia, if left untreated, can interfere with the quality of life and have adverse effects on the human body.

There is no evidence on why human beings need to sleep but it is crucial to have quality sleep every day. Not having adequate sleep can make an individual less productive and restless during the day and may even cause physical harm. There are several methods with which hypersomnia can be treated, such as:

Once you visit a doctor, they will start by analyzing your medical history. Here are some of the most common medications that are prescribed to treat this condition:

Your doctor may recommend some lifestyle modifications in order to cope with hypersomnia and control your sleep pattern. They include:

Taking scheduled naps has proven to reduce daytime sleepiness without interfering with the quality of sleep at night. It is of utmost importance to keep the naps between 15 to 20 minutes to make this method effective. Sleeping for more than 30 minutes can result in sleep inertia.

What Can You Do To Beat Hypersomnia?

According to the National Health Service (NHS) UK, here are some of the things you can do that might make you feel better. It’s not a cure for hypersomnia, but making some changes in your sleeping habits may make a big difference.

Make sure that you try to:

If you still feel sleepy then it’s best to seek help from a medical professional. Your doctor can conduct tests in order to determine if you have Hypersomnia or excessive sleeping disorder.

Can You Recover From Hypersomnia?

Simple lifestyle changes can significantly improve the condition of a person suffering from Hypersomnia. However, medications prescribed by the doctor also play a crucial role in extreme cases. It is not a life-threatening disorder but has a significant impact on one’s day-to-day life. There is no prevention for excessive sleeping disorder but you can considerably reduce the risk of developing it by creating a calm and peaceful sleeping environment and avoiding drugs and alcohol.

Hypersomnia is very common in the present day due to technological advancements and living in a dynamic environment. If you think you have these symptoms, consult a doctor about your concerns.