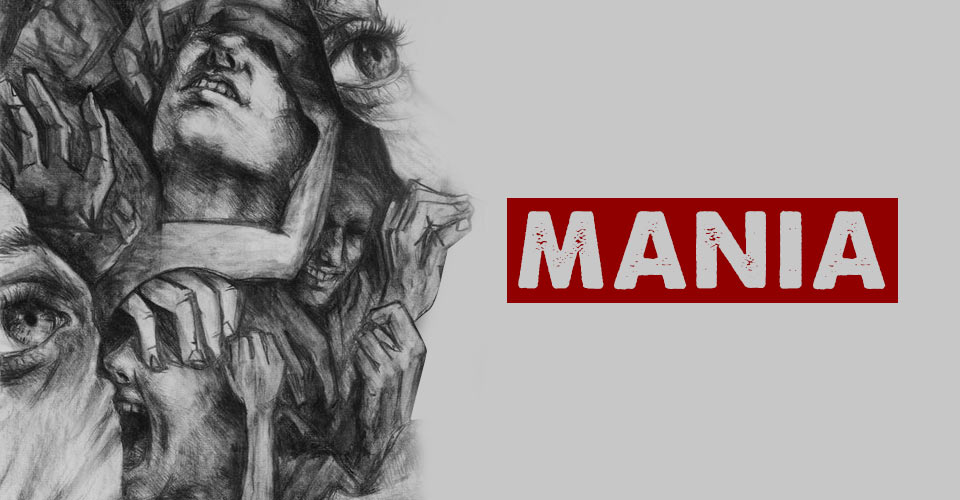 Mania is a disabling psychiatric disorder that affects a person’s physical health and mental wellbeing. Mania is often associated with bipolar disorders, schizoaffective disorders, and psychosis.

Experiencing uncontrolled psychomotor acceleration, the person engages in goal-oriented activities with negative consequences and this causes major deficits in his/her social and occupational functioning. This consequently harms relationships, reputations, and careers. Other consequential complications include engagement in violence and substance abuse, harboring of suicidal instincts, and causing harm to self and other.

Mania should be distinguished from “heightened states” induced by substance abuse or medications. It should be considered in its entirety a multi-dimensional “natural state” associated with bipolar disorders, schizoaffective disorders, or other medical disorders. Research 1 shows that it is a common mental disorder, with 0.4–1.6% of adults experiencing an episode of mania at some point in their lives.

Mania, with bipolar and schizoaffective disorders, are diagnostic criteria for each other and this can aid in gauging the prevalence of mania. Both men and women are equally affected by mania, the median age of onset of the disorder being age 25. Men typically experience an earlier onset, whereas women are susceptible to severe mood disorder episodes in a given year. Most research reports that, statistically, 0.4–1.6% of adults will have an episode of mania at some point in their lives. There is some more recent research that reports this rate may be as high as 5–7%. Data concerning mania, however, are frequently inadequate, especially in developing and underdeveloped countries, owing to social taboo surrounding mental health, dearth of information about and unawareness of mental disorders, and lack of medical infrastructure.

Most of the time, Mania is a key-component in medical conditions and psychiatric disorders–because of which, it is a multi-dimensional syndrome and varies in intensity. It ranges through mild, moderate, and severe and is divided into three stages:

Mania can also manifest itself in mixed affective states 2 . According to the American Psychiatric Association’s DSM-5, a person is taken to be experiencing a “manic episode” when she/he experiences, for a period of time (spanning 4 days to 1 week), three or more concurrent symptoms of mania (catatonia, disorientation, incoherence, and florid psychosis) and associated mental disorders like depression 3 , cyclothymia 4, bipolar disorders 5 , schizoaffective disorders, etc.

The etiology of mania is not known and its cause is attributed to a plethora of genetic, psychological, and social factors.

Mania can be transmitted through genetic constitution. For instance, multiple family studies 6 involving monozygotic twins have confirmed the genetic factor in monomania, citing that almost 80% of twins are concordant for mania when/if one of the siblings are positive for the disorder. Other studies show that several allele frequencies are involved in mania.

The pathophysiology 7 of mania and the associated bipolar disorders and schizoaffective disorders reveal that the neurocognitive profile of mania is highly consistent with dysfunction in the right prefrontal cortex and right hemisphere lesions. Disorders in thalamic activity and behavioral activation system activity, a failure of serotonergic regulation, and dopaminergic hyperactivity point to triggering manic episodes. Mania is also caused by abnormalities in GSK-3, Protein kinase C, and Inositol monophosphatase. It is also associated with medical conditions and neurological conditions like stroke, Parkinson’s disease 8 , lupus, and brain injury as well as triggers like antidepressant therapy and medications that use glutaminergic agents.

Anecdotal evidence further points to psychosocial factors that trigger manic phases, such as physical trauma, prolonged illness, or stressful life events (involving grief, childbirth, seasonal changes 9 ). Lifestyle choices like sleep deprivation, recreational drug and alcohol abuse, and irregular schedules also cause mania. It is also associated with personality disorders, which are themselves products of environmental dictates of the afflicted.

In the original study 10 of manic-depressive insanity, Emil Kraepelin inferred the fundamental clinical triad for the recognition of the disorder, namely, euphoria, pressured speech, and hyperactivity. Western psychiatry stuck to these historical diagnostic criteria until the publication of the Feighner Criteria, the Research Diagnostic Criteria (RDC), and the Diagnostic and Statistical Manuals of Mental Disorders (including DSM-III and successive DSM editions) in the later half of the 20th century. These studies emphasized mood abnormalities, along with the other symptoms. A 2020 study 11 lists 37 clinical variables for mania. However, mania has a subset of homogenous symptoms:

The common mnemonic “DIG FAST” [Distractibility, Irresponsibility or Irritability, Grandiosity, Flight of ideas, increased Activity, decreased Sleep, and excessive Talkativeness] is employed by clinicians to enquire into suspected mania. Sometimes, increased sexuality and sociability are also associated with mania. Nonetheless, the varied nature of mania means that the psychiatric verdict on its key constructs is derived more from expert consensus than empirical data.

When a patient presents with mania, an exhaustive evaluation is carried out to rule out other differentials. The basic laboratory values needed in assessing a manic patient include:

While “DIG FAST” is used to understand the basic symptoms of mania, scientific tools and mania-rating instruments such as Altman Self-Rating Mania Scale and Young Mania Rating Scale 12 can be used to measure severity of manic episodes.

Mania, much like other mental health disorders, can be treated in a number of ways:

Following thorough differential diagnoses 13, mania is treated with atypical antipsychotic medication 14 (consumption of haloperidol, risperidone, olanzapine, quetiapine, aripiprazole) or the utilization of mood stabilizers (consumption of carbamazepine, valproate, lithium, or lamotrigine) and anticonvulsants. The use of medication 15 is influenced by a number of factors: the patient’s current and prior medication history; the need for rapid resolution of agitation and aggression; the characteristics of the manic episode; the presence of rapid cycling; the patient’s own willingness to accept particular therapies and routes of administration. Medication aids functional recovery in the long-term if taken punctually and with therapy.

Manic patients can seek psychiatric help in therapy that explores faulty cognitions and psychological distress and seeks to address the “integration of service users’ thoughts, feelings and behaviors that are contributing to the presenting problem”. Manic patients can avail counseling sessions, psychotherapy 16, cognitive behavioral therapy (CBT) 17 , or other forms of therapy that encourage patients to develop self-help coping strategies and healthy lifestyle choices. In some cases, long-term prophylactic treatment (combining pharmacotherapy and psychotherapy) is used to treat mania. In clinical practice, cases of mania employ combination therapy for functional recovery in the long-term.

Psychoeducation, social support, and support groups are long-term combatants of any psychological disorder (including mania) for patients, their families, and caregivers.

Severe manic episodes call for hospitalization and management of violent and aggressive maniac patients in well-equipped medical facilities by an efficient interprofessional team consisting of a psychiatrist, a psychologist, a mental health nurse, a primary care provider, and a social worker. In rare cases, electroconvulsive therapy (ECT) 18 is administered to people experiencing life-threatening manic episodes.

A person suffering from mania (and its related disorders) is advised to:

Like most other psychiatric disorders, mania can be managed if treated timely and patients are punctual adherents of therapy and medications. Convalescence is uncertain and guarded, given that recuperation is sometimes vulnerable to volatile relapses into violence, substance abuse, depression, and/or even suicide. Recovery from mania is also influenced by factors such as a history of abuse, low socioeconomic status, inability to afford expensive mental healthcare facilities, comorbidities, the longevity of mental illness and suffering, or sudden triggering events. Nonetheless, recovery is possible.

Mania At A Glance