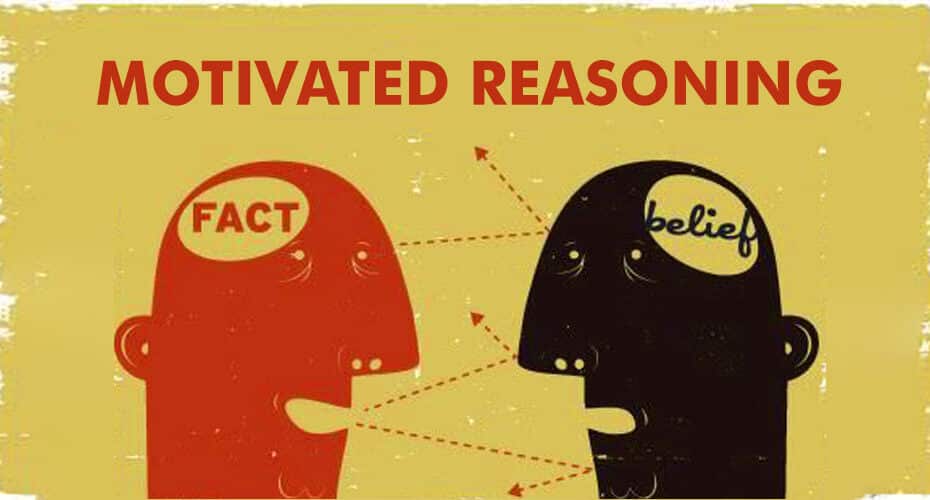 Motivated reasoning is a psychological concept that focuses on the impact of emotions on human reasoning and behavior. It is believed that our reasoning can be strongly influenced by emotional attachments and biased motives.

What Is Motivated Reasoning?

Motivated reasoning, also known as motivated cognition, refers to our natural tendency for seeking reasons & justifications that support our desires and beliefs and confirms that these are more prominent than contradictory evidence or arguments that challenge our desired outcomes. To put it simply, it is reasoning that serves our own self-interests. It is our subconscious psychological inclination to process new or available information and reach conclusions which fits our preconceived and preferred goals. The desired goals tend to influence our cognition and regulate mental functions, such as sensory perception, logical reasoning and ability to deduce evidence.

According to social psychology, individuals experiencing this phenomenon make decisions based on emotionally charged and biased reasoning. It can influence them to create rationalizations, explanations, justifications and confirmations that are colored by their desires instead of based on the truth or available facts. However, this can occur while still limiting their conflicting attitudes or cognitive dissonance. This psychological concept is associated with confirmation bias, which is a cognitive error that makes us seek information that supports our beliefs. However, confirmation bias 1 is based on logic, instead of emotional motivations.

According to a 2000 study 2 , motivation tends to influence reasoning “through reliance on a biased set of cognitive processes,” which may involve ways to access, build and assess beliefs. “The motivation to be accurate enhances use of those beliefs and strategies that are considered most appropriate, whereas the motivation to arrive at particular conclusions enhances use of those that are considered most likely to yield the desired conclusion,” explains a 1990 research paper. The researchers found that we are more likely to believe in conclusions or outcomes which we mentally and emotionally desire. However, our ability to do so is limited by our “ability to construct seemingly reasonable justifications for these conclusions.”

Typically, our mind tends to process new information based on our existing beliefs and experiences. As we tend to strongly hold on to beliefs we are emotionally attached to, it is highly unlikely that we may change such beliefs when exposed to new information that contradicts or disproves those views. This happens because we are emotionally invested and attached to our long held beliefs and realizing or accepting that they are incorrect or false can cause severe emotional & mental pain. Hence, motivated reasoning encourages us to cling to our wrong and mistaken beliefs and perceptions even when substantial contrasting evidence is present. The preferred conclusion filters analysis of available facts and opinions of others. Motivated cognition or reasoning pertains to a process of reasoning where individuals acquire, construct and analyze arguments in a ‘motivated’ or biased manner. This leads them to endorse or arrive at preferred conclusions. The word motivated here means people use reasoning strategies which allow them to arrive at the conclusions they intend to draw. It refers to circumstances where people are keen on confirming their preferred conclusions and not on conclusions driven by a motivation for accuracy.

According to a 2015 study 3 , generally emotions and affect can “powerfully drive any of the motivations, both epistemic and directional.” The study also found that emotion can cause explanatory bias which encourages a person to understand and explain their own emotions to themselves in a manner which confirms and rationalizes the emotions. Moreover, we may also be influenced by multiple motives simultaneously. While some of these motives may encourage us to seek the “most accurate explanation,” other motives may support specific explanations that serve crucial directional purposes. When we have competing explanatory goals, we can opt to satisfy some or may be all of them.

Motivated Reasoning At A Glance

Personal threats can often trigger this phenomenon in an individual. When not faced by any threats, an individual may seek the most logical and appropriate outcome instead of the desired outcome. Decisions that require less involvement will not encourage motivated reasoning, even if the conclusion is not preferable. This happens because their self-esteem is less affected by the poor outcome of their decision as compared to the conclusion of a decision that requires more involvement. As these personal threats to the individual can emerge from a wide range of sources and present in different manifestations, the phenomenon may be triggered by a range of outcomes or conclusions.

According to a 2006 study 4 , “Motivated reasoning is a form of implicit emotion regulation in which the brain converges on judgments that minimize negative and maximize positive affect states associated with threat to or attainment of motives.” Some common outcomes associated with different types of threats to the self may involve conclusions which:

We are more driven to engage in this phenomenon when our sense of self, future state and perceptions are concerned.

It has been generally observed that most parents tend to believe that their children are talented or people on diets affirm that having ‘cheat days’ will not affect their fitness goals. Whether or not such beliefs are true, the truth is our beliefs are shaped by our preferences. We usually believe what we want to believe, regardless of whether our beliefs accurately reflect the truth or not. However, this may not always be the truth. According to a 2016 study, motivated reasoning guides our ‘motivated beliefs’. The study explains “People generally reason their way to conclusions they favor, with their preferences influencing the way evidence is gathered, arguments are processed, and memories of past experience are recalled.” However, these processes are subtly impacted by our motivations, which can cause “biased beliefs” that appear unbiased and objective. “People reason to prepare for action, and so reasoning is motivated by the goals people are trying to achieve,” adds the study.

It is also believed that certain cognitive processes are also involved in this phenomenon, along with emotional and motivational processes. Research 5 shows that motivated cognition or reasoning is related to activations of the following –

But, the researchers found that it is “not associated with neural activity in regions previously linked to cold reasoning tasks and conscious (explicit) emotion regulation.” The findings suggest that this psychological tendency is “qualitatively” different from reasoning particularly when an individual does not have any strong emotional involvement in the outcomes or conclusions.

According to a recent 2020 research 6 , “motivated reasoning posits that individuals may use a biased set of cognitive processes to resolve conflicting beliefs in favor of a self-serving resolution.” The researchers observed that when a person anticipates low perceived behavioral control towards a particular action or behavior that contradicts or opposes their preferences, they may avoid, discount or deduct specific factors. The person may also allocate excessive value to some other factors which justifies their desires. In fact, studies 7 have found that motivational factors can significantly affect cognitive performance in adults as “motivation is a crucial determinant of action.” One 2017 study 8 further found that motivation-cognition interaction plays a crucial role in the decision-making process 9 , Moreover, both cognitive control and motivation helps to shape our goal-directed behavior.

Here are two theories that can help to further explain the mechanics of motivated reasoning:

This refers to when an individual is motivated to reach a directional goal. Goals can trigger an individual to have biased reasoning, whether unconsciously or consciously. Goals and objectives can lead to better utilization of knowledge, experience, information and even memories, especially the ones that are aligned with our directional goals and preferred outcomes. However, this motivation can also affect our beliefs and processes that are used to seek necessary information. According to a 2014 study 10 , goal-directed reasoning and decision-making may depend on a number of sources of information other than the currently “available sensory stimuli, such as representations of (proximal and distal) goal states and their utility, memory and predicted future states.” However, a 2017 study 11 revealed that people with negative affect and mindsets or negative symptom-like experiences (NSLE), are unable to commence & perform goal-directed behavior. “People with NSLE generate more avoidance 12 goals than controls,” adds the study.

Although an individual experiencing motivated cognition may avoid evidence that questions their reasoning, it doesn’t necessarily mean that they will not seek logic and accuracy in their biased reasoning. People with such biased and inaccurate perceptions need to protect their illusion of objectivity. This means “they tend to see themselves as being more objective, more even-handed, more insightful and less biased than they really are,” explains a 1999 study. Objectivity illusion is our inclination to observe ourselves as insightful, impartial and more importantly, less biased. This allows us to present a counter-argument when presented with compelling evidence. It helps us to uphold our motivated cognition and reasoning as logically valid. However, the validity of their reasoning may be limited only to the individual.

According to a 2009 study 13 , “accuracy motivation is the desire to form accurate appraisals of stimuli.” This leads to tendencies for processing information in an unbiased, open-minded and objective manner. When a person is accuracy-driven in their approach, they may arrive at the conclusion slower than people who are goal-driven. The process of seeking accuracy in reasoning enhances the quality and quantity of processing. This can result in more complicated cognitive processes. However, it has been observed that due to detailed processing and the need to seek accuracy, a person may become less biased towards reasoning. Accuracy goals can limit biases in various aspects. “Accuracy motivation should direct individuals to information of the highest utility regardless of its congeniality and may therefore weaken the congeniality bias,” adds the 2009 study.

Most of us are prone to jumping to conclusions that we desire. However, we can often get discouraged or prevented by our ability to form reasonable justifications for such preferred conclusions. Regardless, motivated cognition can significantly affect our thoughts, mindset, perceptions, beliefs, behaviors and actions, either positively or negatively. This can impact our education, career, relationships, social and personal lives. However, it is possible to overcome motivated reasoning by being more open-minded towards new information and by seeking accuracy in reasoning. According to a 2016 study, “While research on motivated reasoning has shown that people often maintain preexisting attitudes through biased reasoning processes, it is important to note that attitudes can and do change in response to new information.”

So if you are trying to manage your motivated reasoning and improve your life, make sure you acknowledge new information in a truly objective way. Consulting a therapist may also be a good idea if such tendencies are affecting your ability to function in daily life and your interpersonal relationships.