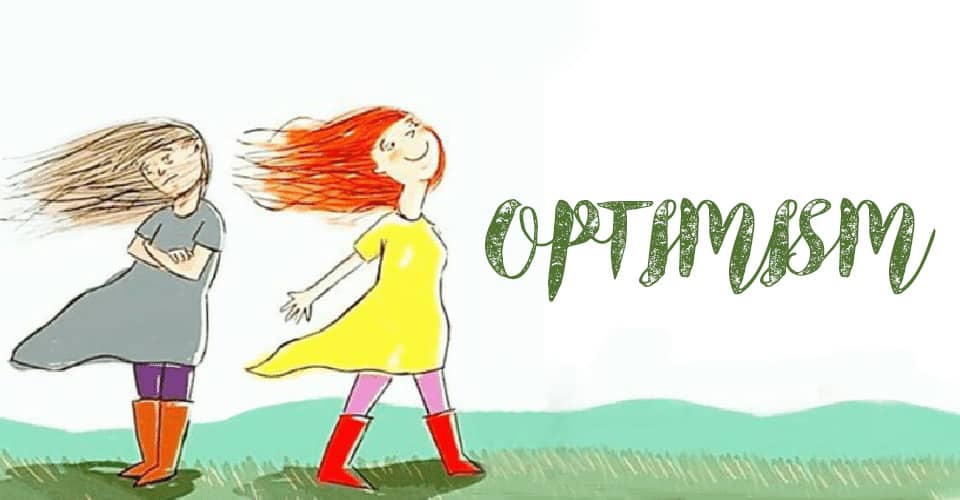 Optimism can be defined as a positive mental outlook characterized by hope and confidence in a positive and favorable future.

Optimism is an attitude that is characterized by embracing positivity and the tendency to believe in a better and favorable future. The experts at Mind Help explain that it refers to our “innate hopefulness. It is the positive attitude that makes us believe good things will happen to us and our goals will be accomplished eventually.” Optimistic individuals tend to predict desirable outcomes either through chance or effort and perseverance. The term derives from the Latin word “optimum” meaning “best”.

A 2010 study 1 explains that the concept “embraces two closely correlated concepts: the first is the inclination to hope, while the second more generally refers to the tendency to believe that we live in ‘the best of all possible worlds’.” The heritability of optimism is estimated to be approximately 25%. A 1993 twin study 2 suggested that there may be a substantial genetic effect on optimism.

Optimists tend to consider hardships as learning opportunities. Even in unfavorable situations, they believe that tomorrow will be better. Evidence suggests that optimistic people present a higher quality of life compared to those with low levels of optimism. A 2010 study suggests that people with this mindset are often linked with numerous benefits such as good coping skills, better health, lower stress levels, and more achievements. A 1995 study 3 found that optimistic people were more able to prevent health problems than pessimistic people. Hence being an optimist can go a long way in achieving success and having a positive outlook towards life.

A 2007 study 4 demonstrated that in the presence of severe pathological conditions, optimistic people tend to adapt better in such extreme circumstances. It is essential to keep in mind that positive and negative expectations regarding the future are important for understanding the vulnerability to mental disorders, in particular to mood disorders. A 2001 study 5 found an inverse correlation between optimism and depressive symptoms, as well as suicidal instincts 6 .

The key characteristics of an optimistic person are as follows:

There may be several factors that influence optimism. However, in order to determine whether a person is an optimist or pessimist depends on how they explain the events of their life.

It is also known as the attribution style. This refers to how people explain the different events of their life. There are usually three ways on how people can explain their life events. These can influence whether the individual is an optimist or a pessimist. However, realists tend to see things clearly. But most people are not realists. They tend to attribute their life events either optimistically and pessimistically.

A. Stable Vs. Unstable

Stable refers to when the individual believes that with time things will change for the better. On the other hand, unstable refers to when the individual thinks that things will not change despite the passage of time. Hence distinction can be made between optimists and pessimists on the grounds of whether it is possible for time to change things or does it remain constant regardless of time?

B. Global Vs. Local

Optimists describe positive events as an occurrence of their own actions (internal) or characteristics. They also tend to see them as evidence of more positive things that will happen in the future (stable). It also involves other areas of life as well (Global). On the contrary, people who believe in optimism see negative events as not their fault (external). They also believe that these events occurred by chance and have nothing to do with other areas of their lives or future events.

For instance, if an optimistic person gets a promotion, they are more likely to believe that it occurred because they are good at their job and will receive more benefits and promotions in the future. If the promotion was passed over to someone else, it’s likely because they are having a bad month because of unexplainable circumstances, but will do better in the future.

Pessimists believe that negative events occur due to their own mistakes or traits (internal). They believe that one mistake will lead to more mistakes (stable) and it will also occur in other areas of life (global). Pessimistic people also believe that positive events occur by chance and they have no control over it (external) and it probably won’t reoccur (unstable). For instance, in case a pessimist gets a promotion, they will see it as a lucky event that won’t reoccur. They also may worry that they will be under more vigilance. If it was passed over to a different person they will think that they weren’t skilled enough to get it. Hence, they would expect it to be passed over again.

How To Develop An Optimistic Mindset

Practicing optimism works in the favor of the individual because they recover quickly from negative events. Positive events tend to affirm their belief in themselves and ensure the continuance of good things in their life. Hence, if you are a pessimistic person you can actively participate in practicing optimism. It is possible to develop learned optimism 7 . Pessimists can attempt to be optimists by analyzing their thinking towards adversity and consciously challenge negative self-talk. Some of the practices that can be inculcated in life to become an optimist are as follows:

Mindfulness involves being aware of the present moment and focusing all energy on the now. This technique helps to cancel out all the worries of the future and regrets of the past by being present in whatever is happening at this moment. A 2017 study 8 pointed out that if an individual places complete focus on the present, they are less likely to dwell on negative past experiences or unforeseen future events. Mindfulness allows you to appreciate the moment for what it is and be less consumed with regrets and anxiety.

Gratitude refers to giving thanks to even the little things in life. It is a way of showing appreciation for all the good things in life. A 2018 scientific study found that participants who were asked to write and maintain a gratitude journal showed signs of increased optimism and resilience. If you wish to develop an optimistic attitude, it is advisable to set aside a few minutes every day to jot down everything you are grateful for.

Writing down positive thoughts can help to improve optimism. A 2018 study that expressive writing focused on positive emotions were directly linked to decreased mental distress and improved mental health.

A 2006 research study 9 has shown that practicing optimism and being an optimist can be advantageous. Some of the positive influence of optimism can include:

Research 10 shows that optimists are more likely to maintain better physical health than pessimists. This includes a 50% lower risk of cardiovascular disease and greater survival rates 11 when fighting cancer. Some studies also found higher rates of infectious disease, poor health, and earlier mortality in pessimists. Studies 12 have also found that optimism is also associated with immunity as well.

The father of positive psychology, Martin Seligman, studied sports teams and found that optimistic teams created more positive synergy and performed better than pessimistic teams. Another 2012 study 13 showed that pessimistic swimmers, who were led to believe they had done worse than they had, were more likely to believe they were prone to poor future performance. On the other hand, optimistic swimmers were not vulnerable to it.

Optimists don’t give up easily and that is probably why they succeed. People who are optimistic are more likely to continue working towards their goals despite having obstacles, challenges, and setbacks. Such endurance ultimately leads them to accomplish their goals.

A 2010 study 14 suggests cognitive therapy can be as effective or more effective than antidepressants in the treatment of clinical depression. Such improvements tend to be long lasting. People who have this training in optimism tend to become better able to effectively handle future challenges. One 2015 study 15 found that certain dimensions of optimism such as Positive Expectations (PE) and Sense of Invulnerability (SI) can help to cope with depression and anxiety.

Optimists live significantly longer than pessimistic people. One 2008 study 16 found that 34 healthy Hall of Fame baseball players who played between 1900 and 1950 lived longer due to their optimistic nature. A 2013 study 17 showed that optimistic breast cancer patients had a better quality of life than pessimistic and hopeless patients.

People who practice optimism tend to experience less stress than pessimists or realists. They believe in themselves and their abilities and expect good outcomes. Optimists view negative events as minor setbacks that can be easily overcome and tend to view positive events as evidence of more good events in the future. They also take more risks because they believe in themselves and hence create more positive events in their lives.

A 2008 research study 18 also suggests that optimists are more proactive while managing stress. They prefer approaches that reduce or eliminate stress. Since optimistic people work harder at stress management, they are less likely to be stressed.

Even though optimism can be advantageous, it doesn’t necessarily mean that there cannot be consequences of being too optimistic. Some of the potential pitfalls of optimism include:

In the case of optimism bias, excessive optimism can lead an individual to only focus on the positive things and avoid all the negative things. Optimism bias makes people underestimate the risk of experiencing negative events. Hence, this can lead to engaging in risky behaviors that increase the chances of experiencing a bad outcome.

In some cases, people tend to overestimate positive feelings while ignoring negative feelings. It may also enable people to nullify the emotional experiences that they may go through during difficult times. One 1986 study 19 confirmed optimists tend to use coping strategies that focus on the problem more frequently compared to pessimists. When these strategies cannot be used, they resort to adaptive strategies that are most focused on the emotions, for instance, acceptance, humor, and positive re-assessment of the situation.

When people are over-optimistic, they are less likely to think about the potential risks and take steps to resolve these issues. Hence, they are more likely to run into major problems along the way.

Focusing on a healthy realistic approach to optimism can go a long way to avoid the consequences of being too optimistic. It is essential to embrace the events that are currently occurring instead of focusing on staying positive while ignoring all other emotions. The primary goal is to look at the positive aspect despite the obstacles that may come along the way.