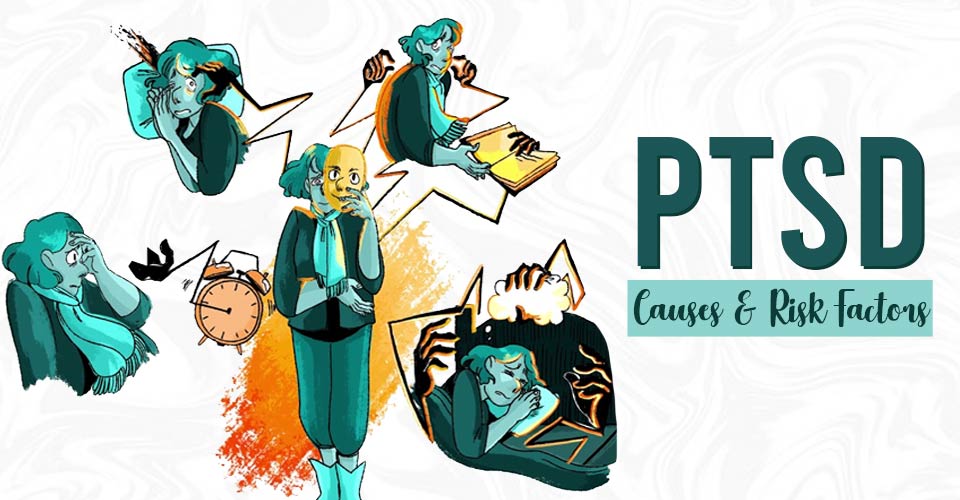 Post-traumatic stress disorder (PTSD) affects people directly or indirectly exposed to a traumatic or life-threatening event. The development of PTSD can be attributed to several factors. Let us take a closer look at the potential causes of PTSD.

Read What Is PTSD Here

Often, two people suffer through the same traumatic incident. One of them goes on to develop debilitating PTSD whereas the other is somehow able to carry on with their life without much difficulty. In fact, it is estimated that 1 in every 3 individuals experiencing a traumatic event may be affected by PTSD.

What makes some people more prone to the risk of PTSD than others?

The causes of PTSD are multifactorial – research suggests that a combination of different genetic, psychological, and social factors may determine how likely a person is to develop PTSD after a traumatic event.

Certain genetic and neurobiological traits can be risk factors for PTSD. Some of the biological causes of post-traumatic stress disorder have been further discussed below.

Transgenerational 1 and twin studies 2 have attested to the genetic component of PTSD. Post-traumatic stress disorder has been seen to run in some families. Monozygotic twins are also more likely to both succumb to PTSD than dizygotic twins, which further reiterates the importance of genes in the development of this disorder.

A smaller hippocampal volume 3 has been indicated as a possible biomarker of PTSD, along with changes in the amygdala, anterior cingulate cortex, and other cortical regions. Defects in the immune system 4 can also significantly impact mental functioning, leading to the dysfunction of recovery systems and failure to differentiate between safety and danger. These in turn can act as potential causes of PTSD.

These regions have also been found to be smaller in female sufferers 5 who experienced childhood physical and sexual abuse.

People with PTSD can have abnormally high levels of stress hormones 6. While adrenaline prepares our body for a flight or fight response and has immense significance for our survival, its effects can be extreme and overwhelming for a person with PTSD. This is considered one of the primary PTSD causes.

The causes of PTSD may not always be physically discernable. Some of the possible psychological causes of post-traumatic stress disorder have been further discussed below:

Research suggests that a high degree of negative emotions 7 during the experience of trauma can be an important predictor of PTSD.

Peritraumatic dissociation, wherein a person mentally dissociates from reality while experiencing a traumatic event, is another phenomenon closely linked with the development of this disorder.

The way an individual perceives an event is largely dependent on their personality.

Although personality traits cannot exactly be deemed as common causes of PTSD, they can definitely increase the risk of developing the disorder. Certain traits 8 such as neuroticism and anxiety have been positively correlated to PTSD whereas extraversion, optimism, and consciousness have been negatively correlated to it.

Other than the common causes of PTSD discussed above, some other factors that can influence its onset are:

The causes of PTSD in adults are not universal. Different factors can make people vulnerable to developing the disorder. Apart from individual differences, certain cultural factors may also influence how a person responds to trauma and copes with it. Additional to the pre-trauma factors, social support and the absence of other stressors can act as protective factors post the traumatic event.

The inability to recall specific aspects of a traumatic event is one of the main symptoms of PTSD. This is mainly due to the neurocognitive changes 11 that occur due to the sudden experience of trauma.

2. Can bullying cause post-traumatic stress disorder?

Although bullying has not been observed to be one of the main causes of PTSD, it can sometimes lead to it. Going through long-term bullying during childhood can especially be a potential cause of complex PTSD.

3. What is the most common cause of PTSD?

Although PTSD can occur due to a large number of reasons, it is most commonly observed in cases of combat exposure and abuse.