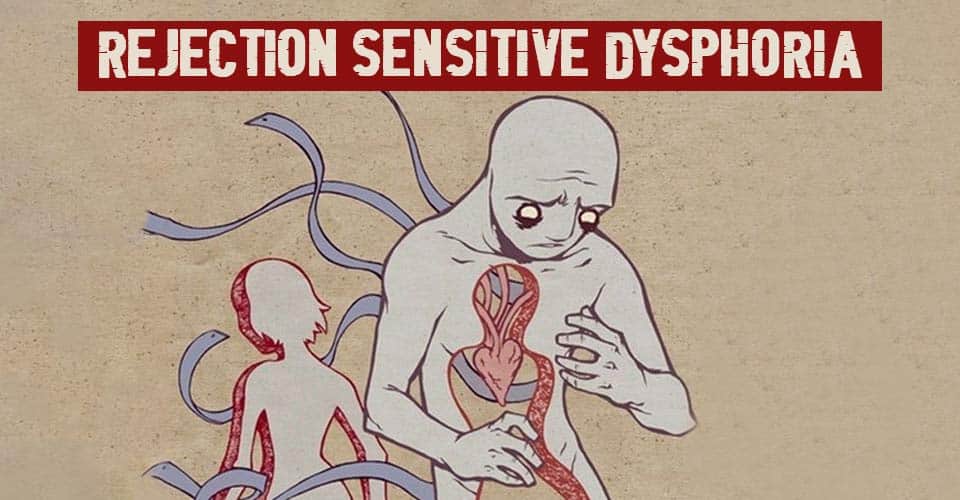 Every individual handles rejection differently. Rejection-sensitive dysphoria is a condition characterized by the failure to handle emotional rejection or pain triggered by the perception. It can also be triggered in case of failure to meet their own high standards or others’ expectations.

What Is Rejection Sensitive Dysphoria (RSD)?

Dysphoria is the Greek word for “difficult to bear”. Rejection Sensitive Dysphoria (RSD) is a condition characterized by hypersensitivity and an extreme vulnerability to rejection. Anyone can be affected by this condition but people with attention deficit hyperactivity disorder (ADHD) and autism are more susceptible to it. People with this condition are more affected by rejection and hurt than any other people. People with RSD often anticipate rejection even when it is not certain. This can make them avoid situations or social settings due to their fear of rejection. It is also often misdiagnosed with social phobia. Physicians misdiagnose this condition with cyclical mood disorder as well due to sudden emotional changes that are associated with it. However, it is found that RSD is a common symptom of ADHD.

Sometimes rejection may turn out to be in our favor. But some people experience rejection more severely than others. People with rejection sensitive dysphoria find it unbearable, restricting, and highly impairing. The fear of rejection makes them go to extreme lengths to avoid a particular situation or people. The symptoms of this condition also include increased irritability, having emotional outbursts, or acting aggressively. They also often look for signs that they are about to be rejected. They respond dramatically to any hint that someone doesn’t want them around.

A 2010 study 1 indicated that heightened concern about the possibility of rejection is implicated in several maladaptive patterns such as becoming hostile, socially withdrawn, or over-accommodating others. There is evidence 2 which claims that rejection sensitivity dysphoria contributes to the self-perpetuating cycle of interpersonal problems and distress due to their constant fear of rejection. Another 1990 study 3 found that people with this condition predict heightened startle responses indicating greater activation of physiological systems in order to prepare for defense against threats. A 1996 scientific review 4 , studied the implications of rejection sensitivity for intimate relationships. It was found that people with RSD tend to anxiously expect, readily perceive, and overreact to it. It also demonstrated that rejection sensitive people and their romantic partners are dissatisfied with their relationships.

People with RSD are extremely sensitive to rejection. Some of the common signs and symptoms include:

There may be certain Rejection Sensitive Dysphoria symptoms that are common with other mental health conditions. They include:

People with this condition tend to overreact due to their fear and expectations of being rejected. Here are some of the factors that influence their behavior:

Individuals suffering from RSD often misinterpret and overreact due to various facial expressions. One study 5 found that individuals with high levels of rejection sensitivity showed changes in brain activity when they saw a face that looked like it may reject them. Researchers found that individuals with this condition showed different brain activity when viewing faces that showed disapproval using functional magnetic resonance imaging (fMRI).
Subjects of the study did not show the same results when looking at individuals who showed anger or disgust.

A 2007 study 6 found that when people with this condition fear that they may be rejected, they tend to experience heightened physiological activity more than individuals without sensitivity towards rejection. They tend to remain extremely alert for more cues that they are about to be rejected and they may even exhibit fight or flight behavior.

Hypersensitivity to rejection often causes individuals to distort and misinterpret the actions of others. For instance, when a friend doesn’t respond to a text message right away, their RSD will provoke thoughts like “they no longer want to be friends with me”. Whereas someone without rejection sensitivity might not be bothered by it thinking that “they are just too busy to reply’. A 2019 study 7 demonstrated specific patterns of disturbances in rejection sensitivity. It was also found that rejection sensitivity and distrust to be a plausible risk for aggressive outbursts.

Attention bias is characterized by individuals who have high levels of rejection sensitivity often pay more attention to rejection or signs that they were rejected. For instance, if an individual invited 10 friends over for a party and 9 friends accepted it and 1 rejected it. They will be more focused on rejection. They may even refer to the party as a total disaster and start to believe that no one likes them. On the other hand, individuals with low sensitivity rejection may view the same circumstances as a success.

A 2018 study 8 found that individuals with this condition are often preoccupied with all types of rejection. This includes both perceived and actual rejection. They also tend to get extremely vigilant while monitoring the moods and behaviors of others. They are overly sensitive to interpersonal problems. People with RSD constantly look for proof of rejection. So even if a friend or partner gives reassurance of love and tells them they are good enough, they may still feel rejected. They may also crave intimate relationships. Yet their fear of rejection can leave them feeling lonely and isolated. It’s important to keep in mind that someone may experience rejection sensitive dysphoria in social situations. However, they may not experience it in other circumstances.

The exact cause of this condition is unknown. However, there may be certain factors that are involved in developing this condition. They include:

Experts believe that there may be genetic factors involved in developing this condition. Rejection Sensitive Dysphoria may be passed down through families. There may be a genetic predisposition or certain personality traits that can increase the likelihood of this disorder. Some experts 9 have even linked rejection with low self-esteem, neuroticism, social anxiety, and an insecure attachment style.

Serious trauma or neglect can be a contributing factor to this condition. Early rejection, neglect, or abuse can trigger the symptoms. For instance, a child being exposed to physical or emotional rejection may increase the likelihood of someone developing the symptoms. Rejection sensitive children tend to behave aggressively. It can also happen that growing up with an emotionally unavailable parent or who is highly critical can have a negative impact on the child. In a study 10 published in Child Development, children who were highly rejected were more likely to angrily expect rejection. They displayed heightened distress following an ambiguous social interaction with a peer.

Children who are bullied or ostracized may grow up with a fear of rejection more than others. Any kind of prior experience with rejection makes an individual go to extreme lengths to avoid experiencing the same pain again. A 1994 study 11 found a substantial link between exposure to family violence in childhood and troubled social relationships. It was found that they had a tendency to expect rejection from social situations as an adult.

Diagnosing this condition is quite challenging. The doctor will conduct a series of tests to rule out any underlying mental health condition. Rejection Sensitive Dysphoria is not categorized under the Diagnostic and Statistical Manual of Mental Disorders (DSM 5). A counselor, psychologist, or mental health professional is usually responsible for the assessment of symptoms in order to arrive at a correct diagnosis. The doctor may also ask several questions about the patient’s family history and the symptoms that the patient is experiencing. Some of the questions that a doctor may ask you can include:

The doctor may also ask questions regarding any prior mental health diagnosis such as autism or attention deficit hyperactivity disorder. The doctor will devise a treatment plan based on the severity of the symptoms.

Since this condition is associated with autism and ADHD, the primary goal of treatment is to treat the underlying conditions. There is no cure for these conditions but therapy and medications can help manage the symptoms. The treatment options are:

Behavioral therapy can reduce the sensitivity towards rejection. This therapy involves understanding and evaluating the thoughts and patterns that govern the negative behavior. In this case, the feelings of rejection and being unable to handle it are the thoughts that are triggering the aggressive behavior. Once evaluated, these negative thoughts are then replaced with positive ones to attain the desired behavior. The doctor may also help to develop coping strategies in order to ease the symptoms. In this therapy session, the patient will also learn how to handle difficult situations, resolve relationship conflicts, improve communication, and overcome emotional trauma or abuse.

A 2018 study 12 found cognitive behavioral therapy more effective in treating patients with ADHD and hypersensitivity towards rejection. It was also found that a reduction in the core symptoms of ADHD was fairly consistent.

There are no Food and Drug Administration (FDA) approved medications for this disorder. However, the doctor may prescribe some medications to ease the symptoms associated with it. They may prescribe Guanfacine 13 , which is a common medication for Rejection Sensitive Dysphoria. It is usually prescribed to lower blood pressure but it also interacts with the receptors of the brain thus reducing hyperactivity and emotional responses. A 2008 study 14 found that Guanfacine was an efficient medication for management of youth with ADHD. It also demonstrated a reduction in ADHD symptoms including rejection sensitivity associated with it.

Along with therapy and medication, certain lifestyle changes can help to ease the symptoms. For instance, keeping your emotions in check and understanding the feelings that are triggering your behavior. Understanding what you feel to be rejection or criticism may not actually be true.

It may be challenging to control feelings. But it may be wise to stay calm and discuss your feelings rationally rather than having an outburst. It will also help you to reduce the stress levels when you deal with the situations calmly. One 2017 study 15 indicated that mindfulness based interventions were effective in treating disorders characterized by rejection sensitivity. Some of the other practices that you can try are:

It is absolutely normal to have good and bad days and sometimes sudden outbursts when things don’t go a certain way. However, it is important to consult a doctor when things start to overwhelm you and the outbursts are more frequent when you feel rejected or hurt. Medical attention becomes necessary when this condition starts to impact the quality of your life. It can interfere with your relationships, career, or life that can ultimately lead to anxiety or depression. Conditions can worsen, if it is left untreated. However, it is possible to manage the symptoms with therapy and medication. Following the devised treatment plan can help you to lead a healthy life.

Rejection Sensitive Dysphoria At A Glance