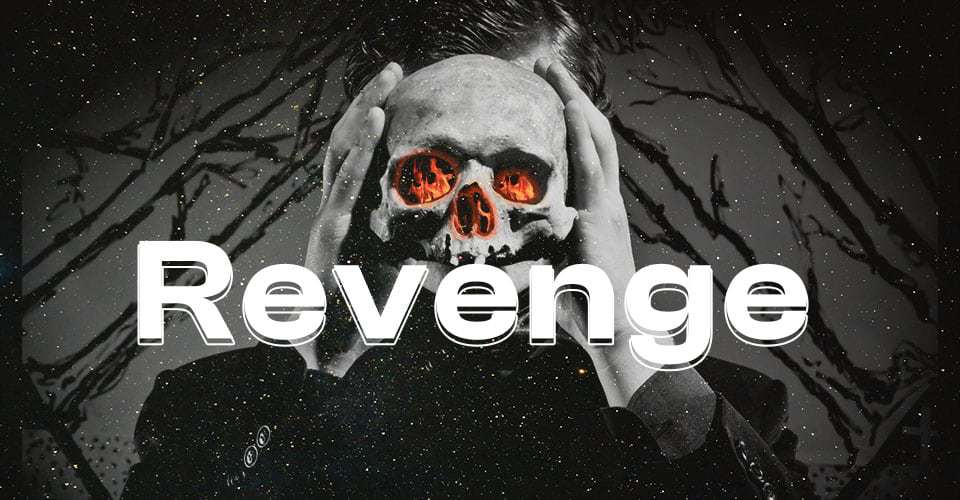 Revenge refers to the act or process of punishing someone or inflicting harm or injury to someone in response to wrongdoing that they committed. The grievance can be real as well as perceived also.

The action of revenge or vengeance is a process in which individuals respond to wrongdoing by harming the wrongdoer or transgressor. It is considered as a “sweet and retaliatory aggression” motivated by hedonic rewards, according to research 1 . This emotion is often described as a desire to inflict retribution also. A 2010 study 2 defines it as both an action and a desire. “Revenge can also refer to the urge to pay back wrongs; thus, a person can have ‘revenge in his heart.”, added the researchers. This study differentiates vengeance from people’s general emotions such as aggression, defiance, anger, and resentment for two primary reasons.

A 2014 study 3 claims that exposure to incidental power often increases vengeance among chronically powerless individuals. Retribution is less easily differentiated from punishment which refers to a penalty inflicted for wrongdoing. Meanwhile, several studies 4 argue that revenge and punishment are not similar regarding their respective goals. Vengeance is usually motivated by a yearning to witness the wrongdoer suffer. An act of punishment is motivated by a desire to improve the wrongdoer’s future behavior. Unlike vengeance, punishment does not include any kind of anger. There are certain significant aspects of vengeance that resemble the concept of justice, though vengeance involves more injurious, rather than harmonious, goals. According to a 2015 research paper 5 , vengeance is self-focused and vengeful responses include more of the behaviors that induce a self-threat.

Revenge is considered a label that is assigned based on the perceiver’s attribution. It is an inference even though the individual making the inference is the wrongdoer themselves, the victim party, or outsiders. In some instances, it is also possible that certain individuals can disagree whether the action is revenge or not.

The Psychology Of Revenge

Vengeance or retaliation is an emotional and, mostly, harmful response to injustice. A recent 2020 study 6 explains “Individuals pursue revenge as perceived rewarding events, in which there exists a belief that the act of revenge will be satisfying or pleasurable.” Certain important neurological factors play different roles in the brain when someone reaps revenge. A 2015 study examined a few participants who were harmed by others. When given a chance to punish or take revenge on the wrongdoers, the victims contemplated their vengeance. Researchers noticed a rush of neural activities in the caudate nucleus of their brain. The caudate nucleus refers to a part of the brain known to process rewards.

Most people consider an exacting vengeance as a form of emotional release that helps us to feel better. However, getting retribution has several negative impacts that can cause physical and psychological distress. The human brain may feel the first few moments as rewarding, but revenge prolongs the unpleasantness of the original wrongdoing. Research 7 explains that it often creates a cycle of retaliation instead of delivering justice. The study shows that an act of revenge may make the victims focus on and think deeply about both the wrongdoer and the wrongdoing. Vengeance triggers and aggravates one’s emotional wounds as one might end up punishing themselves emotionally while taking revenge.

Why Some People Are More Vengeful

Some people are not inclined to vengeance, while others tend to be much more inclined. There are certain human emotions, such as anger, that trigger the possibility of revenge. People who are extremely concerned about their reputation tend to be more vengeful if their honor has been unfairly challenged or disputed. A 2016 research paper 8 explains the link between revenge and narcissism. This study shows that a narcissist’s social confidence and sense of entitlement develop a desire to retaliate against the wrongdoers. It also suggests that narcissism is closely associated with provoked aggression that can be often observed in childhood or adolescence. However, narcissistic individuals can use every resource and means that are available to them in order to exact vengeance.

Several researchers have argued that revenge offers certain personal and societal advantages. A recent 2020 study. Revenge is sweet: Investigation of the effects of Approach-Motivated anger on the RewP in the motivated anger delay (MAD) paradigm. Human brain mapping, 41(17), 5032–5056. https://doi.org/10.1002/hbm.25177 )) says that the reward center of our brain known as the caudate nucleus transmits a pleasurable feeling to our body after we meet our vengeance goals. This process helps us to shift our focus from the transgressor and their wrongdoing and makes us feel emotionally pleased. Another study 9 mentions three important adaptive functions that healthy revenge serves. The functions include:

When vengeance is used to restore justice, it may offer several psychological benefits. We usually feel distressed when treated unfairly and retaliation helps us to reduce our distress by restoring equity with the wrongdoer.

Forgiveness and revenge are two extremely important emotions that play different roles in the minds of the human psyche. Researchers 10 define forgiveness as “a victim’s replacing ill will toward the wrongdoer with goodwill or as the reducing of negative thoughts, emotions, and behaviors and replacing these with positive thoughts, emotions, and behaviors toward the offender.” It is very difficult to forgive an individual who has caused immense pain or damage. In a world full of hate and vengeance, many people have broken their cords of love and friendship due to a lack of forgiveness in their hearts. Forgiveness and retaliation both come from the inner space of the human mind. It is a matter of choice that allows one to decide for themselves.

The desire to take revenge comes from human emotions where people feel betrayed, hurt, resentment, or angry. When a person has been at the receiving end of injustice, an act of vengeance plays the role of an immediate justice to self. The pleasure of witnessing the transgressor suffer provides a kind of temporary satisfaction to the victim. A 2019 research 11 explains the association between forgiveness and vengeance with several psychological symptoms. It shows that the desire for retaliation followed by chronic depression is very common among psychologically abused women, while forgiveness strengthens the psychological health of those women.

Meanwhile, an act of forgiveness comes from compassion towards others. By forgiving the wrongdoer, one can eliminate the hatred, resentment, and other negative feelings from their mind. Studies 12 have found that forgiveness is capable of lessening the psychological stress responses and superior health outcomes. The human body and soul experiences a sense of freedom and release from emotional pain and suffering, while many people end up damaging themselves during the process of taking revenge. Though the desire for retaliation, anger, and resentment, are more natural than forgiveness, one should choose the empowering and satisfying path of forgiveness.

One might feel the urge to cause the wrongdoers distress in return when feeling betrayed or hurt. But the process of taking revenge may cause certain negative consequences, such as:

1. It can make you feel worse

Vengeance seems like a logical and inevitable reaction. One might feel that taking revenge will provide great relief from the suffering. In reality, people who seek revenge feel worse in the long run as they fail to eliminate their stress and other negative feelings. One should channel their energy into moving forward in life.

2. It wastes your time

One might spend most of their time thinking about how they will take revenge and make the wrongdoer suffer. Instead of involving any health benefits, it would waste an individual’s precious time that they can use for some positive activities.

3. It catches you in an endless revenge loop

While seeking revenge on the wrongdoers, one might involve themselves in an endless vengeance loop. It is extremely difficult to come out from such permanent distress as the cycle continues forever. Make sure that you don’t get involved in such a cycle that not only strengthens your negative energy but also can cause you severe psychological stress and anxiety.

4. It won’t change the transgression

It is a fact that vengeance cannot undo wrongdoing or injustice. Taking revenge may feel satisfying for a short period, but it will ultimately cause you numerous disadvantages.

5. It can cause worse situations

One should think once about the repercussions of their retaliation. People often end up troubling themselves or someone close to them during the process of vengeance. Forgiving the transgressor can save you from the possibility of further trauma.

6. It affects psychological and physical well-being

Vengeance is considered inherently unhealthy as it affects one’s psychological and physical health including increased heart rate, high blood pressure level, depression, anxiety, stress, and anger issues. Feelings of revenge are associated with intrusion and hyperarousal. There are certain psychological disorders associated with the act of vengeance such as:

Eliminate Revenge By Learning To Forgive

Revenge is a natural human emotion that allows one to cause damage to the wrongdoer or to punish the transgressor. When feeling betrayed or hurt, one may respond to injustice by retaliating to the wrong. It might satisfy the victim after witnessing the wrongdoer suffer, but it causes several physical and psychological distress. Revenge is considered an aggressive act that makes the victims worry and ruminate much of the time. It tends to increase self-criticism, cause problems in setting future goals and create barriers in achieving success. If any injustice happens, one should learn to forgive as forgiveness helps to eliminate negative feelings and release the human body from further emotional suffering.

Revenge At A Glance