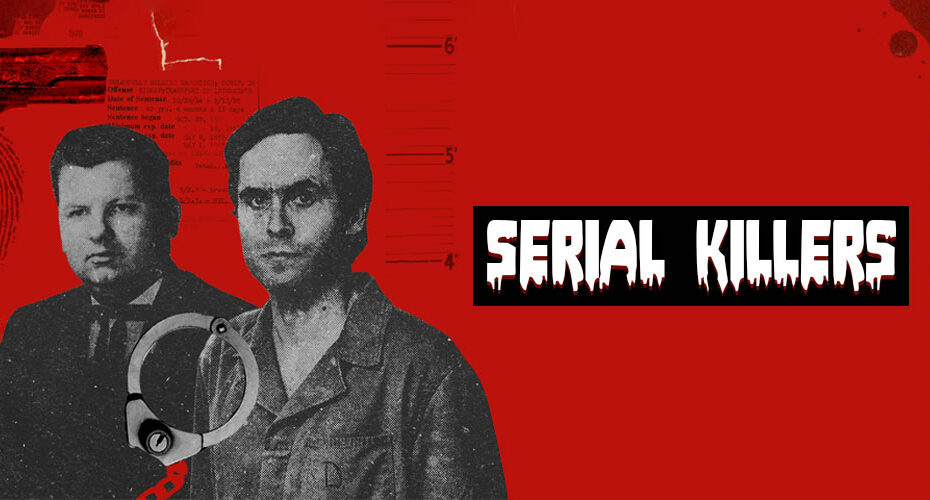 Serial killers are criminals who commit three or more murders over a considerable period of time, for psychological and psychopathic gratification.

Who Is A Serial Killer?

A serial killer is a type of multicide perpetrator who kills three or more people over a long period of time 1. Modern criminology explains that serial killers display amplified traits of psychopathy 2, exhibiting

What Is Serial Killing?

Serial killing or serial homicide is a premeditated, consciously perpetrated, voluntary act of violence directed to cause harm or loss of life.

According to a 2020 study 3, serial killing or serial homicide is an all-inclusive term for the “unlawful killing of two or more victims in separate events”. The threshold number of murders 4 in a serial killing range from 3 to 5 but is never less than two.

Serial killers typically won’t stop until they have been killed or caught by law enforcement. In most cases, they follow a pattern 5 with respect to their type of victims, killing methods, killing frequency, etc

Serial killing is often confused with other types of multicide 3 like mass murder, spree-killing, or contract killing. However, despite the conceptual similarities, the acts are essentially different—distinguished by factors 6 like:

For instance, mass murder is four or more murders occurring at one event without any distinctive time lapse between them. On the other hand, spree-killing is any murder that occurs at two or more locations with no emotional cooling-off period in-between.

In contrast, the sure signs of a serial killer comprise murdering three or more people, with cooling-off periods in-between, over a lengthy stretch of time.

The Psychology Behind Serial Killing

A question that intrigues most people is: How do serial killers think? What makes them kill?

In a majority of cases, crime experts attribute this psychopathy to harrowing developmental experiences 3 and mental deterioration . Such experiences hark back to:

More often than not, serial killers act on motives 7 drawn from:

Irrespective of the motive, all serial killers operate on one base reason: killing for the act of killing itself. Often victims are chosen randomly; at other times, they choose their victims based on their fantasy of the “ideal victim” and certain social reservations based on race, gender, physical characteristics, etc.

Most serial killers, during trial, have been medically evaluated and popularly speculated to be suffering from serious mental health conditions. However, even if serial killers are considered mentally unstable 9, they are not adjudicated as such under the law.

Traits Of A Serial Killer

The time-tested Macdonald triad, 10 formulated in 1963 by the renowned psychiatrist J. M. Macdonald is still used in modern times to predict or detect violent criminal tendencies, especially those associated with serial homicide.

According to this triad of sociopathy, the telling signs of a ‘born’ serial killer 11 are already present in childhood. These involve:

However, the Macdonald triad has seen much flexibility and elaboration in recent years, thanks to rigorous in-field practices in criminology and forensic studies. Recent research 12 throws light on the characteristics of a serial killer, which include:

A lot of serial killers are also diagnosed with mental health conditions, such as:

Based on their ‘human’ characteristics, serial killers are primarily distinguished into two major types 13:

Organized killers are meticulous in planning and executing their murders. They plan out every detail of their crime in advance and take caution to not leave behind any incriminating evidence.

These killers handpick their victims according to their obsessions or fancy. They are also more likely to engage in fetishism, partialism, necrophilia, or human trophy collection. It is found that most organized serial killing cases around the globe concern children, young women, homosexual men, couples, etc.

Unorganized killers do not plan out their crimes beforehand and are haphazard in their execution. Most often, they have deep-seated mental illnesses that trigger their homicidal behavior.

These killers, in the absence of thorough planning, randomly select their crime spots; but, even then, they target a select social group.

Organized and unorganized killers can, in turn, be distinguished into several types based on their motives for serial homicide 13. These include:

A visionary serial killer operates to satisfy their personal visions. These visions are more or less grandiose (larger than life) delusions of an unstable mind associated with religious beliefs, ritualistic practices, and participation in the occult.

Examples of this type of killer include Herbert Mullin and Richard Chase who murdered people in the 1970s as blood sacrifices.

Mission-oriented serial killers kill to “rid” society of a specific group of people. These killers are mostly linked to racist, religious, and ethical extremism.

Examples of mission-oriented serial killers include Joseph Paul Franklin who targetted Jews, Blacks, and interracial couples, during 1977–80, in America.

A hedonistic serial killer is a homicide perpetrator who thrives on hedonism and kills for pleasure. This type of serial killer is usually driven by the “thrill of the kill”, sex, or money.

Hedonistic killers can further be divided into three types:

A thrill killer kills for the pleasure of killing and satisfying their adrenaline rush through stalking, death threats, break-ins, etc. A good example is Robert Hansen who stalked and murdered at least seventeen women in Alaska in the years 1980–83.

A gain or comfort killer is a serial killer who kills for “profit” aka monetary or material gains. A good example is Dr. Henry Howard Holmes, a comfort killer who operated in Chicago during the late nineteenth century.

A power or control serial killer is someone who seeks to gain power and control over their victims. Their most common expressions of power are organized sexual domination, torture, mutilation, and ‘trophy collection’ of human body parts. Such grotesque collections, according to experts, serve to empower the perpetrators.

The Zodiac Killer, who terrorized the San Francisco Bay Area, the US, in the 1960s is a good example of killers seeking power and control.

Serial killers and serial killings are the subjects of never-ending fascination, urban legends, and paraphilia. The seamless crime documentaries and debates show how fascinated people are by the grotesque murder methods, the twisted psychology of the perpetrators, the techniques to avoid detection, and subsequent incarceration, trial, and punishment.

Nonetheless, most serial killing cases have witnessed extreme media frenzy and stereotypical representations and, over the years, have accumulated a substantial body of myths and false, exaggerated notions.

Some of the most common serial killer myths include:

1. All serial killers are men.

2. All serial killers have an above-average IQ.

3. All serial killers are motivated by sex.

It is a popular notion that all serial killings are lust killings. This is a predominant generalization, as serial homicide is motivated by several causes (such as material gains, visions, the thrill of adventure, etc.)

It is widely believed that serial killers do not stop until they have been killed or caught by law enforcement. In some cases (like the Zodiac Killer), the killer stops on their own accord without any incarceration or death sentence.

Criminal psychology always strives to locate the motive of serial killings in the murky minds of the perpetrators. Experts try to signal out certain mental disorders—like schizophrenia, ADHD, psychosis, antisocial personality, and narcissistic disorders—that appear to contribute to the killing spree and associated wicked acts.

They have tried to trace and recognize the source of such mental health conditions, like childhood abuse, trauma, parental violence, bullying, etc. Hence, more often than not, people consider serial killers as “social casualties”. They fail to see that serial killers mostly kill for the sake of killing itself.

6. All serial killers want to get caught.

Many people think serial killers, who are too knee-deep in crime, get deranged and long to be discovered so as to put an end to their killing spree. However, as case studies show, all criminals do not long to be caught. They take extreme care to escape the consequences of their actions and that is why when they get caught—it is usually by accident.

Some of the worst serial killers in history include:

The foremost modern and most notorious serial killer in history, the anonymous “Jack The Ripper” operated in Victorian London, in the 1880s. He raped, murdered, and mutilated at least 5 prostitutes and is the subject of an unending stream of urban legends.

Perhaps the most notorious of male serial killers, Theodore “Ted” Bundy was charged with lust serial killing of at least 30 women, across 5 American states, between 1973 and 1978. In prison, he was diagnosed with antisocial personality disorder and mania as he exhibited different appearances, signatures, names, and criminal methods at different times.

The most famous female serial killer, Vera Renczi or “The Black Widow” was a Romanian serial killer who killed 35 men by arsenic poisoning. Her victims included her husbands, her lovers, and her children.
Other notable mentions

Other Notable Mentions Of Serial Killers Include:

More often than not, what we know of serial killers are products of colorful storylines and headlines. These were directed to create “larger than life” socially constructed “celebrity monsters” who reduced the severity of their criminal actions into stylish “wickedness” and piqued newspaper sales.

Nonetheless, this “wickedness”—time and again—poses significant investigative challenges to law enforcement, not to mention attracting an over-abundance of attention from the media, mental health experts, academia, and the general public.

1. What are some best movies about serial killers?

Psycho, Last Night In Soho, Henry: Portrait of a Serial Killer, The Texas Chain Saw Massacre, Zodiac, and The Silence of the Lambs, are some well known movies about serial killers.

2. Is serial killing a mental illness?

While serial killers are linked to a bevy of mental disorders during the trial, most of them are not adjudicated as insane under the law. The tendency of serial killing may have its origin in mental health conditions in some criminals, but serial killing in itself is not a mental illness.

3. Are all serial killers psychopaths?

4. Do serial killers love their families?

Case studies show that serial killers exhibit protective and loving behavior towards their own families, even when they are killing other people. They usually lack basic humanistic and social values like empathy, respect for life, guilt, etc., and put on a superficial mask of humanity as they go on with their criminal activity.

5. How do serial killers select their victims?

Serial killers select their victims based on their fantasy of the “ideal victim” and certain social reservations based on race, gender, physical characteristics, etc.

6. Who are some famous serial killers with bipolar disorder?