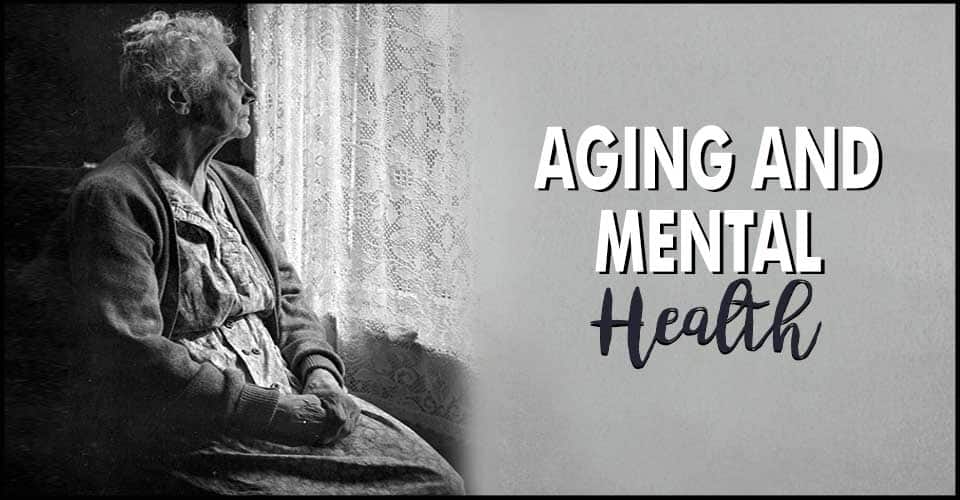 Aging is an essential and inevitable part of life. It is an unavoidable human process of growing older through the lapse of time. Sometimes it interferes with our mental health during the process that can pose a range of challenges for the individual.

Aging can be a scary thing. Feeling anxious about being alone as you age or the changes in your physical and mental health is quite common. Normalizing the aging process and realizing that everyone else is also aging can go a long way in stabilizing the mental health concerns associated with this phenomenon.

Aging is a natural process. As an individual grows older, forgetfulness becomes a part of life. However, if it is persistent, it is important to pay attention to the signs in order to begin the treatment process. Some of the signs of mental illness in older adults are as follows:

Although aging can cause stress in older people, normal emotional ups and downs may feel challenging to deal with. Some of the risk factors that increases the risk of developing mental health conditions are as follows:

Dementia is a condition characterized by a deterioration in thinking, behavior, and memory. It is a progressive syndrome often associated with aging. According to research 3 , dementia is described as a clinical diagnosis involving “an overall decline in memory and other thinking skills severe enough to reduce a person’s ability to perform everyday activities.” Although some degree of memory weakness is normal in older age, the term dementia is usually used to denote memory decline and forgetfulness in this age group. A 2016 study 4 pointed out that normal aging involves many cognitive changes including variations in memory, executive function, reasoning, spatial abilities, attention, and language abilities. A 2015 study 5 found that an estimated 1.3% of the entire UK population or 7.1% of those aged 65 or above, have dementia.

Since the symptoms start to appear gradually, the cognitive decline often goes unnoticed. Often these forgetful behaviors are mistaken as part of the aging process. Some of the signs of this condition can include:

Even with such challenges with aging, it is possible to prevent dementia. Adopting certain lifestyle changes can improve cognitive health. Some of them include:

Although depression is a common mood disorder, it is not a part of the aging process. Depression is a condition characterized by a persistent feeling of sadness lasting more than two weeks that interferes with the day-to-day functioning of the individual. Studies 6 have shown that most older adults lead fulfilling lives despite having illnesses or physical problems. A 2001 study 7 found that among inpatients and outpatients in a geriatric mood disorder unit, 52% were found to be with the first onset at age 60 or older. Another 2001 report 8 also pointed out that older adults with late-onset depression are more likely to have vascular risk factors including cerebrovascular disease.

The first step towards recovery is recognizing the problem. Treatment is possible with therapy and medications. Some of the treatment options include:

Some lifestyle changes may also help in preventing depression. They include:

Anxiety disorders are not a normal part of the aging process. Anxiety is a condition characterized by elevated amounts of stress, worry, or fear that ultimately interfere with the day-to-day functioning of the individual. This disorder impairs the quality of life and may increase the risk for developing other serious conditions such as depression, dementia, or heart disease. Sometimes the anxiety symptoms go unnoticed in older adults since it develops gradually. Research suggests that at least 4% of older adults are affected by anxiety.

Adults more than 60 years of age are more likely to experience physical symptoms of anxiety. Some of these signs include:

Some of the risk factors of developing anxiety in old age are:

Treatment for aging-related anxiety is a combination of medication and therapy. Some of the treatment methods are as follows:

It is possible to treat anxiety once it’s diagnosed. Numerous reports 9 found that chronic anxiety is detrimental to the cognitive and psychological health of older adults. Certain lifestyle changes can also help the patient to manage the symptoms. Reports have shown efficacy in adopting these major lifestyle changes in managing anxiety symptoms. Some of the options include:

Bipolar disorder is a condition characterized by extreme mood swings and high levels of energy. A 2015 report 15 found that almost 25% of people with bipolar disorder are at least 60 years old.

Some of the symptoms of bipolar disorder in older adults are as follows:

An older adult above 60 who is suspected of bipolar disorder requires a full medical workup that includes past conditions, medical and family history. It is essential to pay special attention while treating older adults with bipolar disorders. Aging-related bipolar disorder 16 can be challenging to manage. Older adults may metabolize or tolerate medications differently than younger adults. Treatment is complicated, particularly for this age group, since doctors need to evaluate drug interactions consumed by the patient.

Some of the treatment methods for bipolar disorder in older adults are:

Obsessive compulsive disorder is a condition characterized by recurrent obsessive thoughts, ideas, or sensations that make them feel driven to compulsions. When these compulsions become severe, they may interfere with the day-to-day life of the individual. For instance, if an older adult is obsessed with being contaminated with dirt or germs, they may wash their hands more frequently than necessary. A 2009 study 17 found that older adults with OCD were more likely to be men compared to those having anxiety disorders or mood disorders.

Some of the signs of OCD are:

In case you are experiencing signs of OCD, there are several measures you can take to manage the urge or compulsion. They are as follows:

Experts believe that people with PTSD may be at risk of accelerated aging. Post-traumatic stress disorder is a condition that is triggered by a traumatic or terrifying event. Some of the symptoms of this condition are:

Some of the treatment methods for this condition are as follows:

Identifying the key symptoms of mental health disorders is the first step towards recovery. Identification will help to develop a treatment plan to manage the symptoms of the conditions. Medication, therapy, and lifestyle changes can be very effective in treating patients with aging-related mental health disorders. This will allow them to cope and improve their quality of life.