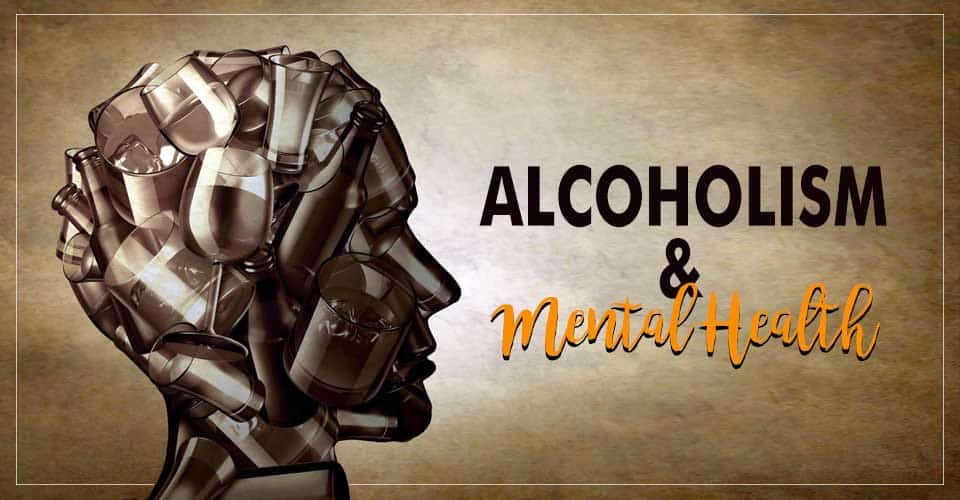 Regular alcohol intake interferes with the intricate workings of the brain. It reduces a person’s ability to think clearly. Alcoholism puts us at a greater risk of experiencing various psychological, interpersonal, and social problems. It severely affects our mental health when left unchecked.

Effects Of Alcoholism On Mental Health

Alcoholism is a chronic condition characterized by consuming alcohol and a lack of control over consumption that can significantly impact the physical and mental well-being of the individual. Alcoholism can be defined as an addiction to alcohol. Excess alcohol consumption can damage the organs but it particularly affects the brain, liver, heart, pancreas, and immune system.

There may be several reasons why individuals may resort to alcoholism. For most people, it usually works as an escape mechanism from painful emotions or psychological conditions such as stress, anxiety, or depression. Some of these reasons can include:

However, studies 1 found that there are two main categories of motivation to drink alcohol. They are:

This motive is often labeled as “drinking to cope”. It is defined as a tendency to use alcohol to escape, avoid or regulate unpleasant emotions.

This motive is labeled as “drinking to be sociable”. It can be defined as a tendency to drink to celebrate social occasions or to have a good time with other people.

Mental health and alcoholism are closely related because it is usually used with a “personal effect motive”. Many researchers 2 have found that drinking alcohol to cope with problems is more likely to lead to abusive drinking than social drinking. There is also evidence 3 that suggests that both social and coping motives for consuming alcohol can lead to heavy drinking.

A 2012 study 4 defines stress as “a physical, chemical or emotional factor to which an individual fails to make a satisfactory adaptation and which causes physiologic tensions that may be a contributing cause of disease”. The human body attempts to maintain a state called homeostasis via the nervous and endocrine systems as a way to manage and cope with stress. Homeostasis is a state wherein the human body develops a complex and extensive process of adapting to harmful or dangerous situations that trigger stress to maintain a physiological balance.

Stress may be one of the triggers for resorting to alcohol for comfort. People who experience a lot of stressful situations often turn to alcohol as a way of coping with stress. Research suggests that alcohol can have a significant impact on the psychological and physiological aspects of the body and may also further increase the stress levels of the individual. Alcoholism has a unique ability to both relieve stress and to be a cause of it. Alcohol consumption may be successful in providing some relief and relaxation in the short run. But in the long run, heavy consumption can have dire consequences. It can even lead to medical and psychological problems. The individual may also be at an increased risk of developing alcohol abuse disorder. One 2012 study reported that men and women who experience high levels of stress tend to drink more.

Our brain constantly tries to maintain the psychological balance but when alcohol is consumed, it tends to interfere with the intricate workings of the brain. Excess consumption of alcohol produces high levels of cortisol in the brain that tends to alter the brain chemistry. This ultimately interferes with the hormonal balance in the brain which changes the way the body perceives and handles stress. Alcohol doesn’t allow the brain to return to its ideal balance, thus forcing it to create a new point of physiological functioning called allostasis 5 . Excess alcohol consumption can also deplete the serotonin levels in the brain, the chemical that is responsible for regulating your mood. When the serotonin levels fall, negative emotions such as anger, aggression, stress, or anxiety can start to take over. Hence, every time an individual drinks, they have an accumulative effect on the brain as the serotonin level falls. Thus, alcohol worsens your mood and stress levels rather than improving it

Depression is a mood disorder characterized by persistent feelings of sadness that can interfere with the day-to-day functioning of the individual. A 2004 study 6 suggested that alcoholism and depression are often found to co-occur. Another 2003 study 7 found that the lifetime prevalence of alcoholism in those individuals with major depressive disorder ranges from 27% to 40% across epidemiological studies in the USA. Recovery from depression and alcoholism are also interlinked. Hence, seeking treatment for both alcoholism and depression can accelerate the recovery process.

For people with depression, alcohol works as an escape agent to numb the emotions they constantly feel. The sudden flow of hormones in the brain after alcohol consumption may provide some relief to the symptoms. However, drinking alcohol is found to worsen the symptoms of depression. A 2016 study 8 suggests that individuals with mental health conditions are more likely to use alcohol as a form of treatment. Another 2014 study 9 also found that women with depression are more likely to engage in binge drinking. Nearly one-third of people with depression also have an alcohol problem. A 1997 study 10 found that the use of alcohol to relieve depressive symptoms and the development of depressive symptoms as a result of the social and biological consequences of alcoholism are interlinked.

Usually, depression occurs first, followed by a drinking problem. People with depression are more likely to experience severe depressive episodes due to excessive alcohol consumption. In such extreme cases, antidepressants are also found to be less effective.

Alcoholism And Other Conditions

A 2010 study 11 found that almost 40% of people undergoing treatment for alcohol abuse reported at least one suicide attempt in their lifetime. Individuals with alcohol abuse disorder are also found to experience memory issues. A report found a prevalence rate ranging from 10 to 24% for dementia among alcohol abusers. When an individual drinks alcohol, they may experience the initial feelings of relaxation in the brain. However, when someone drinks to mask their anxiety or suicidal thoughts, the chemical reaction in the brain triggers it even further. This can make the individual become more reliant on alcohol for relaxation. When we process alcohol, the individual begins to experience psychological symptoms, such as anxiety, or depression. The effects of the hangover tend to make the symptoms worse. The feelings of anxiety get triggered after the hangover. A 2012 study 12 suggested that people with anxiety disorders are more likely to become psychologically dependent on alcohol because they use it to self-medicate.

A systematic review in 2014 13 reported that the prevalence of alcohol abuse among those with PTSD ranges from 9.8% to 61.3%. PTSD and alcoholism often share a common genetic vulnerability that can be accounted for their co-occurrence. To ease the symptoms of these conditions a person can opt for relaxation methods, such as meditation or yoga. It may also be beneficial to seek professional assistance in order to diagnose and treat the conditions associated with alcoholism.

Alcohol may have short-term effects on our mood and may even improve our mood for a short span of time. However regular consumption of alcohol can have lasting effects on the individual’s mental and physical health. It may not hurt someone to consume alcohol with a “social effect motive”. Occasional drinking with friends or in social celebrations is acceptable. However, if someone uses alcohol to get through the day or to cope with depression then it may become a serious issue.

The risk of developing a range of serious mental and physical health problems increases the more a person drinks on a regular basis. It can also make the existing conditions worse. In case you find your underlying mental conditions worsening, it is essential to seek professional help and devise a treatment plan. Following a treatment plan for alcoholism and the associated mental health conditions can enable you to lead a quality life.