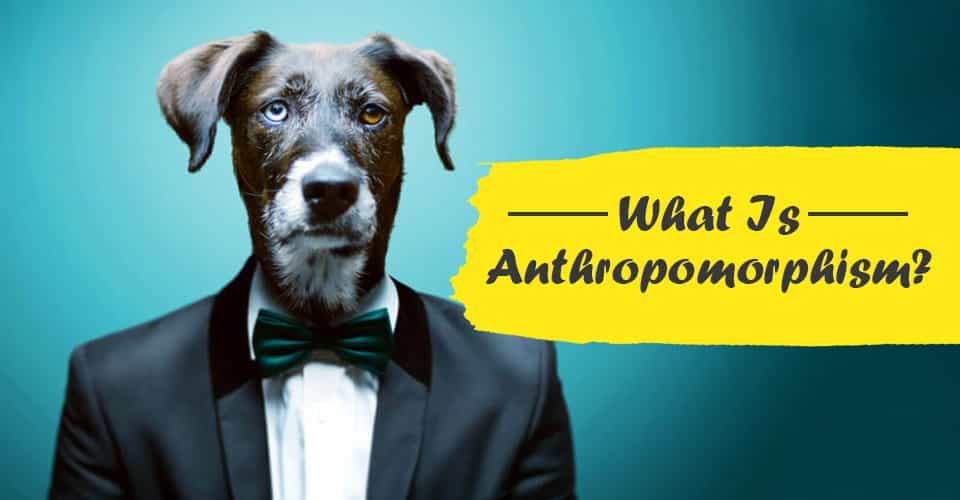 Anthropomorphism is the phenomenon of attributing human emotions or behavior to non-human entities, including animals. It is a very common way of interacting or communicating with the world.

Anthropomorphism is a phenomenon characterized by the intentional or unintentional attribution of emotions and behaviours to living and non-living entities. Some people assign human emotions to animals such as cats or dogs and perceive them as a pseudo-human. People also anthropomorphize unseen beings i.e God as possessing human features. The term is derived from the Greek word “Anthropos” meaning “human” and “morphe” meaning “form”. A 2010 study 1 defines anthropomorphism as “a human characteristic to assign human emotion and behaviour to other living creatures.”

Personification is also often found in abstract concepts such as nations, emotions, or even natural forces (seasons or weather). Most cultures have traditional fables that anthropomorphized animals as characters as a way of storytelling. Attributing human characteristics or behavior to a God, animal, or object is found to be a typical human tendency in all aspects of life. Some people tend to anthropomorphize more than others.

Xenophanes, a Greek philosopher first used the term to describe how Gods and other supernatural agents tended to bear a striking physical resemblance to their believers. He described that anthropomorphizing can be done in two distinct ways. The first way involves attributing human-like physical features such as hands or face to non-human objects. The second way involves attributing a human-like mind to non-humans i.e intentions, awareness, or emotions. A 2007 scientific review 2 pointed out that the presence of mental states constitutes both a necessary and sufficient condition for humanness since the presence of a human-like face or body movement generally implies the presence of a human-like mental state as well.

One of the most notable criticisms began in the 1600s when Francis Bacon pointed out that everything behaves as it does in order to achieve some end, or in order to fulfill itself. He stated that achieving end goals is a human activity and attributing it to nature misconstrues it as human-like.

Why People Resort To Anthropomorphism?

It is a common human behavior of attributing emotions to living or non-living things as a way of making sense of how the world works. They tend to try to make sense of the events they encounter in life. People in some cultures tend to attribute human characteristics to deities, which often include jealousy, pride, and love. Some individuals may explain threatening natural events like fires or thunderstorms in anthropomorphic terms. It is a way of humans making sense of how the universe and its entities work. Experts believe that some people tend to see pets as humans in a way of fulfilling their social needs. A 2018 study 3 suggests that some people who are lonely or are sensitive about social relationships are more inclined to attribute human emotions and behaviors to their pets. The study explains that “anthropomorphism is a basic human attitude that begins in infants and persists throughout life. The difference between adults and children is not qualitative but rather a matter of complexity.”

Anthropomorphism can also cause misunderstandings since the human tendency of reading animal behavior as “human-like” can often be misinterpreted. Some people tend to exaggerate the similarities between humans and animals or even project their own personality traits on their pets. There is no scientific evidence that suggests that “smarter people are more inclined to talk to their pets”.

Some people tend to see or draw faces in objects such as the moon’s surface or clouds or in certain foods. This phenomenon is known as pareidolia. This phenomenon can explain why human brains tend to register “faces” even though the clouds or pizza doesn’t resemble one. This occurs in an attempt to fulfil themselves since objects lack the human emotions that an individual may crave.

Anthropomorphism In Religion And Mythology

In the case of religion and mythology, anthropomorphism is practiced in divine beings perceived in human forms, having extraordinary capabilities that humans don’t possess. These divine beings not only resemble humans, but they are also used to explain natural phenomena, creation, and historic events. Some people even refer to this as “divine intervention”. In Anthropomorphized versions, the deities fell in love, got married, had children, fought battles, wielded weapons, and displayed all human characteristics. Some deities also represent certain emotions such as love, war, beauty, or fertility. Anthropomorphic deities also displayed human emotions such as greed, shame, anger, jealousy, love, forgiveness, or wisdom.

Greek deities, Zeus, and Apollo were also depicted as humans who exhibited commendable and despicable human qualities. This is known as theomorphism or giving of divine qualities to humans. Some religions 4 believe in theomorphism while others such as Judaism or Islam do not believe in an anthropomorphic deity. They believe that God is beyond human comprehension. Hindus, on the other hand, do not reject the concept of deity since they believe that people need to believe with their senses.

Anthropomorphism in science suggesting that animals have intentions and emotions has been deprecated due to its lack of objectivity. Experts 5 have been warned to avoid the assumption that animals share any mental, social, or emotional capabilities as humans. They are also advised to strictly rely on observational evidence rather than assumptions. In 1927, Ian Pavlov, a Russian Empire, and Soviet physiologist pointed out that animals should be considered “without any need to resort to fantastic speculations as to the existence of any possible subjective states”. In 1986, the Oxford Companion to Animal Behaviour advised that “one is well advised to study the behaviour rather than attempting to get any underlying emotion”

The study of great apes in their own environment and in captivity has greatly impacted the attitude towards Anthropomorphism. In the 1960s, Jane Goodall, an anthropologist, studied 6 chimpanzees, Dian Fossey, a conservationist, studied gorillas and Birute Galdikas studied orangutans were all accused of the “worst of the ethological sins-anthropomorphism”. In recent times, it is more widely accepted that empathy has a crucial role to play in research. However, some experts believe that assigning animals with human emotion has been a scientific taboo for decades. Thus the studying of apes has only confirmed their linguistic abilities and being excellent tool makers.

Other studies 7 found that both humans and cats have identical neurochemicals and regions in the brain responsible for emotion. However, it is not anthropomorphic to credit cats with emotions such as jealousy.

An empirical study of anthropomorphism conducted in 1944 by Fritz Heider and Marianne Simmel involved a long animation of several shapes moving around on the screen in varying directions at various speeds. When subjects were asked to describe what they saw they were found to assign intentions and personalities to the shapes. For instance, the large triangle was characterized as a bully that was chasing the other two shapes, until they tricked the large triangle and escaped. Research confirms that when people see objects making motions for no apparent reason, they tend to view the objects as intentional agents. A 2006 study 8 saw a rapid increase in understanding people’s propensity to turn non-human objects into human ones.

Psychologist Adam Waytz 11 and his colleagues created a three-factor theory to describe when people are most likely to anthropomorphize. They are:

When elicited knowledge is minimal but effectance and sociality are maximum, people are more likely to anthropomorphize. Children often anthropomorphize and use egocentric reasoning from an early age to make sense of events and tend to use it more frequently as adults. For instance, children describing a stormy cloud as angry or drawing flowers with faces. A report 12 assessed children’s capacity to perceive human-like intentions in non-human stimuli in the trajectory of learning to reason about mental states.

Studies 13 found that adults also show significant improvements in case of depression, social anxiety, or other mental illnesses when they tend to anthropomorphize emotional support from animals. Doctors are also often found to advise having a pet around as a means of boosting mental health. Sometimes pets can satisfy emotional or social connections in patients with mental illnesses.

A scientific study 14 reported that there may be three major consequences for perceiving an agent as human-like for both the perceiver and the agent. First, attributing emotions to objects means that the agent or object has a mind of its own and hence must be treated as a moral agent, worthy of care and concern. Second, having a mind of its own also means that the agent is capable of intentional action and can therefore be held responsible for their actions. Thirdly, if the agent has a mind of its own ultimately means that it is capable of observing, evaluating, and judging a human, thereby serving as a normal social influence on the individual. A 2007 study 15 confirmed that the dimensions of mind perceptions offered different moral judgments that were often related to the valuing of the mind.

People are more likely to anthropomorphize when anthropocentric knowledge is accessible and applicable, when motivated to be effective social agents or when there is a lack of social connection to other humans. Hence these factors help explain why anthropomorphism is so variable. As humans, anthropomorphizing objects and claiming it to have a mind of its own is only a means to make sense of things and receive emotional support.

Anthropomorphism At A Glance