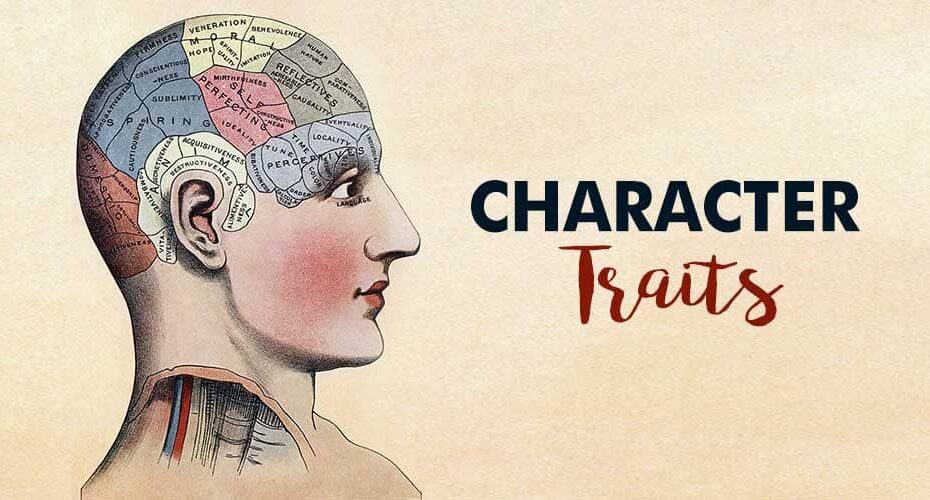 Character traits can be defined as an individual’s set patterns of thinking, feeling, and behavior. It is formed as a result of environmental factors and experiences.

What Are Character Traits?

Character traits can be defined as a set of morals that govern our thoughts, attitudes & behaviors and build up our personality. While personality traits are a set of distinctive personal traits that define our actions. These traits are our unique features, qualities and characteristics that make us who we are as individuals. Our mindset, beliefs, ideologies, ethics and morals play a significant role in the development of our character traits. Our ability to identify the positive and negative traits in ourselves enables us to reach our fullest potential in life. Moreover, when we are able to notice these traits in others, we can develop better relationships and avoid toxic individuals. These allow us to express our personality and our inner selves better and more openly.

When we have strong and positive traits, we can make better life decisions that are based on our morals and values. Some of the most common traits include ambitious, brave, disciplined, energetic, flexible, honest, intelligent, kind, patient, trustworthy etc. One 2019 study 1 found that traits like optimism, determination, tenacity, drive, conscientiousness, energy, compassion and positivity were the most common characteristics found in highly successful leaders. Understanding and recognizing our best and strongest traits can help us to hone them and achieve success in all spheres of life.

Any individual will have a combination of positive and negative character traits. It is essential to understand your traits in order to work towards a satisfying life. Some of the positive traits can include:

Some of the most common negative traits can include:

Although personality and character are used to define an individual’s behavior, both express different aspects of a person. Someone’s personality can be identified easily, such as introverted or extroverted. However, the character of a person is expressed and revealed over time. However, both are closely interrelated as these are the two essential predictors of our behaviors and attitudes towards ourselves, others and life. Yet personality and character differ from one individual to another. A person’s character is shaped by beliefs and perspectives. Character traits can be changed with effort and motivation. However, personality can be difficult to change. One 2006 study 2 , which pointed out that associations between traits and important life outcomes, confirm the predictive power of personality. Another 2007 study 3 pointed out that some misperceptions about personality traits are responsible for the idea that personality doesn’t predict important life outcomes.

Everyone has their own set of unique traits and personality. Hence, without a clear set of ideas of what defines a person, it can be difficult to make the correct choices in life. Knowing our personality and character traits can help us to make better choices and lead a satisfying life. Understanding an individual largely depends on their personality and character traits. Personality implies who we appear to be while character implies who we actually are. Our human instinct is to judge a person based on their personality. We believe that a person who is outgoing, confident, or fun is more likely to be honest, kind, and loyal. However, that may not be necessarily true.

We unconsciously connect personality traits with character traits because we want to like the person we already do and understanding a person’s character is a time-consuming process. It requires us to observe a person’s behavior in challenging situations to determine their character. Personality can change in the long run over the course of an individual’s life. A 2014 study 4 found that people show signs of increased maturity as they grow older.

In general, a person’s characteristics can be categorized in the following manner –

All these different types of traits help us develop unique attitudes, beliefs, behaviors and personalities that make us individuals. Although most can be expressed and observed with little or no effort, such as personality and emotional traits, others like beliefs and core values take time to identify and understand.

There is a wide range of character traits. Hence it is difficult to classify people in a particular trait. Character traits may also change over time with different circumstances and situations. Here are some theories that can help us understand our personality and traits better –

The OCEAN acronym stands for the following:

Extraversion is characterized by excitability, sociability, friendliness, assertiveness, talkativeness, and outgoing. People with this character trait are highly active and enthusiastic. People with high levels of extraversion love being the center of attention, conversationalists, or enjoy meeting new people. While people with low levels of extraversion dislike social settings, avoid interactions, or don’t like being the center of attention.

4. A stands for Agreeableness

Another widely accepted theory is the PEN Model 8 developed by Hans and Sybil Eysenck. They believed that these three traits i.e psychoticism, extroversion, and neuroticism are largely responsible for influencing one’s personality. These traits can be explained as follows:

Psychoticism is characterized by irresponsibility, miscalculation, and reckless behavior. People with high levels of psychoticism often engage in reckless and impulsive behaviors. Eysenck pointed out that this behavior may be influenced by high levels of hormones such as testosterone.

The Power Of Character Traits

It is possible to change your character with effort and hard work. An excellent character-building way is being open to feelings, being warm and affectionate, experiencing positive emotions, being less impulsive and anxious. Research 9 suggests that exercising these character traits posed greater life satisfaction, increased self-esteem, and being more optimistic.

Character Traits At A Glance