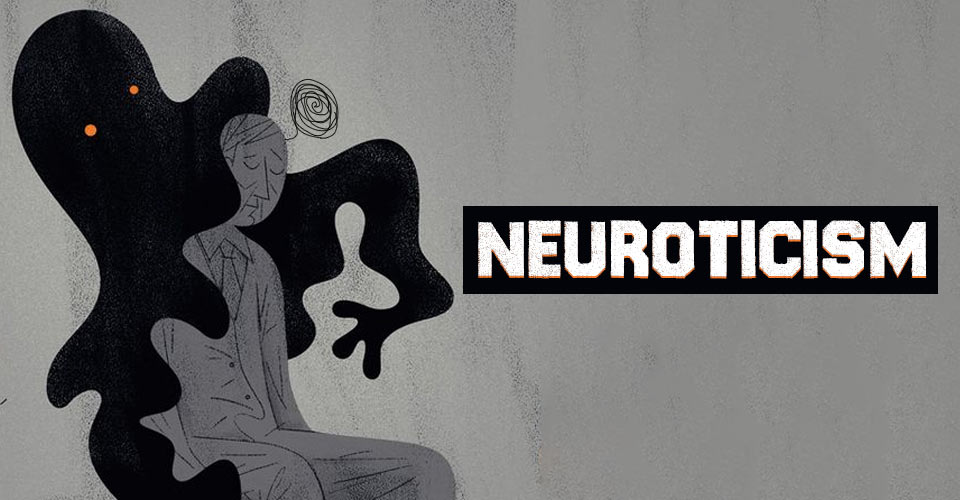 Neuroticism refers to a broad personality trait that allows a person to experience several anxious and negative emotions. It is one of the five personality traits of the ‘Big Five Personality Theory’ along with Extroversion, Openness, Conscientiousness, and Agreeableness.

Neuroticism is a human personality trait usually defined as a tendency toward negative feelings and emotions. In psychology and development, it is a significant personality trait that can be characterized by a variety of negative emotional states, such as anger, irritability, emotional instability, self-consciousness, depression, and many more. The term is derived from the concept of ‘neurosis’ which is considered a complex mental health disorder involving obsessive thoughts, anxiety, and chronic distress. However, the term ‘neurosis’ was removed from the Diagnostic and Statistical Manual of Mental Disorders (DSM) in 1980. It is not a psychological condition but a personality trait in which the world seems extremely distressing, unsafe, and threatening to a person. A neurotic person is more likely to feel dissatisfied with his/her life, report even minor health problems, and face adjustment issues in a wide range of situations.

A 2009 research paper 1 described Neuroticism as “a personality trait associated with negative mood states, sensitivity to negative information, negative appraisal and vulnerability to psychopathology.” The study says that it involves enhanced emotional and cognitive processing of negative affective stimuli. Like any other personality, it is mostly measured by a sliding scale ranging from high to low where high implies emotional instability and low defines emotional stability. People with high neuroticism are more likely to be in long-term negative emotional states, respond poorly to environmental distress, explain ordinary situations threateningly, and experience minor distress as extremely overwhelming, according to a 2017 study 2.

Neuroticism is a significant personality trait that can be characterized by persistent and disproportionate worrying and anxiety. That’s why neurotic behaviors are often misinterpreted as anxiety disorder and vice-versa. But recent research 3 suggests that neuroticism and anxiety disorder are not similar rather the vulnerable factors of this personality trait hugely contribute to the development of anxiety symptoms in adolescents and young adults. Research 4 says that a person with this trait often tries to be a perfectionist even in his/her daily activities and suffer from stress as a result of extreme anxiety. This trait forces one to focus on the negative aspects of every situation rather than positive ones.

Studies 5 have shown that neuroticism is associated with a few behavioral tendencies that have wide-ranging effects, mostly negative. For example, the partners of people with high neuroticism are more likely to be less happy, as compared to those whose partners have low levels of this personality trait. Though neurotic personalities are believed to be connected with negative connotations, it refers to a person’s emotional ability also. The core matter of it is how well a neurotic personality can deal with stressful situations. According to researchers 6, people with a neurotic personality tend to struggle a lot in adjusting to different situations, experience trouble in dealing with stress, complain about every possible thing, have poor self-regulation abilities, have numerous negative emotions, and react strongly to perceived threats.

Neuroticism At A Glance

People with a high level of neuroticism have a broad range of negative characteristics. The following are some of the common neurotic traits that can be observed in a neurotic person:

A 2015 research paper 24 has explained that neurotic behavior can develop from a few psychological disorders. It suggests that the broad range of neurotic personality traits is significantly associated with common mental health disorders, such as:

Studies 25 showed that people with an elevated level of neuroticism are much more vulnerable to developing anxiety disorders. A high level of neuroticism makes a person vulnerable to certain situations that often lead to the person developing anxiety symptoms. The symptoms of generalized anxiety disorder are similar to the characteristics that neurotic personalities have.

According to studies,27 a high level of neuroticism is strongly interconnected with a higher prevalence of OCD. It implies that the symptoms and tendencies of OCD are quite prevalent among neurotic personalities.

Researchers 28 suggest that certain characteristics of neuroticism, such as self-consciousness, vulnerability, impulsiveness hugely contribute to the development of social phobia in a person. These neurotic traits often make it difficult for a person to interact or communicate freely with other people.

A high level of neuroticism increases the risk of PTSD by magnifying the emotionality, centrality, and availability of trauma memories of young adulthood or midlife, according to a 2018 research paper 29 The severity of PTSD symptoms in neurotic personalities largely depends on the cognitive-affective processes that increase the availability of their trauma memories.

A 2019 study 30 has shown that neuroticism is associated with a diminished quality of life that negatively impacts the personal relationships of those who have a higher level of this personality trait. The following are some of the negative effects of neuroticism that can even break a healthy relationship:

People with a high level of neurotic personality traits often feel guilty about things that are not their fault. They tend to apologize for every single thing and ask for reassurance if the other person has forgiven them or not. It can become annoying to others after a certain point and he/she can lose interest in communicating with such people.

People with a high level of neurotic traits often become extremely annoying even to their loved ones. This mostly happens because neurotic people have a tendency to complain, be critical in minor issues, ask for reassurance, and be overly dependent on others.

Neurotic personalities are more prone to feel anger and irritability, and this nature makes them extremely enraged even over minor mistakes of others. It can create unnecessary conflicts between parents and children or two partners in a romantic relationship. Neurotic people also have a tendency to put all blame on others due to their own worry which can lead to arguments and conflicts.

People with high neurotic traits can unintentionally pass on their worrying nature to their close ones. Children with neurotic parents often perceive that all situations are dangerous and can harm them. Additionally, they start to be cautious of threats all the time that can affect their mental health too.

Neurotic people often seem unreliable to others as they tend to panic at the sign of the smallest thing. Unreliability can have serious effects not only on personal relationships but can also create obstacles in the path of professional success.

Neuroticism is not a psychological disorder rather a personality trait that involves a tendency towards negative emotions. That’s why there is no treatment to prevent such negative emotions, but a neurotic person can adopt some coping strategies to live a healthy life. One needs to focus on the positive aspects of different situations. If any problems appear, it is important to focus on the problem and not on the emotion. Along with this, connecting with new people and making strong relationships without any hesitation can also bring positive impacts. However, if one is facing a lot of difficulties due to their high levels of neuroticism, they should consult with a mental health professional and seek medical support.