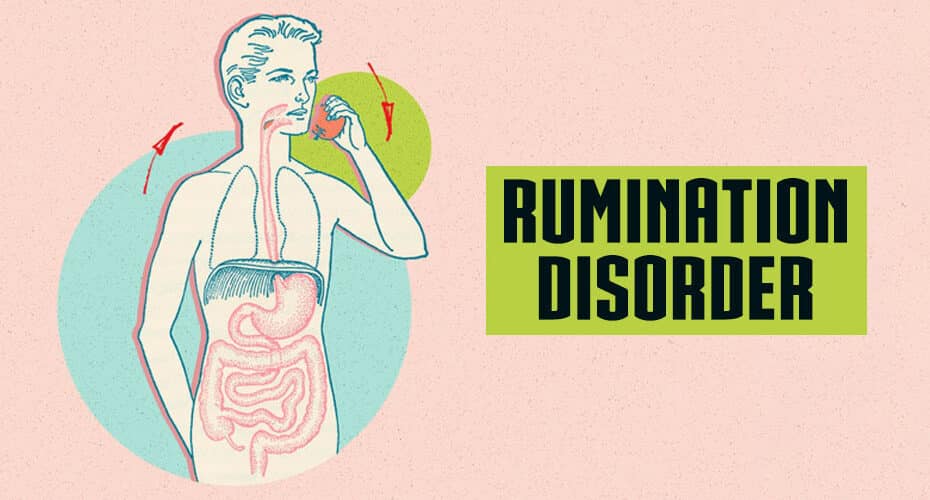 Rumination disorder is a condition characterized by unintentionally spitting up or regurgitating undigested or partially digested food from the stomach. It is believed to occur due to a habit or reflex that develops through a conditioned response to stimuli.

What Is Rumination Disorder ?

Rumination disorder, also known as rumination syndrome, is a rare and chronic condition that involves a person unintentionally regurgitating undigested food. Regurgitation occurs when ingested food rises to the oesophagus, throat, and mouth but is not involuntarily forced out of the mouth as it is when vomiting occurs. Rumination, also known as regurgitation in animals with compartmentalised stomachs such as cows and sheep, is a digestive function. However, it is thought to be a rare condition in humans.

Mind Help defines the condition as “a chronic psychological disorder characterized by unintentional and repeated regurgitation of partially digested or undigested food following consumption, then rechewing it. The process is then followed by either re-swallowing the food or spitting it out.” As it usually occurs within a period of 30 minutes after a meal, the food reportedly doesn’t taste as acidic as vomit. Also known as merycism, it can often be confused with vomiting or digestive issues, but it doesn’t have any abdominal pain, heartburn, odor, nausea or retching. According to a 2019 study 1 , the disorder involves “repeated, effortless food regurgitation during or soon after eating, followed by rechewing, reswallowing or spitting out of the regurgitant.” This condition is a reflex response and not a conscious decision. Rumination syndrome is labelled as a “functional gastroduodenal disorder” as well as a “feeding and eating disorder.”

The syndrome may begin in childhood or adulthood. Rumination was reported 3 mainly in children with disabilities, especially mental retardation. But this condition has been largely unrecognized in adults, until recently, when physicians began to take a closer look at family history and other associated factors. However, it is a misconception that rumination only occurs in children with disabilities and cows.

Children with rumination disorder tend to rechew the regurgitated food and swallow it. Adults, on the other hand, spit it out. Individuals may begin to regurgitate within a minute of ingesting food. This condition is often found to adversely affect the normal functioning and social lives of individuals. The Genetic and Rare Diseases Information Center (GARD 4 ) defined this disorder as “the backward flow of recently eaten food from the stomach to the mouth.The food is then re-chewed before being swallowed or spat out.” Research 5 shows that this syndrome can cause significant impairment to a person’s life that includes medical complications and psychosocial disturbances.

For some people, regurgitation is minor and occurs over a long period of time after ingestion. After that, it is rechewed and swallowed. According to the American Academy of Pediatrics, symptoms can begin at any point in the ingestion of the meal to 120 minutes after consumption. However, it can range between 30 seconds to an hour after the completion of a meal. The regurgitated food does not taste bitter or sour because it did not have the time to mix with stomach acid and be digested. The primary cause of this condition is usually due to habitual abdominal wall contraction that makes the individual regurgitate after ingestion of food.

The symptoms of rumination syndrome are different from acid reflux and gastroesophageal reflux disease or GERD 6. Here are some common differences:

A 2011 study 7 defined rumination syndrome as “the regurgitation of undigested food from the stomach back up into the mouth.” The primary symptom of this disorder is the repeated and unintentional regurgitation of undigested food. It typically occurs between half an hour or two hours after eating. People suffering from this condition regurgitate almost every day and after every meal. Other symptoms associated with this condition are:

The symptoms of this disorder are the same in the case of an adult as well as children. However, adults are more likely to spit out undigested food. Children often tend to rechew and swallow it.

The exact cause of this condition is still unknown. However, some people may develop this syndrome due to emotional issues or undergoing any stressful events. It is believed to be an unconsciously learned disorder involving voluntary relaxation of the diaphragm. For instance, someone with this condition may unknowingly never have learned to relax their abdominal muscles. Contracting the diaphragm muscles can cause regurgitation. One 2011 study explains “Rumination is commonly believed to be an unconscious learned disorder (ie, a behavioral issue) involving voluntary relaxation of the diaphragm.” Some probable causes for the development of this disorder may include the following:

It can be explained that when the food expands the stomach, it is followed by an increase in abdominal pressure and a relaxation of the lower esophageal sphincter. The following digestive sequence of events allows the stomach contents to be regurgitated.

The commonly notable environmental factor is the abnormal mother-infant relationship, where the infant seeks internal gratification in such cases or as a means to escape in an overprotective environment. Negligence of or an abnormal relationship between the mother and child that can cause the child to rely on self-comfort. In some children, the act of chewing is comforting.

Boredom, a lack of occupation, familial disharmony, and maternal psychopathology have all been linked to the onset of rumination.

Apart from the ones mentioned above, some additional causes may include:

Rumination syndrome can occur in anyone, but it is most common in infants and children with intellectual disabilities. There are certain risk factors associated with this condition that include:

The doctor will conduct a physical examination and evaluate the child’s symptoms and medical history. There is no test to detect this condition. The diagnosis is based on the signs and symptoms that are experienced by the patient. People with this condition also experience vomiting or acid sensation/taste in their mouths.

There are tests that may be used to rule out other underlying medical conditions. This may include blood tests and imaging studies that may help to rule out gastrointestinal disorders. The doctor may also look for other symptoms, such as dehydration or nutritional deficiencies. Other tests may include:

This disorder has been often linked to other eating disorders, particularly bulimia nervosa. The Diagnostic and Statistical Manual of Mental Disorders, fifth edition, (DSM 5) laid down the diagnostic criteria 8 for rumination disorder:

The doctor may also ask several questions that can include:

The treatment process for this condition is primarily focused on changing the child’s behavior. Some of the adopted techniques include:

Here some other treatment options available for this syndrome:

People with rumination syndrome who do not have developmental disabilities are treated with habit reversal behaviour therapy (HRT). According to a recent 2020 study 9 , “HRT has been effective in treating a host of repetitive behavior problems.” Research 10 indicates that habit reversal therapy includes several aspects, such as “awareness training with self-monitoring, relaxation training and competing response training,” that can greatly help the patient overcome the symptoms.

In this therapy, the patient is taught to recognize when rumination occurs, to breathe in and breathe out using abdominal muscles (diaphragmatic breathing). Diaphragmatic breathing helps to prevent abdominal contractions and regurgitation. Studies 11 suggest that practicing this breathing technique is required to increase its effectiveness.

In order to perform diaphragmatic breathing you have to:

Treatment for infants typically focuses on collaborating with parents or caregivers to change the infant’s environment and behavior.

In case frequent rumination is damaging the esophagus, proton pump inhibitors such as esomeprazole (Nexium) or omeprazole (Prilosec) may be prescribed by the doctor. These medications help to protect the lining of the esophagus until the frequency and severity of regurgitation with behavior therapy. Some people may benefit from treatment with medication that helps to relax the stomach after eating.

There’s no preventive measure for this disorder in babies and children. It is important to pay attention to your child’s eating habits. This may prove helpful in detecting the disorder early when the symptoms first start to appear.

Babies and children mostly recover from the condition with age and outgrow the symptoms and return to eating normally. This disorder can continue for months with children who are older. With treatment, it is possible to recover from this condition and live a healthy life.

Rumination Disorder At A Glance