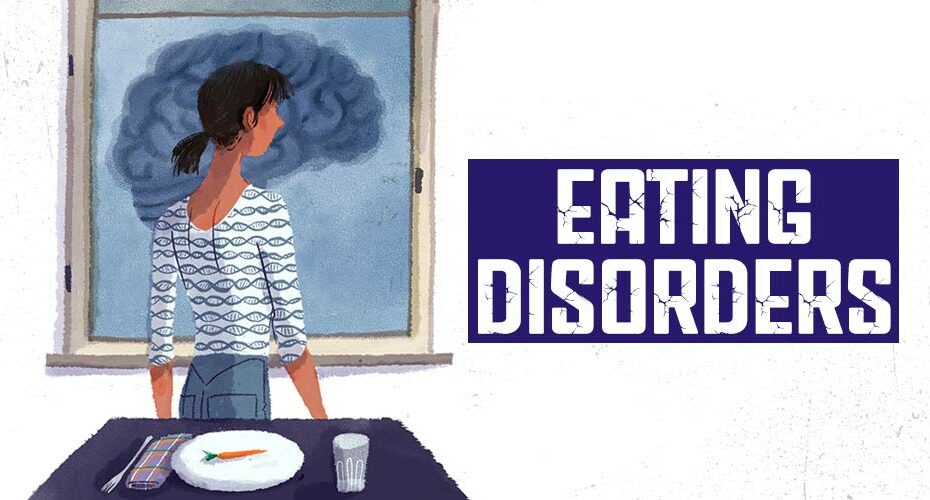 Eating disorders are serious conditions characterized by an incessant urge to eat that can have negative impacts on their physical and mental state and engaging in compensatory behaviors, like purging or excessive exercising after the binge episode.

What Are Eating Disorders?

Eating disorders are life-threatening conditions characterized by abnormal eating habits that can negatively impact an individual physically and mentally. Most eating disorders involve an extreme focus on reducing weight, excessive eating, and body shape. A research paper 1 explains the condition as “a persistent disturbance of eating behavior or behavior intended to control weight, which significantly impairs physical health or psychosocial functioning.” Such behaviors can severely impact the body’s ability to get the appropriate amount of nutrition it requires to stay healthy. Eating disorders can also cause medical conditions related to the heart, digestive systems, bones, teeth, and mouth. For some people, exercising control overeating or excessive exercising is a way to gain control of their weight. It may begin as simply eating more than usual and gradually develop into out-of-control eating behavior.

According to a 2015 study 2 , such conditions are disorders associated with eating behaviors that affect our thoughts, emotions & attitudes and involve the ensuing physiological impairments. “Eating disorders are associated with a significant burden on patients and their family members and have among the highest mortality rate one of the psychiatric disorders,” explains the study. These disorders develop during teenage years and in young adulthood. This condition affects both genders wherein women are more affected than men. The causes of this condition are unclear but there may be genetic, environmental, and biological factors involved. Recovery is possible with treatment and medications. In extreme cases, hospitalization may be required to attend to any associated medical conditions.

Eating disorders, particularly bulimia nervosa and anorexia nervosa, are typically observed in young females. A 2015 study 3 found that these disorders affect almost 12% of dancers. One 2010 study 4 found that individuals who have experienced sexual abuse are more likely to develop this condition. A 2015 report found that anorexia affects about 0.4% and bulimia affects about 1.3% of young women in a given year. Anorexia and bulimia occur nearly ten times more often in women than in men. A report 5 conducted to devise the expected time for recovery found that 70% of people with anorexia and 50% of people with bulimia recovered within five years. It is important to keep in mind that anorexia and bulimia have an increased risk of death.

Anorexia nervosa is a type of eating disorder characterized by having an unrealistic idea about body image and an intense fear of gaining weight. Individuals with this condition are extremely focused on their weight. Due to this, they often resort to extreme measures such as excessive exercising or misusing laxatives. This can negatively impact their daily life and mental state. In order to prevent weight gain, they also restrict their food intake to keep their calorie intake in check. A 2014 study 6 confirmed that it is the most common chronic condition among teens. This condition is more common in females than in males. A 2006 study 7 found that the average prevalence rate of anorexia among young females is 0.3%.

The signs and symptoms of Anorexia nervosa includes:

Bulimia Nervosa is an eating disorder characterized by consuming a substantial amount of food and purging, and feeling a lack of control over the excess food intake. This condition is a life-threatening disorder since it may cause medical conditions that require immediate attention. Bulimia usually involves uncontrollable eating which may stop if the individual is interrupted or if their stomach starts to hurt. This is followed by self-induced compensatory behavior, such as purging or using laxatives. The individual suffering from this disorder usually binges and purges in secret. According to a psychiatry report 8 conducted on the incidence, prevalence, and mortality rates for eating disorders, there is also a higher risk of suicide and self-harm associated with this disorder. A 2018 study 9 found the prevalence rate of bulimia nervosa is between 1% to 5%.

The common signs and symptoms of bulimia nervosa are:

Binge eating disorder is a condition characterized by consuming copious amounts of food and feeling a loss of control during the binge episode. People with this condition eat even when they are not hungry and can continue to eat even after they are full. A 2016 study 10 reported that individuals with binge eating disorder often experience extreme distress about their overeating, body shape, and weight. Reports 11 suggest that almost 2% of people worldwide suffer from BED and can also cause additional health issues related to diet.

Some of the signs and symptoms of binge eating disorder are:

Pica disorder is an eating disorder characterized by consuming things that are not considered food. Individuals with this condition often crave non-food items such as ice, chalk, dirt, soil, soap, hair, pebbles, and others. Children or individuals experiencing this may be at an increased risk of poisoning, infections, gut injuries, and nutritional deficiencies. In accordance with the substance consumed, pica may also be fatal. The exact prevalence rate 12 of pica can be challenging. A German prevalence study 13 of 804 children found that 99 children (12.6%) have engaged in pica behaviors at some point in their lives.

The most common signs and symptoms of pica disorder are:

Rumination disorder is an eating disorder wherein an individual regurgitates food they previously consumed and then re-chews and re-swallows it or spits it out. This condition occurs within the first 30 minutes of eating the meal. Regurgitation usually occurs when ingested food rises to the esophagus, throat, and mouth but it is not involuntarily forced out of the mouth as it is done while vomiting. Rumination, also known as regurgitation is a digestive function in animals with compartmentalized stomachs such as cows and sheep. But it is believed to be a rare condition in humans. A 2012 study 14 found the prevalence rate was 5.1 percent in males and 5 percent in females. Surveys also showed a prevalence rate among infants to be 6 to 10 percent 15 of the population.

The signs and symptoms of this disorder are as follows:

Avoidant/restrictive food intake disorder is a new term replaced by “feeding disorder of infancy and early childhood”. AFRID is a serious condition that drives people to undereat.

This condition develops during infancy or early childhood and can also continue during adulthood. It’s a common condition among men and women. People tend to experience disrupted eating patterns due to a lack of interest in eating or distaste in certain smells, tastes, colors, textures, or temperatures. A 2018 study 16 found that the prevalence rate of this condition is 3.2%.

Common signs and symptoms include:

Children are found to be picky eaters. In the case of adults, they have a lower food intake. It is important to keep in mind that this condition doesn’t include the avoidance or restriction of foods due to lack of availability, religious or cultural practices.

The exact cause of eating disorders is still unknown. However, there may be other factors involved in developing this condition.

Experts believe that genetics may be a contributing factor in developing eating disorders. Twin and adoption studies 17 found that twins who were separated at birth and adopted by different parents found evidence that eating disorders may be hereditary. This 2015 study 18 found that if one of the twins develops this disorder, there’s a 50% chance for the other twin to develop it too.

Another cause of this condition may be personality traits. A report found that neuroticism, perfectionism, and impulsivity are the three most common personality traits linked to an increased risk of developing this disorder.

Experts believe that differences in brain structure and biology may play a role in the development of eating disorders. Studies 19 found that hormonal imbalances in the brain may trigger the urgency to consume copious amounts of food to an extent that can have life-threatening and negative impacts on an individual.

There may be several comorbid conditions associated with these conditions. They include

There may be certain complications associated with this condition that can include:

Treatment for eating disorders depends on the severity of the symptoms. People with this condition are at a higher risk for suicidal and medical complications. Patients may also suffer from underlying mental disorders or problems with substance use. It is possible to recover from this condition with therapy and medications.

Some of the treatment methods are as follows:

Psychotherapy can significantly help in treating such disorders and enable the sufferer to make smarter lifestyle choices. Studies 20 have found that psychosocial interventions can be effective in treating eating disorders. Cognitive behavioral therapy, group therapy, family psychotherapy may be recommended for patients suffering from this disorder.

Cognitive behavioral therapy is used to identify the thoughts and patterns that govern the eating behavior of the patient. In order to reduce or eliminate negative eating behaviors, it is essential to identify the underlying cause that’s triggering the negative behavior. A 2010 study 21 found that cognitive behavioral therapy was most effective for treating patients with bulimia, binge eating disorder, and night eating syndrome. It also showed improvements in the depressive symptoms present in patients with these conditions.

Group therapy involves working together as a group under the supervision of a psychologist. It can help to understand the thoughts and beliefs associated with things such as food, weight, body shape, or appearance. A 2017 study 22 found that group therapy is particularly effective at achieving abstinence rates of binge eating and purging as well as decreasing the frequency of binge eating and purging behaviors.

Family therapy can also help the patient in managing the eating disorder. This therapy helps to improve communication and resolve conflicts among family members. It can ensure that family members help the patient to maintain healthy eating patterns, restore and maintain a healthy weight, and interrupt unhealthy patterns of this disorder. A 2016 study pointed out that family therapy showed greater effectiveness for people with anorexia.

Some medications may be prescribed to the patient to manage the symptoms of these disorders. However, there is no medicinal cure for this disorder. The doctor may prescribe antidepressants for depression or to treat any comorbid conditions associated with it.

It can help to reduce the symptoms of anxiety and depression. A 1991 study 23 attempted to understand the effectiveness of lithium carbonate in treating patients with bulimia. It was found that medication demonstrated efficacy only for treating comorbid disorders such as depression or OCD. However, there is limited evidence 24, 2(6), 43–48. )) that suggests that antidepressants may help maintain weight gain in patients with these disorders.

Dieticians and other professionals can help you to understand your eating disorder better. They can help you develop a plan to maintain a healthy eating habit and ensure whether you are having a nutritious diet. The dietician can prepare a diet plan to establish a regular healthy eating pattern in order to avoid binge eating or dieting. A 2013 study 27 pointed out that nutritional counseling is an essential tool to help correct nutritional deficiencies and abnormal eating patterns.

Most people with eating disorders recover with therapy, medications, or nutritional counseling. It can negatively impact an individual’s body if left untreated. There is no definite way to prevent these disorders. It is important to seek professional help in case you are experiencing the symptoms.

Eating Disorders At A Glance