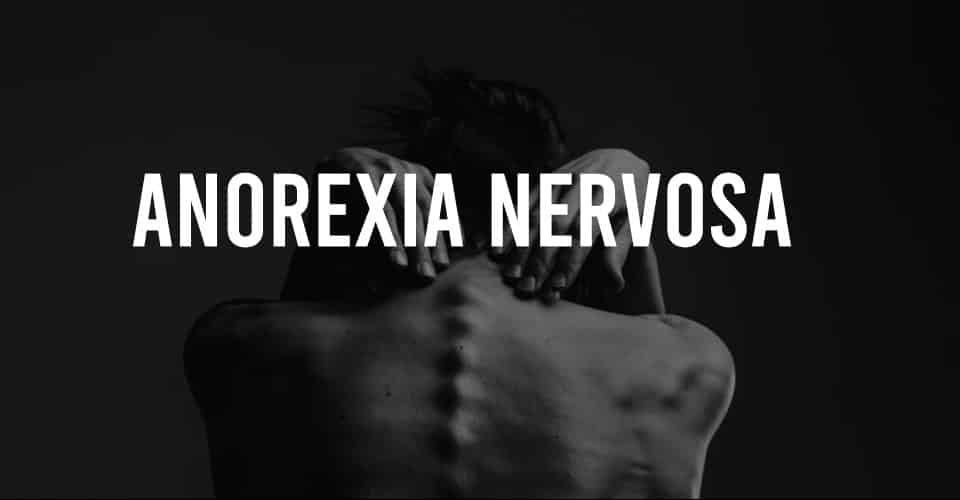 Anorexia Nervosa is an eating disorder characterized by unrealistic body image ideals and an intense fear of becoming overweight. It makes the sufferers become obsessed with their weight and their food

What Is Anorexia Nervosa?

Anorexia Nervosa is an intense psychological condition where a person develops an unrealistic idea about body image and extreme fear of gaining weight. People with this condition tend to have an intense focus on controlling their weight and shape. Using extreme measures such as exercising, or misusing laxatives can cause severe consequences to the individual. A recent scientific paper 1 explains “Patients will have an intense fear of gaining weight and distorted body image with the inability to recognize the seriousness of their significantly low body weight.”

In order to prevent weight gain, most people with anorexia nervosa restrict their food intake. They control their calorie intake by vomiting right after eating or using laxatives, diet aids, or herbal products. Excessive exercising for being afraid of gaining weight is also a sign of this disorder. They eat an extremely low-calorie diet due to their excessive fear of gaining weight. People with this condition are often hungry but refuse to intake food anyway. These individuals tend to take it as their “perceived flaw” and try to reach their “ideal weight”.

The risk of developing this condition is often found in actors, models, dancers, or athletes. They are often found to experience symptoms of anxiety, depression, or obsession due to their intense drive towards perfectionism. People with this condition tend to experience a combination of behavioral, emotional, and physical symptoms. Experts believe that there may be a combination of genetic, environmental, and psychological factors involved in developing this condition. Anorexia Nervosa can be a potentially life-threatening disorder since extreme weight loss can be detrimental to one’s health. The primary goal of treatment can include restoring the patient to its ideal weight, treating emotional problems such as low self-esteem, distorted thinking patterns, anxiety, or depression, and behavioral changes.

This condition usually begins during the teenage years or adulthood. A 2014 study 2 confirmed that it is the most common chronic condition among teens. This condition is more common in females than in males. A 2015 study 3 reported nearly 1 in 100 women experience this disorder at some point in their lives. A 2003 study found that over 30 million men and women have at least one eating disorder in the United States. A 2006 study 4 found that the average prevalence rate of anorexia among young females is 0.3%.

An individual may diet to control their weight but people with anorexia attempt to control their life’s emotions through controlling weight, especially in case of a traumatic event. For an individual, the primary goal of dieting is to lose weight. But in the case of anorexia, they may diet because they tend to perceive weight loss as a way to attain happiness.

There are mainly two classifications of this disorder. Both types tend to exhibit similar symptoms.The sub types include:

The individual with this disorder tends to purge after eating. Binge eating intensifies the fear of gaining weight and triggers the guilt of eating too much food. Thus, they resort to compensatory behaviors such as purging in order to control their calorie intake. They may also try to keep the calorie intake in check through excessive exercising or using laxatives.

The individual with restrictive anorexia often puts themselves on a highly disciplined pedestal in terms of weight gain. Hence they often restrict ingesting food that is high in calories, fat, or sugar. They tend to consume fewer calories in order to maintain their “ideal healthy weight”. This is a form of self-starvation in order to control weight gain.

Signs And Symptoms Of Anorexia Nervosa

The primary symptom of this condition is having an intense fear of gaining weight. Other signs and symptoms of anorexia nervosa are as follows:

Physical signs and symptoms of anorexia include:

Some of the most common behavioral symptoms of this condition may include the following;

The exact causes of this disorder are still unknown. It may be a combination of biological, psychological, and environmental factors.

There may be genetic factors involved in developing this disorder. However, it is not clear how genes are involved. Some individuals may have a genetic tendency towards perfectionism, sensitivity, and perseverance. These traits are associated with anorexia. Anorexia tends to run in families, so having a family history may also increase the susceptibility of the disorder. A 2004 study found increased rates of eating disorders in relation to women.

Hormonal changes may also be a contributing factor in developing this condition. These hormonal changes may interfere with the mood that is responsible for mood, appetite, and thinking. A 2014 study found that endocrine changes, including hypothalamic amenorrhea (a growth hormone), tend to affect neurocognition, anxiety, depression and eating disorders.

Some individuals with this condition may also have obsessive compulsive traits that help them stick to their rigid diets and skip meals despite being hungry. They may also have an extreme drive for perfectionism that makes them think that they don’t have the ideal weight. Experiencing high levels of anxiety may also contribute to developing this condition. Due to this, they engage in restrictive eating behaviors. Studies have shown that the personality traits in adolescence are constantly changing patterns of perception about the environment and oneself due to ongoing developmental changes in personality.

In our fast pacing era, there is an emphasis on having the ideal body weight. Our success and worth are often linked with how we appear physically (body weight). Peer pressure may also be a contributing factor in developing this condition. Research on parenting and its relation to eating disorders was found to be an important aspect of developing this disorder. A 1986 study found the impact of having a stressful life may trigger the intense desire to binge eat and having unhealthy attempts to cope with the weight gain.

The doctor will first do a thorough physical exam to check your blood pressure and heart rate. They will then recommend a psychologist who will conduct an evaluation of your eating habits and feelings. They will also ask the patient about weight loss, their feelings about their weight, in the case of females about menstruation. If the physician sees signs of anorexia they may order tests to rule out other underlying medical conditions that pose similar signs and symptoms:

These tests can include blood tests, imaging scans, and electrocardiogram (ECG). The Diagnostic and Statistical Manual of Mental Disorders (DSM 5) has laid out a diagnostic criteria for this disorder. They include:

After evaluation, the doctor will devise a treatment plan to treat the conditions of this disorder.

This disorder can have a wide range of problems. In extreme cases, it may even be fatal. Some of the complications associated with this condition include:

People with this disorder experience psychiatric comorbidities in addition to physical complications. They include:

Excessive thinking about weight gain can lead to obsessive traits. This can ultimately lead to other conditions such as OCD. Substance or alcohol abuse may also be adopted as a means to cope with the stress that comes with weight gain. A 2018 study confirmed that psychiatric comorbidities such as depression or anxiety are common in patients with anorexia nervosa. Some observations also found a positive genetic correlation between anorexia and schizophrenia. A 2006 study explained that the most important principle of treating comorbidities is the recognition of the effects of starvation and unstable eating habits.

Most individuals do not seek treatment for this condition. This is because they do not even realize it. The primary aim of treatment is to restore normal body weight and establish normal healthy eating habits. The doctor may also recommend a dietician to learn how to have nutritious meals throughout the day. For most individuals, this condition becomes a lifelong challenge.

Therapy has often proven beneficial for people suffering from this condition. Therapy is the most integral part of treatment. The different forms of therapy that are adopted are as follows:

CBT is used to evaluate and understand the negative thoughts and patterns that govern the negative eating habits. After identification of the thoughts and patterns, these thoughts are then altered with positive ones to attain the desired outcome. The doctor may also help the patient with different coping strategies to ease the symptoms. The goal of this therapy is to build strong self-esteem around body weight. A 2005 study found significant results in treating patients with eating disorders including anorexia.

Family therapy is essential in order to get your family members involved in helping them keep track of their eating habits and lifestyle. This therapy also helps in resolving conflicts among family members. It can also help family members to cope with the person experiencing anorexia nervosa. A 2000 study found significant changes in the behavior of the patient when family therapy was adopted as a part of treatment.

Group therapy enables individuals to interact with others who have the same disorder. However, this can sometimes lead to a competition of being thin. In order to avoid this, it is essential to attend group therapy with a mental health professional present. There is little evidence that therapy for patients with this disorder benefits from being delivered in group sessions.

With therapy and medication, recovery is possible. Some people tend to relapse even after years of therapy. However, a 2001 study demonstrated a full recovery even after 21 years of chronic severe anorexia nervosa. If the patient follows a nutritious diet it is possible to avoid other illnesses associated with this disorder and protect themselves from irreversible damage. With self-determination and family support, it is possible to avoid relapse and lead a healthy life.

Anorexia Nervosa At A Glance