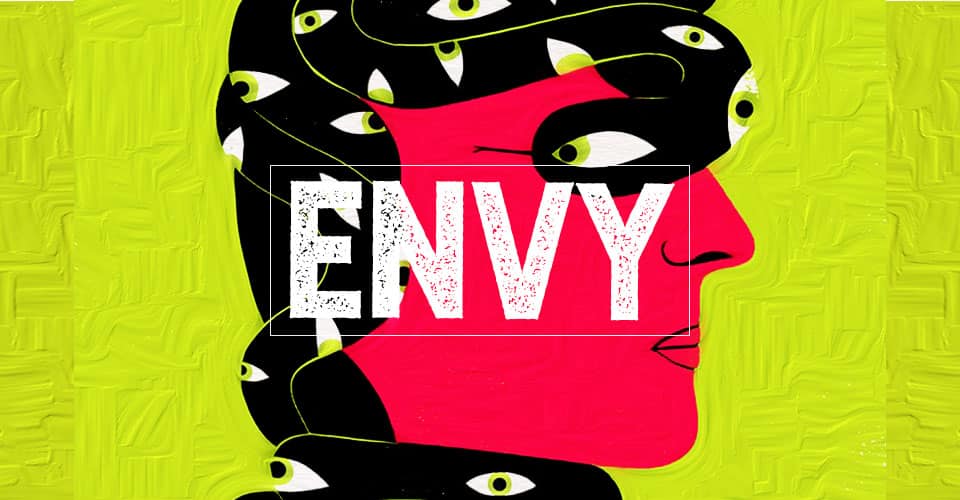 Envy is an emotion that manifests in individuals as a result of comparison. It can spur self-improvement in individuals but is more widely known for the negative impact it can have on personal relationships.

Envy can be described as the unpleasant feeling that arises when we make unfavorable comparisons with others. On the forefront, it appears to be a hostile emotion that may lead to violent behavior. The emotion has been cited as the motive behind many publicized crimes and conflicts. The emotion is often associated with a series of destructive behaviour, such as the spiteful joy experienced when the envied person suffers, the desire to destroy another’s advantage at the expense of one’s own results 1 , or the willingness to destroy good things so as to reduce the advantage of others. However, it is not necessarily a negative emotion, according to a 2017 study 2 . “Sometimes the actual reasons for the envy are buried in your unconscious mind and disguised by rationalizations,” adds the study. In spite of the aforementioned cases, it is still difficult to provide a standard definition and detail its particular characteristics. Prevalence of the emotion in society, though, makes it imperative to gain an understanding of its nature and causes.

The modern world is rife with various institutions and businesses, such as social media and different mediums of advertising, whose mode of operation results in people being unsatisfied with themselves, as they are constantly bombarded with snippets from the lives and activities of people they perceive to be superior. This tends to have a negative impact on society as a whole, as possessing such sentiments are linked to a lower quality of life.

Studies 3 show that the young are particularly susceptible to this emotion, and this trend tends to decline with age. The analysis also predicts its presence in society today will lead to a decline of mental health and well-being in the future. The rise of social media and targeted advertising has spurred an interest in the degenerative effects of widespread social comparison in modern society. Research 4 has established a link between heavy social media use, and lower mental health. One 2018 study 5 found that social network users tend to feel more of this emotion when they see their online friends engage in experiential purchases, like traveling, than material purchases, like new gadgets. This makes it essential to be aware of such unchecked emotions within us, and to employ techniques to deal with them appropriately.

Though often used in the same context, envy and jealousy have long been considered to be distinct emotions. Social psychologists and scientists have long emphasised on the difference between the two emotions, stating that both have their own characteristics 2 . The former is associated with the feeling that occurs when the individual lacks a superior quality, possessions, or achievements of another person that they either desire for or wish that the other lacked. It occurs in a self-defining domain, and increases with dissatisfaction and when the other lacks superiority in alternate comparative domains. These situations do not result in a single outcome, manifesting instead as a collection of multiple, distinct elements that typically occurs during an episode. These elements may include feelings of resentment, longing for better circumstances, inferiority and wishing ill on the envied person. This is sometimes accompanied by feelings of shame, guilt or denial of the inappropriateness of the ill will. Understanding this complex emotion has contributed to research on social comparisons, life satisfaction, and social justice.

Jealousy on the other hand, occurs in the context of a relationship. A study from 1981 6 categorizes jealousy as the fear of losing a valued relationship to a rival, or in other terms, losing a relationship that is an intrinsic part of the sense of self. Similar to envy, jealousy manifests in the form of episodes, involving distinct effects. In the context of jealousy, these effects include fear of loss, anger, suspicion and agony of betrayal, as concluded in a 1985 study. A proper understanding of jealousy has been of prime importance in the study of clinical psychology. One of the primary factors that distinguish envy and jealousy is intensity. Research in the field 7 has concluded that intensity with which we feel jealousy is more than envy. The difference in intensity makes it harder to assess the difference in quality between the two emotions.

The emotion is marked by different forms of difficulty in social compliance, such as low self esteem, depression and anxiety. It is often observed that individuals are reluctant to accept that they face this emotion. According to a study, a person can be termed envious when his actions are seen as a deliberate attempt to flaunt self esteem, or to humiliate others in order to preserve self worth. The following are signs of envy, in order of increasing maliciousness:

The aforementioned reactions can also be categorized under personality disorders. One primary characteristic observed in these disorders is the tendency to harm the other person. The patterns of behavior exhibited by them are usually catering to the ego. According to one study 9, the realization of such behavioral patterns may produce angst in the sufferer, often leading to self-hate, anxiety, depression and substance abuse. Moreover, it becomes more difficult to make an assessment of the individual if he chooses to hide or remains in denial of his condition.

Benign envy is usually aimed at improving one’s current situation, whereas the malicious kind focuses on feelings revolving around the envied person, such as thoughts that they are undeserving of the advantage. However, Though both benign and malicious envy are a direct consequence of an unfavourable comparison to another individual, they are distinguished by distinct behavioral patterns 11 . The former manifests in the form of positive thoughts about the envied individual, an increased focus on the self, and the adoption of behaviours that attempt to level perceived differences through the elevation of personal status, resulting in improved chances of success and higher goal setting, while maintaining performance. Malicious envy, on the other hand, features negative thought patterns regarding the envied individual, and attempts to level differences by undermining that person. This exhibits itself in the form of an increased focus on competitors, with behaviours that aim to impede their performance.

The usage of benign and malicious does not necessarily establish either as “good” or “bad”, as research has indicated 12 that both categories have correlates to the Dark Triad of personality, specifically Machiavellianism and psychopathy. Hence, psychology remains concerned with the functionality of this emotion, and how it can bring about change in an individual. A paper published in 2018 13 suggests that both forms can motivate self improvement in individuals, assuming that the opportunity to do so occurs outside the domain that evokes emotion. Benign envy reinforces the belief that effort is directly proportional to being rewarded, and hence, motivates an effort focused goal pursuit with a determination for self improvement. Malicious envy establishes the belief that effort does not determine a fruitful outcome, and hence, promotes outcome-focused goal pursuit and self improvement independent of effort.

In a recent report, the researchers described the nature of this complex state of mind and the impact it can have on our physical and mental health. They suggested how envy is more likely when the domain of comparison is important to you. Parents often tend to react to the image of “perfect parents”, which is a common type of this emotion, for they feel their parenting skills are inferior to their peers. Envy can manifest as a destructive emotion, both mentally and physically. An envious person tends to feel resentful, hostile, irritable, and more importantly less grateful about their positive traits and nature of the situation. It is often associated with anxiety 14 , depression 15 , and prejudice 16 . These tend to overwhelm the person, making them stressful.

Although most people who feel envious prefer to keep it a secret, the coping strategies they employ depend on their own worldview and the practices of the culture that they are a part of. This emotion is typically associated with inferiority, deprivation, and/or wishing ill of the superior other. This leads to its common association as a socially unacceptable and immoral behavior.

Here are a few ways to cope with envy:

Addressing one’s underlying beliefs that act as the root cause behind feeling envious is an important step to the process of coping with the emotion. It is essential to obtain emotional awareness; this ability is dependent on a whole variety of factors such as understanding social relations, emotional expressions, and relating to the values and meanings established by the society they belong to. These social skills are usually obtained via socialization during childhood, which leads to the child developing social strategies and the ability to deal with specific complex emotions.

Another important coping mechanism is the practice of gratitude. According to research 17 , gratitude can greatly help reduce the negative symptoms attributed to envious individuals. Training your mind to express gratitude greatly reflects on mental well being and social standing. Expression of gratitude also leads to greater social support, and this leads to a reduction in a variety of negative emotions such as anger, depression, and anxiety. Studies 18 indicate that expression of gratitude also leads to prosocial behaviour. These mechanisms can act as effective coping strategies towards establishing a more holistic environment for development.

3. Resist the urge to self isolate

Envy is an unavoidable outcome of life, and feeling envious does not make someone a bad person. However, it is important to understand the behavioral outcomes of the emotion, and evaluate whether our attempts to mitigate these differences should be encouraged or dampened. Self-improvement remains the ideal outcome for most, and unless cases of systemic differences prevail that prevent personal growth, focusing on one’s self will show the most improvement in the long run.

Envy At A Glance