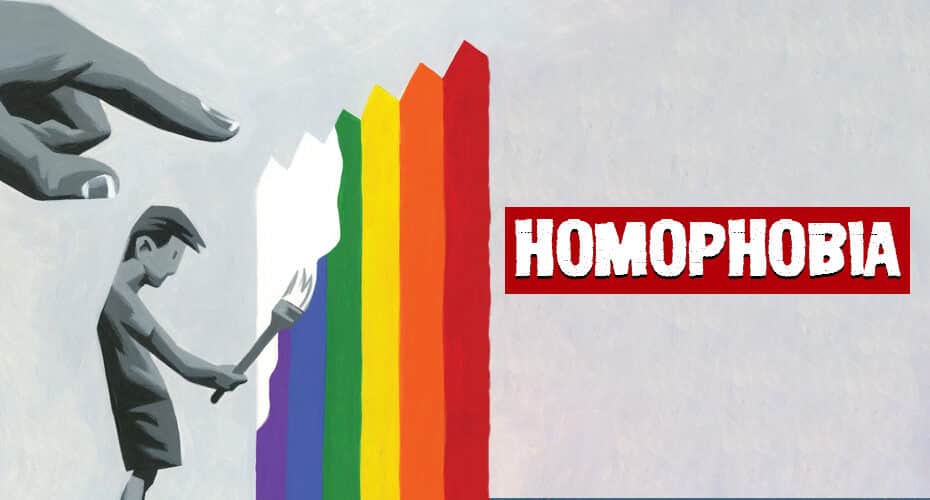 Homophobia refers to the negative, regressive, and discriminatory attitudes and practices directed at the LGBTQ+ community. It is characterized by prejudice, hate, fear, and misunderstanding towards people with “unconventional” non-heterosexual gender identities.

The concept “homophobia” refers to1 “a range of behaviours, feelings, negative attitudes towards sexual variations and people identified or perceived as LGBTQI.” It is also known as transphobia, homoerotophobia, homonegativity, heterosexism, and sexual prejudice.

The term “homophobia” was coined in the 1960s by George Weinberg 2, a Jewish-American psychologist. It combined the word homosexual with the Greek phobos meaning “fear or aversion”. It came to mean the negative, regressive, and discriminatory attitudes and practices voluntarily directed at the “LGBTQ+” community comprising lesbian, gay, bisexual, transgender, queer, and other gender fluid individuals with gender non-conformity identities, roles, and expectations.

Homophobic behavior and practices are characterized by prejudice, contempt, hatred, antipathy, irrational fear, aversion, and discrimination on the basis of sexuality and gender. It is deep-rooted in conservative religious, political, socio-cultural, and pop-cultural notions and relies on these factors for survival.

In the 1960s, homosexuality was considered a “mental illness” subject to ‘treatment’ by therapy, electric shock, institutionalization, etc. Thankfully, the recent decades have seen inclusive changes in our approach towards gender concepts and rights.

Nonetheless, homophobia—with its long-drawn history and ready sanction—continues to be a source of human rights violation, discrimination, and violence across the world. Recent research 3 shows that homophobia is a serious social problem, with extremely damaging, long-term consequences for the physical and mental health of members of the LGBTQ+ community.

What Are The Types Of Homophobia?

Research 1 shows that there are four distinct types of homophobia:

A 2016 study 4 defines internalized homophobia (IH) “as when a sexual minority person has negative feelings and homophobic attitudes towards themselves and others who are sexual minorities, as a product of social bias”. It is inherently connected to external experiences of marginalization.

A person suffering from IH:

Interpersonal homophobia manifests itself in various forms, depending on how individuals conceptualize and practice homophobia. However, its more common types include:

Lesbophobia is homophobia directed toward lesbians or women who are attracted to women.

It is homophobia directed at trans-sexuals and the larger transgender community.

Institutionalized homophobia, according to a 2021 study 1, is the homophobia displayed by institutions or organizations “based on specific cultural, religious as well as prevalent ideologies.” It has two subtypes:

State-sponsored homophobia usually involves homophobia directed by nation states towards their own citizens. This includes:

Social homophobia involves the homophobia displayed by communities, typically on the basis of regressive religious beliefs and practices. This type of homophobia is usually associated with Islamic communities operating under Sharia Law and Christian communities.

However, in recent years, world religions are displaying 6 “a variable approach to the theme of sexual variations with a range of degrees of acceptance.”

Cultural homophobia refers to the homophobia espoused in popular culture. It is based on prevalent socio-cultural notions of sexuality and conventional gender norms and is usually transmitted through media like:

What Are The Signs Of Homophobia?

A person or an institution is homophobic when he/she/it espouses:

Why Does Homophobia Exist?

Homophobic attitudes, behavior, and practices have a long drawn history, fuelled by religious, political, and cultural values and beliefs over centuries. Research 11 attributes the common causes of homophobia to:

Homophobia relies on religion, ‘conservative’ religiosity, and religious beliefs and literature for its perpetration and prevalence. Research 12 reveals that most religious denominations across the globe condemn homosexuality and gender non-conformity by taking proscriptive action against sexual minorities. These include:

Recent studies link homophobia to gender prejudices and glorified cultural notions of social heteronormativity, masculinity, patriarchy, etc. Such regressive ideologies, according to a 2021 study 1, unhealthily encourage “an exhibition of heterosexual behaviours, congruent with the heteronormative culture, with a distancing from gay people.”

In cases of state-sponsored homophobia, such socio-cultural notions are given a political dimension and carefully embedded in the state’s political ideologies, thoughts, and legal procedures.

Such people consider homosexuality to be abhorred and sinful behavior and their homophobia arises from the guilt or denial of harboring such tendencies themselves. Studies 14 also frequently associate people with such repressed homosexuality to higher incidences of sexual assault and sexual crimes (like pedophilia, etc.).

What Are The Impacts Of Homophobia?

A 2007 study 3 confirms the association between high homophobic and discriminatory attitudes and a large number of “stress processes, including the experience of prejudice events, expectations of rejection, hiding and concealing, internalized homophobia, and ameliorative coping processes.”

Consequently, recent studies 1 have sounded the warning bells on the higher prevalence of physical 15, mental, and/or somatic disorders in LGBTQ+ people, in comparison to their heterosexual peers.

Such disorders negatively impact their quality of life, career opportunities, financial health, and social development and relationships in the long run.

For instance, a 2001 study 16 linked homophobia to extreme poverty, diseases, and crime in bisexual and gay Latino men in the American cities of Miami, Los Angeles, and New York.

According to experts 3, ‘sexual minority’ 17 and social stress 18 from homophobia results in:

Homophobic behavior and practices are rampant across the world owing to hateful propaganda and misunderstanding that surrounds the gender “spectrum”. Despite the slowly changing conversation around sexual orientations, the long-term effects of homophobia are lingering and damaging.

However, we must not cease our efforts in our fight against homophobia. We must continue in our efforts with the Pride motto “Together, we Resist, Support, and Heal”!

1. Addressing our ‘own’ homophobia

Because of the prevalent heteronormative culture, we inculcate homophobic perspectives from a very young age. This internalizes homophobic attitudes in us and we find it difficult to address as adults even if we know that homophobia is wrong and irrational.

We can address our own homophobia by:

2. Addressing homophobic behavior around us

We can address homophobic behavior around us, by:

3. Interacting with people from the LGBTQ+ community

Communicating and interacting with members of the LGBTQ+ community, including its activists, can help us better understand the issues faced by the community.

When adequately informed about their rights and issues, we can help them in their fight against homophobia by:

We can raise awareness about LGBTQ+ rights and issues by “starting the conversation” against homophobia. We can do this by:

Both sexuality and gender are ‘conceptually’ a spectrum, so, to stick to compartmentalized sexual and gender identities is irrational. To fuel negative and anti-social behavior on the basis of such a narrow and regressive mindset is wrong on all levels of human thought and behavior.

Akin to racism, homophobia is a social problem and stands as a serious violation of human rights and values. The effects of homophobia are damaging and long-drawn, and so it should be effectively addressed to make the world a better place.

Homophobia At A Glance