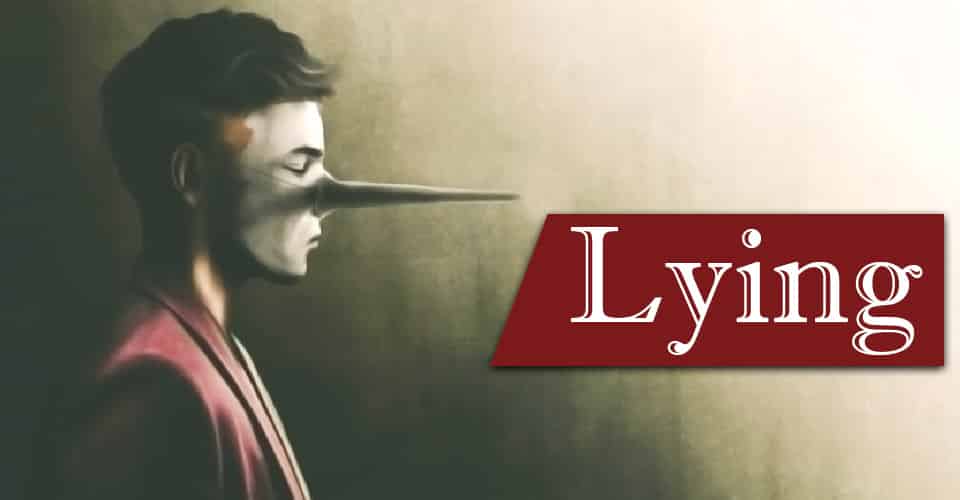 Lying refers to making an untrue statement to deceive someone. It occurs when a person misleads or falsifies people intentionally.

Lying occurs when a person is untruthful, deceiving, or makes false statements. It is about a person making a deliberate choice to mislead others without giving prior information of that intention. Telling lies is considered a form of social behavior and also an integral part of our day-to-day communication. Certain instances of dishonesty may not fit under the definition of a lie, while some instances do. An untrue statement is not a lie until it is intended to deceive. When someone omits information with the intent to deceive, it can also be considered a lie. Meanwhile, technically correct languages with an intention to mislead people may also be viewed as a lie. Falsifying is about giving false information to others despite knowing it to be false. In specific instances, people not only lie for their personal gain but also for others’ benefit.

A lie is a way of deceiving someone verbally and is an important part of our behavioral response in communicating with others. There are three criteria that must be met for a lie to occur –

A 2015 research paper 1 suggests, “Lying can be explained by different psychological principles of psychodynamic theory, humanistic theory, and behavior theory.” This study explains that a person’s desire to lie arises from a specific human nature to avoid emotional pain and increase pleasure. The differences between falsifying or misleading someone largely depend on its severity, frequency, and the reasoning behind it. A lie of omission occurs when a person simply remains silent with a deceptive intention. The desire to mislead someone can take two different forms, including:

Lying At A Glance

What Is Pathological Lying?

When a person starts to lie more frequently than others without any proper reason, it can be a matter of concern. A 2005 study explains that it can cause a psychological condition named pathological lying. Most pathological liars find it very difficult to control their habit of lying unnecessarily. Mostly, people can identify pathological liars as they often display visible insecurity and lack of confidence. It does not depend on how significant the lie is or the reason behind it. An unhealthy lie affects people’s ability to trust a person.

Pathological lying is associated with several psychological disorders, such as:

Individuals with Munchausen’s syndrome 5 may often indulge in uncontrollable, pathological lying regarding their medical history or symptoms only to increase the curiosity of the listener.

Studies 6 have shown that pathological liars may experience certain symptoms of depression and anxiety.

As people with BPD 7 experience incredibly intense emotions, such as shame and guilt, and are more likely to be impulsive, they tend to tell lies more frequently to avoid several overwhelming situations.

Research 8 says that the exaggerated sense of self-importance in people with NPD can be manifested in boastful lies about their social connection, career, and personal achievements.

People with this personality disorder 9 often tell lies to gain status or to manipulate others.

People lie for various reasons, such as to avoid trouble and escape from responsibilities. They usually fear the possible consequences or threats occurring when the truth is revealed. That’s why they try to find solutions in the form of lies. Research 10 says that 40% of young adults have reported telling lies at least once or twice per day. According to hedonistic nature 11 , people are concerned with maximizing their mood when they feel very bad or very good about something. Hedonistic nature allows an individual to undertake less pleasurable yet necessary activities when he/she is in a more neutrally effective state. It refers to the view that all human action is influenced by desires for pleasure and the avoidance of pain.

The psychology of lying is an extremely complex concept. The cause behind someone’s lie is associated with what induces the person not to tell the truth. Some people lie to avoid punishment, while others may lie to avoid hurting someone’s feelings. There are some people who tell lies only out of their impulse. The reason behind a lie can be related to an issue of survival also.

A 2017 research paper 12 suggests that a liar’s mindset and attitude is interlinked with several negative consequences that include:

Regardless of the cause, it is a very unpleasant feeling to find out that someone has lied to us. One should learn how they can detect when someone is lying. If a person becomes habituated to tell lies more frequently, people should support him/her to get proper treatment for any underlying psychological condition.

Lying allows people to gain a perceived control over the situation by using manipulation. It works as a defense mechanism that prevents people from being vulnerable and not revealing their true selves to others. When a person lies and gets rejected by others, there is a proper reason for him/her being rejected. Meanwhile, when an individual reveals the truth but gets rejected, they might think that they are fundamentally disliked which can negatively affect their self-esteem.

The habit of falsifying can also be an outcome of people’s past experiences. People who had an abusive childhood are more likely to create a world of their own. They tend to imagine more and lie for their own pleasure and happiness. The concept of lying is mostly used by people in order to avoid difficult situations as well as not to face certain emotions, including guilt, shame, depression, sadness, anxiety. People with low self-confidence find it extremely difficult to deal with these feelings. Telling lies helps these people to avoid such situations in which they would have to deal with these overwhelming emotions. Another common reason for telling lies is the fear of hurting someone’s feelings. Some people fear dealing with the feelings that come with disappointing others.

There is no such specific method to identify whether someone is telling lies or not. One needs to pay close attention to that person particularly. There are some signs through which one can detect liars.

There are five primary types of lying that includes:

Besides these five primary types, the concept of lies can be divided into four different colors, such as:

A 2020 study 13 explains that, when a person tells lies occasionally to avoid hurting someone else’s feelings or uncomfortable social situations, these lies are usually known as white lies because they are not intended to harm someone. While lies mostly consist of exaggeration of the truth or partially false information.

Most of the lies people tell in daily life are gray lies. Studies 14 have shown that these kinds of lies are mostly intended to help others as well as protect oneself from a threat. These lies are very complicated to clarify and often tend to be about serious or self-serving matters. These are less likely to be socially acceptable than white lies.

Black lies involve simple and callous selfishness. People tell these types of lies either to get themselves out of trouble or to gain something they desire. These are often considered harmful to others.

According to 2015 research 15 , these lies are more about revenge and spite. When people lie for malicious reasons and the lies involve serious consequences for others, these lies are known as red lies. Such lies often lead to several unfair situations. Red lies are considered the ‘real lies’ and completely socially unacceptable.

Lying is a very common part of our behavioral responses in everyday communication. People lie for various reasons, either for their own good or to avoid hurting someone’s feelings. A lie can also be used in the most negative manner, such as for taking revenge or causing harm to someone. Telling lies is not always about providing untrue information. If a person doesn’t give enough information that he/she has or provide half of the truth, it is also considered a lie. Most people tell lies as a defense mechanism to avoid certain overwhelming emotions, such as shame, guilt, or disappointment. When a person’s habit of misleading others negatively affects their own or other’s well-being, it can be a matter of an underlying psychological condition. If you detect that one of your loved ones is becoming habituated to lying, encourage them to seek treatment.