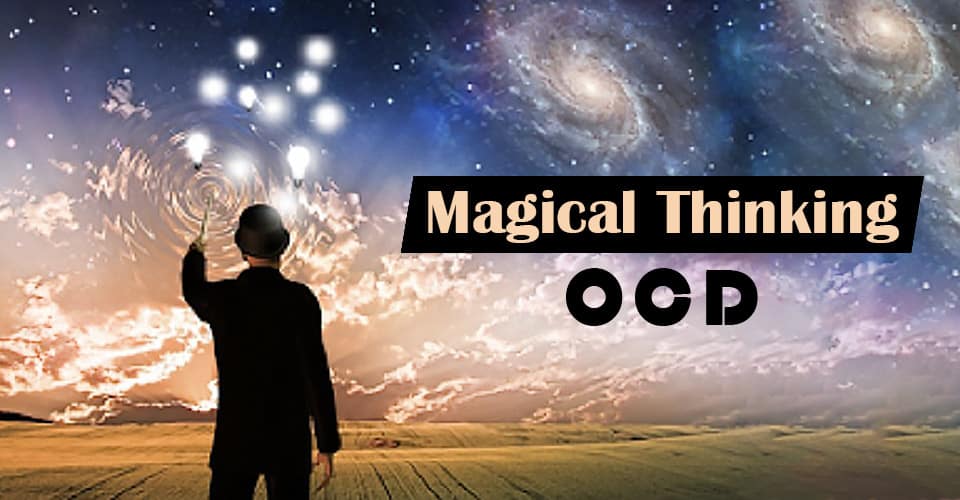 People with obsessive compulsive disorder (OCD) often believe that their thoughts and ideas have a significant influence on certain events in the material world. This specific mental health condition of OCD patients is known as magical thinking OCD.

What Is Magical Thinking OCD?

Obsessive-compulsive disorder (OCD) refers to an interesting psychiatric condition that traps the sufferers in certain cycles of obsessions and compulsions. A 2010 research paper 1 suggested that magical thinking is the root of many OCD sufferers. This study has shown that magical beliefs remain associated with OCD symptoms even after controlling general negative affect. It elaborated that magical thinking and obsessive-compulsive disorder have an interesting relationship. Because the sufferers are often quite aware of their distorted thinking that compels them to perform unrealistic rituals and practices. Despite knowing they use it to manage their anxious and obsessive thoughts.

One of the interesting parts of OCD is that the sufferers tend to twist certain common practices into abnormal rituals. But these practices never seem to satisfy their impossible demands. Magical thinking is a kind of cognitive distortion that allows people to believe in the existence of spiritual or supernatural beings. When the foundation of obsessive-compulsive disorder is related to the thought error, the experience of the sufferer can be termed as “Magical thinking OCD”. People who suffer from obsessive-compulsive disorder engage themselves in a type of magical thinking. Because of OCD, obsessive thoughts cause them to engage in intensive compulsions to stave off their thoughts. Research 2 has found that the sufferers often think that they have an expanded sense of responsibility to others and their thoughts can prevent certain negative outcomes. It mentioned that most OCD patients experience a hyper-responsibility syndrome that forces them to consider themselves responsible for their own thoughts and the consequences of not controlling them.

A 2007 study 3 explained that this kind of thought process is associated with the concept of magical thinking. It allows OCD sufferers to feel more in control. OCD patients often tend to practice several unrealistic rituals despite knowing how illogical and irrational their behaviors are. However, it is quite difficult to separate the OCD symptoms from developmentally normal child rituals as superstitious beliefs and magical thinking is a part of children’s natural development.

How Magical Thinking Related To OCD

Magical thinking is related to obsessive-compulsive disorder for two significant reasons, which are described below:

The concept of magical thinking is considered to be one of the significant symptoms or signs of Magical thinking OCD. This mental disorder allows people to experience a hyper-sensitivity related to the health and safety of themselves as well as others. It seems like an enhanced perception of personal duty to the sufferer. This condition transforms into a fear that their thoughts, actions, and wishes can magically influence their real-life outcomes.

2. Symptoms of other OCD subtypes

Magical thinking does not always refer to only a sign of OCD. Sometimes, it may be a symptom of other subtypes of obsessive-compulsive disorder. For example, some OCD sufferers may believe that they have a certain disease just because the thought popped up in their head. Some OCD patients may think that it can cause a negative outcome if they say an unlucky number out loud. Some may imagine certain incidents or events and believe that those events are happening in reality. However, magical thinking, as a sign of obsessive-compulsive disorder itself or a symptom of other subtypes, is considered to be an extremely important component of OCD.

Studies 4 suggest that magical thinking is associated with several important psychotic disorders. The research explained how it plays the significant role of a central cognitive construct in OCD. There are primarily three sub-types of magical thinking OCD, such as:

It’s a kind of belief that the sufferer’s thoughts, impulses, and feelings of the sufferer are capable of causing him/her to commit undesirable actions. For example, if someone thinks about violent harm, he/she will lose control and act it out.

People with this disorder tend to believe that their thoughts and impulses can have a significant impact on real objects. This condition can contaminate others sometimes. For example, if someone has an intrusive negative thought while holding any object, the object becomes negative and anyone who touches it will also be negative.

It’s a kind of thought that a specific feeling or impulse can cause a particular event to occur. For example, if someone thinks about a negative incident, the incident will happen in reality.

This mental illness consists of certain unreasonable and irrational thought patterns. According to researchers 5 , these thinking errors can be characterized by connecting the thoughts and incidents that have no association. People with this mentality often find themselves fearful and preoccupied with ensuring the safety and wellbeing of others. Magical thinking with OCD can be identified and diagnosed by various symptoms along with a few obsessions and compulsions.

The following are some of the most common symptoms of this mental disorder:

The thought error often invites pretty much limitless obsessions. The most common obsessions include:

The ultimate motive of magical thinking compulsions is to prevent negative outcomes. The most common compulsions include:

There is no definite origin of magical thinking OCD but researchers have identified certain reasons related to the development of this disorder. The following are some of the potential causes of this mental illness include:

A 2011 research paper 6 has described that the brains of OCD patients are quite abnormal in structure and function in comparison with normal people. According to studies 7 , the frontal parts of the human brain are responsible for the entire communication process. People with OCD have different kinds of neurotransmitters that are quite overactive. Excessive glutamate 8 and too little serotonin may cause human miscommunication.

Studies 9 have shown that genetics play a huge role in OCD. The obsessive-compulsive disorder tends to run in families. It is not even limited to families only, people with autism and anxiety are more likely to experience this mental disorder. A 2011 research paper 10 has found that 7%-15% of OCD patients have a link with one of the family members.

This mental illness is associated with a behavioral error that turns OCD into a full-fledged disorder. That’s why behavioral conditioning 11 is extremely crucial to this disorder. OCD patients can’t survive without practicing the rituals due to the extreme dependency on their compulsions.

People who suffer from magical thinking OCD should take their mental condition seriously and seek treatments from a mental health specialist immediately. It cannot be cured, but one can prevent this disorder from deteriorating. It can be treated in several significant ways. The most common treatments for this mental illness are:

Therapists suggest medications 12 to the sufferers only because the medicines help to make other therapies easier to perform. Medicines reduce the anxiety that leads to a successful treatment. However, medications are not enough to eliminate intrusive thoughts but they can make those thoughts less potent. The most vital part of this is to find the right kind of medication for a person, which mostly depends on the drug metabolism of the patients.

Acceptance and Commitment Therapy 13 (ACT) refers to a treatment that aims to make the patients accept their intrusive thoughts. The treatment helps the sufferers to observe their thoughts and practices without reacting. The treatment includes picturing intrusive thoughts on a screen or board. A patient should be psychologically flexible and non-judgemental, have self-compassion, mindfulness, and the willingness to face fears for this therapy.

It is considered to be the most effective treatment of magical thinking OCD. CBT refers to Cognitive Behavioral therapy 14 that allows the sufferer to expose themselves to their distressing thoughts and then prevent themselves from practicing the rituals. Specialists argue that CBT performs well on people with OCD when accompanied by the treatment approaches of Exposure Response Prevention therapy 15 (ERP). ERP therapy makes the treatment easier. The treatment gets intense over time. Once the sufferers can stop themselves from practicing the superstitious rituals and responding to the thoughts, they experience a lot of relief from these frustrating OCD symptoms.

People with this disorder require professional treatment but certain lifestyle changes can help them to keep their symptoms in control. A 2012 study 16 suggested that healthy lifestyles can help to reduce the intensity of the symptoms by controlling the stress level of the patients.

The following are some of the beneficial lifestyle changes that the sufferers can adopt:

This mental disorder is not treatable without the help of any OCD specialist or professional therapist. But one can adopt certain coping strategies that may help to prevent the increasing symptoms. The coping techniques include:

Serotonin 17 is responsible for calming the overactive parts of the human brain. It is a neurotransmitter that plays a key role in the human brain’s functions. Several complex carbohydrate-rich foods 18 such as sweet potatoes and garbanzo beans are the best options for boosting the serotonin level. However, simple carbohydrates like pasta, bread, cookies, popcorn, pretzels won’t help in this matter. Because most of these food items increase 19 the feeling of anxiety that may lead to the symptoms of this mental illness deteriorating.

Studies 20 have found that exercise is very beneficial in reducing intrusive thoughts. Daily exercise shifts a person’s attention when his/her compulsions arise. It boosts 21 serotonin as well as distracts people from superstitious rituals and obsessive thoughts.

The treatment of magical thinking OCD aims to help the patients to gain control over their intrusive thoughts. The sufferer needs to beware of and identify the looping thoughts. People, who can actively stop those thoughts, develop more control over them.

Studies 22 explained that distraction works extremely well with OCD patients. If the sufferers can distract themself from the repetitive compulsions immediately, the thoughts and compulsions gradually start to lose control over them.

Occasional magical thinking is pretty much normal. But when it starts to trouble anyone’s physical and mental health, one should take it as a matter of concern. When the symptoms increase people with this mental disorder can harm themselves mentally and physically. They can even harm others. Certain essential resources can be spent on unimportant practices. However, anyone experiencing troublesome and disturbing magical thinking OCD should consult with a professional before things get worse.