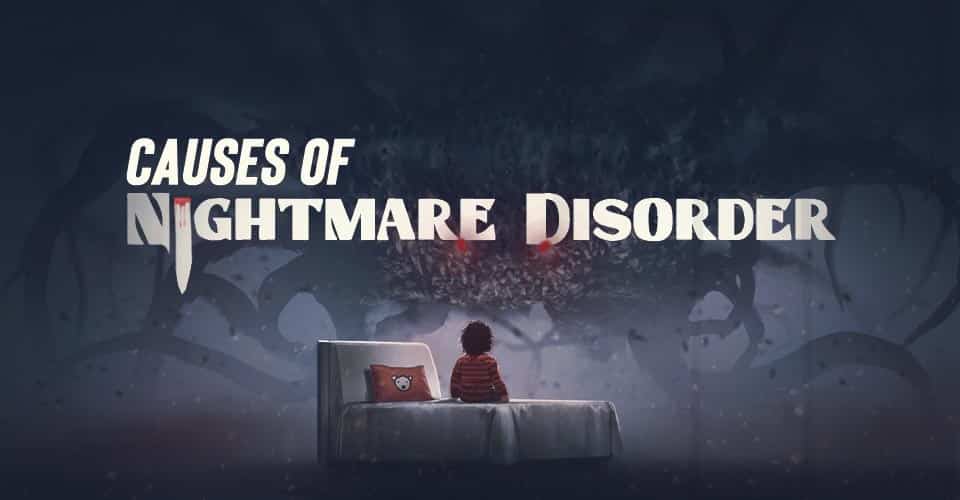 Nightmare disorder is a mental health condition characterized by severe dysphoric, terrifying and well-remembered dreams resulting in abrupt awakenings. The disorder may be caused by various factors like stress, trauma, genetics and other comorbid conditions.

What Is Nightmare Disorder?

Nightmares are disturbing or upsetting dreams that may be caused or influenced by a plethora of different factors. When nightmares occur repeatedly and for extended periods of time, then it may lead to nightmare disorder. Previously known as dream anxiety disorder, the condition is a sleep disorder and a type of parasomnia. Patients experience frightening nightmares that may vary in severity and frequency. It may cause disruptions in the sleep-wake cycle and lead to abrupt awakenings, making the sufferer instantly alert upon waking up. Hence, they may have difficulty going back to sleep. Nightmares typically tend to involve themes of threats to survival, security, or physical integrity. Although mostly, observed in children, adults may also be affected by the condition.

Understanding The Causes Of Nightmare Disorder

The exact cause of nightmare disorder is yet to be known. However, repeated nightmares often tend to have an underlying cause. Studies 1 reveal that “No models adequately explain nightmares nor have they been reconciled with recent developments in cognitive neuroscience, fear acquisition, and emotional memory.”

Although more research is needed to explain the precise causes of nightmares and the disorder, there may be some contributing factors that may influence its occurrence in someone. Here are some of the most common factors that may lead to the development of dream anxiety disorder:

Anxiety and stress are considered as major influencing factors for nightmares. Often, normal stress experienced in daily life, such as issues at school or work, household responsibilities, relationship problems or stressful life events, can trigger nightmares. Moreover, major negative life events such as unemployment, loss of a loved one, moving to a new city can also cause disturbing dreams. As anxiety tends to increase the risk of the condition, nightmares can be a result of emotional response to stress, anxiety, fear and trauma.

Researchers believe that dreams are a way for the human mind to process emotions and integrate memories. One 2019 study 2 highlights that “nightmares and bad dreams might represent an attempt to cope with adverse events, and the degrees of cognitive-brain maturation could impact on these mechanisms across the lifespan.”

PTSD patients often experience nightmares as intrusive/re-experiencing symptoms that may involve avoidance, arousal, dissociation and negative mood. “Post-traumatic stress disorder produces recurrent and repetitive nightmares,” explains a study 4. The sufferer may have repeated nightmares about the past traumatic event and have flashbacks. This can lead to sleep disturbance, hypervigilance and avoidance of triggers that remind them of the trauma. Another study 5 reports “The re-experiencing of a traumatic event in the form of repetitive dreams, memories, or flashbacks is one of the cardinal manifestations of posttraumatic stress disorder (PTSD).” Nightmares can also be experienced by a person affected with acute stress disorder (ASD).

A 2019 scientific analysis 6 suggests that the cause for the development of nightmare disorder may be associated with hyperarousal which accumulates during daytime and is sustained at nighttime. “Elevated hyperarousal is discussed as a central pathophysiological factor in PTSD,” which can explain the aetiology of nightmares. The study also highlights that impaired fear extinction can also be an influencing factor. The study adds that even though sleep and dreams can “enable fear extinction through a process of recombining fearful memories with novel and dissociated contexts, individuals with nightmare disorder continue to activate arousing memory fragments during sleep, reinforcing fear memories.” Hyperarousal & impaired fear extinction in people with dream anxiety disorder can be influenced by several factors, like –

As developmental stress and adverse experiences during childhood can impair fear extinction capacity, it can also be a determining factor for the onset of the condition. Negative childhood experiences can trigger “changes in mPFC–amygdala circuits” that are related to heightened threat perception 7 and dysphoric dreaming 8. As a result, childhood adversity can affect the development of emotion regulation and disrupt emotional expression, which may “reinforce the development of a fear memory.” This notion was expressed in the 2017 research paper 9 titled ‘The Stress Acceleration Hypothesis of Nightmares (SAH).’ Lead author and psychiatrist Tore Nielsen states “idiopathic nightmares are hypothesized to originate in early adverse experiences that lead in later life to the expression of early memories and emotions in dream content.”

The SAH model suggests that early childhood memories are often suppressed after the infantile amnesia period. However, disruption of infantile amnesia can influence cognitions, emotions & behaviors in later life, including expression of dangers and threats in nightmares. Moreover, changes in emotion regulation processes cause reduced fear extinction in REM sleep and any disruptions causes nightmares.

Nightmare disorder is often associated with a number of other mental conditions such as depression, borderline personality disorder and schizophrenia. Depression can often cause sleep disorders 10, such as nightmares, hypersomnia, and insomnia. A 2018 study 11 shows that nightmares can often manifest as symptoms of major depressive disorder and treating depression can not only improve sleep difficulties but may also reduce suicidal thoughts as well. Research 12 also shows that in depressed people, “Feeling worse in the morning than later in the day may be related to the intervening dream content and affect and predict suicidal tendency.” Nightmare disorder is also common among patients with dissociative disorders (DD) with a prevalence rate of about 57% of DD patients. A 2003 study 13 revealed, “Among patients with DD, those with ND had a higher rate of self-mutilative behavior, a history of suicide attempt in the last year, and comorbidity with borderline personality disorder than those without ND.”

Another 2008 study 14 reveals that patients with borderline personality disorder (BPD) experience higher levels of dream anxiety. The study states “BPD patients suffered a significantly greater rate of nightmares, elevated levels of dream anxiety, and disturbed sleep quality,” than others. Moreover in BPD patients, heightened dream anxiety is associated with higher incidences of early traumatic experiences. People with schizophrenia or psychosis are also prone to having frequent episodes of nightmares. According to a 2015 study 15, 55% of patients with psychotic symptoms reported distressing nightmares on a weekly basis. It states “Nightmares might be common in those with psychosis and are associated with increased day and nighttime impairment.”

Nightmares are also associated with personality disorders. “Frequent nightmares were independently related to the neuroticism personality trait, irrespective of psychiatric diagnosis,” states a 2010 study 16. Apart from these, disturbing and terrifying dreams are associated with higher levels of paranoia, hallucinatory experiences and depersonalisation reveals further research 17. Nightmares are also found to be linked with different medical conditions, like cancer, heart disease, restless legs syndrome, sleep apnea and other sleep disorders.

It has been observed that individuals who have a first-degree relative with nightmare disorder are more likely to develop the condition. The condition may run in families 18 and indicates a role of genetic factors 19. One 2012 study 20 has found that sleep disorders are often caused by “complex interactions between genes and the environment.” A 2019 study 21 has found that nightmares are often related to parental bonding styles, but precise connections between family relationships and nightmare experiences is yet to be identified. The researchers state “Our study has demonstrated that the inappropriate family relationships were linked with different aspects of nightmare experience, especially in nightmare disorder patients.” However, more research may be required to establish this theory.

Nightmare disorder may also be influenced by different medication and misuse of alcohol and recreational drugs or withdrawal from substances. Medications which change the neurotransmitter levels of the central nervous system can cause intensely frightening dreams. Medications like beta blockers 22, antidepressants, anesthetics, antipsychotics, antiepileptic agents, blood pressure medicines, Parkinson’s disease medicines or medication to quit smoking and other non-psychological medicines can often trigger nightmares. A 2003 research 23 found that “Pharmacological agents affecting the neurotransmitters norepinephrine, serotonin and dopamine are clearly associated with patient reports of nightmares.”

One study 24 reveals that “sedative/hypnotics, beta-blockers, and amphetamines are the therapeutic modalities most frequently associated with nightmares.” Moreover, dopamine agonists may also cause this condition “with dopamine receptor stimulation as a possible pharmacologic mechanism.” Another study 25 found that lipophilic beta-blockers can cause nightmares and hallucinations in patients. Antidepressants can also induce or worsen sleep disorders like nightmares and REM sleep behavior disorder. “Although antidepressants are recommended for the treatment of post-traumatic sleep disorder, they can induce nightmares,” explains a 2017 study 26. Moreover, withdrawal from “drugs affecting GABA and acetylcholine, can also be associated with nightmares,” according to a 2010 research paper 27.

Narcotics which affect the chemicals in the brain can also influence the severity of the disorder. Withdrawal from medications, such as benzodiazepines 28 and ethanol can result in REM sleep rebound and cause nightmares. Withdrawal from substances, including tranquilizers, alcohol and drugs can also have the same effect. This is why it is crucial to inform your doctor about any medication or drug you may be taking during the time of diagnosis and treatment.

Changes in the sleep schedule and sleep disturbances that reduce or interrupt the quality and amount of sleep or cause abnormal sleep-wake times can also increase the risk of experiencing nightmares frequently. Studies 29 have found that insomnia is also associated with repetitive nightmares and abrupt awakenings. The researchers state “intermittent or early waking insomnia is sometimes associated with nightmares.” However, it has not yet been confirmed whether sleep deprivation can cause nightmare disorder.

Books, movies or video games that have scary, terrifying or disturbing themes are also linked with causing nightmare disorder. For certain individuals, watching horror movies or reading ghost stories, particularly before bed, can result in repeated nightmares. A 2013 study 30 found that children exposed to terrifying images showing real or fantastic situations and entities can cause nighttime fears and issues with fantasy-reality differentiation.

A 2019 research suggests that certain maladaptive beliefs may also play a contributing role in the development of nightmare disorder. The researchers state that recent studies focusing on the “volitional attempt to suppress unwanted thoughts and feelings (thought suppression) finds that such attempts increase the likelihood that the suppressed thoughts 31 reoccur in a person’s dreams, especially those in REM sleep.” Moreover, research 32 also reveals that deliberately avoiding external and internal stimuli can lead to repeated nightmares. Hence, intentional thought suppression can trigger and influence the onset of nightmare disorder as well.

Apart from the reasons mentioned above, there are some other risk factors which can cause nightmare and lead to the development of dream anxiety disorder, such as:

How Nightmare Disorder Can Affect You?

“Frequent nightmares can pose a serious clinical problem,” explains a 2017 study 33. When left untreated, repeated nightmares can adversely impact your mental and physical well being. Nightmares awaken the sufferer from rapid eye movement sleep 34 (REM sleep or REMS) and cause chronic sleep disturbances leading to insomnia. Studies show that 2-8% of people have recurrent nightmares while 50-85% of people have at least one nightmare occasionally.

Nightmare disorder can “cause clinically significant distress or impairment in social, occupational or other important areas of functioning,” as per a 2019 study 35. It can also cause severe anxiety and depression in some people along with other psychological ill effects. In extreme cases, nightmares can also cause suicidal ideation 36 and behaviour. Moreover, sleep avoidance and deprivation, usually caused by nightmare disorder, can result in different conditions, including heart disease, obesity etc. When left untreated, the condition can significantly affect your personal, professional and social life.

Hence if you are experiencing frequent nightmares, then make sure to consult a doctor or a mental health professional to diagnose your symptoms and receive medical care immediately.