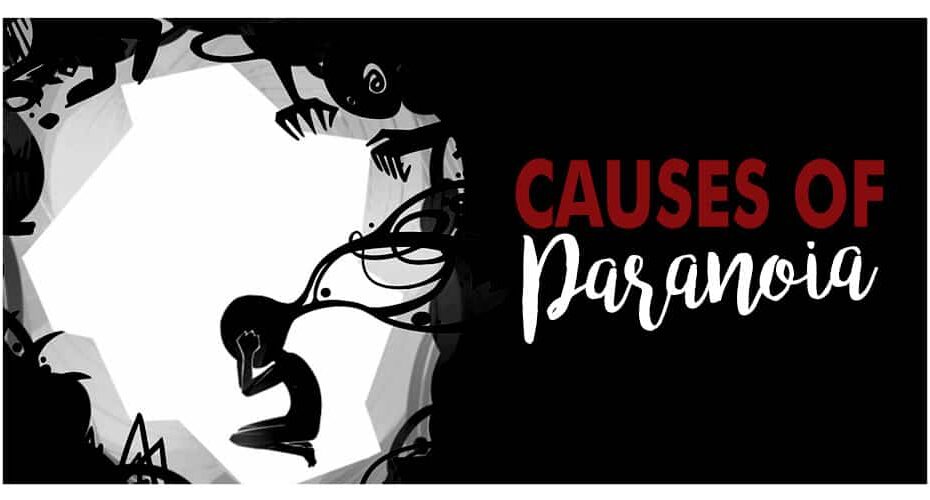 There are a number of theories and explanations regarding what causes paranoia as the precise factors leading to this thought disorder is yet to be identified. However, understanding the causes of paranoia is highly important for treatment and recovery.

The exact causes of paranoia are not yet known. However, we can have paranoid thoughts for a number of different reasons that are not necessarily related to mental health conditions. Feeling paranoid is a common human experience and may be mostly felt by individuals who are prone to being mentally or emotionally vulnerable. We often become paranoid when we are unable to reason with something or allocate meaning to certain occurrences. For instance, some of us may feel vulnerable while walking alone down an empty street at night. We may falsely believe that we are being stalked, watched or followed, even though that may not be true. Such thoughts often occur when we are experiencing intense stress or believe that others are trying to harm, abuse or take advantage of us.

However, some of the most common probable causes of paranoia include –

It is also likely that a combination of all these causes may also lead to delusions and paranoid thoughts. According to a 2016 study 1 , persecutory delusions, considered as the severest form of paranoia, tend to develop “in the context of genetic and environmental risk, and maintained by several psychological processes including excessive worry, low self-confidence, intolerance of anxious affect and other internal anomalous experiences, reasoning biases, and the use of safety-seeking strategies.” Apart from these, a lack of sleep can also be a prominent reason for having irrational and unrealistic thoughts and ideas. Although most paranoid thoughts fade away with the situation, when such thoughts cause severe symptoms it can lead to problems and affect daily functioning.

An evolutionary review 2 of the thought disorder indicates that “Paranoia is increased by a wide range of brain injuries and impairments, including substance use, sleep deprivation, illness, traumatic head injury, and dementia.” Regardless, here are some of the factors that may influence the development of paranoia in someone:

Genes are regarded as one of the primary causes of paranoia. Although there is limited and inconclusive research on the topic, certain studies 3 indicate that there is a link between genetics and this thought disorder. If there is a genetic predisposition, then paranoid thought can be inherited, especially in first degree family members. According to a 2006 study 4 , there is a strong correlation between paranoid disorders and the human leukocyte antigen (HLA) class I alleles, particularly in people with delusional disorder and paranoid schizophrenia. The researchers stated that there may be “a possible immunogenetic etiology of these paranoid disorders.”

Certain brain chemicals or neurotransmitters regulate our thoughts and emotions. The inhibitory neurotransmitter is usually involved in the pathology of certain mental disorders involving paranoia such as schizophrenia. One 2014 study 5 study states “Dopamine abnormalities in the mesolimbic and prefrontal brain regions exist in schizophrenia.” Research 6 also indicates that delusions are caused by abnormalities in brain circuits that define hierarchical predictions and responses to prediction errors. Researchers believe that “Defects in these fundamental brain mechanisms can vitiate perception, memory, bodily agency and social learning such that individuals with delusions experience an internal and external world that healthy individuals would find difficult to comprehend.”

Substance abuse is perhaps one of the most common causes of paranoia. Paranoid thoughts can often get worse or triggered by the use of certain medications, alcohol and illegal drugs. Research 7 shows that antidepressants, like serotonin reuptake inhibitors, fluoxetine and amitriptyline, are related with paranoid thoughts in psychiatric patients. Moreover, consumption of other hard drugs like LSD, PCP and methamphetamines can also result in paranoid thoughts. “Certain drugs such as cocaine, marijuana and amphetamines alter brain chemistry and can bring on paranoid thoughts, feelings and behaviours,” explains Better Health Channel, Department of Health & Human Services, State Government of Victoria, Australia.

One study 8 reveals that about 68% to 84% of people using cocaine experience paranoid thoughts which may last for a few hours, days or even weeks. Scientific analysis 9 also suggests that prior use of cocaine is clinically associated with suspiciousness, which is a harbinger of paranoid reactions. Moreover, around 29% to 53% people using cocaine also experience hallucinations and delusions. Healthdirect Australia adds “Cannabis and amphetamine abuse often causes paranoid thoughts and may trigger an episode of psychosis. Other drugs such as alcohol, cocaine and ecstasy can also cause paranoia during intoxication or withdrawals.”

Certain adverse life events during childhood abuse, trauma, neglect or abandonment can affect how we think, identify emotions and express ourselves throughout our lives. Severe negative life events can affect our thoughts processes and lead to suspicious beliefs and paranoid thoughts in certain individuals.

One of the most recognized causes of paranoia is stress and anxiety. Excessive and ongoing stress can also result in paranoia. It has been observed that people under severe and persistent stress, like prisoners of war, often become paranoid. One 2016 study 10 reveals that “Paranoia and subjective distress increased with degree of social stress in the environment.” Social factors, like childhood social adversity, urban birth, local ethnic density and even social disorganization can trigger this condition as well.

Another 2008 study 11 found that social anxiety and persecutory ideation may also lead to such delusional beliefs. “Non-clinical paranoia may be a type of anxious fear. However, perceptual anomalies are a distinct predictor of paranoia,” explains the study. When we feel anxious, certain abnormal internal feelings may be experienced in social situations which can result in delusions.

Research 12 reveals that “Many biological conditions like substance use, medical conditions, neurological conditions can cause delusions.” Certain psychiatric conditions, like paranoid personality disorder or schizophrenia, are also considered important causes of paranoia. Mental health conditions can often lead to paranoid thoughts or make the symptoms of the thought disorder worse. Paranoid personality disorder 13 can often result in clinical paranoia. Schizophrenia can make it difficult for the patient to distinguish between their reality and imagination. One 2016 study 14 explains “Paranoia is a common symptom of schizophrenia that may be related to how individuals process and respond to social stimuli.”

Borderline personality disorder, Post Traumatic Stress Disorder (PTSD), Alzheimer’s disease & other types of dementia 15 are associated with causing paranoid thoughts in some patients. Mood disorders 16 , like anxiety, depression and phobias, can also influence the onset. However, it is not necessary that every paranoid person will have a psychiatric disorder.

Lack of sleep and insomnia are also common causes of paranoia and delusional thoughts. Sleep deprivation can impair brain function and make us feel tired, limiting our abilities to reason. According to a 2007 study 17 , sleep deprivation, chronic partial sleep restriction and prolonged wakefulness can adversely affect our cognitive performance, attention, long-term memory and decision-making abilities. “Without sleep, our cognitive and emotional abilities become markedly disrupted,” states a 2017 study 18 .

Further research 19 provides evidence that severe sleep deprivation and restriction causes hallucinations, delusion, illusion, metamorphopsia, cognitive distortion, and misperception. The researchers explain that “Psychotic symptoms develop with increasing time awake, from simple visual/somatosensory misperceptions to hallucinations and delusions, ending in a condition resembling acute psychosis.” Another 2009 study 20 has found that insomnia is one of the potential causes of paranoia stating that “insomnia may contribute to the formation and maintenance of persecutory ideation.”

Apart from the probable causes of paranoia, there are other risk factors that may increase the likelihood of a person to develop persistent paranoia, such as:

Identifying the causes of paranoia is a crucial step towards recovery. If you are having paranoid thoughts and delusions, it is best to consult a doctor or a mental health professional immediately as it may indicate some underlying psychiatric disorders. Although your paranoia may prevent you from seeking help, it is crucial that you talk to a trusted loved one or a healthcare professional to develop healthier thought patterns and live a better, more meaningful life.