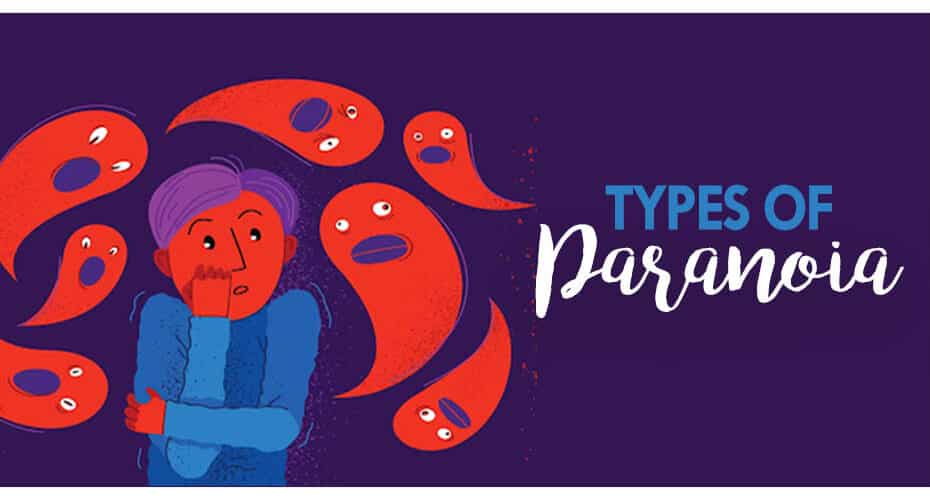 Paranoia is a distorted thinking pattern and an instinctive feeling that causes delusions and irrational beliefs. There are different types of paranoia and identifying them is crucial for effective treatment and overcoming symptoms.

Paranoia is “a mental state characterized by an individual’s correct observation from an incorrect or mistaken premise, leading to the development of a logically constructed, systematized and persistent series of persecutory delusions 1 , like being maligned, poisoned or conspired against,” explains Mind Help. It can lead to unrealistic worries, suspicious thoughts, distrust and feelings of threat even when there are none in reality.

The type of paranoid thoughts are mainly determined by the intensity of the associated symptoms. If it is usually experienced by most people in general, like fearing about the occurrence of crime, then it will likely result in mild distress. However, if a person has severe symptoms and believes they are being followed, tracked, observed or someone is trying to control their mind, then it can affect their ability to function effectively in daily life. It can also leave them feeling afraid, anxious, exhausted and isolated.

Clinical paranoia is primarily categorized into 3 main conditions, which are explained as follows:

This condition is regarded as one of the milder types of paranoia. People affected by paranoid personality disorder (PPD) tend to have a strong mistrust of people and the world in general, yet they can function normally on a daily basis. According to a 2009 study 2 , PPD is primarily marked by “a pervasive pattern of mistrust of other people, frequently occurring in conjunction with a hostile interpersonal style, emotional coldness, hypersensitivity to criticism, and rigidly held maladaptive beliefs about others’ motives.” Research 3 indicates that altered amygdala functioning is associated with this mental disorder.

The symptoms, behavior and attitudes related to this personality disorder tend to be present for a long time as onset can occur during childhood. People with such personalities often experience abuse during childhood and may even develop mistrust and suspiciousness as a learned behavior. However, the behaviors, attitudes and symptoms related to this condition are only noticed when they become obvious. These individuals are highly reluctant to seek treatment as they tend to be excessively suspicious.

Paranoid disorder or delusional disorder, one of the major types of paranoia, is a serious psychiatric disorder that can severely impair a person’s ability to function in daily life as they cannot distinguish between what is real and what is not. Delusional disorder is categorized as a psychotic disorder 4 . Someone affected by this disorder finds it hard to identify reality. The patient may experience intense irrational suspicions and beliefs which they consider to be true. Such beliefs often appear to be bizarre, impossible and outlandish. However, often these can seem possible or non-bizarre, even though they are still false beliefs.

Paranoid individuals mostly tend to have persecutory delusions as they believe they will be harmed by others. A 2014 study 5 states “Persecutory delusions are a central psychotic experience, at the severe end of a paranoia spectrum in the general population.” The person may believe that they are being stalked or spied upon or someone is plotting to kill them. Sufferers affected with this disorder can also falsely believe that they have a serious illness even when doctors may reassure them repeatedly.

Paranoid schizophrenia is one of the severe types of paranoia and a form of psychosis characterized by substantial difficulty in interpreting reality. It is a subtype of schizophrenia and delusions of persecution are a primary diagnostic feature of this condition. Mind Journal explains that it is “a debilitating disorder characterized by frequent visual or auditory hallucinations and one or more delusions. It is a defunct subtype of schizophrenia that involves extreme paranoia.” Individuals suffering from this form of paranoia have unrealistic delusions of persecution, jealousy or grandiosity. They may also experience auditory hallucinations like hearing unexplainable voices and weird sounds.

Certain patients with paranoid schizophrenia may also experience extremely bizarre delusions like believing that they are being targeted by the government or their thoughts are being transmitted across the media. They can also experience confused thinking and find it hard to find motivation to carry out daily tasks. This condition can seriously affect a person’s ability to function, when left untreated. Studies 6 have found that sufferers may experience intense impairment in social functioning and severe social cognitive bias.

Types Of Paranoia And Delusions

Apart from the 3 major categories of paranoia mentioned above, this thought disorder can be further sub-categorized into different types of paranoia & delusions. According to a study 7 , paranoid delusions mainly involves “experiences that can conceivably occur in real life, such as being followed (persecutory type), having a disease (somatic type), being loved at a distance (erotomanic type), having an unfaithful sexual partner (jealous type), and possessing inflated worth, power, identity, or knowledge (grandiose type).”

Some of the most common types of paranoia include the following:

The sufferer tends to believe that they are a messenger of god and that the end of the world is approaching. They are usually preoccupied with religious thoughts and beliefs. A 2014 study 8 states “Religious themes are common across delusion categories and types, with between a fifth and two-thirds of all delusions reflecting religious content.”

An individual with this form of delusion tends to believe that another individual, mostly a celebrity or famous person, is attracted to them and is in love with them. A 2020 research 9 explains that it is “a delusion that another person, more frequently someone of higher status is in love with the individual.” Depending on the intensity of their paranoia, the sufferer may constantly try to make virtual or physical contact with the object of the delusion. This can often lead to certain dangerous behavior such as stalking.

This is one of the well-known types of paranoia where the person suffering from the condition feels that others are trying to harm them and they are surrounded by constant threat. This kind of delusion can make the individual believe that a stranger or a loved one is planning to harm or kill them, despite evidence to the contrary. They may also think that they are being spied upon or mistreated by others. This type of paranoid thinking can even make the person seek protection from legal authorities.

“An influential psychological model of persecutory delusions proposed that they are caused by a bias towards holding others responsible for negative events (an externalising attributional bias), preventing the individual from becoming aware of underlying low self-esteem,” explains a 2018 study 10 .

In this form, the person tends to have “A conviction of great talent, discovery, inflated self-worth, power, knowledge or relationship with someone famous or deity.” They believe that they are highly powerful or very important and possess an unrealistic and exaggerated sense of self-worth and self-identity. Such beliefs can often lead to persecutory paranoid beliefs as well. According to one study 11 , “psychotic grandiosity, like delusions of persecution, constitutes a major symptom in paranoid psychoses.”

The person falsely believes that they have the ability to reform or cure others who are suffering. It is considered as a type of narcissism and megalomania that is manifested as a personality trait in individuals who intend to heal the world and persuade others to follow them. They want to rebuild the world based on their ideals and want others to implement their beliefs.

This is one of the common types of paranoia that is observed in people with delusional disorder. The sufferer falsely believes 12 that they have a medical condition, health problem or physical defect and tend to be excessively worried about their health. They may constantly consult doctors even after being repeatedly convinced that they are healthy. “Hypochondriacal paranoia is an important subset of paranoid conditions, which should not be overlooked in patients with persistent hypochondriacal complaints,” explains a 2018 study 13 .

In this form of delusion, the person is highly suspicious and doubtful or their spouse or sexual partner. They firmly believe that their romantic partner is unfaithful 14 even though there is no evidence to prove such paranoid thoughts. This is also one of the most common types of paranoia. Research reveals that this form of paranoia can make someone highly aggressive and prone to violence. The researchers add “It is a major contributor to domestic violence and in a recent study, jealousy/possessiveness was a factor in about 30% of spousal homicide by male perpetrators.”

Also known as a paranoid litigious state, it makes the person prone to constant arguments, complaints and claims of imagined persecution. They may threaten others about going to court and tend to file cases against people as they believe their rights have been violated or they have been wronged. Studies 15 show that a low-dose of the medication pimozide can successfully treat this form of paranoia.

This is a type of delusion 16 that revolves around certain phenomena which are impossible to understand for normal individuals. Most of these paranoid thoughts are not related to reality.

Thought broadcasting is a type of delusion that makes a person believe that their thoughts are being projected by a force like the government through the media and are perceived by others. Thought insertion is one of the unique types of paranoia where one believes that their thoughts are not their own. Instead, the thoughts have been inserted or placed into their mind by an external entity or source. A 2015 study 17 explains that thought insertion “involves somehow experiencing one’s own thoughts as someone else’s.”

Individuals with this form of delusion tend to have two or multiple types of paranoia mentioned above. There is no specific theme which is prevalent in such cases.

Other Types Of Paranoia

Apart from the various types of paranoia mentioned above, several studies have identified other types of this thought process and classified them into separate categories. One study 18 claims that the term ‘paranoid’ is mostly used ambiguously and can be categorized as the following three distinct sets of clinical phenomena –

“These three processes are distinct descriptively, dynamically and genetically. Further, this differentiation is most significant pragmatically as the treatment is different for each type,” add the researchers. Another 2005 study 19 has recognized two distinct types of paranoia. It states “Two types of paranoia have been identified, namely persecution (or ‘Poor Me’) paranoia, and punishment (or ‘Bad Me’) paranoia.” The study found that people tend to have different phenomenology, particularly in self-esteem, evaluative beliefs, anger, anxiety and depression.

Recognizing the specific types of paranoia in a patient is perhaps the first and most important step towards recovery. A mental health professional can help to identify the type of delusions a person is experiencing and suggest an appropriate treatment plan for them involving therapy, medication or both. Although there is no specific cure for treating paranoid thoughts, treatment and coping strategies can help the sufferer develop a positive thought process and experience mental, emotional and physical well-being.