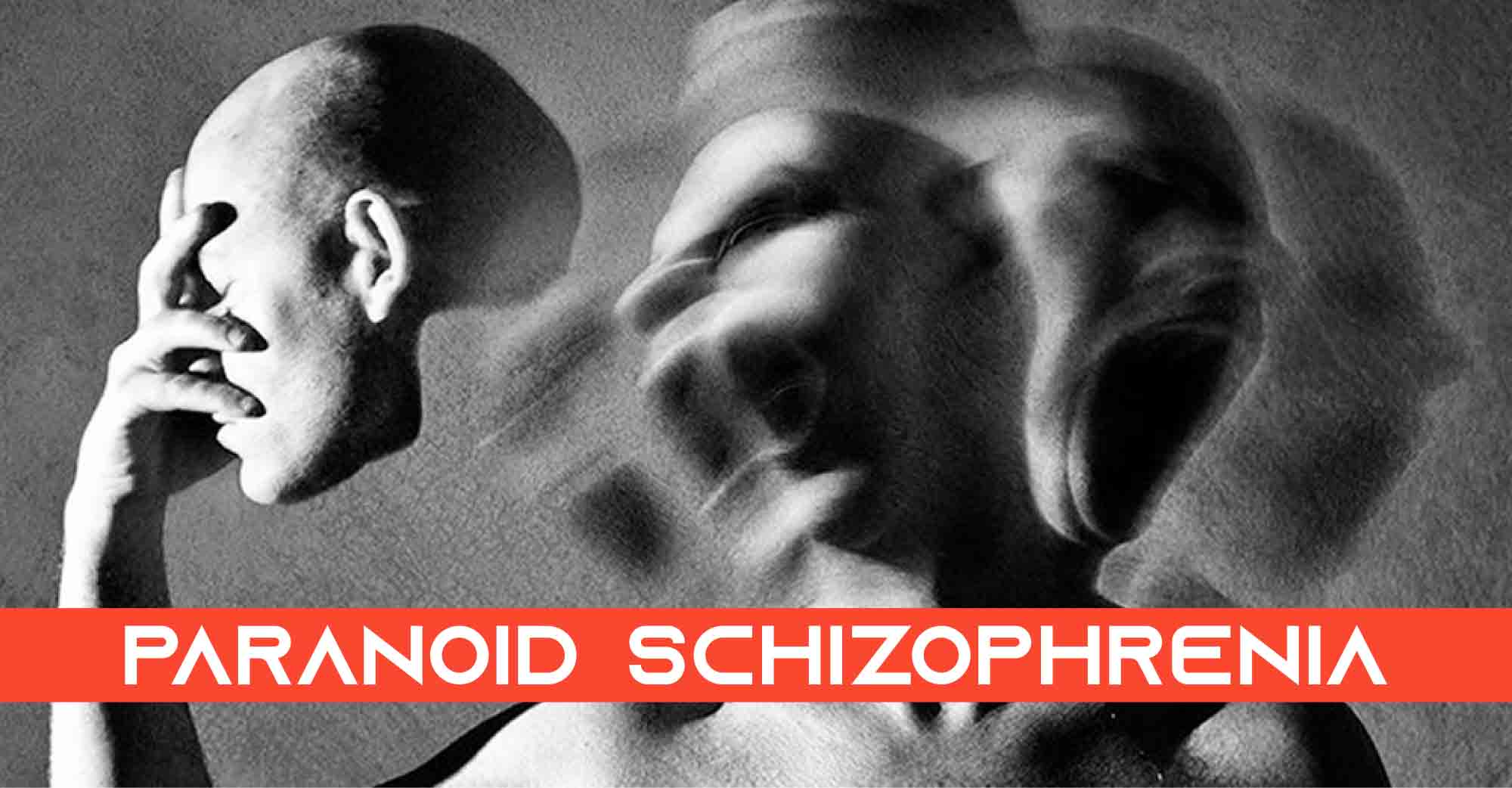 Paranoid schizophrenia is a disabling psychiatric disorder that can affect a person’s daily functioning, health and wellbeing. It is the most common type of schizophrenia which can be managed with effective treatment.

What Is Paranoid Schizophrenia?

Commonly identified as schizophrenia with paranoia, this form of mental disorder is characterized by positive symptoms 1 of schizophrenia, primarily disorganized thinking, delusions and hallucinations. Mind Help defines this condition as “a debilitating disorder characterized by frequent visual or auditory hallucinations and one or more delusions. It is a defunct subtype of schizophrenia that involves extreme paranoia.” Paranoid schizophrenia is particularly characterized mostly by hallucinations of an auditory nature, such as hearing weird sounds or unexplainable voices, and delusions of persecution, jealousy or grandiosity. It may not involve other symptoms, such as a lack of emotion, catatonic behaviour, or disorganized speech. The sufferer may also show inappropriate emotional responses, behave in an abnormal manner and fail to find any pleasure in life.

The disorder can significantly affect their perception of reality and make it difficult for them to distinguish between what is real and what’s imagination. As schizophrenia is a chronic mental disorder 2 which can lead to experiencing distorted realities, patients with this subtype of the condition can perceive reality differently from others. In this type of schizophrenia, paranoid symptoms dominate the psychotic symptoms. It can adversely impact the life of the patient and affect their thoughts, emotions, behaviours, actions, relationships. A 2015 study 3 found that “Patients with paranoid schizophrenia expressed a partial loss of intellectual efficiency with verbal IQ and executive functions preserved.” They also showed cognitive disorders to a moderate degree.

According to studies 4, the estimated prevalence of schizophrenia is around 0.25%-0.64% in the U.S. based on household survey samples. Global prevalence is found to be approximately 0.33% to 0.75% among non-institutionalized people. As paranoid schizophrenia is regarded as the most common subtype of schizophrenia, this chronic condition may be more prevalent in people than observed. According to research 5, prevalence is estimated to be 0.17 per 10,000 of the population. However, the incidence may vary depending on the age and gender of the population surveyed.

Although a person may develop schizophrenia at any age, the average age is usually experienced between late teens and early 30s. However, onset usually occurs earlier in males than in females.

Is Paranoid Schizophrenia A Genuine Diagnosis?

Although a patient cannot be medically diagnosed with paranoid schizophrenia anymore, a person may experience certain paranoid symptoms with schizophrenia. Paranoia is one of the primary diagnostic criteria for schizophrenia and is identified as a positive symptom. One 2016 study 6 states “Paranoia is a common symptom of schizophrenia that may be related to how individuals process and respond to social stimuli.” It makes the sufferer distrusting of others, confused and fearful. Moreover, due to hallucinations and persecutory delusions, they may believe they are in danger or someone is planning to harm them. The researchers found that paranoid individuals experienced significant impairments in interpersonal relationships & social acceptability which affected their normal daily functioning.

However, it should be noted that not every person with schizophrenia will experience paranoia, even though it is one of the most primary symptoms. It is only by identifying the symptoms early and accurately, patients can seek appropriate treatment and improve their quality of life.

Schizophrenia with paranoia has some specific symptoms that may change over time. Moreover, certain symptoms tend to improve with age and treatment. Some of the most common symptoms of paranoid schizophrenia usually include:

Patients with paranoid schizophrenia mostly experience delusions of control, grandeur, persecution or reference. This can make them believe that they are being controlled by a secret government or aliens, or they have extraordinary abilities and value, or that someone/everyone is trying to harm them. Auditory hallucinations or hearing voices that actually don’t exist is the most common form of hallucination for this disorder. Negative symptoms may include loss of interest and motivation, lack of concentration, reduced social drive, lack of social interest, apathy and an inability to experience a pleasure. This can lead to issues in personal and social relationships and create problems with family and friends. Sufferers also tend to isolate or withdraw themselves, speak less, appear emotionless and refrain from expressing themselves. Social isolation can often make these symptoms worse.

Apart from these, this mental health condition can also affect the patient’s –

A person with paranoia may additionally experience these following symptoms:

Self-harm and suicidal ideation and behaviours are also a prominent symptom of paranoid schizophrenia, especially when left untreated. If you or someone you know is experiencing these symptoms or having thoughts of self-harm or suicide, then make sure to seek medical attention immediately.

The exact cause for the development of schizophrenia with paranoia is not yet known. However, it is believed that a number of different influences, such as genetics, brain structure and environmental factors can play a crucial role. Studies 7 reveal that genetics play a crucial role in the onset of this condition. The disorder may run in families but no single gene has identified yet. Brain chemistry 8 can also play a contributing role as chemical abnormalities in the brain can lead to an imbalance in neurotransmitters that can influence our thoughts and behavior. Research 9 has found that dopamine abnormalities in the brain are present in patients with schizophrenia. Moreover, physical and biological factors, like hormonal changes 10 should also be considered when diagnosing the condition.

Environmental factors, such as adverse childhood experiences 11, exposure to viral infections 12 & toxins, birth defects and other psychosocial factors, like trauma or abuse, can also be a significant factor in the onset of paranoid schizophrenia in people with a genetic predisposition. Certain recreational drugs 13 and medications may also trigger this mental illness. Research 14 also indicates that people affected by schizophrenia with paranoia may also experience social cognitive impairments resulting in poor social functioning and social cognitive bias.

For a mental health professional or a doctor to diagnose this disorder, the sufferer must exhibit the symptoms constantly for at least a period of 6 months. A psychologist or a psychiatrist may conduct certain physical examinations and laboratory tests, such as imaging tests and blood tests to make sure the symptoms are not a result of any other medical condition, neurological issues, medications or substance abuse. The doctor may also conduct a psychiatric evaluation and consider the medical history and family history of the patient as well. The diagnostic criteria 15 as established by the DSM-5 requires the patient experiences at least one the following for one month:

The symptoms should also disrupt the patient’s ability to function in daily life and important areas like education, work, relationships, self-care etc. The diagnostic process may be lengthy depending on the patient and the severity of the symptoms.

As this chronic psychiatric disorder is a lifelong condition, there is no specific cure for paranoid schizophrenia. However, the symptoms can be managed effectively through long-term treatment involving a combination of different treatment approaches, like medication and therapy. Here are some treatment options for schizophrenia patients:

Antipsychotics are the most commonly prescribed medications for schizophrenia with paranoia as it can reduce delusions and hallucinations. However, as these medications can have severe side effects, such as drowsiness, nausea, low blood pressure and uncontrollable movements, a doctor may prescribe atypical or second-generation antipsychotics as they have fewer side effects. Clozapine is the only atypical antipsychotic medication that has been approved by the FDA for schizophrenia patients. The U.S. Food and Drug Administration (FDA) states “Clozapine is a medicine that has been used for more than 40 years to treat schizophrenia in patients whose symptoms are not controlled with standard treatment.”

Psychotherapy is also widely recommended for patients as it can help the sufferers to identify warning signs, manage stress, stick to the treatment plan and live independently. Common therapy treatments available for this condition are –

However, the symptoms may reappear or get worse if the sufferer refuses to follow the instructions of their doctor or stops suddenly. Moreover, identifying the best treatment approach may also take some time as it depends on the intensity of the symptoms, frequency of symptoms and the patient’s age. This is why it is important that the patient and their doctor work together to develop the best and most effective treatment plan. In extreme cases, hospitalizations may be required to keep the patient and their loved ones safe.

If you know or care for someone who is affected by paranoid schizophrenia, then here are a few things you can do to help:

Read More About Helping Someone With Paranoid Schizophrenia Here

Treatment can greatly help people suffering from paranoid schizophrenia to improve their condition and relieve symptoms almost completely or to the point where they don’t affect the person’s daily functioning. However, continued and lifelong treatment is necessary to manage comorbid conditions and prevent them from occurring. If left untreated, this disorder can lead to the development of the following associated co-occurring disorders:

When left untreated, schizophrenia may become severely disabling. In extreme cases, patients who refuse to seek treatment tend to become unemployed, homeless, face financial constraints and commit suicide. This is why it is very important to seek help and consult a medical professional immediately.

Long-term treatment can effectively help patients to manage their symptoms and improve the quality of their lives. However, due to high rates of non-adherence to the treatment, the prognosis seems poor. According to a 2017 study 16, approximately 60% of schizophrenic patients tend to discontinue their treatment plan after 2-3 months, while around 80% of patients stop neuroleptic treatment after a period of 2 years. Non-adherence and non-compliance to treatment is primarily caused by certain common factors such as –

The researchers state “The continuous treatment of schizophrenia is necessary to control the symptoms and prevent the relapse. The early discontinuation and irregular treatment result in relapses, drug intolerance, and drug resistance. Finding the ways to increase drug compliance may change the situation and improve the prognosis in schizophrenia.” Certain practices such as motivational interviewing, psychoeducation, therapeutic alliance, accessibility can improve compliance and adherence. Moreover, a patient’s relationship with their therapist can also increase their trust in the treatment process and make recovery successful.

Paranoid Schizophrenia At A Glance