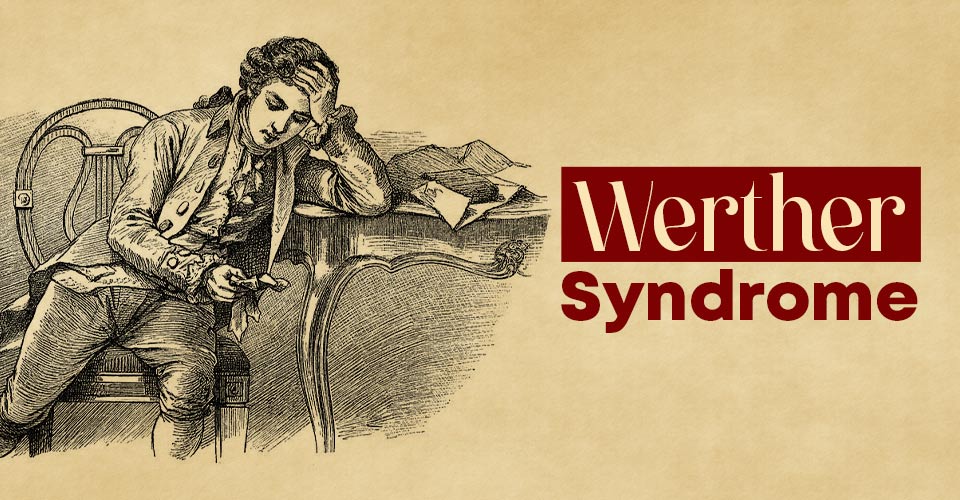 Werther Syndrome or the Werther effect refers to a pattern of emulative or copied suicides which are roused or encouraged by a previous highly-publicized suicide of a famous individual.

What Is The Werther Effect?

Werther Syndrome, also known as Copycat Suicide, is the act of imitating another suicide that the individual, trying to commit the act, is aware of either from the news of the original incident, depictions or accounts in various media or from local knowledge. According to the experts at Mind Help, the Werther effect can be defined as “individual or mass suicides prompted by the suicide of a popular role model which has gained adequate coverage in the media.” Due to the lack of protective factors, a suggestible or susceptible individual may be triggered or motivated to commit suicide after the publicized suicide of a known celebrity or a fictional character from a work of literature. This is also known as suicide contagion 1 .

History Of The Werther Syndrome

The term is originated after the publication of the novel Die Leiden des jungen Werthers (The Sorrows of Young Werther) by Johann Wolfgang von Goethe (1749-1832) in 1774. The book triggered a craze among young men during that time who started to mimic the book’s protagonist (Werther) by dressing in yellow pants and blue jackets. In the book, Werther shoots himself with a pistol after he is rejected by the woman he loves. It was not long after the publication of the book that many young men, who were obsessed with the protagonist, started to kill themselves using the same method in acts of hopelessness. This led to the book being banned 2 in many communities.

The term “Werther Effect” came into being in the technical literature based on this incident. The term was coined by researcher David Phillips after his extensive research on this matter. Phillips and his colleagues found in 1985 and 1989 that suicides, and other auto accidents and private aiplance crashes disguised as suicide, seem to rise after a well-publicized suicide.

In social sciences and medicine, the term ‘Werther Syndrome’ or ‘Werther Effect’ is used as a synonym for media-induced emulation of suicidal behavior. Exposure to suicidal behavior in others has shown to influence the same behavior in the persons that are exposed to it, especially adolescents and young adults. This could spread through schools, communities or even nationally, triggered by suicide in celebrities. It then deveops into a suicide cluster. A cluster may be defined as suicidal behaviors in multiple individuals within an accelerated time frame and sometimes within a particular geographical area.

According to a 2013 study 3 , “Potential risk factors include male gender, being an adolescent or young adult, drug or alcohol abuse, and past history of self-harm.” Moreover, a 2009 national survey 4 revealed that in the U.S. alone, 15% of the respondents in 9-12 grade students had nearly seriously considered suicide and 7% actually had attempted suicide in the previous 12 months.

Fiction And The Werther Effect

The Werther Syndrome can also be influenced by fiction even in the modern age. A 2017 study 5 published by JAMA inernal Medicine found that ‘13 Reasons Why’, a Netflix series based on a teen girl’s suicide, led to an increase in the internet searches related to suicide. As per the research, all suicide queries were 19% higher for 19 days immediately following the release of the series. It reflected 9,00,000 to 1.5 million more searches than expected. Out of those 19 days, the first 12 days showed suicide queries to range between 15% higher on April 15, 2017 to 44% higher on April 18, 2017.

Prevalence Of The Werther Syndrome

Following the discovery of the Werther Syndrome, studies were done to keep a track of suicide rates in general public induced by suicide committed by celebrities. It was found 6 that suicide clusters were formed due to the publication of information of suicide of celebrities like Ruan Lingyu, the Japanese musicians Yukiko Okada and Hide and Marylin Monroe, whose suicide led to an increase of 200 more suicides than average for one month during that time. In another research 7 , it was found that the suicide of South Korean actress Choi Jin-Sil caused an increase of 162.3% in suicide rates and the suicide of the South Korean president Roh caused the increase to be 104.8%. The female suicide rate more than doubled during the first three weeks after her death. Suicide by hanging, which was the method used by Ms. Choi, increased by 60.71% immediately following her death.

Another famous case is of the Tunisian street vendor Mohamed Bouazizi who is known for inciting the Arab Spring through self-immolation. He set himself on fire on December 17, 2010 in protest of the humiliation that was inflicted on him by the government officials. The Tunisians’ anger aggravated after this and the revolution that started forced President Zine El Abidine Ben Ali to step down on January 14, 2011. This triggered protests in several North African and Arab countries. Bouazizi was celebrated as a hero and his suicide was covered extensively by the media, which led to several men commiting suicide the same way he did.

According to a 2012 research 8 , people who are susceptible to the Werther effect belong to the young or old age group. Middle aged people in comparison seem to be less affected. Even though the studies 9 were focused on short-term effect (1-2 days to 3-4 weeks) of media reporting, which the researchers claim to be a “highly relevant period for provoking fatal and non-fatal suicidal acts”, it was also found that suicidal ideation in the community influenced by a publicized celebrity suicide lasted longer, for a preiod of approximately one year.

According to research 10 , at least 5 percent of youth suicides might be influenced by contagion and occur in clusters. And due the effects of Differential Association as theorized by Edwin Sutherland, individuals who attempt to copy a suicidal act tend to be of the same age and gender group as of the one triggering suicide.

Role Of Media In The Werther effect

One 2007 research 11 found that “many studies support the hypothesis, that some aspects of quality of reporting could trigger short-term increases of suicides in certain population subgroups.” Hence, different journalism codes are followed in various countries for reporting news related to suicide or attempted suicide to curb the Werther effect. While many countries don’t have such codes, media outlets in such cases have in-house guidelines along similar lines. A few countries that follow certain codes & guidelines relating to suicide news, as mentioned in a research, are:

As per a study 13 in Vienna, the rate in imitative suicidal behavior dropped significantly by adhering to the codes for reporting news related to suicide or attempted suicide. According to a 2010 study 14 , media reporting can significantly influence suicidal behavior. However, “The impact of suicide reporting may not be restricted to harmful effects; rather, coverage of positive coping in adverse circumstances, as covered in media items about suicidal ideation, may have protective effects,” adds the study.

The effect of mass media on people by presenting non-suicide alternatives to crises, also known as the Papageno effect, seems to work against the Werther effect. A 2015 study 15 explains “There is ample evidence for additional copycat effects after media coverage of suicides referred to as the Werther effect but on the other hand, suicide rates decrease after appropriate media depictions of suicides referred to as the Papageno effect.” It is named after Papageno, a lovelorn character from the 18th century opera The Magic Flute. In the story, he was contemplating suicide until other characters enlightened him of another way to resolve his issues. This was validated by a research published in 2010 that concluded that, “The impact of suicide reporting may not be restricted to harmful effects; rather, coverage of positive coping in adverse circumstances, as covered in media items about suicidal ideation, may have protective effects.”

Another study by Northwestern University in 2018 based on interviews conducted with 5,000 adolescents and parents in the United States, United Kingdom, New Zealand, Australia and Brazil to explore how they related to the Netflix series 13 Reasons Why showed that watching the series prompted conversations between the teens and their parents about bullying, suicide and mental heatlth in general and they were interested in finding more information about suicide prevention. Moreover, it led to the kids showing more empathy towards their peers. One 2018 study also found that reducing or being aware about “the content of social media messages” and managing the volume of social media consumption can also help to prevent Werther syndrome.

As we are yet to identify the exact reasons or mechanism for the Werther effect and how celebrity suicides lead to increased suicidal risk in people in general, it is crucial that we talk openly with trusted loved ones, friends and family members whenever we feel suicidal or think about harming ourselves. By talking to someone we trust, like a parent, sibling, relative, close friend, teacher or a coach, we can gain a different perspective and change our distorted perceptions and thought processes. It is also important to seek professional help as therapy and counseling can enable us to think in a more positive and healthier way and encourage us to embrace life.

Werther Syndrome At A Glance