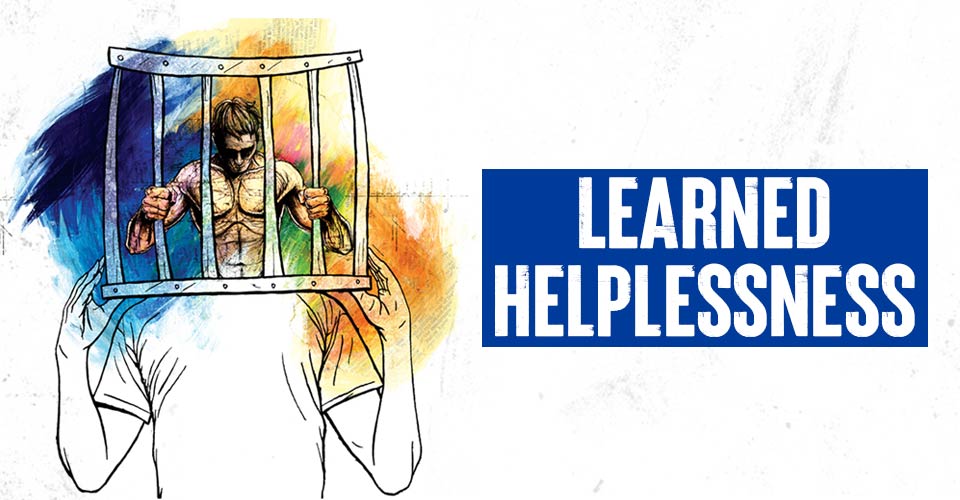 Learned helplessness (LH) is a state of mind that occurs in a person upon experiencing a stressful situation repeatedly. Such individuals come to believe that they are incapable of controlling or changing the situation, so they do not try, even when opportunities for change are available.

What Is Learned Helplessness?

The Mind Help explains,” learned helplessness is a situation that occurs when a living being is repeatedly suppressed by an unpleasant stimulus that it cannot escape or dodge”. As a result, the living being (humans or animals) eventually stops trying to avoid the stimulus but learns to accept the situation as if it is an unchangeable situation. Additionally, even if the living being has opportunities to escape the situation, the psychological state will prevent the organism from taking any action. Even though the concept is strongly tied to animal psychology and behavior, it is also applicable to multiple situations involving human beings. When individuals feel that they have no control over a given circumstance, they may exhibit helplessness. This lack of action can result in people overlooking opportunities for support or change.

A 2012 study 1 explains “Exposure to inescapable, but not equivalent escapable, shock produces a constellation of behavioral changes that have been called learned helplessness or behavioral depression.” Psychologists Seligman and Maier first described learned helplessness in 1967 after a series of experiments in animals, and they suggested that their findings could apply to humans. LH mainly occurs when someone has repeatedly faced uncontrollable, stressful situations, without exercising control when it becomes available. This mainly happens because past experiences have made a person believe he/she doesn’t have the ability to avoid such painful situations. In other words, the victims have trained their brains to believe they have no control over the situation, and so they don’t even need to try.

According to a 2017 study, learned helplessness is the unsuccessful attempt to ”escape shock induced by uncontrollable aversive events”, a concept which was discovered half a century ago. Seligman and Maier (1967) 2 had hypothesized that animals had found out that outcomes were independent of their responses and that nothing they did mattered. ”Passivity in response to shock is not learned. It is the default, unlearned response to prolonged aversive events”, says the study. Furthermore, the passivity, however, can be defeated by learning control techniques via activities catered to the medial prefrontal cortex, which promotes the detection of control leading to the automatic restraint of the dorsal raphe nucleus.

When humans fill their minds with limiting beliefs that are not able to achieve something, it becomes dangerous. It establishes a cycle of self-defeating thinking patterns and when one gets stuck in the middle of this cycle, his/her motivation and overall productivity will inevitably start to suffer. LH leads to increased feelings of stress and depression along with poor decision-making ability. Prof. Martin Seligman, one of the psychologists defining learned helplessness, has outlined three key features:

Helplessness is a state in which a person does nothing to overcome the situation that causes intense pain to the person. In other words, it is quitting or giving up backed by following the conviction that whatever a person does, goes in vain. Such people accept the fact that bad things happen and humans can do very little to control such situations. According to a study 3 , those who are exposed to multiple or complicated problems for an extensive period learn that responses and events are unconnected. The cause can be stable or unstable, global or specific, internal or external. The study states that the condition can be regarded as a consequence of early socialization experiences. To be specific, the rigidity and negativism emphasized in our family systems are likely to affect a child’s development of competence. A number of sociocultural features may also contribute to this condition.

The study also states that children who have a history of abuse and neglect during their childhood and adolescence may also develop a state of learned helplessness. The consequences of emotional abuse may be repeated abnormal or disrupted attachment development and the sufferer blames him/herself for the abuse, leading to learned helplessness, emotional distress, and excessively inactive behavior. Psychological abuse is often combined with other forms of abuse. Children who have experienced chronic neglect are also likely to conceptualize themselves as powerless and of low value. Neglected children are less likely to know that they are being neglected or to know that something can be done about it.

Additionally, LH is also observed in the elderly, due to ”repeated exposure to events perceived beyond their control” that ultimately display cognitive, motivational, and affective deficits of helplessness. The loss of self-esteem may also take place if the individual believes that he/she is personally accountable for the particular situation. Other effects of elder abuse may include feelings of separation, shame, guilt, fear, anxiety, and rejection.

According to a study 4 , the Learned Helplessness Theory states that individuals move from situational perception to learning behaviors. The results are independent of one another as surrounding situations are unable to be influenced by personal actions. The study also states that the effects of LH can be divided into three categories- motivational effects, cognitive effects, and emotional effects.

The motivation or the urge to change any situation is built from the expectation that reacting to a circumstance will change the anticipated outcome of a particular situation at hand. However, when individuals learn that behaviors and outcomes are independent of one another, the expectation to change a particular situation diminishes. Thus, the motivation to willingly respond to a situation also decreases. The weakening motivation to respond to an unfavorable situation occurs in a person due to a lack of urge to initiate spontaneous responses towards the same.

Short-term and long-term exposure to unruly events may have cognitive effects as well. As an individual experiences the response-outcome independence, the individual learns that responses and outcomes are independent of each other. This, in turn, gives rise to the cognitive deficit that is not specific to the current situation, however, may be applied while learning prospective situations. As a result of this cognitive deficit, if the individual’s action is successful in producing the desired outcome, they are typically unaware of this success. This cognitive failure to understand success and the existence of a negative cognitive set caused by independence between the response and outcome outlines an important issue in the cognitive effects of Learned Helplessness Theory.

When an individual experiences a situation which he or she cannot control or change, an elevated state of negative emotion is experienced. Negative emotions, such as depressive symptoms and anxiety, are defined by fear, frustration, or a number of other psychological states. This state of negative emotionality continues under two conditions. First, the response-outcome separation is determined followed by the person returning to a state of being able to control his or her surroundings. Second, when the individual learns about response-outcome independence and the emotional state gives way to depressive symptoms. As observed in earlier animal and human studies, when individuals get exposed to such uncontrollable situations, frustration, fear, and anxiety develop. Once uncontrollability is permitted to continue, the person tends to cease avoidance behavior and rather accept this new state of being. It is at this state of permission whereby the person’s emotional state changes and situational helplessness develop.

To understand the connection between learned helplessness and depression, it is necessary to understand the two types of LH, as outlined by Seligman and colleagues. These are as follows.

This is a much more localized sense of helplessness. In this case, while the person believes that others can find a solution or avoid the pain or discomfort, he/she considers himself/herself incapable of the same.

Both types of learned helplessness can result in a state of depression, however, the quality may differ. In the case of universal helplessness, the person will try to find external reasons for his/her problems and the inability to solve them. However, those who feel personally helpless will tend to find internal reasons. Additionally, people experiencing personal helplessness are at greater risk to suffer from low self-esteem as they believe others could probably solve the problems that they feel incapable of solving. Although the cognitive and motivational deficits are the same for people suffering from both personal and universal helplessness, people experiencing personal helplessness tend to have a greater and more impactful emotional deficit. Furthermore, depression will differ based on the type of helplessness. The range of depressive symptoms will depend on the universality and stability of the helplessness, and any impact on self-esteem is dependent on how the individual explains or associates their experience.

According to a study, since most of the research on uncontrollable trauma has used infra-humans, experts can only theorize the relationship of learned helplessness in animals to maladaptive behaviors in man. ”The phenomenon of human depression, particularly reactive depression, has a number of parallels to the phenomenon of learned helplessness”. The study explains that just like LH, depression is defined by ”reduced response initiation” as well as a “negative cognitive set”, i.e., trouble in understanding that one’s own responses will succeed even when they do. Additionally, some of the recent theorists have proposed that learning and accepting that one is helpless and hopeless is the primary psychological cause of depression and this connects with the etiology of learned helplessness. Finally, successful psychotherapy in depression, like therapy for LH, may help the patient to come to believe that he can be efficient in controlling the events that are significant to him/her, and recent evidence lends support to this view.

It is hard to overcome the feeling of learned helplessness, however, there exist promising treatments to address it in humans. These are as follows –

The most common treatment is therapy, especially cognitive-behavioral therapy (CBT). CBT helps people overcome these types of challenges by changing how they think and act. In therapy, people can:

Some research 5 suggests that exercise can prevent LH in animals. However, there are no studies to prove the effectiveness of exercise in humans. Additionally, eating a balanced diet, meditating, and practicing mindfulness are other lifestyle changes that can boost a person’s mental health and outlook.

In Dweck’s 1975 study, participants who were experiencing extreme reactions to failure were split into two groups. One group had received intensive training in which they failed tasks and were directed to take responsibility for their failure. They were asked to connect it to their lack of effort. The other group received intensive training in which they only experienced success. The results showed that those in the success-only treatment group showed no improvement in their extreme reactions to failure, while the group that failed showed a marked improvement. This experiment was one of several studies throughout the 1970s, 1980s, and 1990s that laid the foundation for a new approach to human behavior related to failure learned helplessness and resilience.

Living with the feeling of learned helplessness is not an easy task. It can have an intense impact on mental health and well-being. Individuals may also experience the symptoms of depression, elevated stress levels, and less motivation to take care of their physical health. Not everyone responds to experiences the same way. Thus, if a person is suffering from LH, he/she must consult an expert and practice steps that can change his/her thinking pattern. Additionally, therapy may help in replacing the feelings of learned helplessness with a sense of learned optimism instead.

Learned Helplessness At A Glance