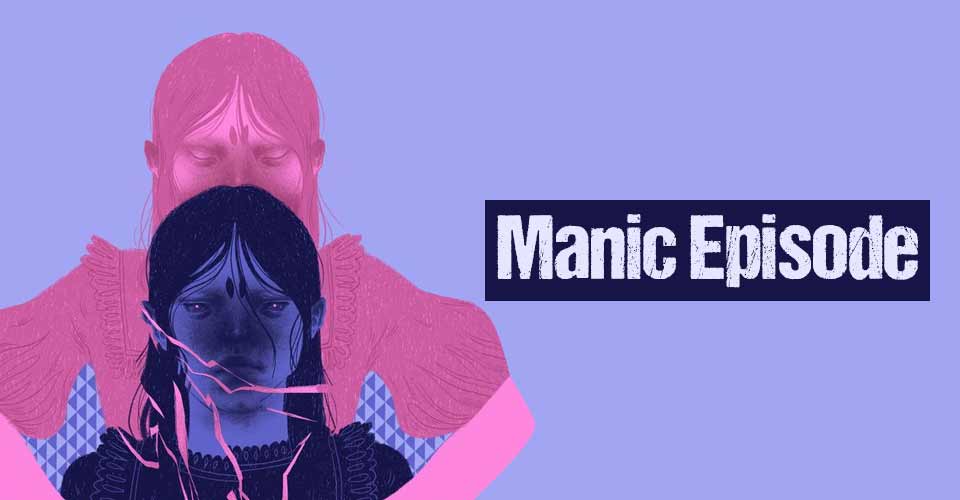 Manic episode is typically an elevated or irritable mood, which can range from intense energy, pacing thoughts to other intense or exaggerated behaviors.

What Is A Manic Episode?

Manic episode or mania in general terms is a psychological state of mind that involves euphoria and high energy levels, which can last for a period of one week or more in which a person experiences a change in their normal behaviors that drastically affects their day to day functioning.

Mania can be typically characterized by that person’s talkativeness, rapid speech, insomnia, disturbing thoughts, distraction towards their work, increased goal driven anxiety and psychomotor commotions. According to a recent 2021 research paper 1 , some significant characteristics of a manic episode include elevated talkativeness, erratic mood change, impulsiveness, irritability,and pretentiousness. Mania is different from heightened tension and altered functioning that arises from substance abuse, different medical conditions or any other causes.

Mania is a psychological state of mind which is a characteristic of bipolar I disorder 2. A single manic phase is enough to conclude that it is a bipolar I disorder. Although many cases of bipolar I disorder are also associated with hypomania and depressed episodes.
Mania is commonly associated with psychotic features which includes delusions or hallucinations. The sufferer might also experience auditory or visual hallucinations, which only comes out when they are present in the manic state. When the sufferer is in a state of paranoia a common hallucination is that the sufferer starts to believe that people are surveilling them, they might believe that this is done by government officials or agencies, criminal gangs or other persons with whom the sufferer might have a rift.

Manic Episodes At A Glance

Some of the common types of manic episodes, which are generally found in a maximum number of cases are – Hypomania, Mixed state, Bipolar mania.

Hypomania 3 literally means “ less than mania”, which is a mild state of mania that has little to no effect to impair body functioning or decrease the quality of life, on the contrary it might increase productivity or creativity. The sufferer might develop a habit of late night sleeping or sleep deprivation 4. The sufferer might develop a goal driven behavior or metabolism.

Though the sufferer might develop an elevated mood or have high energy levels, it could result in the benefit of the sufferer, but in hypomania if the eminent mood is irritability to little things in their day to day life as opposed to euphoric, it would be a rather unpleasant experience.

In case of exaggerated hypomania, the sufferer can display excessive faith in something, pretentiousness and bad decision making with often no regard to the consequences.

Depression 5 though is a huge risk factor for the sufferer but if it is coupled with increase in energy levels or hyper-tension, the sufferer is more likely to act in a violent manner on suicidal thrust. Some prominent features of a sufferer being in a mixed state 6 are episodes of despair, doubt, anguish, rage, homicidal ideation, splitting, racial thoughts, sensory overload or splitting.

If a sufferer has one manic episode without any substance abuse or any medical condition, the condition is often diagnosed as bipolar I disorder. Bipolar I disorder is often termed as manic depressive disorder or bipolar mania 7. A manic episode is often associated with abnormally elevated or irritable mood, accompanied by high energy levels and abnormal behavior that disrupts the daily functions in a sufferer’s life.

Some common symptoms of associated disorders which a sufferer exhibits can be jumping from one idea to the next, rapid uninterruptible loud speech, increased energy along with hyperactivity, decreased need for speech, expanded self image, hypersexuality9, hypertension 10 etc.

Causes Of A Manic Episode

Some causes of manic episodes can be stated as:-

Numerous Scientific studies have found that several genes belonging to several biological pathways such as hypothalamic-pitutary-adrenal (HPA) axis, serotonergic transmission, neuroplasticity, immunity, calcium signaling and circadian rhythms to interact with childhood trauma to decrease the age of the onset of the bipolar I disorder or else their is a higher percentage of chances that the sufferer might commit suicide.

Medication as directed by the psychiatrist can be a variety of mood stabilizer drugs.

Antipsychotic drugs suggested if depression or mania persists even after taking other medicine.

Antidepressant drugs are given to manage depression, antianxiety drugs to help with anxiety and improve sleep but are usually recommended for a shorter period.

As above stated bipolar I disorder is a chronic illness so there needs continued treatment even on a day when the sufferer feels better.

Skipping the treatment might result in relapsing, a minor mood change can lead to a full-blown manic episode or depression.

Day treatment programs are needed as it provides the necessary counseling and support which is needed to get the disease under control.

Psychoeducation 20 can help the suffer and their loved ones to understand bipolar disorder better, which will help to identify issues better and follow the treatment plan.

A recent scientific study 21 suggests that Cognitive behavioral therapy can help in focusing on identifying unhealthy, negative beliefs and focus on positive and healthy beliefs, this will help to cope with negative thoughts and manage stress in the sufferer’s life .

1. Manic episodes can be managed if the sufferer realizes it and maintains a stable sleeping pattern.

2. The sufferer should set realistic, short-term targets which can be achieved on that particular day or week.

3. Abandoning the habit of recreational drugs or alcohol, if consumed, can easily make the sufferer deviate from the targets that he/she has set for him or herself.

4. The sufferer should open up to his/her family and friends and discuss it with them, to help the sufferer to have a support network, so that the sufferer can make good decisions.

5. Reducing stress at work or home will help the sufferer to manage manic episodes.

6. The sufferer should keep track of the mood changes every single day so that he/she can write a journal and write down the symptoms.

7. The sufferer should seek professional help if he/she finds the symptoms uncontrollable.

In a Bipolar – I – Disorder affected person with an episode of mania, any differential treatment towards them can make irreversible changes to their condition.

Manic episodes are a hallmark of Bipolar – I – Disorder, a person is in such a psychological state having high mood and energy, pacing thoughts and erratic behavior.

People who have experienced manic episodes also experience illogical thinking marred with false beliefs or hallucinations, which places them as well as their loved ones lives in danger.

The caregiver must be patient with the sufferer, as love, care and support can help the person recover and contain those symptoms.

Self Help Strategies For Eating Disorders