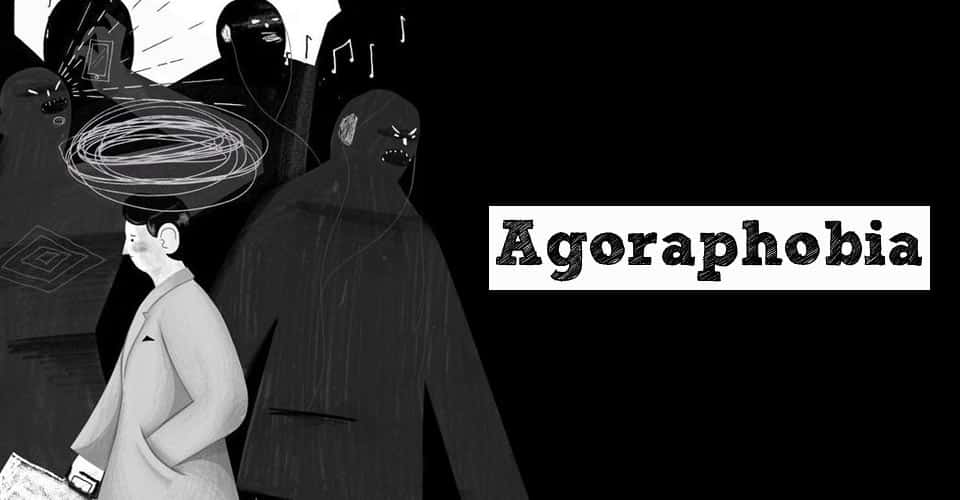 Agoraphobia is an anxiety disorder in which an individual is afraid to go to crowded places or situations that may cause a panic attack. The individual has a fear of an actual or anticipated situation, like standing in line or being in enclosed spaces.

It is a rare form of anxiety disorder that leads to extreme fear and panic. People with this condition are afraid of stepping out of their homes and going out into the world. Hence, they avoid specific situations and places where they feel trapped and unable to escape. “Agoraphobia is the fear of being in situations where escaping may be difficult or embarrassing, or when aid may not be available in the event of panic symptoms,” according to the American Psychiatric Association. The fear experienced by the sufferer is usually out of proportion in regards to the real situation. The symptoms of this disorder may last for over 6 months and may affect their ability to function in daily life.

An agoraphobic person may be afraid of certain situations, like –

Agoraphobia is a Greek term, derived from “agora” meaning place of assembly and “phobia” meaning fear. The disorder is characterized by symptoms of anxiety and panic that makes the sufferer feel helpless, trapped and embarrassed. The condition was not considered a distinct disorder until 2013, when the Diagnostic and Statistical Manual of Mental Disorders (DSM-5) categorized it under phobias. Agoraphobia affects almost 1.7% of adults, with 1% of men and 2% of women having the condition during a period of 12 months.
Moreover, around 30-50% of individuals with this disorder also suffer from panic disorder. Onset of this rare phobia is usually by the age of 35. The condition begins in early adulthood and becomes less common with age. However, it is rarely found in children.

Agoraphobia is an irrational and intense fear of public places or open spaces. It is a negative behavioral outcome of persistent panic attacks and ensuing anxiety. “Agoraphobia is characterized by worry about being separated from a place or person associated with safety,” according to a 2012 study. After one or more panic attacks, the majority of agoraphobics develop agoraphobia. As the sufferer becomes preoccupied with these adverse emotions and attacks, they start to avoid situations that may trigger a panic attack. Agoraphobics may be afraid of situations that may not pose any real threat or may even feel anxious simply by anticipating a situation without any means of escape or access to help.

It is often considered as a progressive phobia that is primarily a fear of panic attacks. According to the American Psychiatric Association, “the individual actively avoids the situation, requires a companion, or suffers from intense fear or anxiety.” If left untreated, the condition can deteriorate to the point where the person refuses to leave their home. As a result, their quality of life is affected and their scope of living becomes smaller due to constantly being on alert and awaiting the next episode of panic attack. “According to the Anxiety and Depression Association of America, “some people create a set path or territory, and it may become hard for them to venture outside their comfort zones without experiencing significant anxiety” (ADAA).

According to the National Health Service (NHS), UK, “Agoraphobia usually develops as a complication of panic disorder, an anxiety disorder involving panic attacks and moments of intense fear”. The symptoms of Agoraphobia occur every time this situation arises and lasts for more than six months. People affected by it can go to great lengths to avoid situations that make them feel unsafe.

A person suffering from Agoraphobia can experience the following common and specific symptoms:

This disorder is often correlated to panic attacks. A panic attack is a series of symptoms that can occur due to extreme anxiety or other mental health conditions. This can involve a wide range of physical symptoms:

People with this condition can experience panic attacks whenever they feel stressed or are in an uncomfortable situation. However, there are several other conditions that produce the same kind of symptoms, such as:

People who are affected by this disorder are more susceptible to develop depression or substance abuse disorder as well.

Agoraphobia Vs Other Phobias

This disorder is different from the diagnostic criteria for other phobias. For example:

The exact cause of this condition hasn’t been found yet. The condition usually occurs due to a combination of genetic and environmental factors. It often runs in families and is usually triggered in stressful or traumatic situations, such as loss of a loved one or assault. However, there are several other factors that contribute to the risk of developing it. They include:

Research 3 indicates that “parental overprotectiveness, the presence of childhood fears or night terrors, experience of grief or bereavement early in life, unhappy or traumatic childhoods, or genetic predisposition,” may also cause the development of this condition. Moreover, people with highly-neurotic, obsessive-compulsive and dependent personalities may also become agoraphobic. This disorder is commonly found in women than in men. It usually begins in young adulthood. The average age for the onset of this disorder is 20. However, the symptoms can show at any age.

How Agoraphobia Is Diagnosed

In order to diagnose this condition, you may experience extreme fear or anxiety in any two of the following situations as laid down by the DSM-5:

Moreover, you also need to experience anxiety, fear and avoidance for a period of more than 6 months. The fear must revolve around difficulty in escaping the situation or unavailability of help. The doctor may also consider the following while diagnosing Agoraphobia:

The National Institute of Mental Health (NIMH) estimates that 0.8 percent of American adults suffer from this disorder. People suffering from this disorder realize that their fear is irrational but they are unable to do anything about it. If the condition is left untreated, it can pose serious health consequences. Hence, early diagnosis and immediate treatment is crucial for recovery.

There are several treatment methods that can be adopted for agoraphobia, which usually involves a combination of therapy and medication.

The following types of therapy options are available for the treatment of Agoraphobia:

This type of therapy involves interaction with a therapist or any other mental health professional on a regular basis. This allows the patient to talk about their fears and anxieties. The effectiveness of this therapy is seen when it is combined with medication. Psychotherapy is typically a short-term treatment that can be discontinued once the patient has learned to cope with their anxiety or dread.

CBT is the most commonly used treatment method for all anxiety disorders. One 2017 study 4 states “The standard psychological treatment for agoraphobia symptoms is cognitive behavioral therapy (CBT), which is also recommended by the UK National Institute of Health and Care Excellence.” In this therapy, the patient is made aware of their thoughts and patterns and how it affects their behavior. It also teaches you how to handle stressful situations by replacing anxiety-provoking thoughts with positive thoughts. This allows the individual to regain control over their life.

Exposure therapy is the gradual process of exposing the patient to situations or places they fear. This therapy helps to overcome the fears the patient has about being in an unsafe environment.

There are certain medications that can help relieve the symptoms of Agoraphobia or panic attacks. A doctor may prescribe the following medications for this condition:

It is essential to derive a coping mechanism in order to deal with this disorder. Making a few modifications in your lifestyle may not heal agoraphobia but it can help reduce the associated anxiety. Here are a few recommendations that you could try:

It is advisable to not take herbal or dietary supplements. These supplements might interfere with the effectiveness of the prescribed medication.

Can You Heal From Agoraphobia?

It has been found that this disorder heals with age. However, getting the right treatment and medication can help to accelerate the process of healing and can ensure the quality of life for the patient. The patient has a good chance to have better health if the treatment is started early. This mental condition can be exhausting as it prevents the patient from participating in daily activities.

There is no cure for Agoraphobia but treatment can greatly contribute to the well-being of the individual suffering from it. The support from family and friends is of paramount importance when an individual is suffering from this disorder. Eventually, with therapy and medication, the panic attacks and the symptoms start to lessen.

Agoraphobia At A Glance