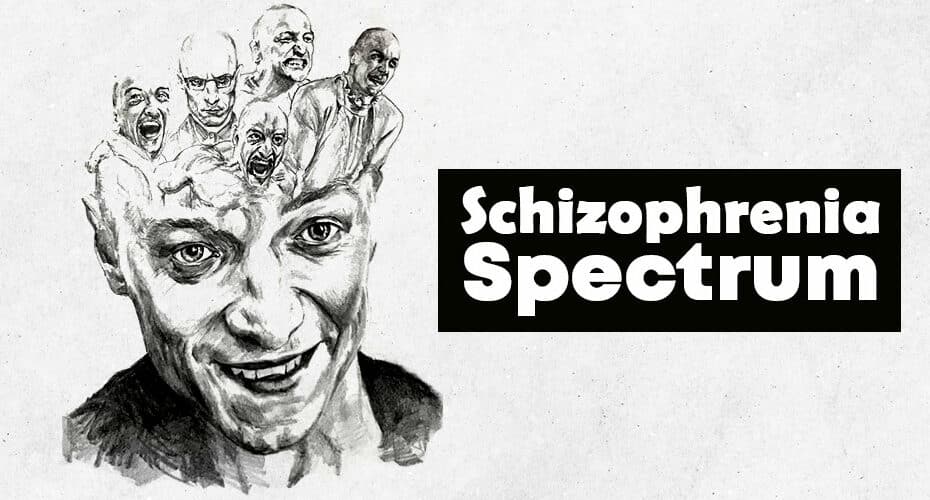 Schizophrenic spectrum is a complicated chronic mental illness, which can make a patient or a sufferer feeble since people with schizophrenia cannot distinguish between reality and hallucinations or delusions.

What Is The Schizophrenia Spectrum?

Schizophrenia is a complex and chronic mental illness that affects a sufferer’s ability to function, think clearly, and manage his/her emotions properly. It is a severe mental disorder which is characterized by a wide range of unusual behavior, hearing voices and distorted or false perceptions, and bizarre beliefs. It can also get difficult for the sufferer to relate to other people.

This mental illness is characterized by coarseness of thought process and perception, this prevents the sufferer from perceiving things like any normal person would perceive. This disorder typically takes root from adolescence into adulthood, progressing from social withdrawal to an active phase of perpetual agitation, recurring delusion and hallucinations. Sufferers experience their first psychotic breakdown in early to mid 20s. This disease can be found in children as well but it’s only possible if the child is overwhelmed by grief.

Paranoia is the most commonly reported delusion found in Schizophrenia patients or sufferers; a sufferer always feels threatened against an imaginary identity which are often associated with false accusations and general mistrust for others. Every Schizophrenia patient does not experience these symptoms.
Recent studies 1 suggest that there is a difference between paranoid and non-paranoid schizophrenic patients evaluating social environment or social information.

A large number of studies suggest a link between paranoia and hostility and blaming acknowledgment of social events. Impairment in the brain has shown increased paranoia ideation.

This type of schizophrenia is characterized by disorganized speech, disorganized behavior, and inappropriate affect. Other features include grimacing, mannerisms, oddities of behavior. Some studies have linked disorganized schizophrenia to neurocognitive deficits and poor functional outcomes rather than reality distortion.

This type of schizophrenia is characterized by stupor, trans seizure with rigid body, waxy flexibility like a sufferer’s limbs stay in the position where the other person has put it, mutism i.e lack of verbal communication or response, stereotypy i.e repetitive movement for no reason. The cause of this type of schizophrenia varies from person to person but suggest 2 lack of dopamine, gamma-aminobutyric acid (GABA) and glutamate neurotransmitter as the primary cause of this disease.

This type of schizophrenia is characterized by feeling void of emotions, lack of motivation or desire, auditory hallucinations, delusions, movement disturbance, disorganized speech etc. A sufferer can have this disease when he/she has used mind altering drugs or marijuana 3 frequently as a teenager.

Medical science as of now has not been able to pinpoint the exact causes of Schizophrenia, a person’s brain under extreme stress can have a huge impact on his life. Schizophrenic disorder can occur in a human being when the person changes his/her lifestyle or is forced to change their lifestyle. Social isolation, staying indoors or not being able to make new friends, etc can also cause this disorder. Genetic factors 4 also play an important role as having a parent or siblings puts the person at an increased risk.

Problems during pregnancy 5 might develop schizophrenia in a child, if the mother doesn’t receive proper nutrition or the mother is exposed to viral infection.

There is no single test to evaluate schizophrenia, due to the large number of symptoms which a person might develop. A mental health professional will make a medical diagnosis after a thorough clinical examination. During the medical examination a doctor will try to study the behavioral changes of the patient and his/her biological functions such as sleeping, lack of interest in socializing, or lack of interest in eating.

A person is diagnosed with schizophrenia only if he/she has developed multiple symptoms which have been detailed above for over a period of one month.

As per the advancement of medical science as of now there is no known cure for the disease of schizophrenia. Schizophrenia is a chronic disorder which needs management just like diabetes or blood pressure.

The ultimate goal of the treatment is to make the patient independent so that he/she can have a functional life . Depending on the variety of symptoms a doctor may prescribe the patient different drugs, therapy and rehabilitation which are crucial for the overall cure of this chronic disease. The antipsychotic drugs that help a patient to reduce hallucination, delusion, and paranoia. In some cases, a psychiatrist may prescribe electro convulsive therapy (ECT).

ECT is one of the safest procedures performed by a psychiatrist. ECT is given only when a patient is not responding to any medication or is acutely disturbed. This therapy is performed with mild anesthesia, as it does not cause any distress to any patient. A holistic approach is needed for better treatment of the patient suffering from schizophrenia as medicine is just one aspect of the treatment. The person who is taking care of a schizophrenic patient, his support or structured rehabilitation is also crucial and also plays a vital role in the patient’s recovery.

Helping Someone With Schizophrenia Spectrum Disorder

As per studies 6 it can be concluded that to help someone suffering from schizophrenia there are some ways to deal with it, such as:

Schizophrenia is a serious disorder affecting millions of lives across the globe. Without proper treatment this could cause many relationships to crumble. This is something that shouldn’t be taken lightly and if it gets worse the affected person should seek immediate medical help to get through this. Although misunderstood by a lot of people as more of a personality disorder, it’s actually a mental disorder that tends to disrupt the normal functioning of the individual, without the knowledge of the sufferer that they indeed suffer from it.

Schizophrenia At A Glance