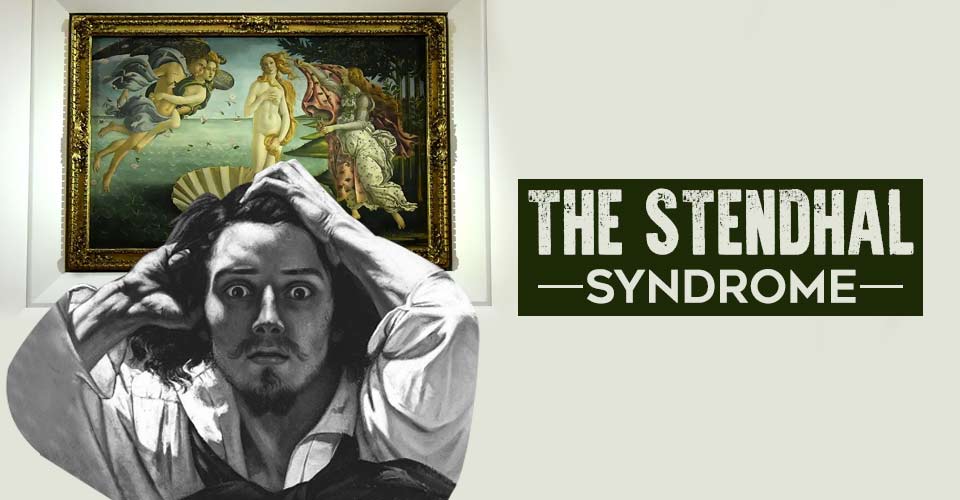 Stendhal syndrome (SS) is a rare psychiatric condition caused by exposure to artistic or historical artifacts or after witnessing too many artworks at the same time. It is marked by a state of dizziness, anxiety, or panic.

While syndromes and disorders are both a collection of signs and symptoms occurring over a period of time, a syndrome can be distinguished from a disorder by the fact that symptoms of a disorder are also supposed to be related to each other, while that is not the case with a syndrome. 1

What Is Stendhal Syndrome?

Also known as Florence syndrome or Florentine syndrome,  Stendhal syndrome is a psychosomatic syndrome that involves both psychological and physical symptoms, such as hallucinations, doubt, uncertainty, rapid heartbeat, etc. Such symptoms tend to occur in a sufferer when they are exposed to events, experiences, artworks or items of significant aesthetic value,  beauty or historical value.

Researchers 2 believe that traveling can often lead to mental discomfort and distress, especially when one is looking for knowledge, self-awareness, and emotions. As a result, several travelers experience psychic discomfort and often seek medical attention.

Alternatively identified as an aesthetic syndrome, it is a clinical phenomenon where “the presence of a beautiful piece of work or architecture causes dysautonomic symptoms such as tachycardia, diaphoresis, chest pains and loss of consciousness,” explains a 2018 study 3.

However, the Diagnostic and Statistical Manual of Mental Disorders (DSM) does not recognize 4 Stendhal syndrome as a psychological condition or disorder.

The condition was named by psychiatrist Graziella Magherini in 1989. She observed that people visiting Florence as tourists tend to experience “acute transient psychiatric symptoms,” 5 such as anxiety attacks, intrusive thoughts, and uncontrollable emotions. This experience was first reported by French author Marie Henri Beyle, whose pen name was Stendhal, when they were visiting the Basilica of Santa Croce in Florence in 1817. 6

Research 7 shows that Stendhal syndrome is more commonly experienced by Europeans rather than Asians, North Americans, or Latin Americans. Many famous personalities have also experienced symptoms associated with Florence syndrome.

Stendhal’s syndrome is characterized by the concoction of different symptoms when in front of a beautiful piece of art. In simpler words, the condition is triggered in an individual in the presence of exquisite art all placed under a roof, for example, in an art gallery. This mental health condition is considered an unusual psychosomatic illness, also known as Florence Syndrome and hyperkulturemia.

Traveling is believed to be a possible cause of the emotional processes as reported in the clinical cases of Stendhal Syndrome. A person with this condition, when exposed to combined works of art, experiences a wide range of symptoms (physical, mental, and emotional). Such symptoms may include –

The syndrome is also associated with other circumstances where individuals feel extremely surprised when they are in the presence of what they regard to be of immense beauty. However, these effects stay for a short span of time, and in most cases, do not require medical intervention.

As per a recent study 3, some of the most common Stendhal syndrome symptoms include:

Some sufferers may also become destructive in order to reduce their discomfort and distress, such as destroying a piece of art. The onset of symptoms of Stendhal syndrome is typically sudden and these last for a brief period of two to eight days.

The study mentioned above also revealed the following findings:

Other symptoms of hyperkulturemia or the Florentine syndrome may include:

However, the condition also causes certain symptoms that may feel pleasing to the sufferer, according to a study 3, such as:

These symptoms can be experienced along with anxiety, perceptual disorders, discomforting somatic symptoms, and a deep sense of guilt, leaving the sufferer confused with mixed emotions.

Research 5 associates the Stendhal syndrome to a few primary factors:

Traveling is believed to be the foremost cause of the emotional disruption reported in clinical Stendhal syndrome cases. For instance, it has been observed that sufferers are typically single, between the ages of 26 and 40 years, and maybe coping with travel exertion 4, mobility stress, or jet lag.

Researchers 8 further claim that traveling can often lead to mental discomfort and distress, especially when one is relating travel with:

A 2015 study 9 stated that “any trip is a source of stress that may trigger or worsen mental disorders ranging from culture shock to a pathogenic trip via the classic pathological trip.” Therefore, any travel-related illness may be caused due to the major impact traveler experiences with the change coming from a different culture and way of life than their own.

Consequently, these travel-related illnesses are observed in almost every culture and destination where the traveler may falter and experience discomfort and emotional changes at some stage of the journey.

3. The link between art and emotion

From the clinical point of view, Stendhal syndrome is a polymorphic condition and, therefore, it must be addressed in an individual manner. This syndrome generally develops in tourists who are fond of art and admire its beauty.

The condition generally arises when they are present in places that take their breath away or for some reason have a very strong emotional meaning to them. It is the development of a connection between emotion and knowledge in the deepest spaces of the mind.

When a traveler observes some exquisite works of art, a displacement and detachment from their usual environment arise which defines the onset of symptoms followed by the eventual treatment.

The syndrome is also associated with other circumstances where individuals feel extremely surprised when they are in the presence of what they regard to be of immense beauty.

However, these effects stay for a short span of time and, in most cases, do not require medical intervention.

Some researchers say that the syndrome is triggered when people observe works of great beauty in a short period of time. In such a narrow timeframe, the afflicted persons are astonished by the beauty and they find it difficult to cognitively process the meaningfulness and depth of such art.

In other cases, a critical physiological response 10 is produced, closely resembling syncope or sexual climax. Resultantly, they are forced to remove themselves from the experience since they lack the ability to tolerate such an intense connection with art.

Thus, Stendhal syndrome is kind of an artistic shock. It is noteworthy that aesthetic syndromes are caused not only by manmade works of art but also by nature.

Studies 11 also contend that the presence of mental health disorders and other comorbid health conditions can also make people vulnerable to the Stendhal syndrome effects. Research 8 shows that people who develop the syndrome are negatively triggered by the landmark stages in their journey.

For instance, it was seen that the end of a journey can develop an intense sense of sadness and depression in a traveler.

This generally occurs when the traveler’s hometown contains less gorgeous works of art when compared to the city that he/she has visited. It produces the onset of very distressing symptoms.

Stendhal syndrome depends on certain risk factors, such as:

Thus, it is suggested that travelers must take enough rest to calm their minds before heading out for another trip, must be well-fed, hydrated, and should use some sort of sun protection.

How To Treat Stendhal Syndrome?

There is no specific cure for aesthetic syndromes as they are a psychosomatic response to culture. Moreover, Stendhal syndrome is not officially regarded as a clinical diagnosis.

However, certain treatment approaches can help to address and relieve the symptoms and associated conditions in fleeting disorders like Stendhal syndrome. Medication, along with relaxation techniques (like deep breathing) can help to manage physiological and psychological symptoms in the sufferer.

The treatment for Stendhal syndrome is mainly focused on its associated effects, such as preventing major injuries followed by a syncopal activity or eliminating major associated complications along with important differential diagnoses.

As per research 12, the processes in Stendhal syndrome treatment aim to assess the health of the brain during recovery.

This includes examining the brain regions associated with consciousness, social interaction, processing of emotion, and memory and checking for pathological and comorbid conditions.

Stendhal syndrome is a controversial and unusual disorder with a non-uniform pattern. The symptoms of this condition can affect anybody. It is normal for individuals to feel dizzy, exhausted, or even experience an increased heartbeat at any moment. Furthermore, the symptoms do not always show up when one encounters a great work of art.

Research 13 and clinical practice hasn’t yet found a cure for it, claiming that if a person is inflicted by the syndrome, chances are high that they will experience the symptoms several times throughout their life on observing other works of art elsewhere.

Stendhal syndrome is a rare psychiatric condition that occurs in bouts and can last for a lifetime. During its episodes, it disables its sufferers from carrying out even the simplest of tasks. However, it can be easily managed through therapy, medications, and relaxation techniques.

Stendhal Syndrome At A Glance

1. Is Stendhal syndrome a mental illness?

There is no scientific basis for categorizing Stendhal syndrome as a mental illness since it lacks sufficient research. Nonetheless, some brain regions are involved when exposure to art triggers disturbed emotional responses.

2. How long does Stendhal syndrome last?

Stendhal syndrome usually lasts for a brief period of time, typically 8–10 days since its onset.

There is substantial evidence that Stendhal syndrome is real, but it is not unique to Florence. Such strange “aesthetic sickness”—like India syndrome and Paris syndrome— is often a “cultural shock” and emotional distress experienced by people traveling to foreign countries.