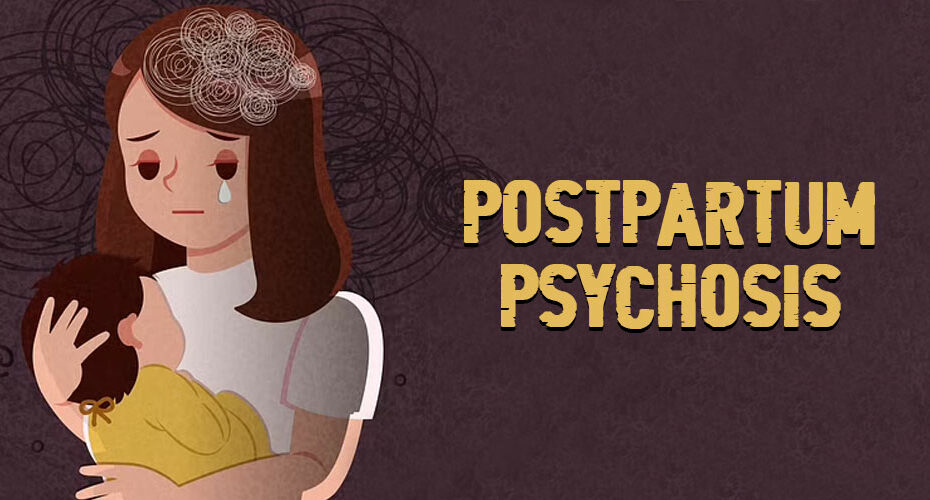 Postpartum psychosis (PPP) is a rare perinatal psychological disorder in which a mother experiences severe symptoms of psychosis after giving birth.

What Is Postpartum Psychosis?

It is considered a psychiatric emergency and usually requires pharmacological management and hospitalization. It is also known as puerperal psychosis and postnatal psychosis.

A condition that is often talked about in relation to postpartum psychosis is postpartum depression. However, the symptoms of the two are quite different from each other.

Women can be vulnerable to PPP throughout the perinatal period. However, in most cases, it typically occurs in first-time mothers within days of giving birth. If left undiagnosed or untreated, it can trigger serious cognitive and behavioral changes and is likely to cause deadly harm to the mother, the baby, and other members of the family.

Fortunately, postpartum psychosis is a brief and fleeting illness with high rates of patient outcomes and a good prognosis.

Consider the example of Trisha who got married at the age of 21 and gave birth to a child about one and a half years later. Although the pregnancy was not exactly planned, she was still looking forward to this new phase in her life. However, soon after the delivery, her family noticed that she was acting quite unusual.

A usually well-adjusted Trisha started having frequent mood swings. She also seemed to have an unexplained notion that her relatives and neighbors intended to harm her baby.

Her paranoia reached a point where she stopped letting anyone see the child and wouldn’t even let her mother-in-law carry her newborn. When her husband tried to explain to her that she might be behaving unreasonably, she completely lost her temper and accused him of being against her.

Trisha would often stay up almost the entire night watching over the baby. The lack of sleep further increased her disorganized behavior and she was beginning to get more and more forgetful and disoriented with reality.

Unable to understand what was happening with her and realizing that her behavior might have a negative effect on the child, Trisha’s family decided to consult a psychiatrist, who explained to them that she was affected by postpartum psychosis and prescribed medication for her recovery.

How Common Is Postpartum psychosis?

Postpartum psychosis is a severe psychiatric disorder that occurs in one or two out of 1000 child-bearing women 2 within the first 2–4 weeks after delivery. In fact, research 3 claims that it is not only the most severe but also the rarest of the three levels of postpartum mood dysfunctions, namely, baby blues, postpartum depression (PPD), and PPP.

Some common signs and symptoms 2 of postpartum psychosis involve:

Research 2 attributes the common risk factors and causes of postpartum psychosis to:

1. A history of mental disorders

Studies 1 reveal that women are prone to PPP if they have a personal or a family history of mental disorders such as:

Acute or chronic systemic illness increases a person’s vulnerability to PPP. Such illnesses include:

3. A history of postpartum depression

Results from a study further reveal that as high as 69% of mothers with a diagnosis of postpartum psychosis had given birth to a female child. Such a trend is seen mostly in countries like India, Pakistan, Bangladesh, etc.

Unwelcome pregnancies in families with limited financial resources 4 combined with dysfunctional family dynamics 5 and domestic conflict are likely to increase the risk of PPP.

Several other factors are associated with the onset of PPP, including:

Postpartum psychosis can negatively impact the mother’s quality of life—including her ability to enjoy motherhood, function normally, or form interpersonal relationships. If postpartum psychosis is untreated, its consequences are bound to be devastating. Some of these have been elaborated below:

1. Complications for the mother

PPP complicates the experience of motherhood. It triggers dangerous behaviors and cognitive disorders in mothers, often putting the mother, the child, and other family members at risk.

Mothers suffering from psychosis often lose touch with reality and enter a state of extreme confusion. In fact, PPP is related to high incidences of self-harm, suicide, and infanticide. To ensure the safety of the patient and newborn, immediate hospitalization is warranted if there is a risk of potential harm.

Postpartum psychosis disrupts the normal functioning 6 and relationship between intimate partners welcoming a child into the world. It contributes to domestic conflict 7 and strained interpersonal relationships within families.

3. Effect on the child

Much like untreated postpartum depression, PPP negatively impacts a child’s overall development. A mother suffering from PPP can (unintentionally) physically harm her own child and/or treat them abusively.

This can have long-term consequences on the parent-child relationship and contribute to post-traumatic stress in the child. In extreme cases, psychosis may lead the mother to take her own child’s life 8.

Postpartum psychosis can be clinically diagnosed as a ‘brief psychotic disorder with peripartum onset’ 9 as per the Diagnostic and Statistical Manual (DSM) 5.

It is usually diagnosed if the onset of psychosis was after pregnancy or within 4 weeks of delivery. However, it is sometimes diagnosed even if symptoms appear after 4 weeks but are found to be related to childbirth.

A clinical psychologist or a psychiatrist usually makes a diagnosis for postpartum psychosis after reviewing the symptoms and taking a detailed history of the patient’s complaints, previous illnesses, family relationships, and other aspects of her personal life.

There is a dearth of validated psychometric tools for assessing postpartum psychosis and most of the available scales mostly address symptoms of postpartum depression. Thus, the diagnosis is mostly based on clinical judgment.

An array of psychiatric medications 10 comprising mood stabilizers, atypical antipsychotics, and antiepileptic drugs is used to treat postpartum psychosis. Common drugs from these classes include:

While the use of prescription medication in postpartum psychosis treatment is considered typically effective and safe, certain drugs have severe side effects and these may raise concerns related to safety and tolerability. Some of the common side effects associated with pharmacological treatment in PPP include:

Electroconvulsive therapy (ECT) 11 carries tremendous benefits for patients suffering from postpartum psychosis. It is considered to be a safe and effective intervention involving minimal risk, especially in patients with acute relapse or an exacerbation of psychosis in the postpartum period.

Supportive psychotherapy might be most suited for a condition like postpartum psychosis. Most psychological interventions prove to be ineffective for PPP unless supported by medication. Cognitive behavioral therapy 12 (CBT) may be effective once the symptoms have been stabilized.

How To Give Support

If your loved one is suffering from postpartum psychosis, consider the following tips to help them while taking care of yourself at the same time:

While emotional dysfunctions like baby blues are common conditions that come to many new parents transitioning into a relatively unknown and more responsible life—postpartum psychosis is a severe and rare mental condition that warrants immediate medical care and hospitalization.

However, women with this condition respond fast to treatment. Furthermore, patience and support throughout the treatment and recovery processes enhance treatment outcomes in PPP.

1. How can you help someone with postpartum psychosis?

Postpartum psychosis is a severe mental illness and should be treated as a medical emergency. If you know someone who is suffering from it, persuade her to see a psychiatrist at the earliest. If the situation requires inpatient hospitalization, try supporting her family through the process.

2. What is the difference between postpartum depression and postpartum psychosis?

3. What is the difference between baby blues and postpartum psychosis?